With his popularity in California sinking like a stone, the Republican governor vows to battle global warming. 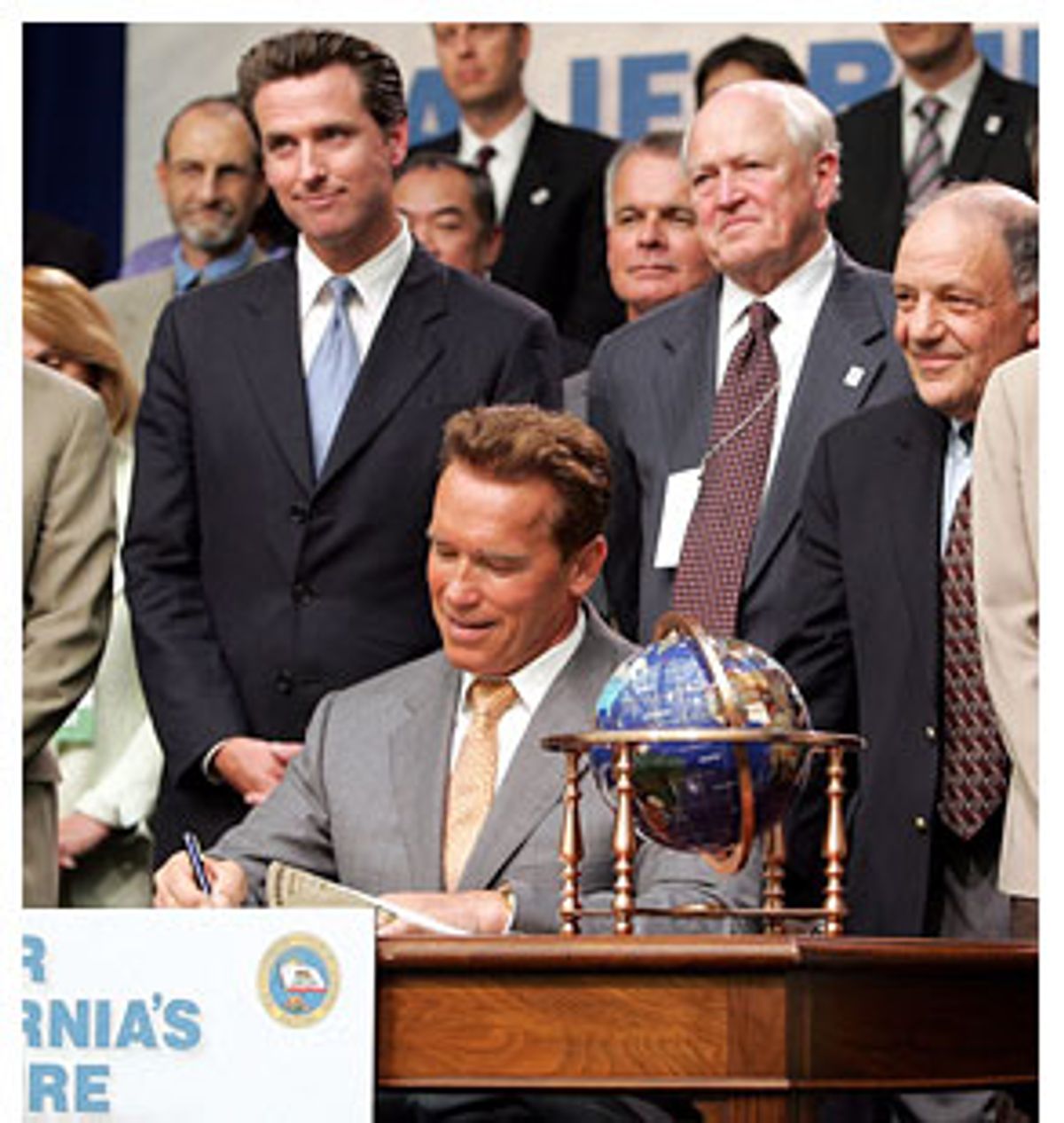 The governator wants to terminate global warming. And hes not afraid to go against his party to do it. Politically, it may be the best move the celebrity lawmaker has made in months.

"I say the debate is over. We have the science. We see the threat. And we know the time for action is now!" California Gov. Arnold Schwarzenegger told a rapt audience of hundreds of mayors, politicos, environmentalists and fuel-cell geeks gathered at San Francisco's City Hall on Wednesday afternoon for the first official day of the five-day green fiesta known as U.N. World Environment Day 2005.

If the state succeeds in meeting the goals, it will achieve reductions comparable to those of nations like France, Japan and the U.K., which are also among the top 10 world economies, according to the Union of Concerned Scientists, another green group. Most important, the state will far exceed the minor reductions the United States has in the works. The Bush administration continues to do an end run around global warming and ignore international treaties, like Kyoto, and the growing unanimity of world scientific opinion on global warming.

"As of today, California is going to be the leader in the fight against global warming," Schwarzenegger said. "We must leave a better world to our children and to their children." He threw down a green gauntlet for the visiting mayors and foreign dignitaries. I challenge everyone to match our commitment, he said. In the past, he added, the harmful impacts on the atmosphere of burning of fossil fuels were unknown. But now theres no excuse not to take action. "That was our mistake," he said. "But now we do know better. And if we don't do better, that will be our injustice."

On their own, environmental analysts said, the targets wont achieve much. "Targets are an important first step, but we have to quickly get to enacting policies to meet them," offered Jason Mark, director of the clean vehicles program for the Union of Concerned Scientists. Although Schwarzenegger didnt announce any new legislation aimed at meeting the targets, he did say that renewable energy laws would be key, such as the Million Solar Roofs bill currently wending its way through the state's Legislature.

Implementing California's groundbreaking reductions in automobile tailpipe emissions will also help meet the new goals. Last year, the state adopted the first greenhouse-gas emissions standards for cars in the world, which has since been emulated by states such as New York, New Jersey and Massachusetts. The California regulation is currently being challenged in federal court by the auto industry. The governor, who has been a big booster of hydrogen fuel-cell cars, also said that converting the states fleet of 70,000 vehicles to more efficient models would aid in meeting the new greenhouse gas targets, as will making state buildings more energy-efficient.

Environmentalists hailed Schwarzeneggers plan to put at least one state in the U.S. on track with the rest of the world when it comes to fighting global warming. Governor Schwarzenegger is addressing a challenge that affects Californias economy, environment and the health of its citizens," said Ralph Cavanagh, the energy program director for the Natural Resources Defense Council in a statement. "The paralysis on this issue in Washington, D.C., threatens the welfare of all Californians. We applaud the governors recognition that climate-change leadership goes hand-in-hand with a healthy California economy and environment.

However, said Mark from the Union of Concerned Scientists, simply turning up the dial on the states existing programs, like renewable energy and more efficient cars, would not likely meet the governors new long-term targets into 2020 and on to 2050. Nothing less than mandatory greenhouse-gas emissions caps for polluting industries, like power plants and factories, would have to be enacted. Those havent yet been on the table.

It remains to be seen whether Schwarzenegger's green plans remain more than a smart strategy to buy back his political capital with California Democrats. In recent months, some of his pet social and education reforms have gone down in flames in the Assembly, taking his poll numbers with them. Outside the gala event at City Hall, some 50 nurses, teachers, firefighters and other union members protested the governor's controversial cuts to worker benefits, carrying signs that read, "The only green that Arnold sees is money" and "Terminate the Terminator."

"None of the environmental stuff he's doing will impact any of his corporate donors," said Shum Preston, a spokesperson for the California Nurses Association, who was handing out fliers blasting the governor for loosening logging regulations, among other sins against the earth, to those exiting the governors event.

As invited guests repaired to a reception where they ate grilled salmon and asparagus in the rotunda of San Francisco's palatial City Hall, a gaggle of protesters succeeded in momentarily unfurling a banner from a second-story balcony that read "Arnold's greedy, not green." Schwarzenegger was unfazed by the protesters and never addressed them. Also, there was no word on whether he would convert his Hummers to run on hydrogen fuel cells.