Russell Crowe and Renee Zellweger get the talent knocked out of them by Ron Howard's heavy-handed approach to this boxing tear-jerker. 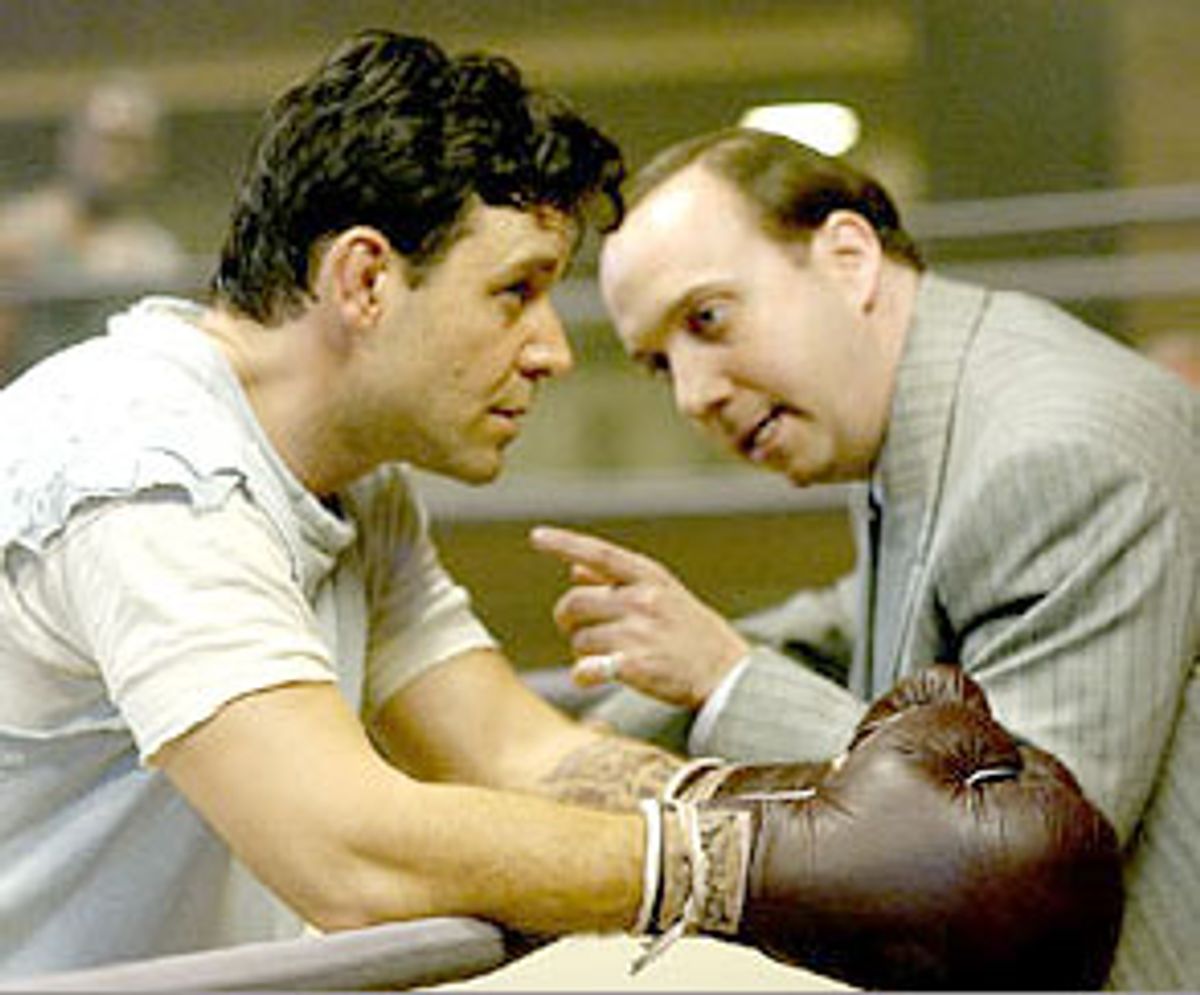 Why is it wrong to romanticize poverty but OK to fetishize it? Ron Howard's "Cinderella Man," which tells the inherently gripping story of James J. Braddock (played by Russell Crowe), an impoverished prizefighter who turned his luck around to become the world heavyweight champ during the Depression, can't just be a boxing movie, or even a movie about an interesting, principled guy who became a boxing legend. "Cinderella Man" is a movie about the indomitability of the American spirit, and those are always far less interesting than movies about actual people.

Like all movie creations fashioned from the smoke and mirrors of this vaguely defined American spirit thing, Braddock needs to overcome adversity, and so Howard catalogs that adversity in obsessive, tear-milking detail. A child gnawing hungrily on a papery slice of fried baloney, and then turning her huge moppet eyes toward her mother to ask if she can have more; a sad cluster of empty milk bottles to which the milkman has appended the sorry message "Past due"; a newspaper that lies crumpled in the mud, although the mud has very helpfully avoided obscuring the headline that screams "15,000,000 out of work." Why not just include a voice-over of some crusty old coot -- or at least David McCullough -- saying, "This was the Depression, kiddies, and let me tell youse, it was a helluva time"?

Howard fetishized mental illness in "A Beautiful Mind" and does it again with poverty here. Can cancer be far behind? "Cinderella Man" is ostensibly the kind of old-fashioned drama that sends audiences home with a satisfied glow. But like so many of Howard's movies, there's something canned and phony about it -- it left me feeling cooked and dehydrated, as if I'd fallen asleep on a tanning bed. By the time Howard got around to throwing in a priest who announces, "Missed you at Mass, Jimmy," I knew I'd seen it all, not just once but 1,000 times.

You can hear every beat in "Cinderella Man" even before it hits -- this is oompah-band filmmaking. At its core the script, by Cliff Hollingsworth, may not be so bad, but it's as if Howard went out of his way to make it as broad and obvious as possible. In the hands of a director with even an ounce of subtlety, Braddock's story would be pretty hard to mess up: In the late '20s, Braddock was an up-and-coming fighter who had never been knocked out. But he began losing matches, and he also lost whatever money he'd made in the stock-market crash. Braddock was practically forgotten until he reemerged in 1934, winning several fights that gave him a shot at the heavyweight title held by Max Baer. His defeat of Baer, in 1935 (he was the 10-to-1 underdog), was considered the greatest boxing upset in more than 40 years. In fact, Joe Louis said that until Sonny Liston refused to come out for the seventh round against Cassius Clay during their first fight in 1964, the Braddock-Baer fight was the greatest upset in the history of boxing.

How could any thinking creature not make a good movie out of that material? And yet Howard pulls off the near-impossible by messing it up. The fight sequences are edited so badly that we have a hard time seeing what's going on. One favorite trick Howard uses repeatedly is to show us the audience cheering and rising to their feet, making us yearn to see exactly what they're cheering about. (Since when are crowd shots more riveting than those of actual boxers?) He even mucks up the dramatic opportunities that are practically dropped into his lap. In the movie, Braddock sustains numerous injuries to his right hand during the low point of his career, which meant that when he came back, his left hand was even stronger. Howard could have shown us the moment Braddock realized that his left was now stronger than his right: I can almost picture Russell Crowe's face registering this revelation, and it's tantalizing. Instead, Howard drops this tidbit as a line of dialogue -- after the fact -- a classic case of telling and not showing, which seems to be Howard's stock in trade.

Howard's brand of filmmaking tends to flatten and distort Crowe's considerable gifts. Crowe's performance here is reasonably affecting: The look of muted anguish that crosses his face when he realizes his children aren't getting enough to eat -- and the look of bruised pride he wears when he has to approach some of his moneyed boxing cronies for a handout in order to pay the heating bill for his family's tiny apartment -- look like expressions he's worked on for hours, days, weeks, but they still manage to jab you where it counts. He's best in the scene that shows his first comeback fight: His face registers a series of shadowy but strong feelings, a blend of scrappiness and injured dignity. There's something in Crowe's Braddock that makes you want to see him beat the crap out of his opponent: He's made us believe wholeheartedly that he deserves victory.

Paul Giamatti, as Braddock's friend and manager Joe Gould, takes a potentially cartoony role and makes it breathe. Boxing fans should look out for Muhammad Ali's legendary trainer Angelo Dundee, in a small cameo as one of Braddock's cornermen. Renée Zellweger, as Braddock's wife, Mae, has the perfect period look -- her face looks like something off a 1920s valentine -- but her performance feels desperately homespun and folksy. (Generally a perceptive and vibrant actress, perhaps she, too, is hamstrung by the whole American spirit thing.)

Then again, few actors could survive the Ron Howard cliché pileup. Actually, the problem isn't that Howard deals in clichés and conventions in the first place. Conventions by themselves are fine, if they're used well. In fact, they can cut straight to our most unguarded emotions, which is what makes them eminently useful in the language of movies, maybe boxing movies particularly -- it's such a visceral and intimate sport. But while lots of people will see "Cinderella Man," it frustrates me that relatively few people have the chance to see a picture like "Beautiful Boxer," a recent Thai movie, a true story about a kickboxer who fights in order to save money for his sex-change operation. "Beautiful Boxer" may in some ways be just as conventional as "Cinderella Man." But its emotional kick is infinitely more resonant. ("Beautiful Boxer" didn't make it to many American theaters, but it's worth seeking out on DVD, provided you can lay your hands on an all-code DVD player, which I'm beginning to think is a must for serious movie lovers these days. Fortunately, they're available at reasonable prices.)

But "Cinderella Man" -- possibly a slight improvement on the dorkily cloying "Million Dollar Baby," but not by much -- is what passes for an American boxing movie these days. And so we suffer as, in one sequence, Braddock's children huddle in a dark basement, secretly listening to the radio broadcast of their father's championship fight. (Their mother has forbidden them to listen to the broadcast, as Baer has killed two men in the ring and she fears their father might meet the same fate.) We get not one, not two, but at least three -- I gave up counting -- shots of the upturned, anxious faces of these quaint period children. Much earlier, one of them, desperately hungry and fearing his parents will send him away, steals a salami from the butcher. The straight-arrow Braddock marches right back to the shop with him and makes the boy return it.

But what about the time Howard has stolen from us, movie after movie, year after year? Those are lost hours we'll never get back. It's time for him to make amends for robbing us of our time and exploiting our emotions with his bloated extravaganzas. Please, Ron Howard: Give back the salami.