"The Hidden Family" by Charles Stross

In this second novel in "The Merchant Princes" fantasy series, past, present and future collide as investigative journalist Miriam Beckstein navigates parallel universes -- and alters the course of history. 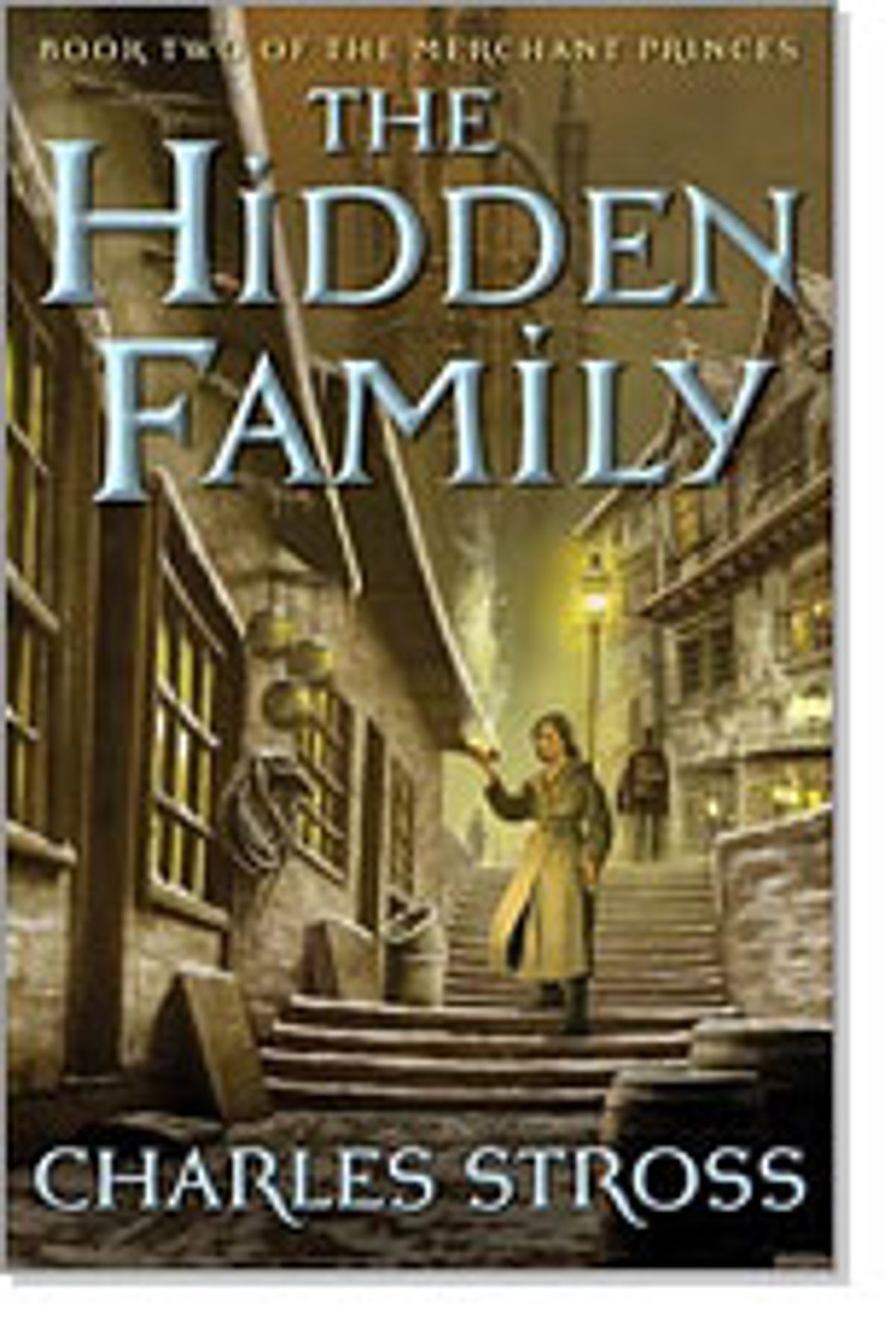 These days, finding a science-fiction or fantasy novel that doesn't feature a kick-ass babe who is either cybernetically enhanced, a martial arts master or a trained ninja killer (or all three) can be hard work. The genres don't lack for Buffyesque role models.

But there's something different about Miriam, the heroine of Charles Stross' fantasy series "The Merchant Princes." I read a lot of fantasy, and she's the first investigative journalist covering the biotech venture capital scene I've ever seen featured in a novel that also includes travel between alternate worlds and medieval feudal lords who pack submachine guns.

It's always a tricky maneuver, writing fantasy that attempts to connect the here-and-now world of the early 21st century to lands of magical make-believe. It's easy enough to suspend disbelief when embarking on a journey through George R.R. Martin's Seven Kingdoms or the Three Seas of R. Scott Bakker. We read such tours de force in part to escape mundane reality. Making a direct interface between the world of a journalist on deadline and a land of fantastical intrigue is almost an affront to the reader, directly posing the question: Come on, who would buy this poppycock?

It is a tribute to the budding powers of Stross, who works successfully in both the science fiction and fantasy genres, that he pulls off this feat in a fashion both amusing and gripping. It might be hard to imagine how the line "This isn't an attempt to sell you shares in some fly-by-night dot-com" would have any place in a fantasy novel, but in context, it not only works, but is hilarious.

There's more to the first two installments of "The Merchant Princes" -- "The Family Trade" and "The Hidden Family" (it is essential to read the first before the newly released second) -- than a plotline that focuses on a clan whose members have the ability to move between alternate worlds. There's also a breezy exploration of capitalism and industrial development -- Miriam's expertise covering start-ups is important, because her life-or-death struggle with mysterious enemies requires her to come up with a business model that works under some very strange circumstances.

Seriously, a crucial step in Miriam's plan to save the day in "The Hidden Family" is to introduce disc-brake technology to a backward world where Karl Marx was a crusader for democracy and the Industrial Revolution started about a century or two late. In a genre full of copycats, Stross is purveying that rarest of offerings, originality.

These are not novels drenched in magic. There really is only one fantastical element -- the ability of the members of one related family to transport themselves to worlds on a different historical timeline. This family cleverly exploits this power to set itself up as a trading company -- secret in our world, but economically dominant in its own land. Miriam, the journalist, turns out to be a member of the family who, for mysterious reasons, has been brought up in our world without any knowledge of her powers or origin.

Send an investigative reporter to an alternate reality, and you're asking for trouble. Miriam is a terrific character, turning the tables on all who would attempt to manipulate her, and setting in motion events that promise to transform the evolution of no less than three separate worlds. For those of us who actually are journalists working on deadline, Stross gives us an escape fantasy that is most seductive, indeed.