Reefer madness: Is sanity breaking out?

Despite the Supreme Court's ruling against medical marijuana and a scary proposed snitch law, America may finally be awakening from its decades-long stupor about recreational drugs. 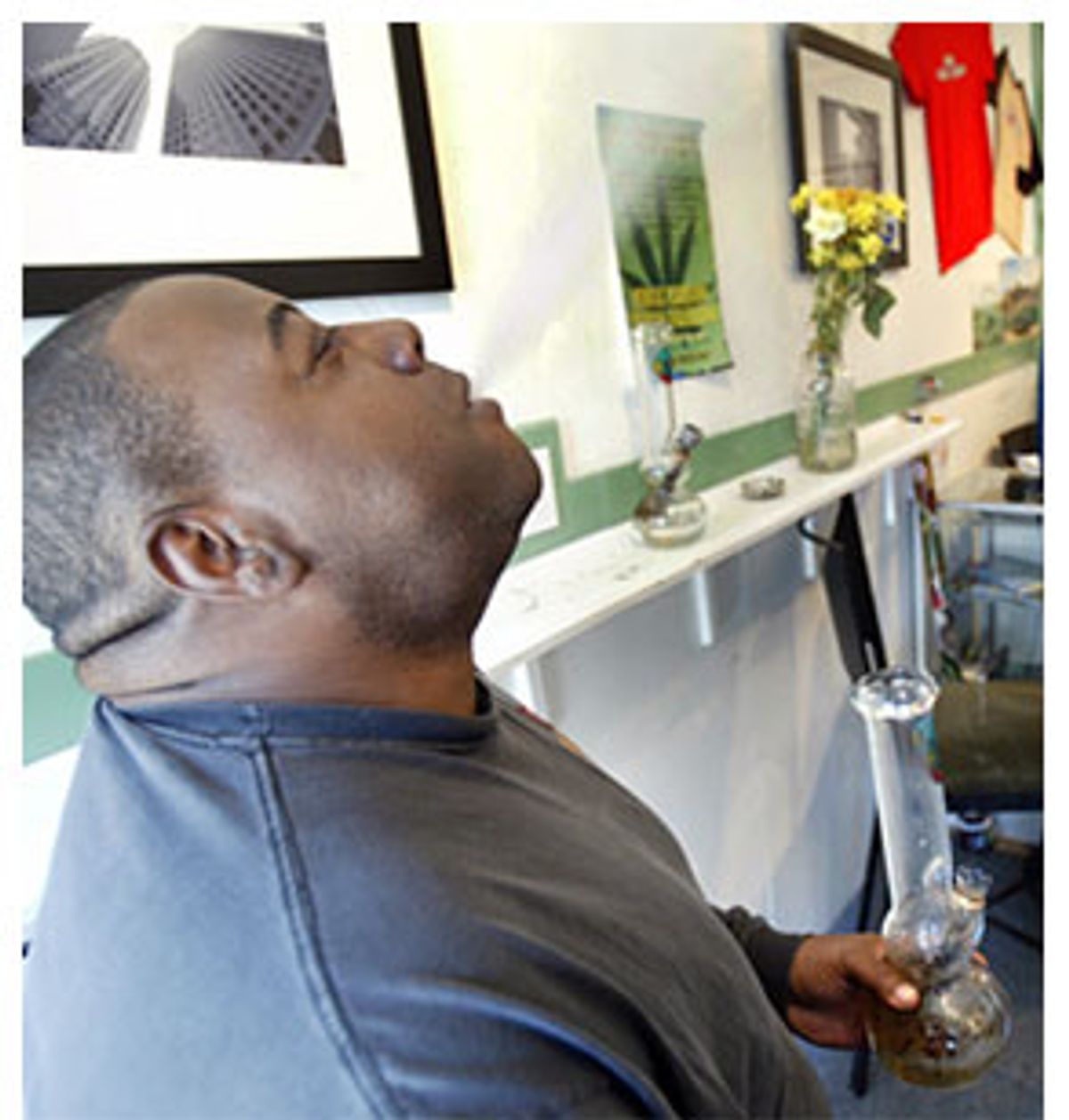 The battle over the war on drugs heated up several degrees on Monday when the Supreme Court, in a 6-3 decision, ruled that state laws allowing the medicinal use of marijuana don't protect patients from federal prosecution for use of a controlled substance, despite a doctor's orders. The case, Gonzales vs. Raich, was originally filed by two California women who smoke pot for medical reasons.

Medical marijuana advocates were quick to point out that although the ruling was a disappointment, it came with a surprising acknowledgment by the justices that medical marijuana users had made "strong arguments that they will suffer irreparable harm because, despite a congressional finding to the contrary, marijuana does have valid therapeutic purposes."

"While we're disappointed, the validity of state medical marijuana laws was never at issue in this case," said Rob Kampia, executive director of the Marijuana Policy Project in Washington, in a press statement. "The [state] medical marijuana laws ... will continue to protect patients from arrest by state and local authorities. Because [Drug Enforcement Agency] and other federal agents make only 1 percent of our nation's 750,000 marijuana arrests every year, patients in states with medical marijuana laws retain a high level of protection. Congress should act today to give those patients complete protection from arrest."

"In his opinion, Justice Stevens stressed the need for medical marijuana patients to use the democratic process, putting the ball in Congress' court," Kampia noted. "This is especially important now because next week, the U.S. House of Representatives will vote on an amendment that would prevent the federal government from spending funds to interfere with state medical marijuana laws."

The good news is that Kampia and other leaders of the drug-war reform movement represent an increasingly informed and politically savvy group -- including several members of Congress -- who have spent the past several years trying to do something about America's draconian drug laws. As a result of the Supreme Court's decision on Monday, they are stepping up efforts to draw attention to the Hinchey-Rohrabacher amendment, which will be considered this month as a part of an appropriations bill and, if passed, would prohibit the federal government from arresting, raiding or prosecuting patients who are abiding by state medical marijuana laws.

These reformers have also set their sights on another obviously needed legislative reform: repeal of the provision of the Higher Education Act that prohibits or delays the availability of financial aid to applicants with any drug-related misdemeanor or felony charge. The bill to repeal the provision (H.R. 1184), introduced by Rep. Barney Frank, D-Mass., this session, already has 66 cosponsors in the House. To date, the Drug Reform Coordinator Network estimates, at least 165,000 would-be students have been denied financial aid since the amendment took effect in 2000. If passed, the bill would represent the first full repeal of a federal drug law since 1970.

To Rep. Jim McDermott, D-Wash., denying students financial aid because they were busted for drug use or sales at some point in their lives looks more like a mental illness on a large scale than anything akin to an efficacious response to substance abuse. "The idea that we're going to prohibit people from using drugs is just a falsehood; it's just time that we stop what we're doing and try something else," McDermott, a nine-term veteran of Congress, told me at a Perry Fund event in Seattle last week.

As for the possibility of legalizing, regulating and even taxing certain illegal drugs, even the most forward-thinking of drug-war reformers have tended to stay away from discussing the idea in public, lest it seem too "radical."

But on June 2, the legalization movement gained an unlikely set of supporters -- specifically relating to marijuana, the most popular Schedule I drug. More than 500 leading economists, led by Nobel Prize winner Milton Friedman, called for the Bush administration to engage in "an open and honest debate about marijuana prohibition." Their move was in response to the release of a report on the budgetary implications of marijuana prohibition by Jeffrey Miron, a visiting professor at Harvard University. According to Miron's research, the legal regulation of cannabis would conservatively save $7.7 billion in law enforcement and criminal justice costs, while revenues for the government could range from $2.4 to $6.2 billion, depending on the type of taxation system.

Another radical leap forward in drug-policy reform came in Washington state in January 2005, when the King County Bar Association passed a resolution supporting the statewide legalization and regulation of psychoactive substances. The move followed a three-year period of intensive research into the historical, social, racial, legal, economic and fiscal considerations surrounding the drug war -- both in Washington state and throughout the United States. The resulting 145-page report, "Effective Drug Control: Toward a New Legal Framework," was hailed by a wide spectrum of mainstream organizations, including the Church Council of Greater Seattle, King County Medical Society, Washington State Psychiatric Association, Washington Society of Addiction Medicine, and Washington Academy of Family Physicians. And as a result, Democratic state Sen. Adam Kline is pushing for legislation to examine the possibility of a new legal framework for regulating illicit substances.

Other state bar associations (including those in Vermont, Oregon, Maryland and Hawaii) are beginning their own studies of revamped approaches to the drug war, according to Roger Goodman, director of the King County Bar Association's Drug Policy Project. The reverberations of the report have been tremendous, says Goodman, although he admits that getting gung-ho prosecutors and law enforcement onboard remains the biggest hurdle.

Aside from the need for legislative reform of drug laws, substance abuse treatment, special drug courts, and needle exchange and other forms of "harm reduction," activists point to the need for more-logical alternatives to the endless cycle of drug-related arrests and heavy-handed mandatory minimum sentences in the federal prison system. The inmate population has increased by 81 percent since 1995, and 55 percent of federal prisoners are incarcerated because of a drug offense, serving an average of three years and seven months. (For African-Americans, the average jumps dramatically to four years and nine months.)

Former prisoners with felony drug records can't access public housing, federal assistance for education, and many other social services, to say nothing of the permanent black mark against them when it comes to finding a job or getting back the right to vote. Is it any wonder that so many federal and state prisoners end up back in jail or prison?

The ridiculously costly war on the consumption of cannabis is clearly misdirected, as detailed in a May 2005 report by the Sentencing Project. Of the nearly 700,000 marijuana arrests in 2002, a shocking 88 percent were for simple possession. (The number of marijuana arrests far exceeds the number of arrests for murder, manslaughter, forcible rape, robbery and aggravated assault combined.) And the Sentencing Project estimates that 27,000 men and women are currently locked up for a marijuana-related offense. Legalizing marijuana would be an appropriate start to a long-term vision based on rational fiscal and public health policy.

If we're so worried about our kids' experimentation with recreational drugs, why aren't we pouring our resources into providing accurate information about drugs (alcohol and cigarettes being not only the most commonly used but the most obviously damaging as well) and into effective treatment programs for those who develop a destructive habit?

Unfortunately, and this is the bad news, American drug policy is still being shaped by political rhetoric rather than fiscally or medically sound strategies for keeping people healthy and out of trouble. For the latest and most egregious evidence of that, look no further than H.R. 1528, introduced this session by Rep. James Sensenbrenner, R-Wis., and named in classically Orwellian doublespeak as the Defending America's Most Vulnerable: Safe Access to Drug Treatment and Child Protection Act of 2005.

There hasn't been anything this scary in the already frightening reach of the American drug war in a long time. As written, this bill would create a new, three-year federal mandatory minimum for parents who witness or gain knowledge about drug activities happening around their kids and do not report what they know to the cops within 24 hours, or provide requested assistance to law enforcement in a resulting investigation, apprehension or prosecution. It would also create a 10-year mandatory minimum sentence for parents who commit a drug crime in or near the presence of their child, add a new five-year mandatory minimum sentence for anyone who sells drugs to someone who has ever been in treatment, and increase to five years the mandatory minimum for the sale of drugs within 1,000 feet of a school, library or drug treatment facility. That means just about anywhere in urban centers -- and especially in the concentrated inner cities.

The bill is fundamentally aimed at subverting important Supreme Court decisions about the unconstitutionality of federal sentencing guidelines by converting those guidelines into a new framework of mandatory minimums -- once again, with little or no judicial discretion possible.

Civil liberties groups like Families Against Mandatory Minimums, the ACLU, the Drug Reform Coordination Network and the Drug Policy Alliance are combining forces to raise awareness and prevent the bill from passing, but it's too early to say if their efforts will succeed.

Enough already. The ongoing war on drugs has reached into every echelon of society, dragging medicinal-pot smokers and would-be college students into the mix. And it has made the lives of millions of citizens more miserable than they ever would have been on their own as either recreational or habitual substance users. We certainly don't need another piece of regressive legislation to add to the damage by turning us into a nation of drug-war spies.

Silja J.A. Talvi is a freelance journalist and essayist. She received a 2005 PASS award for her feature on the impact of "three strikes" sentencing in Washington state and is an 11-time winner of regional awards from the Society of Professional Journalists. She is working on a book about women in prison.