"I'd never had so much pleasure with another human being," Anne Bancroft said of her husband, Mel Brooks. "It was that simple." We should all be so lucky. 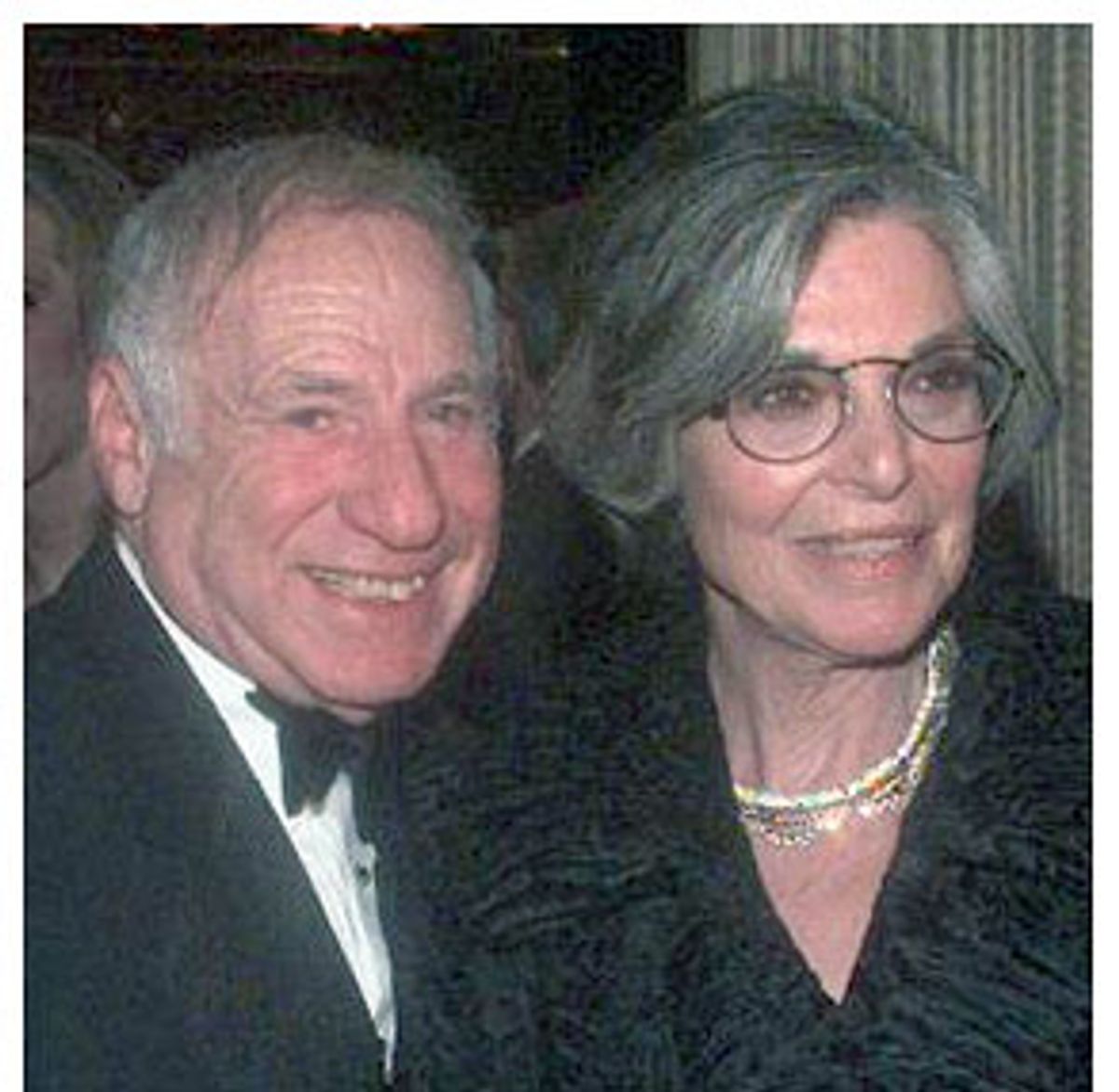 I try to limit my emotional reactions to celebrity deaths, because to me, crying for departed stars, no matter how much we admired them, is akin to thinking that we understand their lives after having read Star magazine. It's a false, prurient, intrusive sort of grief, and I try not to engage in it.

Funny then, that I've spent the past day weeping off and on for Anne Bancroft, a woman who should not, by all measures, have mattered to me much at all. She was never as big a star as my heroines Katharine Hepburn and Lauren Bacall and Bette Davis. I didn't see her decade-defining performance in "The Graduate" until the 1980s. I watched her movies, including "To Be or Not to Be," "The Elephant Man" and "The Turning Point" with my family as a kid. But I adored her; I wanted to be her.

More than that, I wanted to have her marriage.

I think that's what's kept me bleary-eyed since I read on Monday night that Bancroft died, and has affected me more profoundly than even the death of my personal icon, Hepburn, two summers ago.

I'm pretty loath to write about a successful, talented woman in the context of her relationship to a man, but this is the truth: I loved the fact that Anne Bancroft was married to Mel Brooks. I also loved the fact that she appeared to be whip-smart, talented in a way that's hard to even articulate, and very beautiful. I loved that he was funny, and shorter than she was.

I should preface this by saying that my knowledge of their marriage comes from reading what they've said about it publicly. I never laid eyes on them in person, though I did do a telephone interview with Brooks that left me with a cramp in my side from laughing. What a lucky woman that Anne Bancroft is, I remember thinking as I got off the phone, to be married to such a mensch. Last night, when I heard of her death, all I could think was: What a lucky guy that Mel Brooks is, to have been married to such a woman.

Maybe they were jerks; maybe they cheated and lied and didn't like each other. (Though I don't believe that.) But even short of that, marriages are endlessly complicated and I wouldn't presume that theirs was perfect. And yet, it seemed to be one that I could idealize from afar.

They had each already been married and divorced when they met in 1964. She was 32; he was 38. One version of the story goes that when he saw her rehearsing a musical number called "Married I Can Always Get" for the Perry Como show, he called out from offstage: "I'm Mel Brooks!" Another version has Brooks checking her out at the rehearsal, then paying a stagehand to tell him where she ate lunch so that he could bump into her accidentally. Oh, to be Anne Bancroft, having Mel Brooks catcall you from the audience.

Either way, Bancroft told a reporter in 1984 that the day after meeting him, she told her shrink: "Let's speed this process up -- I've met the right man."

Married for more than 40 years, Bancroft and Brooks appeared in three movies together, the heartbreaking Holocaust comedy "To Be or Not to Be," "Silent Movie," and "Dracula: Dead and Loving It." They had a son, Maximilian, who was born in 1972. They maintained separate careers that have made people happy -- and actually changed American culture -- for half a century: "The Miracle Worker," "Blazing Saddles," "The Graduate," "Young Frankenstein." Our lives would have been so much grimmer without them individually; imagine how much joy they must have brought each other.

In the 1984 interview, Bancroft explained her immediate certainty that she'd found "the right man" this way: "I'd never had so much pleasure being with another human being. I wanted him to enjoy me too. It was that simple."

What a stunningly spare way to sum up the kind of visceral, nuanced connection we all hope to find someday. She wasn't talking about fireworks, just fun and love and a sense that she had found her match. She makes it sound so sure; when I read those words I wanted to believe that kind of surety is possible for all of us -- whatever hardships and complications must inevitably follow.

But what struck me about a 1983 interview the couple gave to the "Today" show's Gene Shalit (and that was replayed this morning) was the complexity with which they talked about their union. I wasn't recording the show, and don't have a transcript, so my recollections are paraphrased, but when asked by Shalit if she loved her husband, who was sitting next to her, Bancroft actually paused. "I think at a certain point in a marriage, the word 'love' doesn't mean anything anymore," she said. So what do you feel for your husband, asked Shalit. "Contempt!" cracked Brooks. "Well, yes, sometimes," replied Bancroft, laughing. What she was saying was that over time, our youthful ideas of romantic love get shaded and transformed into something much richer, much deeper. She was expressing a state of union so refined, so aged, so nuanced that as I listened to her I scrunched up my eyes and hoped that someday I'll understand what she was describing.

But when Shalit, possibly misunderstanding her, pressed her on whether she was "content" with Brooks, she looked appropriately aghast. "I'm more than content!" she said. "When I hear his key in the lock at night my heart starts to beat faster. I'm just so happy he's coming home. We have so much fun." At this, Brooks began a riff on how every night when he walks in the door, he dons a party hat, throws confetti, and runs around the apartment to the cancan.

Silly, and so unbelievably sexy. Who wouldn't be anxious for Brooks to come home? And who wouldn't be thrilled to come home to Bancroft: the hot, statuesque woman who manages to look austere even, as she did in the Shalit interview, when spontaneously singing the first number from "To Be or Not to Be," a gut-busting rendition of "Sweet Georgia Brown" in Polish?

I've heard more than one news outlet mention that many people hadn't even realized that Brooks and Bancroft were married; theirs was never the kind of marriage that was splashed across magazine covers. I don't remember when I learned that they were together -- probably as a kid -- but I never forgot it. Here was a sturdy wisecracking broad, someone I could aspire to be like -- married to a guy who used to make soda come out my nose when I watched his movies.

What more could a little girl dream about for herself?

Last night, as news of Bancroft's death was previewed on advertisements for the local news, I was watching Diane Sawyer's interview with Brad Pitt, in which she attempted to quiz him on his defunct marriage to Jennifer Aniston and on his relationship with Angelina Jolie. Pitt has recently called his five-year union with Aniston "a success," though last night he appeared grunty and diffident about her, and about Jolie.

When we get embarrassed about the way we idolize celebrities, I wonder if it doesn't have to do with the fact that our celebrities are so often now of the Pitt mold. I was, last night, disgusted with myself for having cared even a little bit -- enough to have watched "Primetime Live" -- about news of Pitt and Aniston and Jolie's marital imbroglios. All the best to them, but what is there to admire, or aspire to, in them?

In Bancroft and Brooks, we had a couple we could be invested in -- even from a gawking distance -- without shame. They were a wonderful model, a worthy object of our fascination and adoration. And I hope it's not an intrusion into anyone's privacy to say that I am truly, truly sorry that their marriage has come to an end.