The revenge of Baghdad Bob

Bush's ludicrous statements about Iraq are increasingly reminiscent of the propaganda spouted by the former spokesman for the Iraqi regime -- except that they're not funny. 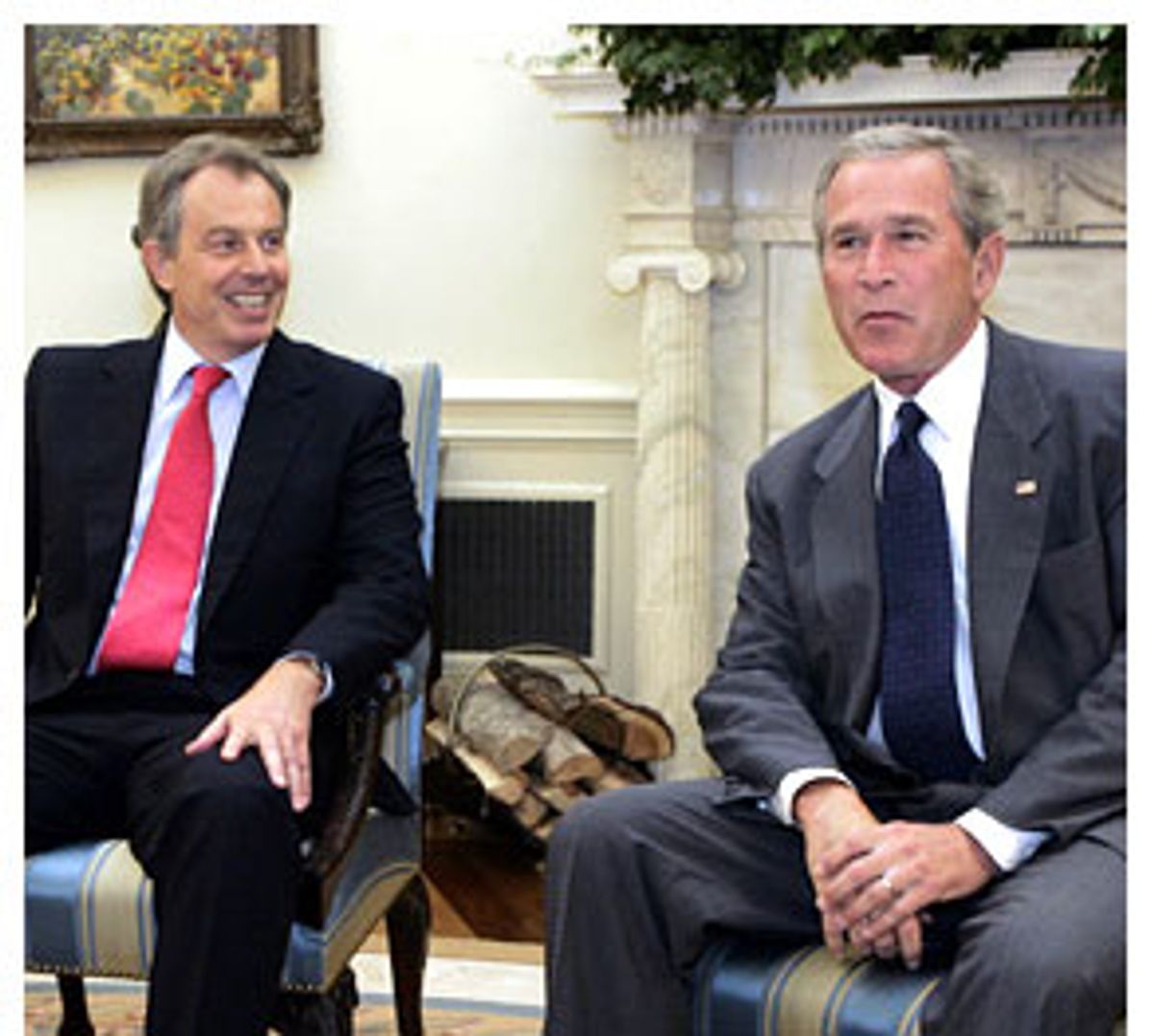 The sheer dishonesty of the Bush administration whenever it speaks about the situation in Iraq was on display again during Bush's Tuesday press conference with visiting British Prime Minister Tony Blair. In recent weeks Bush has repeatedly expressed wild optimism, utterly unfounded in reality, about the political process in Iraq and about the ability of the new Iraqi government and army to win the guerrilla war. He has if anything been outdone in this rhetoric by Vice President Dick Cheney. This pie-in-the-sky attitude, which increasingly few believe, degrades our civic discourse, and it endangers the national security of the United States.

With Blair at his side, Bush trotted out his usual talking points on Iraq, speaking of freedom and remarking, "This is the vision chosen by Iraqis in elections in January." Bush added, "We'll support Iraqis as they take the lead in providing their own security. Our strategy is clear: We're training Iraqi forces so they can take the fight to the enemy, so they can defend their country, and then our troops will come home with the honor they have earned." He again trumpeted his alleged policy of spreading democracy in the region as a way of combating the "bitterness and hatred" that "feed the ideology of terror."

The two leaders were finally confronted by the press corps with the leaked Downing Street memo, which reported that Sir Richard Dearlove, the head of the British intelligence agency MI6, had returned from Washington in July 2002 convinced that Bush had already decided on war. The notes of his report to Blair and British Cabinet members say, "Bush wanted to remove Saddam, through military action, justified by the conjunction of terrorism and WMD. But the intelligence and facts were being fixed around the policy."

It has gotten so that on the subject of Iraq, the way you can tell when Bush is lying is that his mouth is moving.

Bush is trying to give the impression that his going to the United Nations showed his administration's good faith in trying to disarm Saddam by peaceful means. It does nothing of the sort. In fact, the memo contains key evidence that the entire U.N. strategy was a ploy, dreamed up by the British, to justify a war that Bush had decided to wage long ago. It was the British who wanted Bush to go to the United Nations seeking an ultimatum that Saddam allow the weapons inspectors to return, in hopes that the Iraqi dictator would refuse. Foreign Secretary Jack Straw is quoted as saying at the July 2002, meeting, "We should work up a plan for an ultimatum to Saddam to allow back in the UN weapons inspectors. This would also help with the legal justification for the use of force." (Emphasis added.) Among the main fears of the British Cabinet members was that a war against Iraq might be considered illegal by the Hague tribunal, leaving them open to war-crimes charges. They felt that going to the United Nations would provide a legal basis for the war if Saddam rejected the inspectors.

So, his going to the United Nations does not prove that Bush did not want a war, and it does not refute the charges in the memo, since the memo accepts that it would be a good thing to go to the U.N. and a better thing if Saddam rejected the ultimatum. In the event, Bush did not give the inspectors time to do their jobs. They examined 100 of 600 suspected weapons sites and found nothing. Bush rushed to war anyway.

The docile White House press corps, which until the press conference had never asked the president about the Downing Street memo, predictably neglected to press Bush and Blair on those issues, allowing them to get away with mere obfuscation and meaningless non-answers. At the end of his response to the question about the memo, Bush simply repeated his mantra, "The world is better off without Saddam Hussein in power." For his part, Blair managed to assert with a straight face, "No, the facts were not being fixed in any shape or form at all."

The Bush administration's empty prevarications about the reasons they went to war are matched by their increasingly surreal pronouncements on the situation in Iraq. In an appearance on CNN's "Larry King Live" on Monday, May 30, Cheney said, "The level of activity that we see today from a military standpoint, I think, will clearly decline. I think they're in the last throes, if you will, of the insurgency." He went on to insist that America was safer as a result. As has become the Bush administration's modus operandi on a wide variety of subjects, Cheney simply made the assertion, giving no evidence to back it up. In fact, the guerrilla war in Iraq is far more active, professional and effective now than it has ever been. It routinely assassinates important government officials and has killed nearly 900 Iraqis in the past two months. May was as deadly for U.S. troops as last January had been, and it was the worst month ever for casualties among reservists.

Asked at a May 31 press conference about the wave of bombings that have bedeviled Iraq daily since the new government was formed in April, Bush said, "I think the Iraq government will be up to the task of defeating the insurgents." He said he was pleased with the progress and was heartened by the Iraqi government's Operation Lightning, which involved sweeps of Sunni Arab neighborhoods. But that operation has been plagued by charges that the new army ethnically profiled young Sunni Arab men, arresting them en masse rather than focusing on actual terrorists. As a result, it has increased Sunni Arab radicalism and anti-Americanism. And during the sweep of some Baghdad neighborhoods, violence exploded in other parts of the country, and bombings have not ceased in the capital itself.

The American public, according to a just-released Washington Post/ABC News poll, has not been taken in by the administration's Panglossian pronouncements. Nearly two-thirds of Americans believe that the U.S. military is bogged down in Iraq. Nearly 60 percent said that the Iraq war was not worth fighting. More than 40 percent thought the Iraq war had made that country "a new Vietnam." And 52 percent maintained that the Iraq war has not made the United States safer.

It is always dangerous to democratic values for there to be such a large gap between what the president maintains and what the people know to be the case. More urgently, the Bush administration's delusional state about the progress of its war suggests that it is incompetent to safeguard the nation's security.

Bush and Cheney declare that the guerrillas are losing and their numbers and activities are falling. This sunny position may temporarily help prevent Bush's falling poll numbers from sinking into the gutter, but it bears no resemblance to reality. The guerrilla war is threatening the entire American project in Iraq. The northern city of Mosul, with a population of over a million, had been quiet and relatively pro-American until November 2004. After the U.S. military launched its attack on the city of Fallujah, maintaining that it was a guerrilla center, enmity toward the United States spread rapidly across Iraq, and Mosul changed radically. Some 4,000 policemen resigned in fear of their lives, and Mosul became unstable and a site of continual guerrilla attacks.

Bush also misunderstands the significance of the Jan. 30 elections. Contrary to his hollow claims that the elections signaled the triumph of Iraqi unity, they were in fact a victory for sectarianism of a sort that did not exist in Iraq before the invasion. The Sunni Arabs, who largely did not vote, have only 17 members in the 275-seat parliament. They therefore are grossly underrepresented among the voting delegates on the committee charged with writing a new constitution, a situation that has contributed to the ongoing insurgency and threatens Iraq's future. The Shiites and Kurds both voted enthusiastically. The Shiite religious parties that had been close to Ayatollah Khomeini and the Iranian hard-liners swept to power in the Legislature.

And a highly dangerous phase lies ahead, as the new Iraqi government must decide how much independence to grant the Kurdish north. The future of the ethnically mixed city of Kirkuk, with its vast oil reserves, is a particularly volatile subject. If Iraqi Arabs and Kurds -- whose peshmerga are the most potent Iraqi militia -- are not able to reach agreement, the possibility of major clashes, even a civil war, cannot be ruled out.

And there is scant evidence to support Bush's claim that the war in Iraq is helping spread democracy in the Middle East, and no evidence whatsoever that the war is making America safer. The Egyptian elections are not going to be substantially more democratic. When democratic elections have been held, the results are hardly those that Bush and his neocon brain trust were hoping for. Elections in Lebanon, in which the militant Shiite group Hezbollah won overwhelmingly in the south, revealed the deep religious and ethnic fissures in that country. The postponed Palestinian elections are likely to increase the power of Hamas. The one-sidedly pro-Israel Bush administration has shown no willingness to deal realistically with either of those militant groups, and it has only recently and reluctantly adopted even a passive stance on the Israeli-Palestinian conflict. As a result, the single issue that most fuels anti-Americanism throughout the region remains incendiary.

Meanwhile, reports of Quran desecration and mistreatment of Muslim prisoners, including brutal killings, have brought rage at America to all-time highs throughout the Muslim world, including the strategically crucial nations of Afghanistan and Pakistan. The Bush administration is so hated that the very idea of American-style democracy is now tainted in the eyes of many Muslims eyes -- and not just radicals. It is difficult to see how this is making America safer.

As journalist Sarah Whalen pointed out in the Arab News, the increasingly effective guerrilla war has vindicated Baghdad Bob. "Baghdad Bob" (his real name was Muhammad Saeed al-Sahhaf) was the spokesman for the Iraqi regime who issued an endless stream of ludicrous pronouncements about how the mighty Iraq army was turning Baghdad into a mass grave for Americans, and so on. Today, many of his predictions, such as the one that the Iraqis would hurl "bullets and shoes" at the invading U.S. military, not bouquets of roses, have come true. But if imitation is the sincerest form of flattery, Sahhaf has been honored on a higher plane. His rhetorical strategy, of simply denying reality, has now been taken over by his arch-nemesis, George W. Bush.