An Ohio government scheme to invest public dollars in rare coins loses millions -- and all scandalous roads lead back to a Bush Pioneer. 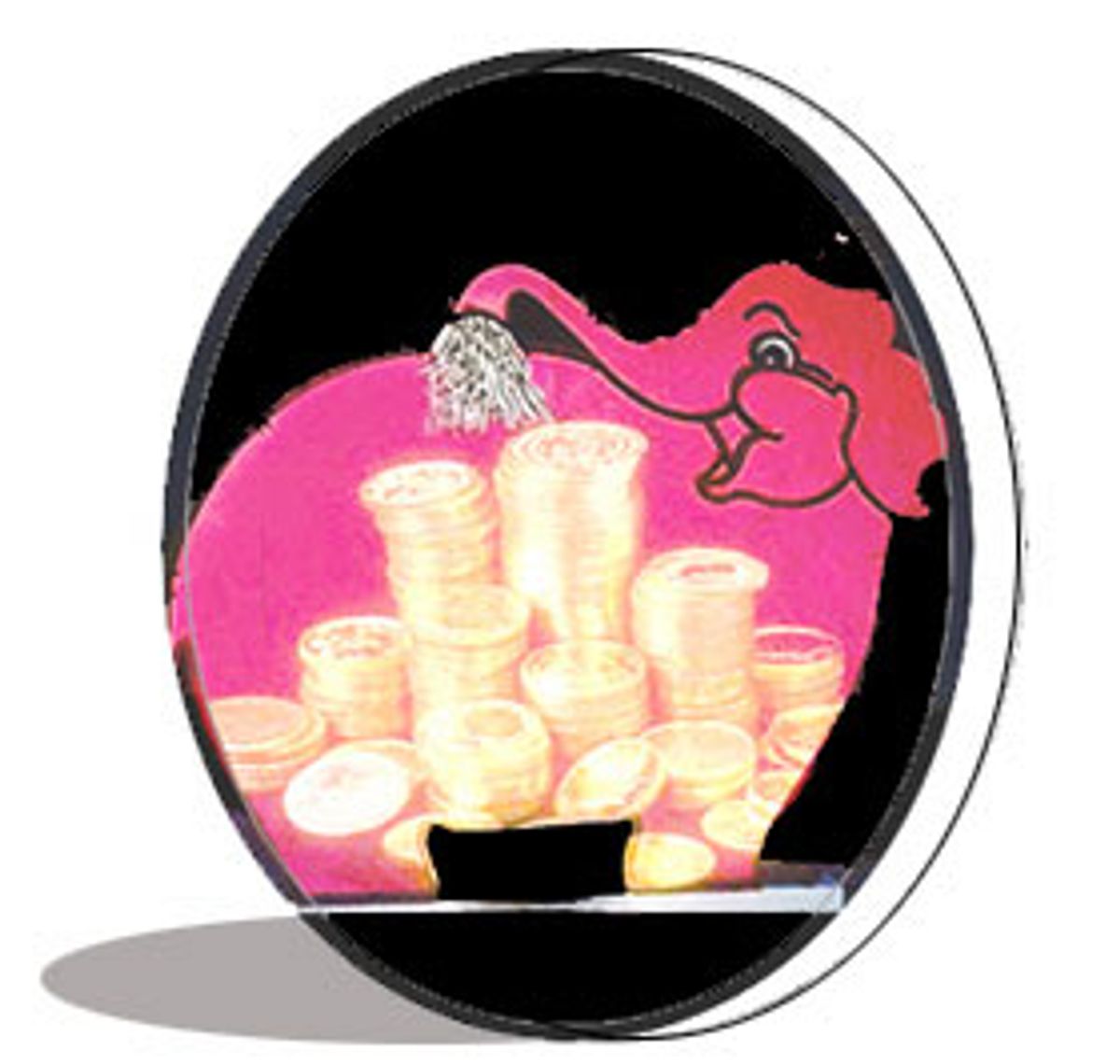 Before the 2004 presidential election, northwest Ohio was one of the most hotly contested regions in the most hotly contested of states. At that time, Republican insider, fundraiser and Bush "Pioneer" Tom Noe presided over George W. Bush's reelection campaign in Lucas County, which encompasses the city of Toledo. Noe, a Toledo coin dealer -- and former chair of the Lucas County Republican Party -- now presides over a Byzantine political scandal involving fraud with state money, political cronyism, alleged kickbacks and a federal investigation of illegal contributions to George W. Bush.

The "Coingate" scandal erupted when the Toledo Blade began reporting on Noe's contracts with the state to invest a total of $50 million in coin speculation -- apparently the only public investment fund of its kind in the country. Noe got the money, ostensibly, as an investment for the Bureau of Workers' Compensation, whose chief executive, James Conrad, recently resigned over the affair. In 1998, when Sen. George Voinovich was governor, Noe set up Capital Coin Fund to buy and sell coins on behalf of the state, with 80 percent of the profits supposedly going back to Ohio. Noe was given $25 million for the fund, and in 2001, he launched Capital Coin Fund II with another $25 million from the bureau.

The problem with Capital Coin, as detailed in the Blade's ongoing investigation, is that it operated with little to no oversight from the Bureau of Workers' Compensation or any other state agency. After weeks of media pressure and public records lawsuits, Noe's attorneys recently admitted that Capital Coin cannot account for $10 million to $12 million -- and this after Noe's repeated insistence that the funds were turning a handsome profit for the state.

It turns out Noe used the funds to invest in several subsidiary coin companies, one of which was run by Mark Chrans, previously convicted of laundering drug money through his own, separate coin business. (Capital Coin severed the relationship with Chrans as a result of $850,000 in bad debt Noe had to write off.) Also in the state's portfolio were other collectibles such as artwork, sports cards and autographs. When an auditor for the Bureau of Workers' Compensation flagged the coin deal in 2000 and cited the lack of oversight, he was ignored, the Blade reported.

At present, 121 coins from the funds are unaccounted for. Those coins are valued at nearly $400,000. Among the more egregious losses are two coins valued together at about $300,000: They were "lost" between Noe and one of his subsidiaries after supposedly being sent in the mail. According to an anonymous law enforcement source quoted in the Blade, records also show Noe bought one coin for $100,000 but sold it for $1.

On the heels of Coingate, news reports have revealed that the Bureau of Workers' Compensation lost $225 million by investing heavily in high-risk hedge funds. The executive in charge of this failed fund has also donated widely to political campaigns. The Blade reported on Thursday that the office of Ohio Gov. Bob Taft was alerted to the $225 million loss by the bureau in late October 2004, but Mark Rickel, the governor's spokesman, maintains Taft was not aware of this loss until the recent reports. Rickel is quoted as saying, however, that the governor was told in late September there was a $10 to $20 million shortfall in the bureau's portfolio.

The $225 million was reportedly lost between February and September 2004, months before Ohio tipped the presidential election in Bush's favor. Democrats are asking if Taft's office deliberately kept the losses quiet in order to avoid political fallout in the election. Rep. Marcy Kaptur, a Democrat who represents northwest Ohio, said, "I find it extraordinarily hard to believe that [Taft] did not know and the Republican leadership of our state did not know. Had this all come out beforehand, I think the election would have been more favorable to the Democrats -- I think it would have tipped the election."

When the Blade began digging in early April, Noe and his supporters -- including Taft -- dismissed the story as a "vendetta" by the paper. They repeatedly stated that the fund had been "profitable" for the state, as it "outperformed" the stock market. In an April 8 interview-turned-shouting match with the Blade, Taft was quoted as saying, "[Noe] was making money for the state; what's the problem?"

As it turns out, it's been revealed that Noe and his wife, Bernadette (who chaired the Lucas County Republicans through the election), have together given more than $200,000 to GOP candidates and PACs locally, statewide and nationally over the last 15 years. Among the list of Noe beneficiaries are Taft, Sens. Voinovich and Mike DeWine, Arnold Schwarzenegger and President Bush. Democrats, like state Sen. Marc Dann of Youngstown, suggest plainly that this played a large part in Noe's unusual contracts. "What we're talking about is a culture of corruption," Dann told the Blade.

Now that Noe's lawyers have admitted he can't account for perhaps $12 million, Taft and other top Ohio Republicans are putting distance between themselves and Noe. Taft, Voinovich, DeWine and even Bush are all giving back the money they got from Noe and his wife. Rickel says the governor is "saddened" and "sickened" to learn of Noe's mismanagement and says the state is looking into criminal and civil charges. Mike Wilkinson, one of the Blade reporters who broke the story, puts it another way: "Nobody's using the word 'vendetta' to describe our reporting anymore." Of Taft and the GOP's retreat from Noe, Wilkinson says they've "thrown Noe under a bus."

The missing coin fund money takes on added significance in light of a federal investigation that Noe is facing. A federal grand jury has been convened, the Blade reported, to determine whether Noe skirted campaign-contribution limits by giving money to associates to give to the Bush-Cheney 2004 reelection effort. The investigation into campaign violations started as a separate probe by the FBI, but came to light a few weeks after the initial media scrutiny into the coin fund. As one of Bush's fundraising "Pioneers," Noe raised between $100,000 and $250,000.

The big question is whether Noe took state money gotten through a Republican-sponsored scheme and then funneled it through illegal third parties to Bush. That's how it looks to Dann, the state senator: "It's more than a guess that some of the money could have made its way to the campaign committees of Republican officeholders, starting at Toledo city council and going up to Arnold Schwarzenegger and the president." Dann illustrates the depth of Noe's beneficiary list by pointing out that when he filed suit against the state to make it release documents pertaining to Noe's coin fund, five out of the seven Ohio supreme court justices had to recuse themselves since they'd all taken more than $5,000 from Noe.

Bart Kulish is a business associate of Tom Noe's brother-in-law. He reportedly told the Blade he was given immunity in exchange for his testimony before the grand jury looking into Noe's campaign contributions. Along with Tom Noe, Bernadette Noe and several other Republicans in question, Kulish attended a 2003 fundraiser with Joe Restivo (Bernadette Noe's brother), where Kulish and Restivo each gave $2,000 to the Bush campaign. Did Kulish get immunity to testify that Noe's brother-in-law -- or Tom Noe -- gave him the $2,000? Mike Wilkinson of the Blade says he knows the answer to that question but can't reveal it yet.

Noe couldn't be reached, but one of his lawyers, Bill Wilkinson (no relation to Mike, the reporter), wouldn't comment on the federal investigation of campaign contributions except to say that Noe is cooperating with the government investigations. Wilkinson said, "It's important to note that although there's a valuation shortfall [in the coin fund], Mr. Noe has not admitted any misconduct at all in relation to that shortfall." He went on to criticize some of the media attention as unfair. "There have been numerous reports I know to be inaccurate," Wilkinson said. "Some of the media coverage seems designed to prematurely persuade readers that Noe has committed some misconduct, before any investigation is completed." Wilkinson passed, however, on the opportunity to provide any specific examples of inaccuracy. Then, upon reconsideration, he retracted the claim of bias and said, "I won't make the claim. I don't need to do that."

The coin fund is currently frozen, and the state has taken over its management. Noe is facing a slew of civil suits and possible criminal charges. Last month, Noe "resigned" from his appointed post as turnpike commissioner and his seat on the Ohio Board of Regents, which oversees the public university system. (He was appointed to the Board of Regents even though he had dropped out of college.)

Michael Storeim ran the Colorado coin subsidiary where Tom Noe's fund "lost" the two coins worth $300,000. Since the scandal broke, Noe and Storeim have traded public insults and lawsuits, with Noe alleging that Storeim skimmed the fund. Reporter Mike Wilkinson finds it curious, though, that Noe never reported any of the losses related to the Storeim subsidiary even though he was aware as they happened; Storeim called a Colorado sheriff's office when the two coins worth $300,000 originally went "missing" in the mail in October 2003, but that was it. Just last weekend, a group of law enforcement officers raided Storeim's Colorado home and seized 3500 bottles of wine worth an estimated half million dollars. Also seized were hundreds of Cuban cigars and a number of coins. Colorado investigators are claiming that at least $36,000 of coin fund money was used to purchase the wine stash.

Dann thinks the evidence is "pretty clear" that Taft and other GOP leaders facilitated Noe's coin fund with the expectation that the money would be skimmed and cycled back to Republican coffers: "Anyone can understand you don't take money needed to pay injured workers' claims and invest it in rare coins. You don't invest with the guys that advertise on late-night TV."