Will the pampered elite finally show some respect for their fans at this week's U.S. Open, or will they throw their usual tantrums? 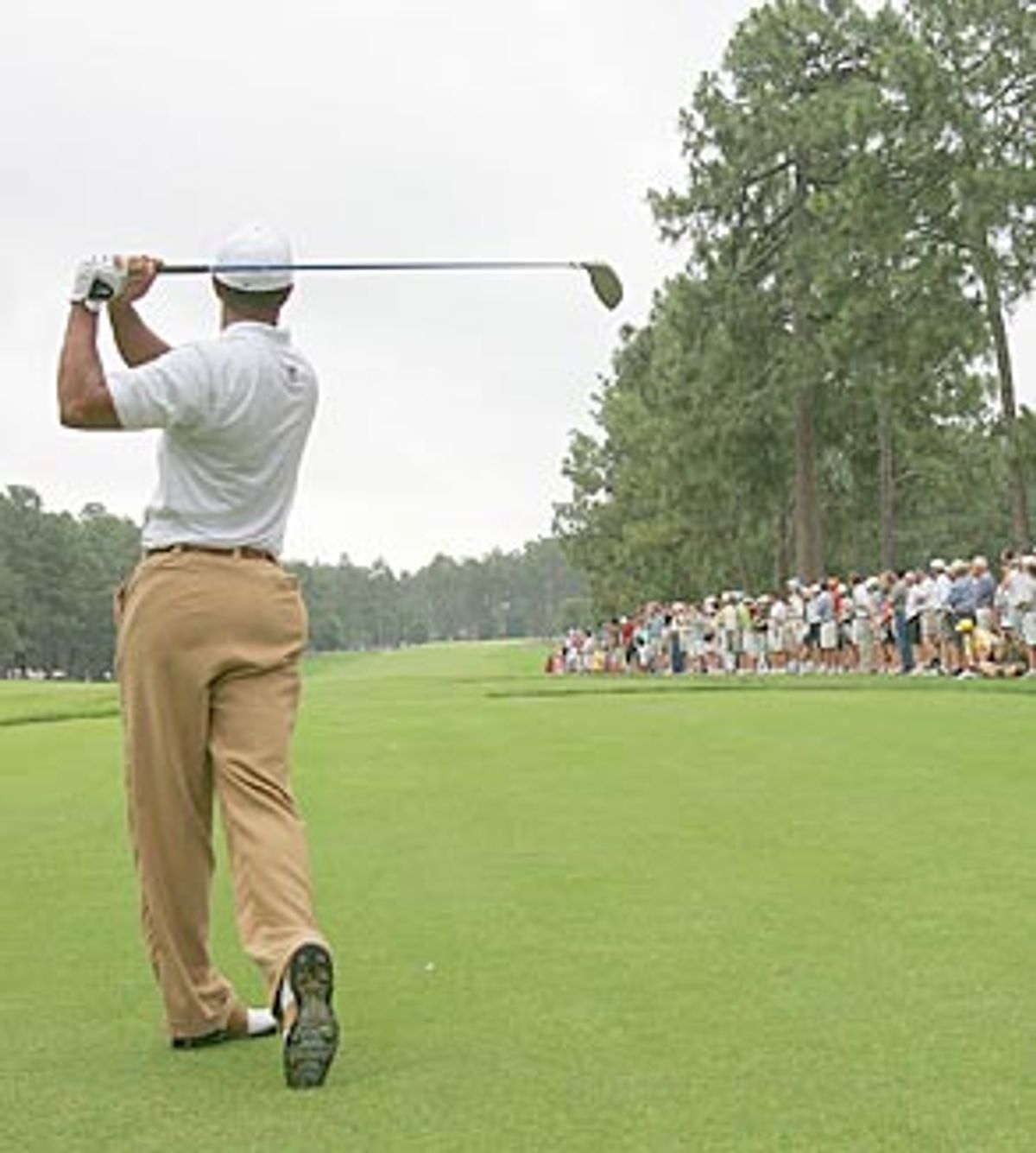 Golf, the Scots warned when they first took wooden shaft clubs to gutta-percha balls on the misty heathers, is a humbling game. For the humiliated professionals currently on the PGA Tour, whether cursed with thin skins or thick heads, it is no longer enough to deal with their over-par duffery by throwing clubs into ponds, as Tommy (Thunder) Bolt perfected the art in the 1950s. Today's touring pros throw tantrums, not 5-irons.

It's likely the tantrum set will be at it again at this week's U.S. Open in Pinehurst, N.C., on the storied No. 2 course. From Thursday to Sunday, the world's elite golfers, plus a few commoners who lucked out in qualifying rounds, will agonize their way over the kind of course not often seen on the regular PGA Tour, where 63s, 64s and 65s are as common as bogeys on par 5s are rare. In addition to the customary narrow fairways and gnarly rough found at all Open courses, Pinehurst has angular greens shaped like salad bowls, except the bowls are upside down and the salad is at the bottom of the hollowed slope where even the just slightly offline shots end up. Being on the green is no guarantee, either. In 1999, the last year that Pinehurst hosted the Open, John Daly putted off the eighth green -- and then was steamed that he couldn't get back on. He took repeated swipes at the ball, which kept rolling back to him. Finally getting atop the bowl, he holed out for an 11.

For Jose Maria Olazabal, venting at Pinehurst in 1999 after he opened with a frustrating 75 meant slamming his fist into a clubhouse wall. He broke his hand and was out of the tournament.

For those who savor gazing at golf stars suffering ego meltdowns, like people at NASCAR races who enjoy the crashes, the U.S. Open is the peak moment. Remember last June? At Shinnecock Hills on eastern Long Island, the world's finest golfers became the world's sorest losers. They whined about fast greens, they groused about hard fairways, they bemoaned pin placements -- all that foulness caused by the tournament's co-host, the U.S. Golf Association. The other host? God, who dared allow a gust or two of wind to break the balm of Gilead.

Shinnecock cold-cocked Tiger Woods, Ernie Els and Vijay Singh. These three demigods alone were 30 over par for the tournament. Twenty-eight players out of 66 couldn't break 80 on the final round. Among the humbled were Els and Spanish boy wonder Sergio Garcia. Both shot final-round 80s. But they took home $225,000 between them. Instead of taking the money and running, they took it and stayed -- to gripe to the media about the course that had proved them mortal. They should have remembered the oft-quoted line from the USGA: "We're not trying to embarrass the best players in the world. We're trying to identify them."

Touring pros, dour and unsmiling as they walk the course, rarely kick back to express outward enjoyment of their play. P.G. Wodehouse analyzed the breed well: "I have sometimes wondered if we of the canaille don't get more pleasure out of [the game] than the top-notchers. For an untouchable like myself, two perfect drives in a round would wipe out all memory of sliced approach shots and foozled putts, whereas if Jack Nicklaus does a sixty-four he goes home and thinks morosely that had he not missed that eagle on the seventh he would have had a sixty-three."

Whether literally or figuratively, golf is a walk for the pros. Among professional athletes, they are the most pampered. Enriched by lush prize money at the weekly tournaments -- fourth-place finishes alone earn about $250,000 -- even average players can afford personal trainers, psychologists, agents, investment managers and swing coaches. Players are lavished with equipment contracts. At tournaments, automobile companies -- Buick, Chrysler, Ford -- supply them with new cars for the week they're in town. In the Ben Hogan era, when purses rarely totaled above $20,000, pros worried about three things: lightning, unraked sand traps and talkative caddies. Now they fret about how fast their private jets will be cleared for takeoff by airport control towers.

Pros travel from one private country club to another, a self-enclosed world cut off from the ordinary irks of life. On occasion, they play at a public course like Pinehurst No. 2, which might as well be private, with its greens fees pumped to $315 and caddy fees at $68. Players who can hit shots on the money earn plenty of easy money by wearing corporate logos on their shirts, hats and golf bags. Fred Couples, a contender this week at Pinehurst, picks up spare change by bedecking himself with Cadillac on his shirt, Schwab on his collar and shirtsleeves, Bridgestone Golf on his visor, and Bridgestone lettering on his Brobdingnagian golf bag. Although this commercial trashiness hasn't sunk to the level of race car drivers suited up as billboards for everything from pizza joints to Viagra, the day is long gone when one could spot only a half-inch Izod alligator on the shirt of a touring pro.

The real pampering by corporate America begins early in the week, at the Monday outings funded by corporations. Name pros can command anywhere from $50,000 on up for enduring a round with CEOs and assorted high-handicap execs whose main problem in golf is that they stand too close to the ball -- after they hit it. Lesser pros, the ones who may have won the Tank Town Open 20 years ago, have to settle for what the market can offer: Ten grand is fine for a quick 18. The outings are relaxed affairs for the pros, who have no fear of finishing out of the money. Whether they shoot 65, 75 or 85, an appearance check is guaranteed. At most outings, minimum-wage club employees tool around the fairways in booze carts, pulling up to foursomes wanting the delights of the 19th hole on any of the first 18.

If that succoring is not enough, the pros are allowed to hang-glide high above still another of life's travails: noise. Total silence is expected from gallery-ites when players are about to swing. Hush, hush, little children, the Great One is deep in thought -- the train of it must not be derailed by the click of a camera, the jingle of a cellphone or the burp of a beer gut, much less the heckling, razzing or cowbelling common to other sports. When players go into their pre-hit routine of waggles and twitches, three or four marshals hold up "Quiet" signs, lest spectators forget where they are and bellow out, "C'mon Tiger, hit it a mile." Or the opposite: Cheering when Tiger hits it out of bounds, the way Red Sox fans go wild when Derek Jeter strikes out in Fenway Park.

A low-decibel peep is enough to get a pro glaring into the throngs behind the ropes. Nastiness may result. Woods, as tightly wound as his Nike golf balls, is so touchy about noise that his caddy-manservant, Steve Williams, has taken crowd control to new depths: snatching or kicking cameras out of photographers' hands, even before his master is over the ball. As in U.S. foreign policy, preemptive strikes are in order.

In addition to silence, motionlessness in the gallery is required. Caddies routinely yell at spectators to stand still while their man is about to putt, lest his sightline be ruined by a human being's muscle twitch 50 yards away. Pros who flub shots often gaze pointedly at spectators with accusatory frowns: "See what you made me do?"

This needs to be asked: What's so difficult about swinging a golf club or so rarefied about a golf tournament that the paying public can't sound off? Or move. Athletes in other sports can handle it. If basketball players shooting at the foul line aren't fazed by deafening roars or people waving funny sticks behind the glass backboards, why not touring pros when they're shooting for the green?

Preparation for the Open at Pinehurst began last week when the tour made its annual stop in the Washington area, this time at the majestic Congressional Country Club in Potomac, Md., for a tournament sponsored by Booz Allen, an international consulting firm. Congressional, as the name suggests, is the playground of political Washington. At the pro-am on June 8, more than 15 members of Congress teed off. None, including Tom DeLay, the reigning freeloader of Congress, had to pay the $6,000 entry fee coughed up by all other amateurs hot to play with a touring pro.

Founded in 1924 during the Coolidge administration by two Indiana congressmen, the club now has 1,100 members, about 250 more than the average U.S. country club. Congressional's initiation fee is $90,000, and there are 500 people on the waiting list. For decades the fee was waived for members of Congress, but with so many clogging the fairways for free golf, the practice ended in the early 1970s.

Today it's only presidents who get a pass -- up to a limit. During the first years of his presidency, Bill Clinton showed up so often that he became a nuisance. The Secret Service had to clear adjacent fairways, plus post sharpshooters at selected sites. Clinton preferred Saturdays, a crowded day, which meant the course had to be cleared for the presidential retinue. Clinton also had a disturbing habit of bringing along his relatives and pals, who paid no greens fees and chowed down for free in the men's grill. Finally, the club, its hospitality strained, had to strongly suggest that Clinton ease up. He was soon playing at the Army-Navy golf course or at Andrews Air Force Base.

In the first years of his vice presidency in the early 1950s, Richard Nixon gave Congressional a try. But he found the course -- long par 5s, blind shots over hills -- more torment than treasure. He went to the shorter, flatter Burning Tree Club two miles away -- a hideout of right-wing males who barred women from the grounds except the week before Christmas, when they could enter the pro shop to buy gifts for their husbands. The rule still holds. Nixon, socially stiff and not given to the 19th-hole card games that are a Burning Tree staple, found it easier to bond with the caddies. (One teenage boy in particular who idolized the vice president as his role model was Patrick Buchanan. They would travel the fairways of life together.)

Congressional is misnamed. It ought to be Networkers Country Club, so rife is the large membership with lobbyists, deal makers and favor seekers. Why labor to get access to politicians on Capitol Hill when you can invite them to the rolling and well-flowered hills of Congressional, there to slap backs, rub elbows and close deals -- and write off the golf, food and liquor as business expenses?

The Booz Allen tournament proved to be another pushover for the pros. Garcia, the winner, crushed Congressional with a final-round 66 and a 72-hole total of 270 -- 14 under par. Together the top 12 players were 116 under par. As happens at nearly every tour stop (except U.S. Opens), the pros humbled Congressional with countless eagles and birdies -- the easily caged fowl of pro golf. But now cometh Pinehurst, threatening to push the entitled ones out of their comfort zones. Once again, it's likely that the game will return to its Scottish roots, as an 'umbling game.