Who wants to pick up a soggy, hairy tennis ball after your pooch has retrieved it? With an ingenious throwing device, you don't have to. 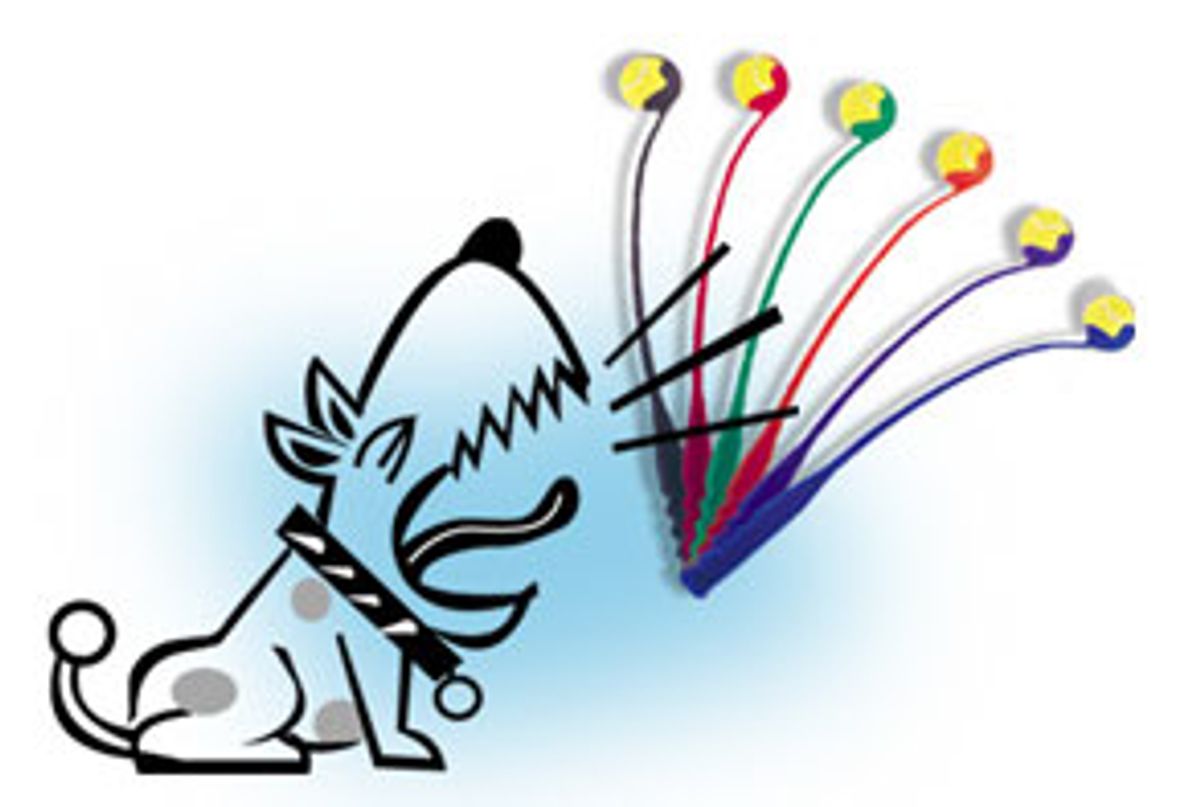 In a way, the whole business of exercising a dog seems a little silly, does it not? We think of dogs as so full of protean motion, so animal, that if we did not restrain them they would run forever, out of sheer joy. Do we not fear that if left to his own devices, the dog will run, wildly, for miles, and never return? Is that not why we leash them and fence them in? Yet an actual dog, left to his devices, often simply snores. He puts his paw on your foot as you sit by the computer and snores, twitching occasionally in sleep. Even when he twitches we say to each other, Look! He's dreaming that he's running, perhaps after a forest rabbit! In reality, he is probably twitching because he is dreaming of a bad Godard movie.

The truth is, you have to exercise your dog. If you do not exercise your dog, your dog may become fat. Not only that, but your dog may become an unpleasant companion -- farting, irritable, restless, unable to concentrate, rather like a human who has not gotten out of the house enough. Since dogs do not care to lift weights, do yoga or use the elliptical trainer, the simplest way to exercise a dog is to run the dog. To run a dog properly, however, one must persuade the dog that there is indeed something worth running for. That is not always as easy as it sounds.

Some dogs -- most retrievers, for instance -- are usually eager to chase whatever you throw. Throw anything -- a stick, an old tire, a washing machine, your aging aunt -- they will eagerly attempt to retrieve it. But other dogs, poodles, for instance, and other more thoughtful, ruminative breeds, weigh the pros and cons of running before undertaking the exertion. Some would be happy to run if you run right alongside them, but are not interested at all in retrieving anything.

I have two standard poodles; the dominant female will chase a ball but not necessarily retrieve it; the male, a far wiser animal, will not chase a ball at all. I think it depresses him, the repetitiveness of it. He's thought it through to the point of morose indifference. He will, however, sometimes chase the female poodle. The female poodle interests him greatly.

Anyway, if you can get a dog to run after thrown objects, you're on the right track. Then it's a matter of refining technique. One often sees people on the dog run carrying a tennis racket and hitting a tennis ball. That can work OK if the dog brings the ball back, takes out his white handkerchief, wipes off the ball and hands it to you. But if you have to remove the slimy ball from the dog's mouth with a stern "Drop it!" or pick it up out of the dirt after he drops it at your feet, you are then picking up a soggy, hairy ball covered with dog saliva, dirt, little decomposed leaves, burrs, and whatever else, including dog poop, that the ball may have landed in. So it's a little distasteful, all that handling of the slimy ball. Plus even with a tennis racket you can't launch a ball very far; not only are you usually using a dead ball and an old racket to hit, but in tennis, unlike in golf, few players hit for distance; it isn't a sound strategy, and the tools of the game are not constructed for it.

So along comes the Chuckit!, with which you can happily amble along, pick the ball out of the dirt without touching it with your hands and launch it at a surprising distance with relatively little effort or practice.

The Chuckit! is a 26-inch-long throwing implement made of flexible, lightweight plastic and shaped in a gentle curve like that of a banana. It has a handle on one end and a claw on the other end that, when pressed over a tennis ball, grips it with sufficient tightness to hold it until you raise it behind your shoulder and throw it, using an overhand motion rather like the motion for throwing a baseball.

The power and speed one can acquire with the Chuckit! is, I would imagine, due to the fact that the mechanics are somewhat like those involved in jai-alai, known as "the world's fastest game" because the ball has been clocked at an astounding 188 miles per hour. Unlike with a tennis racket, which must impart its energy to a motionless ball, in jai-alai (or with the Chuckit!) one accelerates the ball in a fluid motion and releases it at its moment of maximum velocity. The slight flexing of the Chuckit! seems to impart a little extra energy to the ball as it leaves its cup and soars above the heads of astounded fellow dog walkers.

The only drawback to the Chuckit! is that, at 26 inches, it can be a little clumsy to carry. There is a Chuckit! Jr. version that, at 18 inches long, you can put in your backpack.

When, as a relatively new dog "guardian," as we are referred to in San Francisco, I bought my first Chuckit! at our local pet store, I was served by a tall, somber, dark-haired woman dressed all in black. Her demeanor seemed to say, "I have seen everything and most of it was not worth seeing." When I put my money on the table she eyed me without a hint of irony, which is to say dripping with irony, and said in a low, deadpan voice, "Enjoy your Chuckit!"

I still sense that she was saying more than she let on, and yet, in my simple way, I continue to walk about the dog park, clutching my Chuckit!, launching muddy balls to the occasional amusement of these mysterious and wonderful creatures.