Growing up, I was terrified of my father's hair-trigger temper. So it was with surprise, and shame, that I found myself exploding at my teenage son. 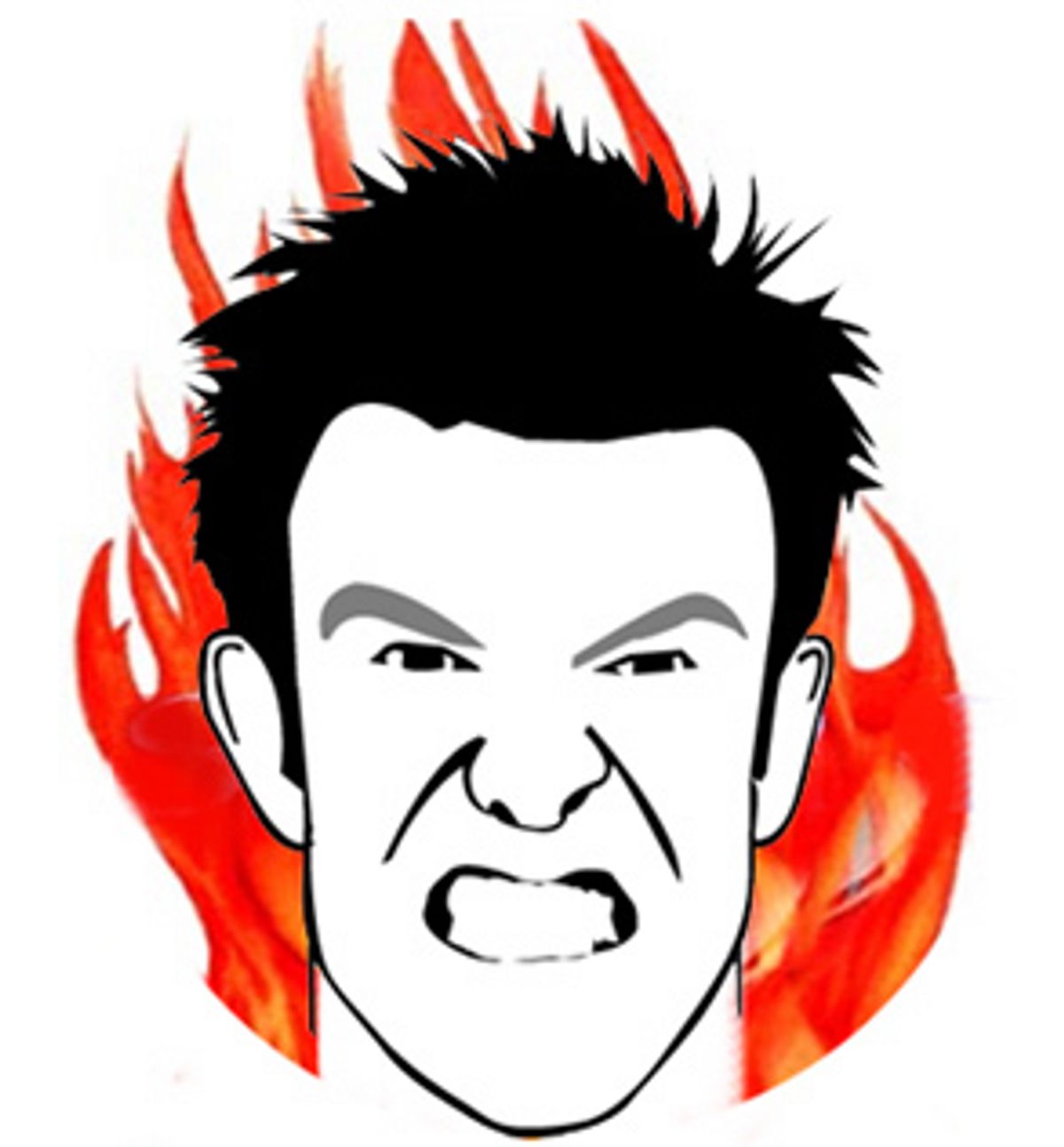 It's a fine Friday morning. My wife fries bacon in the kitchen as I lead our kindergartner daughter through her bathroom routine. In the living room, our son, a high school freshman, slouches on the sofa, reading the paper.

I hand my daughter, Emma, her toothbrush and spy a damp, green bath towel heaped on the floor, no doubt the property of her brother, Ben. It's frivolous, an errant towel, and should be no more than a nuisance on this glorious Wisconsin day. But it's the same green towel that was heaped on the floor yesterday, and the day before. Today it sets me off.

I snatch up the towel and stalk into the living room with the evidence.

He glances up absently from the sports page.

A smartass reply from a smartass 14-year-old. And normally I'd let it slide or come back with my own smartass reply. But he levels his remark at me with a look of such disdain -- a glower that I see more and more as he grows older -- that I lose it.

"Goddamn it, Ben." My circle of vision collapses. I can see no light, no detail. Only the smug scowl on Ben's face.

And it becomes my target.

I lunge for him. I tear the newspaper from his hands and hook him around the head with my arm, knocking him off balance and pushing his smug little face into the sofa.

He goes down without resistance, taken aback by the swiftness and force of my rage. And then he panics.

"Don't touch me! Get your hands off of me!" he spits into the cushion.

And in seconds, it's over. I release my grip and push away.

Ben springs to his feet and out of my reach. His ears are beet red. His T-shirt is hiked up his back. His glasses lie on the rug under a table. He looks at me for a long second, his face wracked with shock and utter, desperate hurt.

"I'm out of here," he mutters, his eyes damp and downcast, and he stomps out the front door, not bothering to retrieve his glasses.

I hover in the middle of the room, dizzy now, the adrenaline drained. And in the corner of my eye, in the hallway mirror, I see my reflection. Jaw tight, brow furrowed, eyes ablaze. The face is familiar. It's my father's face, the same face that raged at me so many times, so many years ago.

My father only made it to age 58. He died of lung cancer when Ben was 6, before his grandson really knew what made him tick. It has been up to me to explain to Ben the many sides of my father -- including the hair-trigger anger that eventually would be handed down.

My father's rules were rigid, his punishment swift. For the worst offenses, his discipline could turn corporal -- a "lickin'," as it was grimly referred to, exacted with a large, muscular hand, the hand of a carpenter.

Yet it wasn't the punishment that was most feared. No, it was my father's temper that planted dread into the hearts of my siblings and me. Sometimes the most seemingly harmless deed -- a bicycle left out in the rain -- would push him to the edge. He would explode in a roar, shouting us into obedience. When I reached adolescence, a gulf grew between us, widened by my rebellion and his temper. Time and again we would clash, battling over things both momentous and trivial -- the war in Vietnam, the length of my hair. My father would pace the kitchen floor, delivering a stern admonishment as I stood silently, leaning against the counter. Suddenly his rage would erupt, pinning me against the counter like a blast from a fire hose. I would take it, wordlessly, my arms crossed at my chest, despising him for his bluntness and shamed by his reproach. Then I would strike back, hollering into his face until, in a fit of frustration, I would bang out the kitchen screen door.

After the dust settled, my father would try to smooth things over with a touch of humor, using his playful teasing like a verbal mussing up of my hair. But there were no words of reconciliation, no discussion of the fury that had been unleashed. The dysfunction was locked away, never sorted out.

It wouldn't be fair to say my father had a mean streak. He was a bighearted man, willing to give his time to friends and family without complaint. He spent many hours with me, one on one, heaving a baseball high into the evening sky when he was dead tired from work. And when we moved to the parceled pasturelands of Milwaukee's western suburbs, he built a wooden footbridge over a creek that separated our backyard from our neighbors', a magnanimous gesture.

But sometimes the man boiled inside. And when the pressure became too great, he boiled over.

I have a photograph of my father as a young man. He is scowling at the camera, wearing a look of complete contempt that could stop traffic. I don't know what was behind that particular scowl, and I can only guess what fueled his rage later in life -- the strain of his job, of raising four children, of missed opportunities. He kept it to himself, lived with it, as so many men of his generation were prone to do. He buried himself in his work, his most loyal friend. I've seen that expression a thousand times -- on the face of my father, my brothers, and on my own face. Sometimes I see that same scowl on the face of my son -- and I feel accountable.

It has become my duty as my son's father -- and my father's son -- to cut the scorn and anger out of the family tree, as if it were a diseased limb or rotted stump.

But anger is hard to carve away. The roots go deep.

Ben has seen his own anger rise up from within. Weeks earlier, he roared at his sister when he found her rummaging through his desk drawer. "Stay out of my room!" he bellowed. "You can't just come in here any time you feel like it."

Ben's thunder frightened Emma and sent her running for her mother. He later apologized, all was forgiven, and we wrote it off as an adolescent mood swing. But I sensed it was more than that. It was anger inherited.

My scuffle with Ben over the bath towel casts a pall over our home. The next day, a Saturday, he repels my attempts to break the ice. But on Sunday, he reluctantly agrees to come along on a family day trip to an apple orchard.

Candy apples and a petting zoo draw Emma into the barn at the edge of the orchard, and my wife, Cathy, follows.

"Let's go pick some apples," I say to Ben, seeing my chance, and we wade through the field grass, the tall blades sweeping against our jeans.

We start with Harrelsons, pulling the lowest fruit from a squat, gnarled tree. The tree resists for a moment, its branch bending, then gives up the fruit, the branch flying back.

"Smells like rain," I say, studying the sky. But Ben says nothing.

"Maybe. Maybe I am." And he moves to another tree. "I just don't like being pushed around."

I hesitate, but I know this is the time for amends.

"That was wrong of me, Ben. And I'm sorry. It frightened me. Reminded me of my father."

Ben's eyes narrow and he waits for more.

"I need to work on my temper," I say. "The pressure builds and I just lash out at whoever's closest. There's no excuse. You've seen it happen, you've felt it yourself. Let's just try to let it go."

My son and I have talked about male rage and how hard it is sometimes to predict or avoid. But it has become easier for me -- for us -- to control it. With words instead of stubborn silence, it can be brought into the open, laid bare and the roots sheared, so nothing grows between us.

We move on to another apple tree, two paper bags nearly filled with fruit. Ben pulls down a Macintosh, bites into it. Then he sends the core flying. I turn, but not in time. The apple finds its target, my stomach.

"Oooff." I double over. Ben laughs at his precision and picks up another apple.

"Wait!" I call out, backing away and laughing myself. "Truce! Truce!" And he drops the apple.

A drizzle is falling. Raindrops spill down my face and I wipe my eyes with my sleeve. In the distance, Cathy is calling.

"Come on. It's starting to rain, we've got to go. What are you guys doing?"

We grab the apples and make a beeline to the barn.

Kurt Chandler is a journalist, author and editor. Drawn to stories about complex issues and complex characters, his profiles, essays and nonfiction narratives have been published in numerous newspapers and magazines, from The New York Times and The Denver Post, to Marie Claire and Milwaukee Magazine.