As Coldplay's Chris Martin cozies up to Tony Blair, a nation's once proud pop music becomes the sound of its bland, middling, centrist government. 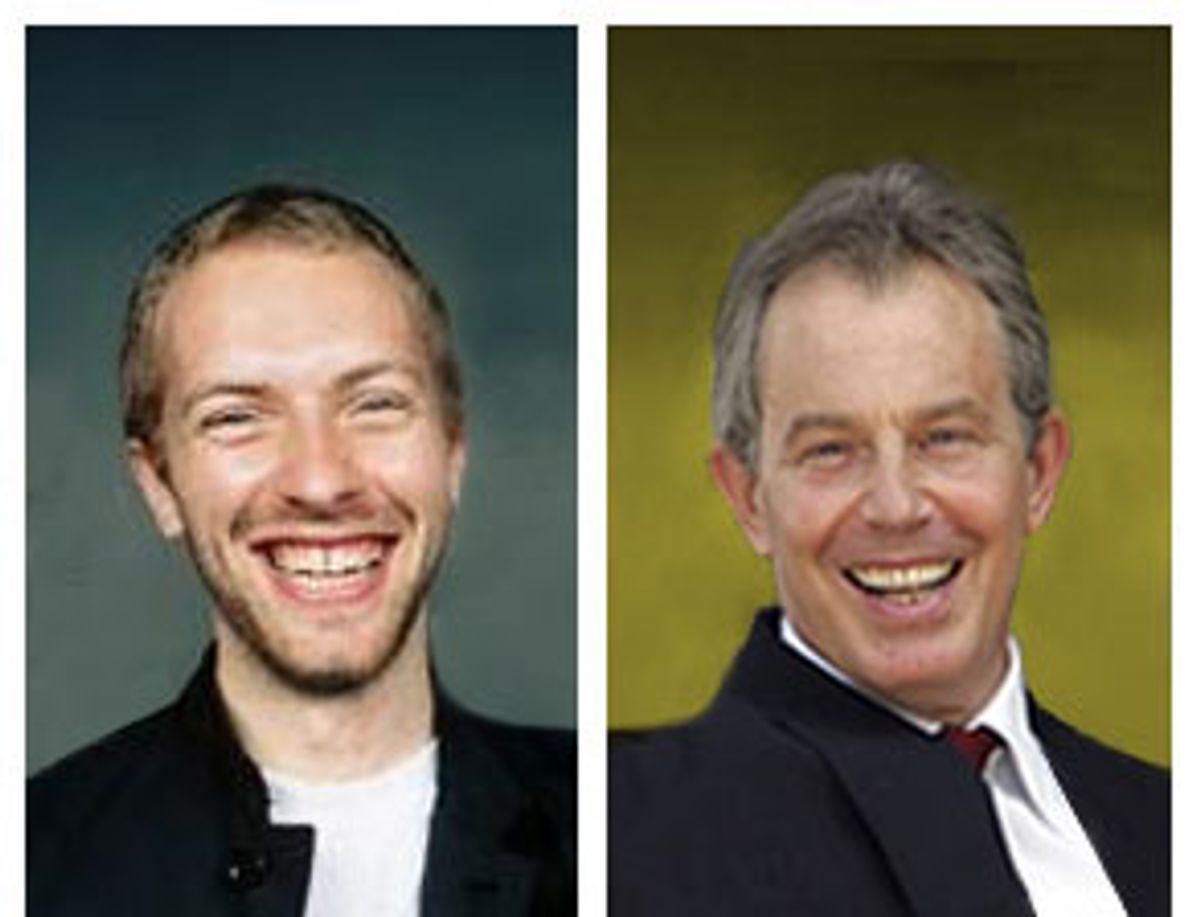 Imagine if the biggest rock band in the United States was fronted by someone who looked and sounded just like George W. Bush. Worse, by someone who was from the same social caste as Bush and who thought that everything Bush does is "BRILLIANT." So BRILLIANT, in fact, that said rock star offered Bush his cell number with an invitation for him to call if he ever felt like chatting about world poverty, or world peace, or fancied being taught how to play a mean F-chord on guitar. You would think that was weird, right? Especially if you associate rock with rebellion -- with the guitar-smashing antics of the Who or the anarchic shenanigans of the Sex Pistols -- and not with schoolgirlish sucking up to the biggest Boss Man of all.

Well, now you know how music fans in Britain must feel: Our biggest stadium-filling rock star is becoming indistinguishable from our Dear Leader. Chris Martin of Coldplay is morphing into Tony Blair of 10 Downing Street. And the rock-politics love-fest imagined above is a reality over here. Martin really did send a hand-written note to Blair, via a journalist, that said: "Dear Mr Blair, My name is Chris; I am the singer in a band called Coldplay ... I think all the stuff you're doing this year in terms of trying to sort the whole place out is BRILLIANT. The Make Poverty History campaign that you're behind is not just a slogan, it's a real possibility, and myself and most of my friends feel like you're one of the only politicians on the world stage who actually wants to achieve it." Martin also offered Blair guitar lessons and wrote down his cell number and, sure enough, he received a call from Blair's people a few days later. Are you barfing yet?

Martin is the rock star Blair once dreamt of becoming, and Blair is the kind of middle-aged man Martin is destined to become. They look alike: Both have thinning hair and possess overly toothy grins. They sound alike, speaking in the stuttering, self-effacing, slightly slangish tones adopted by the British upper middle classes, who are increasingly embarrassed by their wealth and privilege. (The singer Dido -- full name: Dido Florian Cloud De Bounevialle Armstrong -- does this "slumming it" accent wonderfully.) Blair and Martin had similar upbringings: Blair attended the solidly middle-class private school Fettes College in Edinburgh, Scotland (which costs each student a cool 20,200 pounds/$37,000 a year), and Martin went to Sherborne School in Dorset (22,785 pounds/$41,800). Both went on to Ivy League universities -- Blair to Oxford in the 1970s, and Martin to University College London in the 1990s -- where they founded bands: Blair was the lead singer of Ugly Rumors, a short-lived, maudlin, rock cover band; Martin set up a somewhat more successful group.

Both have quirky wives who have reportedly turned their stiff British husbands on to the spiritual side of life. Cherie Blair -- despite being a top barrister and also a devout Catholic -- has become infamous for her dalliances with New Age nonsense: She reportedly wears crystals to ward off the evil effects of computers and telephones, and in the summer of 2001, she and Tony took part in a sweaty, muddy Mayan rebirthing ceremony while holidaying on the Mexican Riviera. Martin's wife, the Hollywood glamourpuss Gwyneth Paltrow, has been known to indulge in alternative therapies such as cupping, a form of acupuncture that seeks to ease stress by manipulating the movement of blood, energy and fluids around the body. Both Paltrow and Martin are now celebrated vegans, and apparently held a vegan feast for their daughter Apple's first birthday.

Coldplay are to music what Blair is to politics. Blair gave us the Third Way, a new politics of compromise and caution that was neither full-on capitalism nor socialism, neither right nor left, but something in the middle. Likewise, Coldplay have given us a new kind of music that is neither rock nor experimental, but something closer to the middle of the road.

As music writer John Harris pointed out in Mojo magazine recently, Coldplay got to where they are today with "their own version of the Third Way": "To their right sat Oasis, and the iron rule whereby writing your own 'Wonderwall' remains the key to any kind of large-scale success. To their left lay Radiohead: prickly, millennial, set on somehow crystallizing the confusion and sensory overload that defines the modern experience." Indeed, listening to Coldplay's new album "X&Y" is a lot like listening to a speech by Tony Blair: You're made to believe that you are hearing something Big and Important, but scratch the surface and there is very little heart or soul underneath. When he's giving a public speech, Blair's theatrical glottal stops and pained expressions say, "Listen to me, I'm saying something profound!" as do the epic guitar riffs and Martin's earnest vocalizing on "X&Y." But both Blair's and Coldplay's performances feel too forced and formulaic to be taken seriously: Blair in public-speaking mode comes across as an actor trying too hard to please, while Martin and Co. seem to have written their latest Big Tunes by rote, conspiring to get the audience waving our lighters in the air whether we want to or not. As Harris says, Coldplay is now writing "anthems for anthems' sake."

Rock traditionalists went ballistic when Noel Gallagher of Oasis -- who, together with his brother Liam, was considered one of the bad boys (in a good way) of British rock -- took tea with Tony Blair following New Labour's electoral victory in 1997. They said it was the end of Britpop, the indie rock scene that flourished in the mid-1990s, when bands such as Oasis, Blur, Pulp, Elastica, Ocean Color Scene and Suede hit the big time. But Gallagher's brown-nosing trip to Downing Street is nothing compared with what we have today: a band that emulates Blair, that looks and sounds like Blair, and that thinks Blair is BRILLIANT. We've gone from Britpop to Blairpop.

It isn't just Coldplay: British music is awash with bland bands made up of upper-middle-class kids who mean well, don't drink or do drugs or even smoke, and who would make perfect company at a soiree in Downing Street. There is Keane, three men and a piano, who are named after the housemistress at Tonbridge School, which they all attended (and which, with fees of 22,100 pounds a year, is on a par with Blair's and Martin's alma maters). On drink and drugs, Keane say: "Why should we get falling-down drunk all the time just to fit in? Drugs have never been our thing. I'm sure fear plays a part." It's hardly Anarchy in the U.K., is it? Franz Ferdinand, made up of four polite, skinny Scots, are at least a bit more experimental than Coldplay and Keane, but they are also Very Responsible Young Men: Under the headline "Franz Slam Groupie Sex," they recently announced that "we are really not into the whole sex thing with groupies," because they consider sex with fans to be a "form of abuse." Tell that to Mick Jagger. Travis, another middle-class, middle-of-the-road, middling British band, which had self-pitying hits such as "Why Does It Always Rain on Me?" and "Driftwood," released an album whose title unwittingly summed up what these responsible, well-behaved, no-sex, no-drugs and no-booze bands are like: It was called "The Invisible Band," and the cover featured the four band members blending into a forest background, almost as if they were apologizing for existing.

Radiohead, an inspiration to these bands, is, if anything, even more conservative. Last year, a survey of British politicians' musical tastes revealed that David Cameron, then policy coordinator of the disgraced, discredited, right-wing Conservative Party, loved to listen to Radiohead. Some people were shocked to hear that (Thom Yorke, lead singer of Radiohead, was no doubt one of them); I wasn't. Radiohead's conservatism may be of the radical planet-saving variety and David Cameron's of the capital-C, old Tory variety, but both are conservatives; both are concerned with getting us to behave in what they deem to be an acceptable and responsible manner. Yorke has become the unofficial spokesman for the anti-consumption lobby of late, constantly telling his fans to shop less, watch less TV, and stop doing things that might in some small way damage the environment. He describes supermarkets as being "very, very naughty" and writes of his "paranoia about chemicals, global warming etc." What would he have made of something like the Rolling Stones' big free gig in Hyde Park in 1969: all that drug consumption, those empty beer cans tossed onto the greenery, the occasional outbursts of violence? My guess is that Yorke would not have approved.

In place of the abandon, over-consumption and excess of earlier bands -- the Stones, the Who, the Sex Pistols and the Happy Mondays, to name but four -- we have the priggish caution of middle-class brats who play safe music in safe environments for a mix of teenagers, twentysomethings and thirtysomethings. Even when a British rock star does go off the rails -- I'm thinking of Pete Doherty, former singer with the Libertines who now makes headlines for having a heroin habit and a supermodel girlfriend (Kate Moss) -- it seems to take place within strictly defined limits. Doherty is constantly apologizing for his drug habit and promising to get back on the straight and narrow. He even -- get this -- appeared on "Newsnight" on BBC TV, the highest-brow news program in the U.K., and told the British nation that there was nothing "romantic" about doing drugs. It was a corny, Nancy Reagan-esque "Just Say No" message for our times, though in this instance uttered from the mouth of a drug-damaged individual rather than by some snooty politician.

This blanding of the British music scene has happened before. In the '70s, Prog Rock ruled, as self-important bands like Pink Floyd, Yes, King Crimson, Jethro Tull and Genesis bored a nation to tears with their earnest and over-long songs. But the punks came along in '76 and told the Prog Rockers to fuck off. Surely there is another Johnny Rotten or Sid Vicious out there, watching the rise of Coldplay, Keane, Radiohead and the rest with great unease and plotting to do something about it?

Brendan ONeill is deputy editor of spiked in London.<