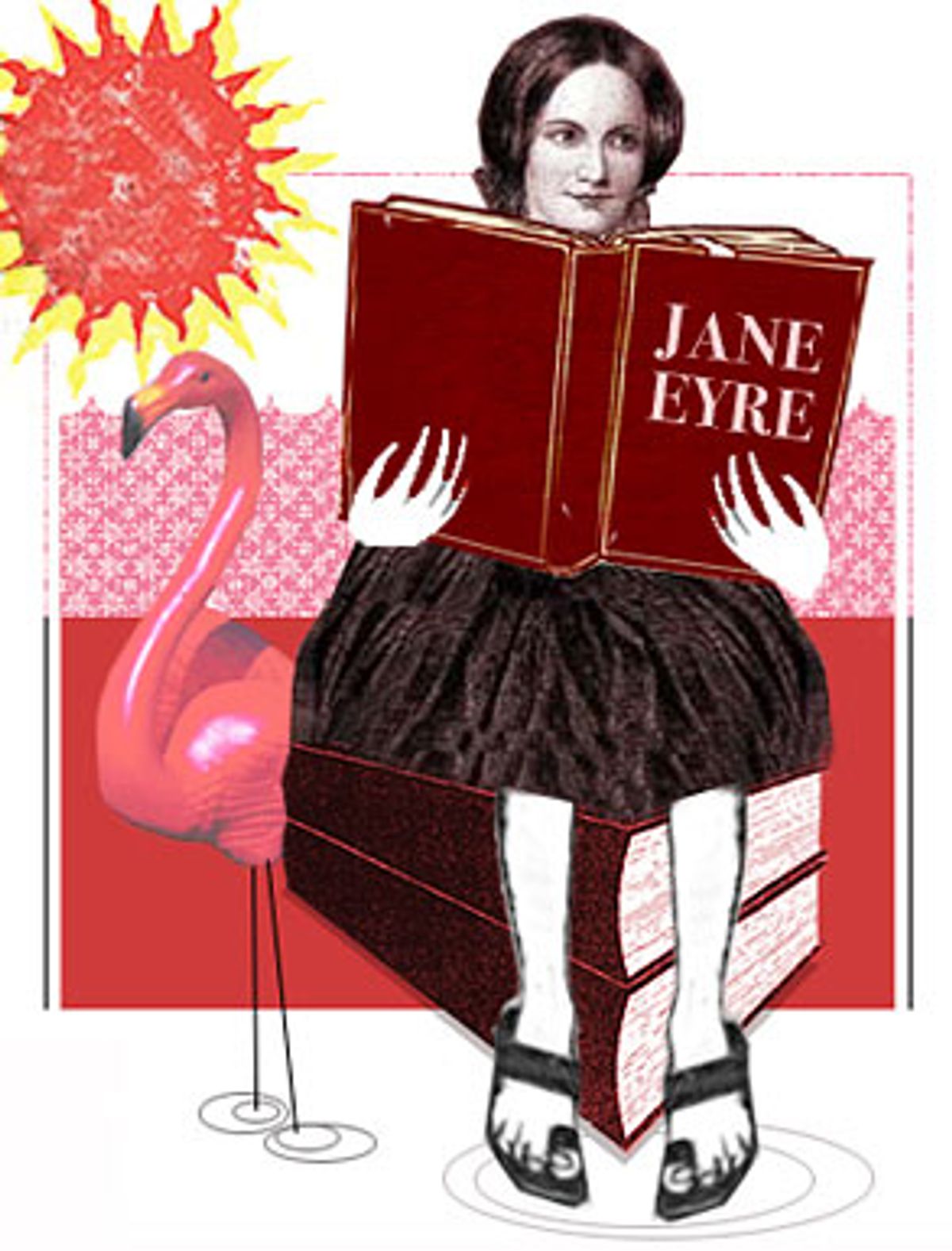 Recent research into the reading habits of men and women confirms what people in the book trade have long suspected -- women are much more adventurous in their choice of fiction than the male of the species. The study, carried out by Lisa Jardine and Annie Watkins of Queen Mary College in London, concludes that "[m]en who read fiction tend to read fiction by men, while women read fiction by both women and men." The study also finds that, with the possible exception of Jane Austen, men believe that "great literature" is only written by men.

I confess to having once suffered from this boys-only syndrome. Raised on a steady diet of Hardy, Dostoevski and Faulkner; enamored of the macho antics of Hemingway, Kerouac and Mailer, I spent my school days and early adulthood believing that the creation of serious literature was primarily a male endeavor. Women's writing was the stuff of discussion groups and beach fantasies; men's writing dealt with the big themes like existential angst and stoical heroicism. Of course, women were capable of writing beautifully and memorably, but there was always a suspicion that they were like Danica Patrick taking the lead at Indianapolis or Hillary Clinton getting ready to run for president -- women making a name for themselves in a man's world.

In other words, I was an idiot. My reeducation began a dozen years ago, when I was asked to take part in a radio presentation on Edith Wharton, a writer I'd previously assumed responsible for the "Little House on the Prairie" series. "The Custom of the Country" hooked me with its mercilessly elegant prose and mordant social satire. Four novels later I was devoted to a writer I now consider every bit as good as Henry James and far better than Sinclair Lewis or Theodore Dreiser. I understood the error of my ways. Since then, I've labored to make up for my earlier sins, recently deciding, for instance, to read "Mrs. Dalloway" instead of going back to "Crime and Punishment" for the sixth time. It is a slow, occasionally frustrating process, but I am a better man for it.

So when I was asked to take part in this series, I took it as a golden opportunity to further my remedial studies. After a brief consultation with my wife, Caryl (whose father was born and bred in Yorkshire), I decided to tackle "Jane Eyre," a product of that county's most prestigious literary clan. I had never read a word by any of the Brontës, nor had I seen the famous film version of "Jane Eyre" with Joan Fontaine and an uglied-up Orson Welles. My willful ignorance enabled me to approach this canonical text with the eyes of a child.

I started reading soon after our arrival at the house we'd rented for a week on Lake Champlain in Vermont. The plan was for the family to undertake an early-summer decompression after a long spell of work and school. My eldest daughter had just completed her junior year in high school, with its terrifying round of A.P. courses, achievement tests and social pressures. My son had finished eighth grade, which has also become alarmingly stressful in these hyper-expectant times. Both looked like they needed plenty of water sports, maple syrup and sun.

My sympathy for the rigors of my kids' lives diminished somewhat as I started to read about the orphaned Jane, cast into a harsh world of cruel relations, physical abuse, locked closets and, ultimately, the Lowood Institution for unwanted girls. And not an iPod in sight! Brontë's writing in the novel's opening chapters is so powerful that I almost brought the book into the Jacuzzi with me, though fear of dropping it into the froth and having to travel to Burlington for a new copy forced me to keep it on dry land. One of the most remarkable aspects of these vivid early scenes is their reminder that childhood as we now understand it simply did not exist in the 19th century. Children were seen as venal, inadequate little adults, in need of stern education and occasional "correction." Jane's physical and spiritual survival at pestilential Lowood is testament to her peerless strength of character, which is established through an unforgettable series of images and set pieces. Brontë's juxtaposition of her heroine's unshakable rebelliousness against the resignation of sad, ever-so-drippy Helen Burns does more to establish Jane's adamant nature than a thousand words of description.

And then, after a wonderfully under-described eight-year interval, it is off to Thornfield Hall and Jane's confrontation with its brooding master, Edward Rochester. (Brontë possesses an admirable ability to gloss over events -- long coach trips, periods of recuperation, puberty -- that do not further her narrative.) Writers constantly deal with the prospect of having their lovers "meet cute," though it is hard to imagine anyone ever topping the moment Rochester emerges before Jane out of the fog on a thundering horse, accompanied by a baying hound. He is a vision of male mystery and dash, yet the moment he is confronted by wee Jane he winds up on his ass, in need of her tiny shoulder to limp home.

Jane's romance with Rochester is as good as it gets, full of unspoken erotic tension, impossible obstacles and razor-sharp dilemmas. I tore through this part of the book during a spell of squally weather that forced the family to take refuge in our rental. This led to some curious juxtapositions. Caryl was reading Tom Wolfe's "I Am Charlotte Simmons" on the sofa with me, and when my concentration was broken by some perilously close cracks of thunder, I found myself pondering how dependent Wolfe is on Brontë for his own tale of a shy provincial girl making her way in the big, bad world. Substitute Hoyt and JoJo for Rochester and St. John, Lowood and Thornfield for DuPont College, and you suspect that Wolfe, like Rochester, also allowed himself to be propped up by a diminutive English governess.

More distracting to my concentration was the sound of the first season of "Sex and the City" playing on DVD in the next room. Although I maintain the show is little more than dolled-up porn, my daughter and her visiting friend see it as the pinnacle of urban sophistication, and I'd have needed to summon a serious level of hypocrisy to issue a ban. So Carrie and her friends provided background noise to my reading, chattering about their sexual entanglements just as Jane was confronted with the stark choice of taking on Rochester's dark past or assuming a missionary position with the sanctimonious young rector St. John Rivers. Once again, I was struck by how easily "Jane Eyre" can be seen as providing a touchstone for a popular contemporary work, though in Carrie's case the mercurial, mysterious forty-something is Mr. Big, and the boyish alternative has a stud in his tongue.

It isn't just the archetypal predicament of its heroine that makes "Jane Eyre" so fresh and vital. It is also the utter, untamed wildness of the author's vision. (The same is supposedly true of her sister's "Wuthering Heights," which is already in my bag for next month's Niagara Falls trip.) One of the reasons I did not go near either of these novels as a man in my 20s was that I feared that they would prove too domesticated. Well, the joke's on me. What male writer would kill off Helen Burns with such an utter lack of mercy? Or put that surprise package in Rochester's attic? Nowhere is this wildness more apparent than in the particulars of Jane's romantic dilemma. Lesser novelists would have framed her choice as between whispered scandal or a life of quiet desperation. Brontë, however, turns the volume up all the way, making Jane select between becoming an older man's mistress in the South of France or shipping off to India to most likely die of some horrid tropical disease before her 25th birthday.

My favorite moment in the novel comes when Jane contemplates Rochester's compelling offer to live in sin. Her mind is at war with itself; Feeling becomes locked in pitched battle with Reason. Feeling tells her to damn convention and opt for her one chance at true love, but Reason's response is remarkable and utterly unexpected: "I care for myself. The more solitary, the more friendless, the more unsustained I am, the more I will respect myself." What is so incredibly admirable about her decision to turn Rochester down is not its moral rectitude, but rather its erotic sophistication. You suspect that Jane does not really care all that much about violating the conventions of Christianity. What she really wants to avoid is winding up just another of Rochester's hussies, no different from the "French countesses, Italian signoras, and German grdfinnen" who he always spurned in the end.

In other words, she is adopting a position of romantic self-respect and emotional autonomy that is far beyond the reach of our flamboyantly liberated Carrie, who would almost certainly have taken the villa in Juan les Pins, then shrugged it off when Rochester gave her the boot. The contrast between Jane and Charlotte Simmons proves even more telling. Jane is able to hold onto her self-belief until book's end and is duly rewarded by Brontë, while Charlotte must abandon her deepest self in order to win a place in the world. It is impossible for a late 20th century man like myself to understand the outrageous courage it must have taken a Yorkshire preacher's daughter of two centuries ago to conjure this plain young woman without prospects or position who soared beyond the crippling morality and custom of her day. Impossible to understand, but easy to admire.

Next week in Summer School: John Cheever's "The Wapshot Chronicle"