Since I got married, everyone and their mailman has asked me this question. Why, suddenly, is my body everyone else's business? 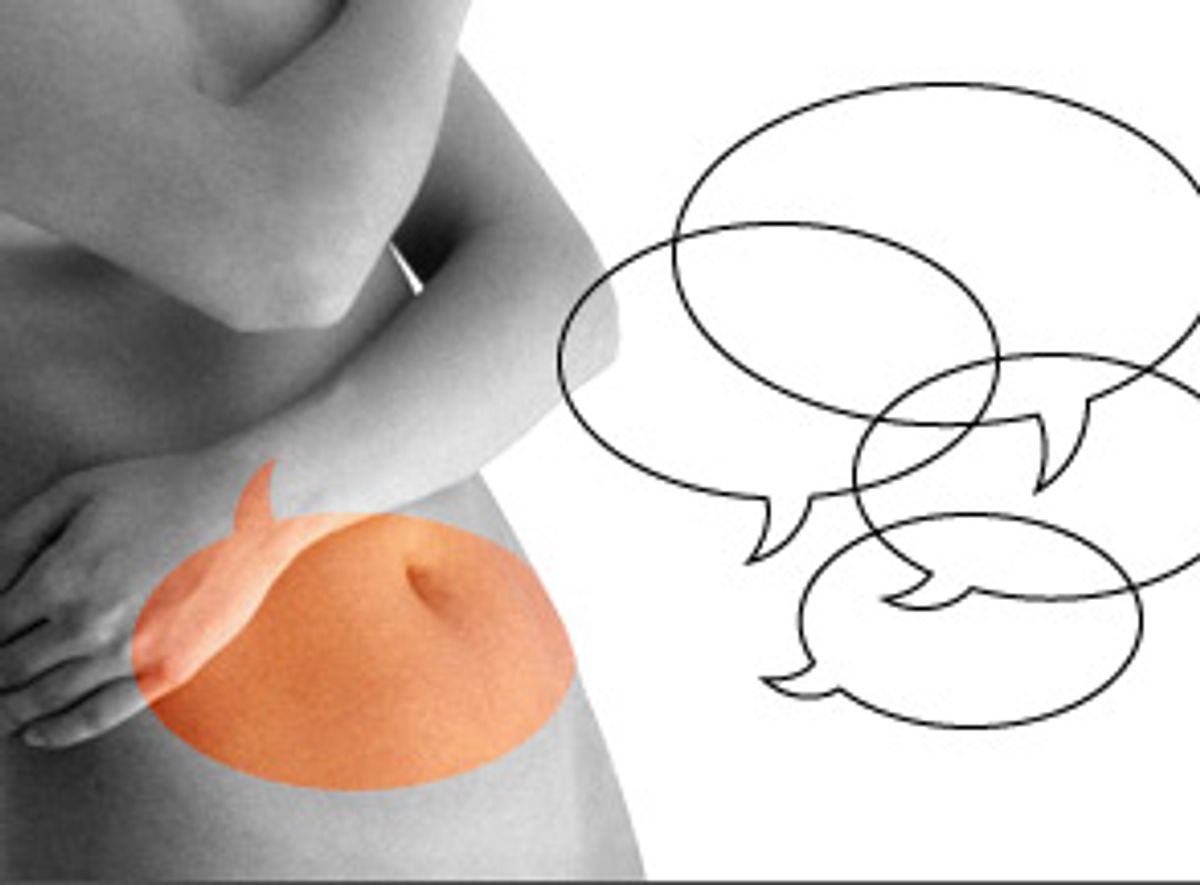 It's reassuring to know that if I ever experience postpartum depression, I can just ask Tom Cruise for advice. Because he understands motherhood, because his religious beliefs apply to everyone else, because he is a medical doctor and, most importantly, because it is his business, Cruise -- as you may have heard -- recently criticized Brooke Shields' for revealing in her new book that she took Paxil to cope. (At least I think he did: despite all the hubbub, his remarks to "Access Hollywood" were almost entirely incoherent: Something something "vitamins" something something.) In any event, Shields responded, I hope famously, by inviting him and his new fiancée Katie Holmes to see her in the London production of "Chicago": "I've set aside two tickets. One adult, one child."

Is it me, or are people -- and not just the self-righteous religious -- feeling more and more entitled to offer their "input," or at least make irritating inquiries, into others' private lives? I know, you could say that since Shields is the one who went public, she's fair game for comment -- glib, hurtful and clueless though it may be. But still. Invasive questions and unsolicited "advice" are also rampant among civilians, now more than ever, I think. And especially when it comes to women and marriage and childbearing -- future, present, or God forbid, lack thereof -- it seems everyone's got something to say.

"There definitely has been what we call a loss of civility, and part of that is that we now feel that we are more a part of the private lives of others," says Bernardo J. Carducci, a professor of psychology at Indiana University Southeast. "Especially when you have people carrying on cellphone conversations right next to you."

As a corollary, "we live in a very self-centered society where we believe we're entitled to know whatever we want to about others," says Pennsylvania psychologist Pauline Wallin, the author of "Taming Your Inner Brat." She blames the culture of reality television and talk-show tell-alls for blurring the boundaries between public and private. Call it the too-much-information superhighway: We think everyone else's business is our own.

How come everyone's so invested? To be charitable, I think it's partly -- even a little sweetly -- old-fashioned. It's still as if everyone in the community has a stake in every baby: It still, after all, takes a village. But every village, let's remember, has a busybody, and some busybodies have soapboxes. Add that to the TMI highway, and you get Tom Cruise vs. Brooke Shields. Barbara Walters vs. "lactivists." The entire rest of the world vs. well, me.

My recently ended singlehood, though increasingly tiresome to me, was clearly fascinating to everyone else. People had many, many questions. Chief among them, perhaps: "When are you getting married?" ("Wish I knew!"), or, more challenging, "Why aren't you married?" ("Between all the guys I like who don't call, and all the guys I don't like who do, who has time?"). Innocent questions, with icky implications: Either there's something you're doing wrong, or there's something wrong with you. Even the compliment hidden within -- "But you're so terrific!" -- is hard to hear when you're crabby and exhausted from your ninth Internet "coffee" that week. If I'm that terrific, just say so! Spare me the Unsolved Mystery.

They had questions, and they had tips.

"You should try being less picky." (About the person I'm going to spend the rest of my life with?)

"You should try meeting someone 'on the computer!'" (See ninth Internet "coffee," supra.)

"You should stop 'trying.'" (Translation: "Desperation: not a good look.")

Number of times such advice was offered in response to my asking for it: 0.

And for every comment I got from the marriage activists, I got another from the anti-establishment faux feminists: those who have their own -- unsolicited -- opinions about women who, sue us, might enjoy having a legal life partner. "Yeah, I'd like to get married sometime," I once said. "Really?" asked the near-stranger. "I didn't think of you that way."

Then yes, freaking finally, I got married. To a rabbi. Are you people satisfied?

Evidently not. "Did you ever think you would marry a rabbi?"

To be fair, the clergy-related conversation stoppers ("Me, I blame the world's ills on organized religion. I'm guessing you don't?") kind of crack me up. These days, it's the baby comments that are making me truly crazy. I can pinpoint the start of the prodding to, oh, our walk back down the aisle. Mind you, it's not coming from my mother, who -- aside from one rash e-mail about the hazards of hair dye -- has maintained a saintly silence. It's the friendly acquaintances, the casual contacts; they're the ones making inquiries that, if you think about it, boil down to "Say, are you two fucking?" "So, are you guys trying?" or, "When are there going to be little rabbis?"

And, one year later, So you guys don't want kids?

An older man I barely know -- but who knows I play ice hockey -- had this to say when he heard I was taking the season off: "Hmm, that'll help with conception." When my husband held a friend's infant at a party, every non-close friend looked at me. "He looks good with a baby!" they exclaimed, nudge nudge, wink wink.

First of all, sexist. Second, what if our fertility efforts were going even less well than, frankly, they are? What if we'd just had a massive fight about having children? What if, God forbid, I'd just had a miscarriage? Or been told I'd never get pregnant? I know most folks "mean well," but c'mon. Think, people, think. If you're that interested in our fertility, I'll give you the name of our reproductive endocrinologist, and you can write a check.

Also, I don't need to know that you, glowing, are "lucky" because you seem to get pregnant if you and your husband share a Diet Coke. Unless you can bottle whatever you've got, in which case I will write you a check.

And -- again -- there's the advice. A friend of mine in L.A. who has been struggling to get pregnant, was told by an acquaintance to "just go on a cruise." (Me, I got, "Bailey's worked for us!"). Others are quick to assure us that the best way to get pregnant is to adopt.

What are they saying, bottom line? "You should stop 'trying.'"

Now where have I heard that before?

Which brings me to my recent realization: It will never end.

Getting married doesn't make it stop, nor does getting pregnant. There have always been stories, of course, about pregnant women being glared at, say, for doing shots. And I realize that knocked-up women have been clucked and fawned and frowned over by strangers since long before they started blinking so big on my radar. But the comments today seem to go further over the line than ever. How about the guy who yelled across the subway car to ask my friend, "Have you had the amnio yet?" Or when friends who already have daughters hear "So you're trying for a boy?" Or, when carrying twins: "Natural, or IVF?" And questions like: "How much weight have you gained?" "Will you do a natural childbirth?" "Are you planning to breast-feed?" (Yes, but not near Barbara Walters.)

Someone even once asked my friend Leslie, who is in her 50s and was not pregnant, when she was due. "December," she lied, just to mess with them. "Your first?" asked the stranger. Yes, said Leslie. The response: "You sure waited a long time to start!"

My husband and I recently went to a small dinner party with people we didn't know so well, dreading kid-related inquiries. But we were spared -- and guess why? Because the lady with the babies got them. "So you have two already," a fellow guest, and relative stranger, said to her. "Are you done?"

So no, it doesn't end. Though one explanation offered by Carducci did soften my testy, prickly heart. Of conversational line-crossers, he says, "They're simply trying to make sense of the world around them." You? Single? It just doesn't make sense. You? Healthy and appealing? Please say you'll replicate! (Since you put it that way, I'll do my best!)

So really, I know: It's my job to toughen up, or lighten up -- to find the hidden concern, comparison, or compliment, to count to 10 and change the subject to Tom Cruise. From what I understand, I'm going to need the practice. "Just you wait," says my friend Leah, from experience, "'till people start asking you if you've hit menopause."