"I try to write songs and stuff"

The enigmatic Brian Wilson talks to Salon about emulating McCartney and Spector -- and writing music after "Smile." 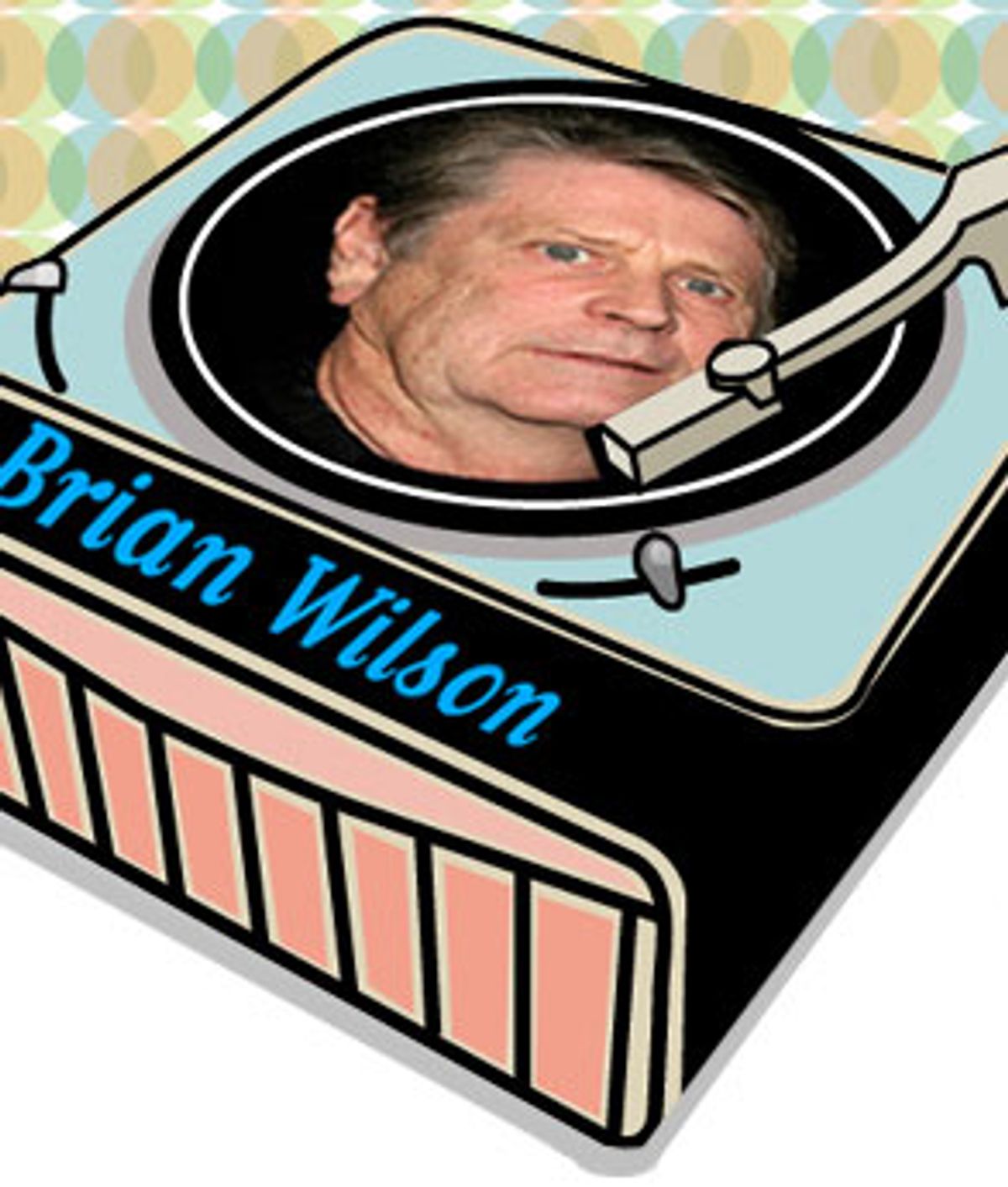 Last year, to near-universal critical acclaim, Brian Wilson presented the world with "Smile," a newly recorded and finally "complete" version of the legendary Beach Boys project he shelved in 1967. For Wilson's devoted, often obsessive fans, this was a major event, the long-awaited delivery of the holy grail of popular music.

Now his fans have more reason to celebrate. Rhino has released a two-DVD set that includes "Beautiful Dreamer," a feature-length documentary about the making of "Smile," and a filmed live performance of the album in its entirety. The documentary, by TV veteran David Leaf, follows the story of "Smile" from the beginning, chronicling Wilson's growing ambitions (primarily to beat the Beatles in the race to open up new frontiers in popular music), oddities (his infamous piano in a sandbox in the middle of his living room) and paranoia, and his eventual nervous breakdown, from which he has not fully recovered.

Unfortunately, the film doesn't really get into the minutiae of what Wilson's mental illness consists of, what his life has been like in the years since the nervous breakdown, and what the current state of this great musical mind is, preferring to sidestep those issues and focus on the positive. It also firmly takes the stance that "Smile," in both its mythical unfinished and concrete finished forms, is Wilson's great masterpiece, the best music he ever produced. ("Pet Sounds," anyone?)

But for music fans interested in the legend of "Smile," the film is pleasurable and illuminating viewing. Highlights include interviews with the brilliant and deeply dorky Van Dyke Parks, who wrote the lyrics for "Smile," and bizarre footage of the members of Wilson's new band, who have a goofily amateurish "Waiting for Guffman" vibe about them: They're shown working on "Smile's" complex vocal harmonies and glancing for approval at Wilson, who sits nearby in an armchair, near comatose and completely uninterested.

The real pleasure of "Beautiful Dreamer," though, is in the interview footage with Wilson. When he has granted interviews in recent years, Wilson has generally come across as seriously damaged, blank and unengaged and incapable of complex thought, answering questions flatly and with as few words as possible. In the interviews for this film, there's a refreshing liveliness to Wilson's demeanor. Watch him sitting comfortably at the piano, playing snippets of his music and explaining how they were written, and you can catch glimpses of the dazzling and precocious mind that, at 23, astonished the world with the visionary pop masterpiece "Pet Sounds."

Wilson spoke to Salon last week at his hotel in Manhattan, during a five-day press trip to promote the DVD release. Wilson, who was to appear that night on "The Charlie Rose Show," was relaxed and open. A man of few -- and sometimes inscrutable -- words, he burst forth with enthusiasm about music.

Are you nervous about appearing on "Charlie Rose" tonight?

How was it for you having cameras constantly around during the making of "Smile," filming for the "Beautiful Dreamer" documentary?

I got used to it after four or five days. They were following me all around for two months. Into the studio, out of the studio. On the stage, off the stage. Into my house, out of my house. I got used to it, but the first few days were very uncomfortable.

In the documentary it seemed as though you were much less nervous when you were sitting behind a piano.

Yes, that makes me comfortable.

What kind of piano do you have at home?

I have a piano that's called a Yamaha piano. I've had it for about 10 years. I play piano all the time. I'm always at my piano, playing music.

Is that how you got started in music, playing the piano?

Yes, I taught myself to play the piano.

Your father didn't teach you? Wasn't he a musician?

Yeah, he was, but not a very good one. He was a bad musician. I learned nothing from him.

What did you teach yourself to play?

When was it that you started writing your own music?

Do you do technical exercises on the piano these days? Practice scales?

I do. I practice scales. I also go to voice lessons. To keep my throat in shape, I go to a vocal coach in L.A., and I go for a half hour. [Demonstrates vocal exercises.] And by the time I get out, my throat is sore. But it builds up my throat muscles so that I can perform onstage.

Has that changed the way you sing?

It has. It's given me a much stronger voice.

You have such an angelic voice. Did that come naturally to you?

There was no one you were trying to sound like?

I wanted to emulate Bob Flanagan, the high voice in the Four Freshmen. I wanted to sing high like he did.

When you're asked what music you were listening to when you were making your Beach Boys masterpieces, you generally mention the Beatles and Phil Spector, and not much else. Were you really so focused on just those artists?

I was focused on them: the all-timers, the ones that will always be around. I still feel an inspiration from Phil Spector.

And Paul McCartney is your favorite of the Beatles?

Oh yes. He's written so many songs, it can make your head swim. If you listened to the whole Beatles catalog in one sitting, you'd wind up feeling dizzy. That's how good he is at music. He can make you feel dizzy.

And you still listen to his songs a lot?

Oh, absolutely. I like so many of them. [Enthusiastically sings snippets of "Junior's Farm," "Hey Jude" and "The Long and Winding Road."]

Do you listen to much classical music?

OK. Do you listen to much classical music?

I listen to Bach, and that's it. You know that album "Switched-On Bach"? I love that. I love it!!

Do you listen to any music that's being made now?

Don't members of your band ever try to turn you on to stuff?

No, we're turned on by our own music. We don't need that other music. Who needs that other stuff? We have our own stuff to deal with.

Are you writing new music now?

I've written about 15 songs in the last three months.

Are you making a new record?

Yeah, we just finished a Christmas record. And after that, we're going to do rock 'n' roll. Rock 'n' roll music.

It'll be like the Rolling Stones. And it will also be influenced by Phil Spector's records. I think I can make a good rock 'n' roll album.

Are you writing the lyrics?

No, I work with a friend named Steve.

What sorts of things does he write about?

I like the idea of someone coming in fresh and working with me, someone who can do what I can do. That way you can't go wrong with it.

You think your skills are more as a composer?

Yes, my skills are musical, not lyrical.

Do you think the music you're writing now is as good as "Smile" or "Pet Sounds"?

Because it makes you happier?

It just gets a load off my chest. Like when you first heard Phil Spector's records, it made you want to dance, right? Made you want to get right out of your chair and dance. That's what I want to do with my album.