A new book ventures to an impenetrable corner of the world to show how Burma shaped one of the 20th century's most important writers. 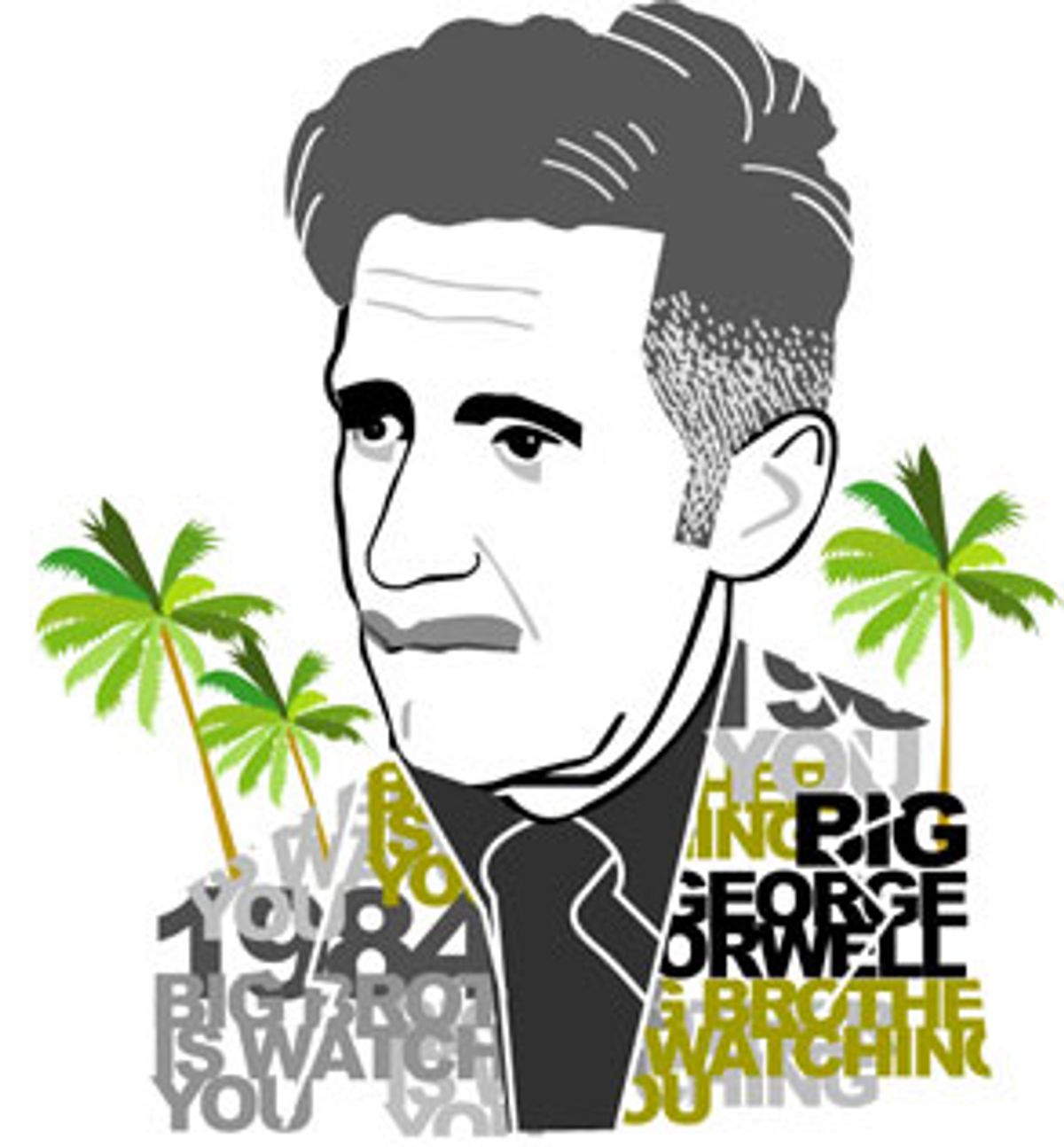 For a book about totalitarianism, Emma Larkin's "Finding George Orwell in Burma" contains a surprising number of jokes. Here's one about censorship, involving a Burmese man who travels abroad in order to see a dentist. "'Are there no dentists in your country?' [the dentist] asked the man with concern. 'Yes, yes, we have dentists,' the man replied. 'The problem is we are not allowed to open our mouths.'"

A Burmese friend of Larkin's tells the joke, as they're sitting in a tea shop in Mandalay, to signal that their discussion of politics has to come to a close; a couple of men who may or may not be government informers have just sat down at the next table. The scene smacks of the adjective "Orwellian," and in fact, Larkin's tea shop gathering is the meeting of an informal Orwell Book Club she starts in Mandalay. Her purpose in Burma, moreover, is to find out more about the writer whom one Burmese scholar calls "the prophet." As she writes, "In Burma, there is a joke that Orwell wrote not just one novel about the country, but three: a trilogy comprised of 'Burmese Days,' 'Animal Farm' and 'Nineteen Eighty-Four.'"

As jokes go, that last one isn't very funny, but Larkin's elegant and breezy book uncovers the truth behind it. "Burmese Days" (1934), Orwell's savage criticism of British Burma, takes care of the colonial period. "Animal Farm" (1946), Larkin argues, predicted Burma's "miserable experiment with socialism," which began with a military coup in 1962 (12 years after Orwell's death) and quickly turned into a dictatorship that transformed Burma from one of Asia's richest countries into one of its poorest. And "Nineteen Eighty-Four" (1949) uncannily describes the state of contemporary Burma after the failed people's uprising of 1988. There's Orwell's newspeak in the official description of slavery as "donated labor" and the renaming of government departments, like the military's transformation into the State Peace and Development Council; there is Big Brother in the form of the omnipresent threat of government informers; there's the specter of torture and imprisonment hanging over every rebellious word or act. And just as Winston Smith's job in "Nineteen Eighty-Four" is to "vaporize" dissidents from the public record, so it is illegal in Burma to write the name of a person who has fallen out of favor with the regime.

Larkin (like most of the names in the book, hers is a pseudonym; foreign reporters aren't allowed in Burma, and the offense of speaking to one is punishable by imprisonment) is an American journalist who was born and raised in Asia and speaks fluent Burmese. Curious about the five years Orwell spent during his early 20s in the Imperial Police Force in Burma, and convinced that "Orwell had seen something in Burma, had had some thread of an idea, that had worked its way into all his writing," she follows the path Orwell took 80 years earlier, traveling south from Mandalay to Orwell's first posting in the delta -- "a flat mass of mud and water with rich, fertile soil and the clammy hothouse heat of a tropical swamp" -- to the capital, Rangoon, east to Moulmein, where Orwell's mother was born, and north to Katha, the small town in the foothills that provided the setting for "Burmese Days." (Burma is now officially Myanmar, and most of the places within it have also been renamed, but Larkin sticks to the old colonial names, to minimize confusion but also, one suspects, as a quiet protest. "By renaming cities, towns and streets," she writes, "the regime seized control of the very space within which people lived.") A curious meld of travelogue, political history and biography, toggling between colonial Burma and the present day, "Finding George Orwell in Burma" is both a clear introduction to an oft-ignored corner of the world and a convincing argument that it helped shaped one of the 20th century's most important writers.

In 1927, on a trip home from Katha, Orwell announced his decision to quit his career as a colonial officer and become a writer. From then on, the formerly gung-ho empire builder who had advocated corporal punishment for unruly Burmese devoted himself to championing the downtrodden. But Burma, Larkin notes, has been given short shrift by Orwell's many biographers, because so little is known about his time there. None of his letters home survive, he wrote little -- besides a few poems and maybe an early character sketch of John Flory, the protagonist of "Burmese Days" -- and most of the official colonial records of his employment were destroyed when the Japanese invaded Burma during World War II. But Larkin raises two questions that make her theory truly tantalizing. The first relates to the novella Orwell was planning to write as he lay dying of tuberculosis, called "A Smoking Room Story," about the seedy underbelly of colonial life in Burma. If the country hadn't had a profound and lasting effect on him, "why," Larkin wonders, "after nearly a quarter of a century away from Burma, did he look to the country for inspiration while he lay on his deathbed?"

The second question is raised by the Burmese Larkin meets and who marvel at the accuracy of "Nineteen Eighty-Four": "Orwell was never oppressed himself; how could he write about oppression?" In colonial Burma, Larkin finds conditions parallel to those Orwell described in his novel. As a police officer, Orwell found himself on the other side of intelligence gathering, charged with the task of monitoring the locals. The isolation of a colonial officer becoming disillusioned with the empire, as Orwell was, finds its echo in the isolation Winston Smith feels at being unable to express his hatred of the Party, which reverberates again in modern-day Burma in the placid expressions the Burmese adopt to mask their true feelings. The British too, enforced a strict "gagging act" on the media; in "Nineteen Eighty-Four," the papers are filled only with news flattering to the Party, as is the government-controlled media of Burma today.

Orwell himself wrote, a decade after his service in Burma, that "the strangeness of the scenery" couldn't help but make an impact on a foreigner. "In the beginning the foreign landscape bores him, later he hates it, in the end he comes to love it, but it is never quite out of his consciousness and all his beliefs are in a mysterious way affected by it." Through Larkin's lush descriptions of a fertile wildness of intense colors and sticky heat (in Katha, she sees "a spectacular sunset, with mauve-colored clouds and pink-red streaks that unfurled like ribbons across the sky," and oxcarts that "left rosy clouds of dust in their wake"), it's easy to see what entranced him. And, as she notes, Orwell wrote with a lyricism of the landscape in "Burmese Days" that's noticeably absent from his other novels.

Larkin's fluency in Burmese and determination to slip past military intelligence under the guise of a tourist make her a unique guide, though penetrating the fortress of censorship still proves difficult. She learns that a key to figuring out what is happening in Burma is to look for what is not in the newspapers; the absence of news about rice and gold clues her in to the severe shortage of one and the rising prices of the other. Government agents follow her wherever she goes, and more than once she suspects that the person she's chatting with is a government informer. In a particularly poignant scene, she stops to talk with an old man in a small village in the delta; he's animated and chatty until he sees Larkin's "entourage," including a policeman. "Curiously, he no longer understood anything I said, shaking his head dumbly. He's too old for your questions, said the policeman, laughing."

Besides her forays through Orwell's life, the best parts of Larkin's book are the numerous meetings with locals, like the retired teacher in Rangoon who loves to wander the aisles of her local supermarket, basking in this sign of progress, even though she can't afford to shop there. And there's the 13-year-old tea shop serving boy from the delta, who tells Larkin that he goes home two or three times a year, before fessing up: "No, I haven't been home yet. Maybe I'm not going home anymore." "All you had to do, it seemed," Larkin writes, "was scratch the surface of one of the town's smiling residents and you would find bitterness or tears." And like truly Orwellian characters, not a single person Larkin talks to has a happy story to tell.

The tasks Larkin sets for herself -- to argue for Burma's influence on Orwell, to describe the current conditions of the country, to sort through its history -- could easily fill three books, and sometimes this relatively slim volume feels too light, the evidence too vague. Her weakest contention, that Burma's current woes are the fault of British colonialism, would be more convincing if she had compared it with India; the two countries, ruled by the same colonial government, couldn't have evolved more differently. And though she hints at the country's shadow economy -- Burma is second only to Afghanistan in heroin production -- it remains a largely untouched subject.

But considering the obstacles to her reporting, Larkin gleans an admirable amount of information. Hers is a book designed to pique curiosity but not sate it, and perhaps that's for the best; Burma could use a little more attention from the outside world.