There's mounting evidence that the man in charge of public broadcasting is on a conservative crusade. 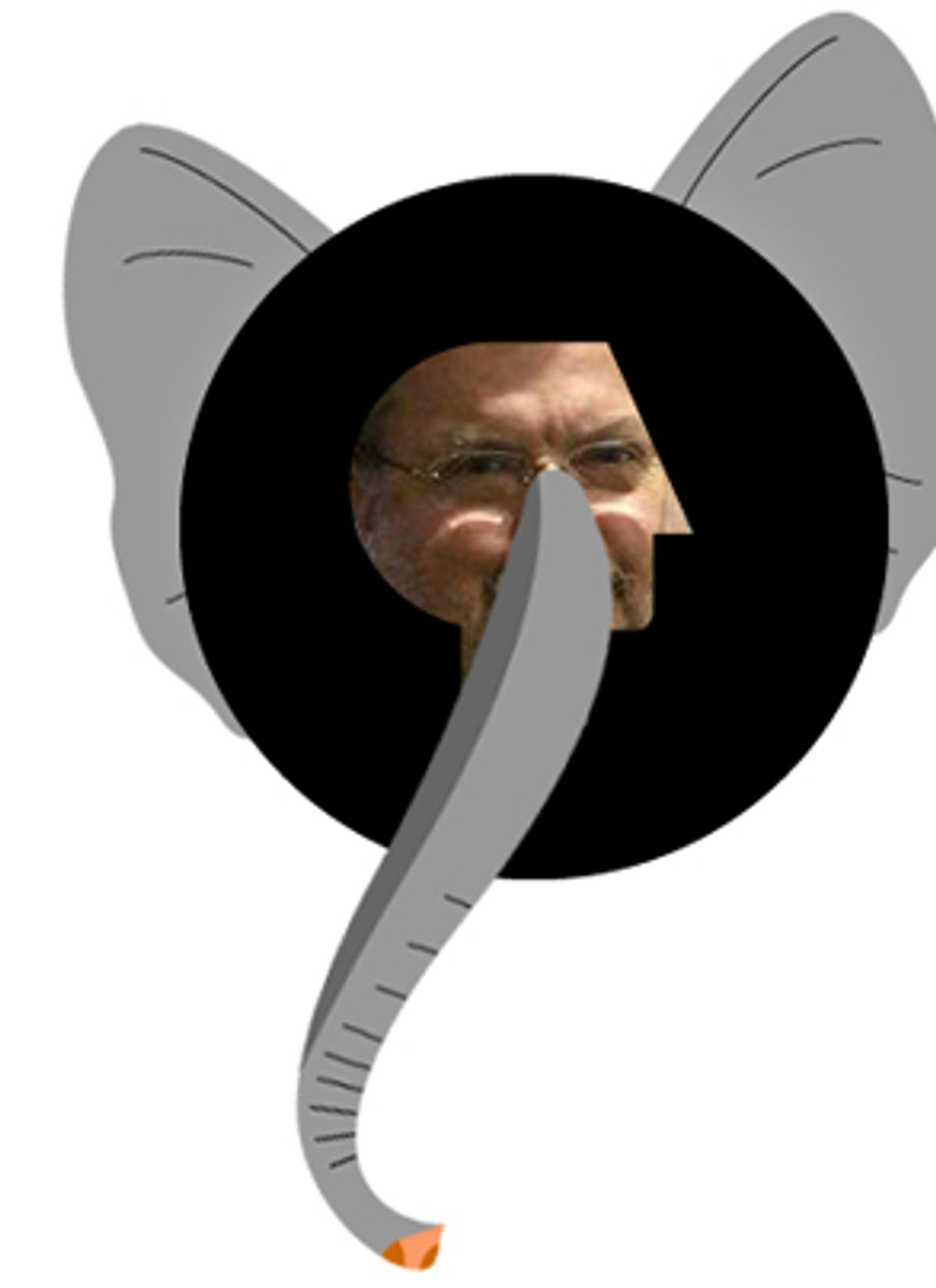 Despite his continued protestations to the contrary, it's becoming harder and harder to believe the Corporation for Public Broadcasting's chairman, Ken Tomlinson, when he says that his main concern is to try to bring some political "balance" to PBS's lineup.

While polls have shown that a majority of Americans don't see PBS as leaning one way or the other ideologically, Tomlinson seems to view programming choices in a starkly black-and-white manner; as he told NPR's Bob Garfield on May 6, "I don't want to achieve balance by taking programs that are the favorites of good liberals off the air. I want to make sure that when you have programs that tilt left, we also have some programs that tilt right."

The problem is that, if his actions are any guide, administration-approved appointments, secret contracts with conservative content monitors and suppressing polls that refute his "liberal bias" charge are part and parcel of his vision of balance. In effect, Tomlinson is stacking the deck so far to the right at the CPB that what he claims to see as balance, many others view as a right-wing coup in public broadcasting.

A Republican appointee originally named to the CPB board by President Clinton in 2000 and promoted to chairman by President Bush in September 2003, Tomlinson currently heads all of the country's publicly funded broadcasting -- both domestically and internationally. In an unprecedented move, he also chairs the Broadcasting Board of Governors, which oversees U.S. government-sponsored, nonmilitary, international broadcasting, a dual role that no one has ever held before.

Recently, lawmakers on Capitol Hill have called for Tomlinson to resign from both posts because of his having spent close to $30,000, without the knowledge of CPB's board, on consultants to monitor PBS's content for "liberal bias" and having hired a White House staffer to write rules for two other new content monitors -- possible violations of federal law.

These calls come at a critical time for the CPB, as the House Appropriations Committee just voted to cut its funding by about half (which, if it stands, would be the largest cut in its history), and the board is looking for a new president.

The past week has been a rough one for Tomlinson, with a veritable flood of evidence pointing to the hubris he has exhibited in trying to prove the "liberal bias" in public broadcasting canard. Late last week, the New York Times reported that Tomlinson had authorized, without the consent of the CPB's board, $14,170 in payments to a consultant named Fred Mann. He tapped Mann to monitor the political leanings of guests on PBS's "Now" program, which was then hosted by Bill Moyers, for evidence of bias. According to reports, Mann labeled segments "pro-" or "anti-" Bush, and "anti-corporation" or "anti-DeLay."

How do we know this? Not because Tomlinson released the information to the public. Rather, Sen. Byron Dorgan, a North Dakota Democrat, demanded to be provided with the information Mann gathered, and while his office would not release the data to the public or the media, Dorgan spoke on the Senate floor Monday, outlining some of his findings.

Meanwhile, there has been quite a bit of speculation about why Tomlinson would hire a guy in Indianapolis no one had ever heard of to monitor PBS. Who is Fred Mann? On Sunday, the Indianapolis Star almost unwittingly outed him, in the process providing a glimpse of Mann's partisan credentials. In a short item on the controversy, the paper reported tracking down someone named Fred Mann, but couldn't find out if it had found the right one, concluding simply that "a Frederick W. Mann, 61, who has worked for the conservative National Journalism Center in Washington, has Indianapolis ties."

Turns out they had the right Mann. And it gets even better: The National Journalism Center was founded by the American Conservative Union, which describes itself as "the nation's oldest conservative lobbying organization."

More recently, the NJC has been run by the conservative Young America's Foundation. Even if these were the only indications we had of Tomlinson's partisanship, they would still go a long way in calling into question his contention that he is merely taking an unbiased look at the political leanings of public broadcasting.

If that isn't enough to call his credibility into question, it appears that Tomlinson also lied to a member of Congress about the contract. According to the New York Times, in a letter dated May 24, he told Sen. Dorgan that he didn't consult with the CPB's board about hiring Mann because it had been "approved and signed by then CPB President, Kathleen Cox." The only problem is, the contract is dated Feb. 3, 2004 -- five months before Cox became president.

These are merely the latest developments in a months-long string of deception, partisan hackery and willful malfeasance on Tomlinson's part -- moves that have unquestionably undermined the health and future of public broadcasting. But it appears that help may finally be on the way.

In May, the two top Democrats on the House Appropriations and Commerce committees, Reps. David Obey and John Dingell, delivered a letter to the inspector general of the CPB, Kenneth Konz, demanding an investigation into Tomlinson's actions.

The one charge leveled by Obey and Dingell that has the most potential to do some damage points to what may be a potentially serious violation of the Public Broadcasting Act of 1967.

The charge has to do with Tomlinson's hiring of Mary Catherine Andrews, former director of the Office of Global Communications at the White House, to write a set of guidelines for the two new ombudsmen Tomlinson hired to monitor political content on PBS. The problem, it seems, is that Andrews was still on staff at the White House when she wrote the rules. Legally, this violates Section 398 of the act, which bars federal employees from engaging in any "direction, supervision or control over public telecommunications."

But Andrews is hardly the only Republican staffer Tomlinson has lobbied to join the CPB. The résumé of Tomlinson's handpicked choice to become the next president of the CPB -- Patricia Harrison -- hardly burnishes his nonpartisan bona fides. She currently works as an assistant U.S. secretary of state, but she previously served as a co-chairwoman of the Republican National Committee.

And the hits just keep coming. While Tomlinson has repeatedly said that he is not beholden to the wishes of the Bush administration -- despite the fact that he seems to hire only from within its ranks -- the most recent disclosures deal a death blow to his contention that he runs his shop independently of 1600 Pennsylvania Ave.

On Monday, NPR's David Folkenflik came out with a damning report on NPR's Web site, in which he reprinted excerpts from several e-mails Tomlinson sent to colleagues -- essentially hanging him with his own words.

One e-mail concerned a proposal floated by Sen. Conrad Burns, R-Mont., who wanted to give public television and radio stations more of a voice in naming board members to the CPB. On July 21, 2004, Tomlinson wrote to Kathleen Cox, the CPB's CEO and president (who has since been forced out), that "the White House has issued guidance. WH officially opposed to the Burns amendment."

Jeffrey Chester of the Center for Digital Democracy, a media advocacy group, says of the most recent evidence: "The Bush White House and the Republicans are behind Tomlinson, and they have no intention to drop their campaign against public broadcasting."

In response to all this, on Tuesday, several lawmakers on Capitol Hill finally took Obey, Dingell and Dorgan's lead and began speaking out against Tomlinson's partisan power plays. Rep. Edward Markey, D-Mass., demanded that Tomlinson resign not only as chairman of the CPB but as chairman of the Broadcasting Board of Governors.

Markey made his remarks at rally on Capitol Hill to oppose the $200 million in cuts in federal funding for public broadcasting approved by the House Appropriations Committee on June 16. The committee passed a spending bill that would cut CPB's funding by 25 percent next year, slashing it from the $400 million it received in 2005 to $300 million -- but with other cuts in technological spending and specific programs set up for children's educational programming, total cuts would reach about $200 million.

What's more, 16 senators -- including Joe Lieberman and Chuck Schumer -- banded together Tuesday to issue a statement calling for Tomlinson's dismissal.

Lieberman was the most vocal of the group, saying in the statement that "Kenneth Tomlinson's actions call into question his commitment to public broadcasting and Americans would be better served with a less partisan leader of this important national treasure." Lieberman also sent a letter to the Senate Appropriations subcommittee that has jurisdiction over the CPB to demand that it reject the cuts it earlier proposed.

Given all this, it's pretty clear that it's well past time for a serious conversation about how to continue to fund public broadcasting while keeping it free from political influence, since the current system, even if it survives Tomlinson, is obviously in the sights of the Bush administration. "This is a long-term war," Chester says, "which the Republicans have been engaged in to weaken public broadcasting. I think it's time to be realistic and admit that in the short term, this kind of federally funded system may not be able to thrive."

But how best to make it thrive? That's the question many in the public and private sectors seem to be dodging. Whether Tomlinson survives the current controversy is somewhat irrelevant -- what matters most is that the federal government make a serious commitment to the health of public broadcasting, and keep politics out of the equation.

Some proposals, like the one recently floated by Markey, along with Sens. Christopher Dodd and Jim Jeffords, look better on first blush than they turn out to be on closer inspection. The trio has introduced the "Digital Opportunity Investment Trust Act," which, if passed, would generate some revenue for public broadcasting -- but not nearly enough to ensure its survival. The bill relies on the windfall (estimates put it at upward of $30 billion) the government is expected to receive in 2008 from the sale of TV spectrum rights.

The problem is that under the bill, PBS stations would get only about 20 percent of the interest on the sale of some spectrum rights. What's more, the funds would mainly be used for educational programming and "software," and not necessarily to support journalism.

Lawmakers should be applauded for finally stepping in and denouncing Tomlinson for the partisan player he is, but without some realistic and innovative plans to keep public broadcasting a healthy, nonpartisan alternative to commercial television, these battles are likely to be fought all over again in a few years.

Paul McLeary is a staff writer for CJRDaily.org, and reported from Iraq earlier this year.