"Articles of War" by Nick Arvin

This gripping WWII novel follows a stunningly average young soldier from Iowa to Europe -- and forces us to rethink the glory of the Greatest Generation. 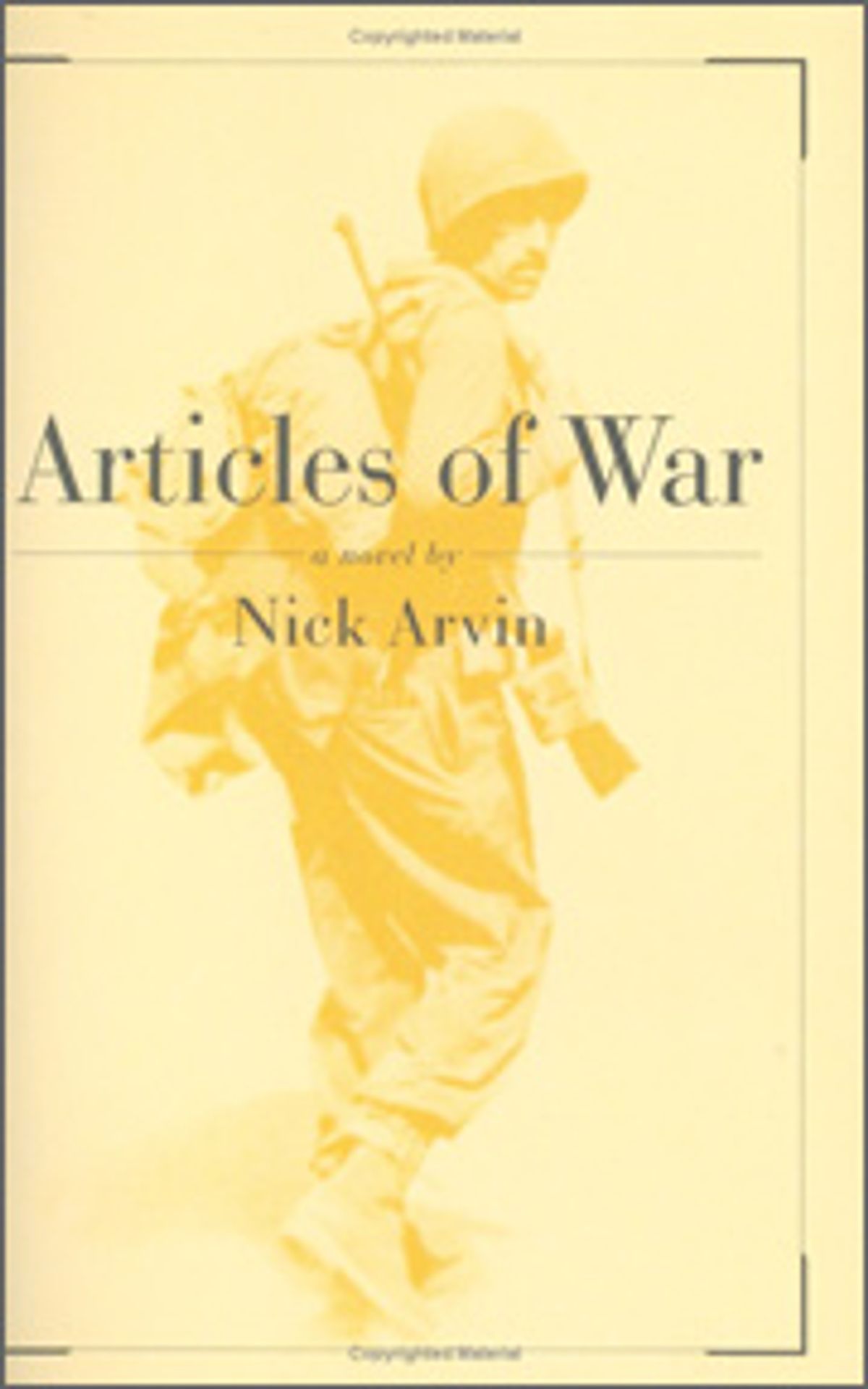 War has devastated most human endeavors, but it has been good to literature. If, that is, one can forget all the potential novelists and poets (not to mention the potential accountants, musicians and fathers) floating in the bloody surf at Omaha Beach, lying facedown in the jungles of Indochina, or blown in two along the highways of Mesopotamia. What we write about when we write about war is ... well, which war? Readerly expectation differs from war to war. It took the World War II novel 15 years to travel from the realism of James Jones and Norman Mailer to the surreal bedlam of Joseph Heller. Vietnam and the Gulf War, on the other hand, underwent absurdist dissection relatively quickly. For the soldiers who fought, however, one doubts that Vietnam and the Gulf War felt any more morally bizarre than World War II. The Greatest Generation massacred more than its share of civilians on the way to global salvation. Nevertheless, recent years have seen collective sainthood bestowed upon American soldiers in general and the dogfaces of World War II in particular.

In this light, it would be a good idea to read "Articles of War," Nick Arvin's bleak and harrowing World War II novel, in one sitting. To do otherwise runs the risk of dampening its tremendous power. One might also wish to have a loved one nearby when one finishes it, if only to hold for a few moments. Yet Nick Arvin is not to be envied. For one, his publisher is comparing him to Hemingway, a comparison not even Hemingway could in the end survive. For two, he has written with searing honesty of a war so reputedly uncomplicated that many look back on it with a kind of sick longing. For three, he did not experience this war. Indeed, he has never experienced any war. Criticism is inevitable.

Nick Arvin may not have experienced war but he has obviously pondered its human results deeply. If it is true that, as Ryszard Kapuscinski says, those who have lived through war and those who have not "are two different species of human beings," it would seem just as likely that for every writer savagely enriched by war hundreds of others have seen their minds put through its shredder. Another way of saying this: Experience does not necessarily make one an expert, and empathy can take writers to higher places than expertise.

"Articles of War" is a novel whose hero is a coward. Our coward, Heck (so named for his refusal to swear), is an amazement of averageness. He is not particularly intelligent, nor is he that interesting. He is 18 years old. He is from Iowa, prematurely balding and a virgin. The thoughts and reflections Arvin typically gives Heck meander in and out of a DMZ of sentimentality. In fact, the only thing that makes Heck interesting is his heartbreaking survival amid conditions no human being should be asked to endure.

But that word: "coward." In David Maraniss' "They Marched Into Sunlight," a nonfiction account of an ambush that nearly wiped out an entire Army battalion during Vietnam, one of the assault's few survivors writes his wife afterward addressing this notion of cowardice: "There were men that ran, and men that shot themselves but I just feel sorry for them. They were just normal men that reacted normally." The available literature indicates that the battlefields of World War II were jampacked with supposed "cowards." Roughly 80 percent of all U.S. infantrymen did not -- could not -- fire their rifles during combat, and the initial encounter between the German and U.S. armies during World War II, in Tunisia in 1943, resulted in an American retreat.

One's first human response to terrifying events is usually to be terrified. This is what Arvin is showing us, and he does so in such a moving way that no compassionate person who reads this novel will feel able to speak freely of "cowards" in combat again. Heck arrives in France scared and confused (his strong, taciturn father had cried seeing him off) and wanders dreamily from one encounter to another -- some confusing, some peaceful, most horrifically violent. He falls for a French girl and deludes himself into believing they are in love. He sees one man get impaled by an icicle, another transformed into a bloody mist by a booby trap that Heck himself nearly triggered. He deserts on one occasion, intentionally gets himself wounded on another, and in between sees his dead lieutenant being eaten by a dog he has grown attached to. (Heck's response results in one of the two times he fires his M-1 during the novel.) And in the novel's finale Heck is forced to do something that, like World War II itself, is both necessary and dreadful. The action that is not pathetic (in its true sense) is awful (in its true sense), yet always Arvin's prose remains unhurried, often lovely, and imbued with a muted, almost judgeless quality. This quiet relentlessness allows the novel some wrenching moments. Indeed, when one of Heck's fellow soldiers tells him, "Don't get too attached to anyone. Not me, not anyone," Arvin may as well be addressing the reader. Above all, one is left with the feeling that, whatever any conflict's particular geopolitical merits, war on the ground tends to become a perpetual motion machine powered by human error.

"Articles of War" is not a perfect novel (one could argue that it should end a chapter earlier) but it is a "war novel" that in a better country than ours would be assigned to high-school students across the land. Unlike Kurt Vonnegut's "Slaughterhouse-Five" it will not make anyone a premature existentialist, and unlike Tim O'Brien's "The Things They Carried" it will not increase enrollment in MFA programs. What it will do is make one sick at the idea of oneself or anyone else fighting in a war. That war is hell is, of course, not the most unexpected supposition. It is obvious, it is familiar, and yet, once again, here we all are in hell.