"March of the Penguins"

Think you've got it bad? This emotionally wrenching documentary about the difficult life of the emperor penguin will put things in perspective. It may even renew your faith in love. 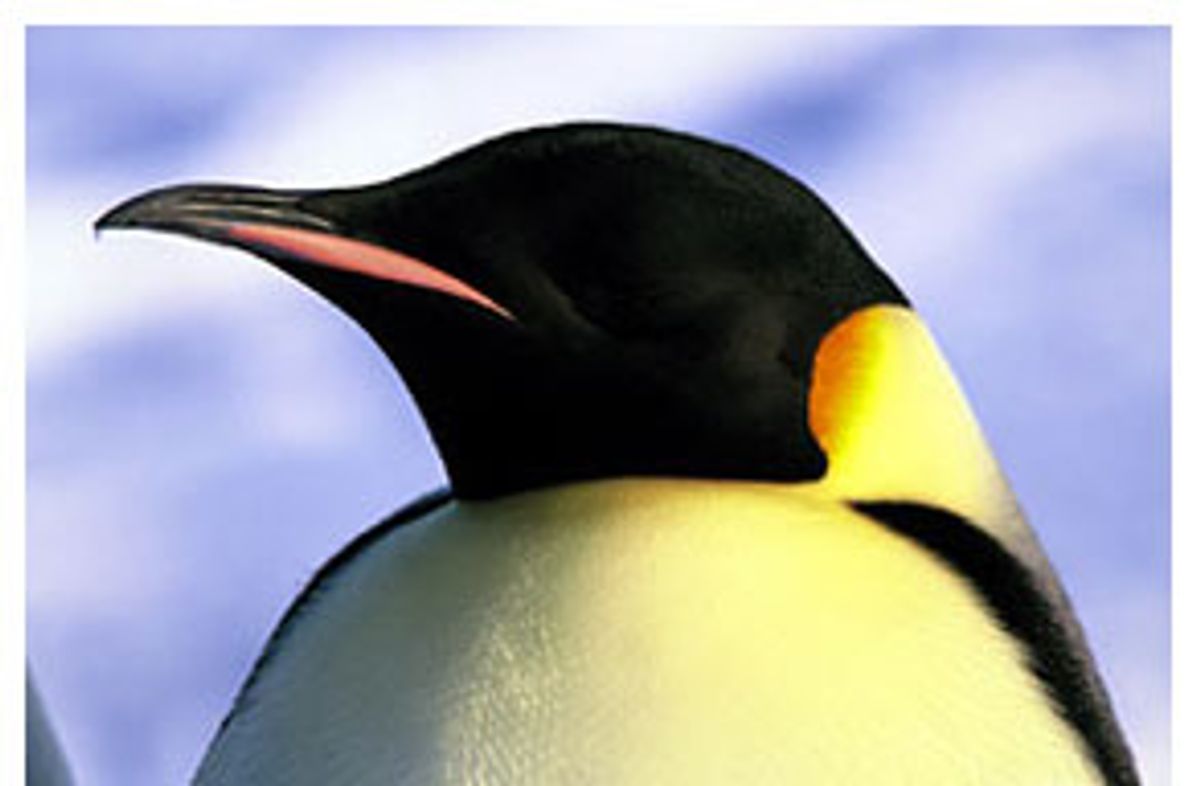 Luc Jacquet's luminous, moving documentary "March of the Penguins" is enough to make you hope there's no such thing as reincarnation: Human beings have it hard enough, but the life of the emperor penguin, one of strife, deprivation and against-all-odds adaptability in one of the most unforgiving corners of the earth, is far rougher.

Emperor penguins, who make their home in Antarctica, may not be able to fly, but they're fabulous swimmers. In the summer months, they enjoy their ocean habitat fattening up on small fish, squid and crustaceans. But when it's time for them to breed, being so close to the water won't do: They need to reach their breeding ground, far inland, a place where the ice is reassuringly solid and where, in winter, few predators will bother them. In March, as winter approaches in Antarctica, throngs of emperor penguins belly-flop onto the ice after their summer of blissful swimming and trek dozens of miles across a heartless frozen landscape (their short legs make them woefully slow walkers), through blizzards and biting winds, to reach the spot where they can mate and, with luck, raise their young. And that's when the hard work of procreating really begins for the emperor penguin.

There's more drama, and more heartbreak, in "March of the Penguins" than in most movies that are actually scripted to tug at our feelings. More than once the picture's narrator, Morgan Freeman, notes that the emperor penguin's saga of mating and child rearing is a love story, and while that's an admittedly handy anthropomorphic device, when it comes to understanding why the emperor penguin would go to such great lengths to mate and have babies, the inexplicability of human love may be the only comparison we have.

Of course, in the more rational corners of our brains, we know that like all living creatures, the emperor penguin is driven by an instinctual desire to propagate the species. Even so, rationality is useless in the face of the choked-back cooing sound a penguin mother makes when she realizes her chick has died -- she nudges its body with her beak, perhaps not so much out of sorrow as disbelief, as if her faith in its survival had become programmed into her very being. And in a moment not even Douglas Sirk would have attempted to dramatize, she tries to steal another mother's chick as a replacement: The other moms in the flock intercede, shooing her off -- nature's way of dealing with sociopathic behavior.

Saying too much about what the emperor penguin has to do just to survive the mating and child-rearing process would be a little like giving away too much of the plot of a thriller. But Jacquet captures some key details so artfully it's hard not to give a few of them away: He shows us how the parents keep their one precious egg warm by balancing it on their feet and tucking it under a pouch of skin. (If the egg should roll away for even a second, the chick inside will freeze to death. In austral winter, inland temperatures can reach as low as -85 degrees Fahrenheit.)

The parents trade off baby-sitting (or egg-sitting) duties: The males stay with the eggs while the females trek back to the ocean for food -- they bring some back for the babies in pouchlike compartments in their throats -- meaning the dads go without food for two months. They stand around, unable to move too much owing to the precious orbs balanced on their feet -- it's probably something like being an extra on an eternal movie set, only under the most extreme weather conditions. Jacquet's cameras (his cinematographers are Laurent Chalet and Jerôme Maison) capture the penguin males huddled in a giant swirl against devastating winter storms, protecting the eggs at all costs: The group rotates slowly, so that all the penguins will have a turn at the warmest part of the pinwheel, the very center.

You have to wonder why any living creature would put up with all this. But that's part of the emperor penguin's mysterious allure: They seem to be stubborn, sturdy creatures who take pride in triumphing over adversity, like grandparents who brag about having made it through the Depression. Jacquet captures the cold beauty of their landscape in a way that makes us understand why, for better or worse, it represents home to them: The appeal of all that white-sugar ice, glistening in the summer sun, is easy enough to understand. But even the icy blue-grays of the dusky winter have their own mystical pull.

The emperor penguin itself is a natural movie star: Jacquet captures a group of them in long shot during their arduous walk -- moving in long lines and clusters, they look like shimmery black jelly-beans against the snow. When the chicks are finally born, we see that they were worth the wait: Fuzzy and winsome, they look just like Steiff toys.

And the adults are beautiful beyond words: Their glossy feathers are so densely packed they resemble fur; the orange markings on their heads are so softly colored they look as if they've been airbrushed on. Their elegance goes far beyond the fact that they look as if they're decked out in evening wear. Each penguin seeks out his or her mate for the season (these couples will stay together, but only for the year), looking for those unnameable qualities, that je ne sais quoi, that even humans seek in a mate. When a "he" has found the right "she," or vice versa, the two celebrate by gracefully arching their necks; their heads lowered, they nudge each other conspiratorially, and communicate with each other in a language of distinctive clicks.

They could be performing a number from a '30s musical: You and me and baby makes three. Maybe "March of the Penguins" is a love story, one that recognizes nature as the foundation of even the most refined feelings of human beings: Hard times are coming, but together we'll see them through. If birds can do it, maybe people can too.