Tear the roof off

Why the current donnybrook between Arnold and California Democrats threatens to bury the state's pioneering Million Solar Homes program. 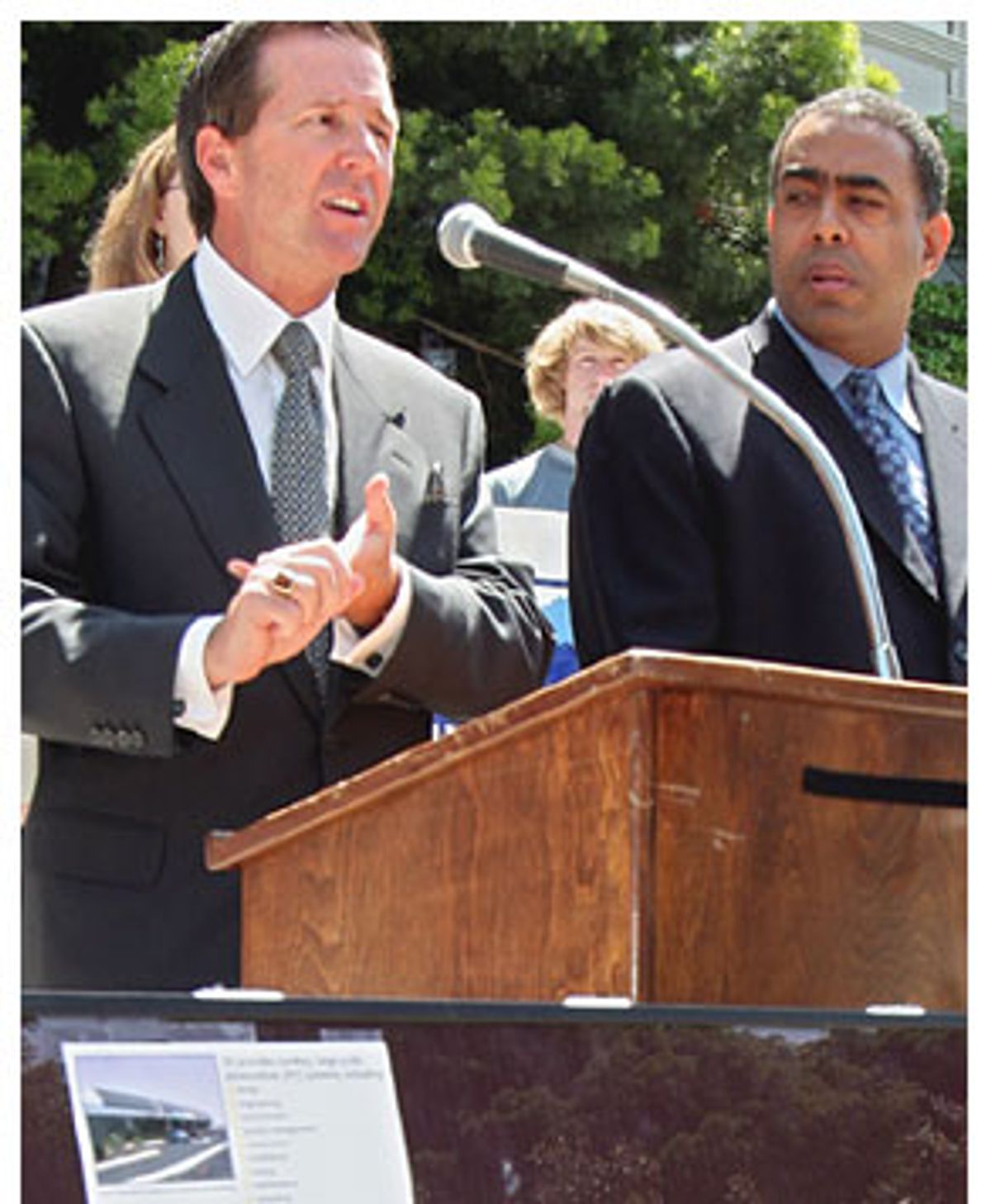 The Golden State could soon enact the most ambitious solar-energy initiative ever proposed in the United States -- legislation intended to put photovoltaic panels on a million California rooftops. Unless, that is, the bill gets derailed by a behind-the-scenes political pissing match between Republican Gov. Arnold Schwarzenegger, who has thrown his prodigious weight behind the initiative, and the Democrats who control the state Legislature.

The Governator unveiled the initiative last August under the name "Million Solar Homes," proposing a 10-year subsidy to stimulate solar purchases on residential buildings. It picked up bipartisan backing from the get-go: Later that month, a Democratic state senator from Los Angeles County, Kevin Murray, incorporated the proposal into his own bill requiring a fixed percentage of all new California homes to have on-site solar power. But the combined package failed to pass out of committee, largely because of objections from Republicans and fiscally conservative Democrats to the program's cost and solar-installation mandate.

Murray and officials from the Schwarzenegger administration then went back to the drawing board and devised a new and improved (or at least more broadly palatable) Million Solar Roofs Initiative that contains no mandate and that has been broadened to stimulate solar not only in the residential sector but also on commercial and municipal buildings. It was appealing enough to conservatives that GOP state Sen. John Campbell agreed to cosponsor it, creating an unusual political alliance. "Campbell is not one of these moderate eco-friendly Republicans," Murray said. "He is an absolute right-wing fiscal conservative from the heart of Orange County. There probably isn't another bill that we would agree on -- it's just that we both understand the logic of this."

Schwarzenegger, Murray and Campbell have managed to summon a groundswell of bipartisan support for the bill. It sailed through the state Senate by a vote of 30-5 on June 1. But there are still significant hurdles to overcome in the Assembly, where tensions between Democrats and the governor are running higher than in the Senate, and lawmakers are considering adding a few provisions that could antagonize Republicans and kill the bill's chance of passage.

The Assembly is expected to vote on the measure in early August, and at the moment, it's a cliffhanger: "I'd say it's 50-50 right now whether the bill dies as a result of these unfortunate political circumstances, or whether the state pulls together and actually passes it," said David Hochschild, policy director of the California-based Vote Solar Initiative.

The ambiguity surrounding the bill's fate is more than a little agonizing for the solar advocates and enviro groups that see it as a veritable holy grail of clean-energy legislation at a time when federal-level efforts in this arena are floundering. The overwhelming rejection of the McCain-Lieberman climate amendment to the energy bill by a 60-38 vote in the Senate last Wednesday dashed any hope that Washington might soon take the lead on a forward-looking energy policy. Any aggressive action in the near future will likely have to come from the states, and California is well situated to lead the pack. "We've got the sixth-biggest economy in the world," said Hochschild, "which puts us in a better position than any other state to move markets and become the cradle of the clean technologies of the future."

The bill would add a staggering 3,000 megawatts of solar capacity in the state -- equivalent to the capacity of 10 average-size coal-fired power plants or two nuke plants, and more than 30 times the current installed solar capacity. That could make California the No. 1 solar market in the world, surpassing today's top two biggest consumers of photovoltaic technology, Germany and Japan.

Better yet, if all goes according to plan, the program would make the cost of solar power "equal to or cheaper than conventional fossil-fuel electricity in 10 years," according to Campbell. That kind of price adjustment -- a result of increased economies of scale -- could have national and even global implications, transforming America's energy landscape and making solar an even more logical choice for developing nations building up their energy systems.

Moreover, Hochschild predicts that the estimated $2 billion in subsidies that would be doled out over 10 years would result in energy-cost savings to consumers of roughly $12 billion over the 25-year life cycle of the solar panels installed under the program. A surcharge on electricity bills would subsidize a rebate program to make solar installations more affordable for consumers. The rebates would be gradually phased out over a decade, with incentives declining each year to encourage investments up front and stimulate economies of scale.

The program is based on a financing model that's already proved successful in Japan. In 1994, the Japanese government launched a 10-year subsidies program by paying 50 percent of the cost of every solar installation; now it is paying only 3 percent, and the subsidies are due to be completely phased out by the end of the year. "They've managed to reduce the average cost of a residential solar system by 72 percent in a decade," Hochschild said, "and built a robust solar industry that now dominates the global market."

If California achieves similar success, it could reap even greater financial benefits from the program than Japan has, given its prodigious solar resources: On average, the state gets 25 percent more sunlight annually than Japan, and 40 percent more than Germany, the current top consumer of solar.

A battery of industry, environment, public-interest, and religious groups have thrown their weight behind the legislation, ranging from Shell Oil to the American Lung Association to a statewide coalition of nearly 300 churches. Robert Redford, Edward Norton and other celebrity greens are also enthusiastically endorsing the effort. "It has more support than any other bill in history," Murray said.

And yet, perhaps not quite enough to overcome one big hurdle.

"The political climate in Sacramento right now is contentious, and that could pose a problem," Campbell said. In other words, Million Solar Roofs could become a pawn in the political skirmish. "The initiative has the governor's imprimatur on it, so some worry that Democrats will shoot it down simply because it would be seen as a big victory for the governor," said Ed Smeloff, an executive at Sharp's California-based U.S. solar division and a strong advocate for the legislation. And at a time when Schwarzenegger's popularity has been dropping precipitously -- a poll out this week put his approval rating at an all-time low of 37 percent -- this is a victory he sorely needs.

Democrats accuse Schwarzenegger of creating a combative climate, most recently by calling for a special election in November to get the public to vote on a series of budget- and education-related provisions that the Legislature has rejected yet the governor is determined to pass. "He has gone out of his way to antagonize us," said Assemblymember Mark Leno, a Democrat from San Francisco. "This special election is just one more barrier that the governor has created in developing any kind of positive relationship with the Legislature. On top of the fact that he has called us thieves, children, untrustworthy, evil and girlie men."

Then there are concerns about some inconsistencies in Schwarzenegger's environmental policies. For instance, the governor and the director of his energy commission, Joe Desmond, recently backed plans for a major transmission line from the interior West to California to pipe in cheap coal-powered electricity -- an initiative that contradicts the governor's purported clean-energy goals. It failed to generate needed support in the Legislature.

But the biggest sticking point for the solar legislation could prove to be a dispute over labor issues. Unions are now putting heavy pressure on liberal Democrats in the Assembly to add a provision to the Million Solar Roofs bill that would stipulate a prevailing-wage requirement for the technicians installing solar panels. That would increase the labor cost of installation by 30 to 40 percent, according to Campbell's office. "Prevailing wage is the single biggest threat to the bill," Campbell told Muckraker. "I'm telling you it won't get Republican support if Democrats succumb to union pressure to add that provision."

Hochschild believes the prevailing-wage controversy is a trivial distraction from the far-reaching ambitions of the bill, but also a symptom of the bigger problem: the threat of partisan tensions unraveling bipartisan coalitions. "Based on its own merits, this initiative would sail through. But partisan bickering and bipartisan support have become the two defining themes of Million Solar Roofs," he said. "It's like the little devil sitting on one of California's shoulders, and the angel on the other. And the question is, which one will win out?"

Campbell and Murray, the bill's cosponsors, are placing their bets on the angel. "I'm optimistic," Campbell said. Murray is too, arguing that the initiative would go down in history as a victory for the Democrats as well as for the governor. "I've got to believe that we'll get over our differences to pass this thing," he said. "Much as I'm probably opposed to everything else that has come out of [Schwarzenegger's] mouth, this is something we've been able to see eye to eye on. The governor came our direction on this -- he's a Republican who is supporting a bill that subsidizes a new environmental program! This is one of those things that in the end if you're a Democrat and you don't support it, there is simply no justification."