A bitter defeat for the press

The Supreme Court's refusal to hear the Cooper-Miller case will do more than hurt two reporters -- it will erode the press's ability to cover sensitive stories. 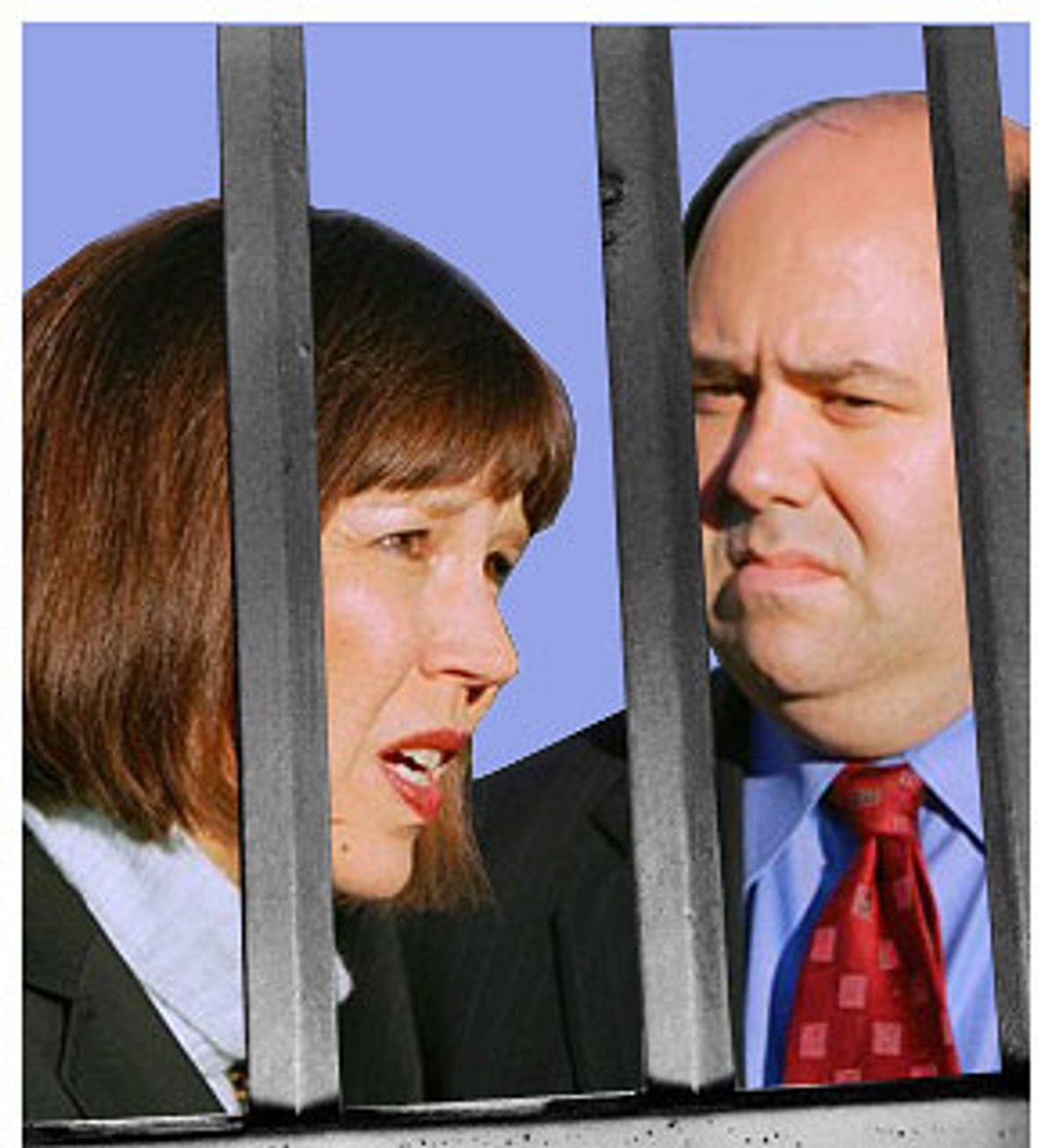 The tale is like something out of Kafka: In 2003, George W. Bush accused Saddam Hussein of trying to buy uranium in Africa. A former U.S. ambassador, Joseph Wilson, revealed that the claim was false. In an obvious attempt to punish Wilson, one of Bush's aides then disclosed the identity of Wilson's wife, an undercover CIA operative named Valerie Plame, to the conservative columnist Robert Novak, who printed the name. The Justice Department then launched an investigation to find out the identity of the leaker, but two years later, neither Bush, Novak nor anyone in the White House, the CIA or the Pentagon has been punished over the matter. Now, after a Supreme Court decision handed down Monday morning, it appears that the only people who'll be going to jail in connection with the uranium imbroglio are two reporters who had almost nothing to do with it. One of them has never even published an article on the case.

The two reporters are Judith Miller, of the New York Times, and Matthew Cooper, of Time Magazine. Although Cooper wrote a story naming the operative, he did so only after Novak's column was published; Miller has not written on the subject. But both have been subpoenaed by Patrick Fitzgerald, a special prosecutor appointed by the Justice Department to determine who leaked Plame's name and occupation to the media. Citing a journalistic duty to protect their sources, Miller and Cooper have refused to testify before Fitzgerald's grand jury. Now that the Supreme Court has declined, without explanation, to hear their appeal, the two will likely head to jail (or begin home confinement) in a matter of days.

The court's decision, several veteran investigative reporters and First Amendment watchdog groups said Monday, threatens to stifle journalists' investigations into the most sensitive federal issues, especially stories having to do with national security.

"I am absolutely convinced that reporters will continue to assure confidential sources that they will be willing to go to jail to protect them -- but the court's decision will make the sources more unwilling to come forward," says Andy Alexander, Washington bureau chief for Cox Newspapers and the chair of the Freedom of Information Committee for the American Society of Newspaper Editors. Miller's case is particularly troubling, Alexander says. Allowing a federal prosecutor to compel a reporter to testify even if she's never published the source's information "moves us perilously close to having the government turning reporters into an arm of the police. When we see that happening in regimes around the world Americans are quick to label it a police state. Well, now that's happening in America."

What's most odious about the idea of Miller and Cooper going to jail is that there isn't a clear purpose to it. Perhaps you could make an argument for keeping them behind bars if it would lead the government to the scoundrel who leaked Plame's name. But lawyers who've been watching Fitzgerald's moves in the case suggest that he may already have some idea of who leaked the name, and the fact that he hasn't yet charged someone in the case may indicate that there's not enough evidence to move forward on the prosecution. Instead, what Fitzgerald seems to be after is a much weaker charge of obstruction of justice -- a low-level, catchall accusation that federal prosecutors use all the time when their main investigation runs dry. (Martha Stewart, for instance, was convicted of obstruction -- lying to prosecutors -- after investigators failed to make an insider trading charge stick.)

Compelling a reporter to testify about his or her sources in order to prosecute a mere obstruction of justice charge would strike a deep blow at the free press, says Bruce Sanford, a First Amendment attorney at the Washington firm Baker & Hostetler. "It's a puny crime at best, and it really does not justify this incredible disruption of the relationship between reporters and sources," Sanford says.

Sanford was one of the drafters of the 1982 Intelligence Identities Protection Act, the law that makes it a crime to divulge an intelligence agent's identity. He has long argued that the leak to Novak was not technically a crime under the 1982 law; Plame wasn't a classified undercover agent in a foreign land (she had a desk job in Virginia in the summer of 2003), and her identity was therefore not really that deep a secret. It's likely that Fitzgerald has also come to the same conclusion -- that would be one explanation for why he hasn't charged anyone in the case.

In its brief to the Supreme Court, Time Inc. argued that one reason justices should hear the case was precisely this question over whether leaking Plame's name was a crime. In a statement released Monday, Time -- which was represented in the case by Theodore Olson, Bush's former solicitor general, and Miguel Estrada, whom Bush once nominated for a seat on the D.C. court of appeals -- said that it now plans to make a similar argument to Judge Thomas Hogan, the D.C. judge who initially held Miller and Cooper under contempt. A spokeswoman for the New York Times said that the paper plans to do the same on behalf of Judith Miller. An attorney for Time said the hearing could come "in a matter of days, not weeks."

The irony here, of course, is that many on the left have long been arguing that disclosing Plame's name was a crime for which someone should be jailed. Joe Wilson, who initially fingered Bush political advisor Karl Rove as the leaker, famously said that whoever named his wife to the press should be "frog-marched out of the White House in handcuffs." But at the moment, Rove or whoever else in the White House may have named Plame looks safe from the frog-march.

And then there's the matter of Novak, whose position in this case is a complete mystery. To date nobody knows whether Novak has been subpoenaed in the case, and, if he has, whether he's talked. There has been widespread speculation that Novak must have cut a deal with Fitzgerald -- otherwise, why would he be getting off scot-free while Miller and Cooper are facing jail? The columnist did not return a message left at his office Monday morning; he has not spoken to other reporters about the case either.

Beyond what it means for Miller and Cooper, observers were most upset that the court missed an opportunity to resolve a long-standing question of law: Do reporters enjoy a privilege allowing them to keep their discussions with sources secret from the federal government?

The main legal precedent in this area is Branzburg vs. Hayes, a 1972 Supreme Court decision that held that reporters must obey a grand jury subpoena to discuss their confidential sources. But as Ted Olson pointed out in a recent Op-Ed in the Wall Street Journal, the 5-4 Branzburg decision included a curious concurring opinion by Justice Lewis Powell that has led to conflicting lower court opinions on journalistic privilege ever since. Today, while there are few First Amendment absolutists who argue that reporters should always be shielded from government inquiry, many say that Branzburg should only apply when the reporter has direct knowledge of a serious crime that cannot be prosecuted in any other way besides compelling the journalist's disclosure.

Currently, nobody quite knows when journalists are shielded during federal inquiries; indeed, under today's law, the answer depends on geography, literally on where a case has been filed. That's because some federal appeals courts have ruled that reporters can keep their sources secret in all cases, while others have ruled that they can never keep them secret; and still others have split the difference on the question, saying that reporters can keep things secret in some instances and must testify in others. Reid Cox, an attorney at the Center for Individual Freedom, a libertarian nonprofit advocacy group that filed a brief on the reporters' behalf in the Supreme Court case, points out that if Miller had been subpoenaed in New York, where her paper is located, rather than in D.C., where Fitzgerald's grand jury sits, she would likely not have been forced to testify.

The law is confounded by the fact that every state except Wyoming grants reporters some kind of privilege from naming their sources in a state-court inquiry. Attorneys general in 34 states had pleaded with the Supreme Court to take the Miller-Cooper case because, according to them, the uncertainty at the federal level weakened their state laws. The Supreme Court's decision, Cox says, only confuses the state of privilege even further.

Some lawmakers in the Senate and the House responded to the court's decision with a call for legislation that would explicitly grant reporters a privilege. Rep. Mike Pence, a conservative Republican from Indiana who has co-authored the House version of the bill, said the court's decision underscored the need for Congress to act. "Chief among the rights enumerated in the Constitution is the freedom of the press," he said in a statement. "Compelling reporters to testify and, in particular, compelling them to reveal the identity of their confidential sources is a detriment to the public interest." Sen. Christopher Dodd, a Connecticut Democrat who co-authored the Senate's version, pointed out in a statement that the recent revelation of Deep Throat proves that the country benefits from a press that enjoys a privilege.

But reporters were skeptical that such a bill would pass. Burton Glass, the executive director of the Center for Investigative reporting, noted that the public doesn't really respect reporters as it did during Watergate. "There's a general climate where investigative reporters who in the past were seen as stewards of the public interest now are seen as the enemy or as part of the problem," he said. "If the public doesn't see the connection between protecting anonymous sources for reporters like Miller or Cooper and their own public interest, I think our democracy is weakened." And more and more, Glass says, he doesn't think the public makes that connection.

Neither Time not the Times would venture any guess as to the likelihood that Judge Hogan would lift his contempt charge at the next hearing. Bruce Sanford, though, said he was somewhat optimistic that the judge would reconsider. Lucy Dalglish, the executive director of the Reporters Committee for Freedom of the Press, said she held out a slim hope that Fitzgerald, the prosecutor, would change his mind.

But Judith Miller, who has previously said she's willing to go to jail, appeared resigned to her fate. In a statement released by her paper, she said, "I am extremely disappointed. Journalists simply cannot do their jobs without being able to commit to sources that they won't be identified. Such protection is critical to the free flow of information in a democracy."

In an e-mail, the investigative reporter Lowell Bergman, a friend of Miller's, said: "Judy made a point of drawing a very important line. We can only hope that her sacrifice -- she has already been enduring tremendous emotional pressure -- and the sacrifice to come will be recognized as an example of the kind of strength it takes to be a journalist."