In the aftermath of the deadliest attack ever on American women soldiers, Marines unite around the need for military women in a war zone. 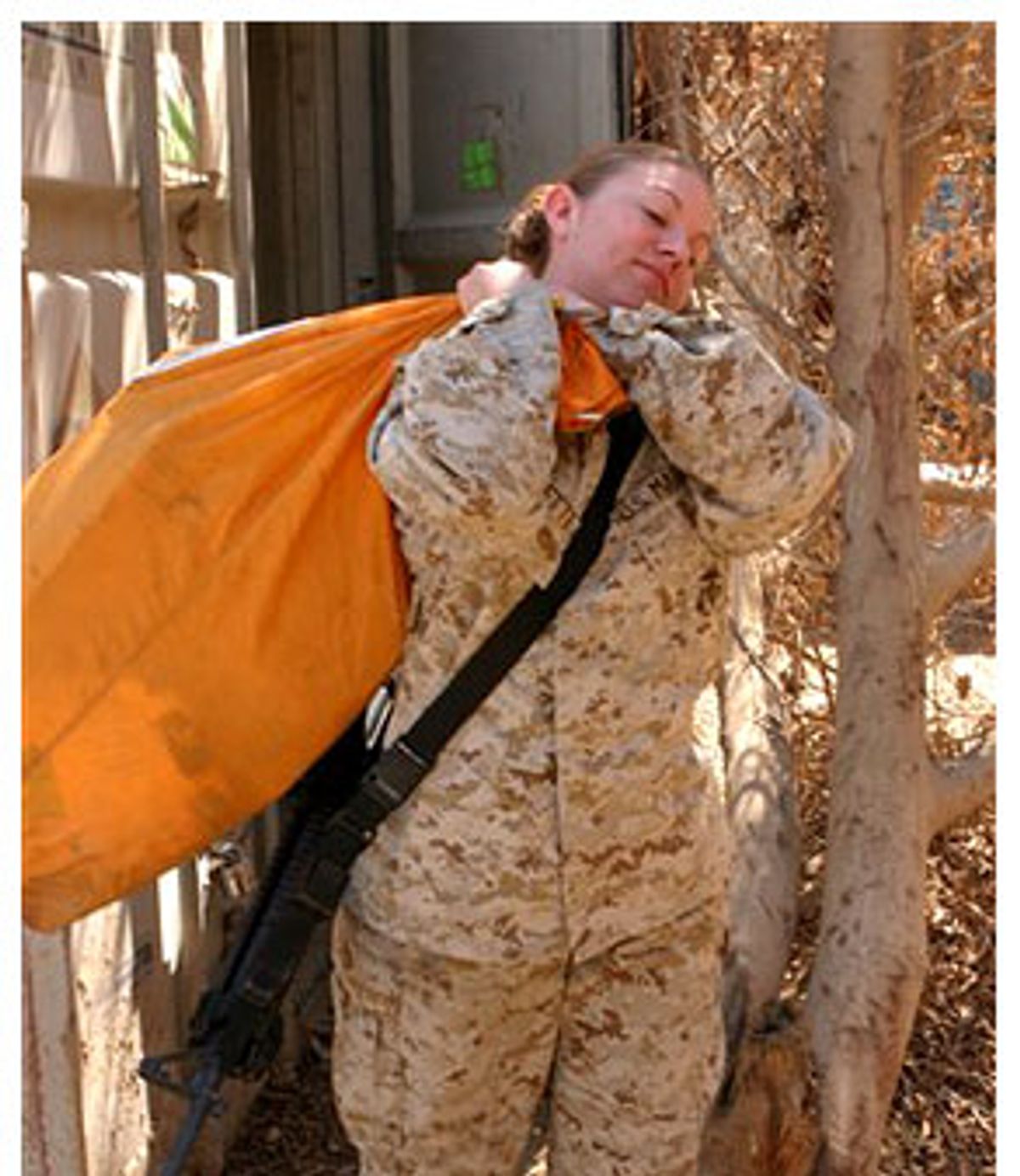 At 7:30 on a dusty evening June 13, a convoy of U.S. Marine vehicles headed east on Fallujah's main road and signaled for a vehicle in front of them to pull over. In Iraq, U.S. convoys always direct Iraqi traffic away from them as a security measure, and like thousands of other Iraqi drivers, this driver obeyed and pulled over to the side of the road. The driver waited for two Humvees to pass by, and then, as a lightly armored, seven-ton truck full of 20 Marines rolled past him, he accelerated and detonated his explosives, igniting the fuel tank and setting the truck ablaze. Five Marines and one sailor were killed, and 13 wounded, but the bombing made international headlines because three of the dead and 11 of the wounded were women. It was the deadliest attack on female U.S. soldiers in American history.

"I set up security around the truck. The truck was still burning," said a Marine who responded immediately at the scene, and who was only a few hundred feet to the east when it happened. The man requested anonymity because of the sensitivity of the incident. "We went back to Entry Control Point 1 and grabbed 10 fire extinguishers. We attempted to put out the fire, but the fire burned until it wanted to stop. Twelve fire extinguishers couldn't put it out. We weren't able to get into the vehicle at all."

Members of India Company, 3rd Battalion, 4th Marines, had arrived at the scene within minutes of the attack, and encountered a scene of carnage and twisted metal. The ground was littered with scattered equipment and torn bodies. As the men of India Company rushed to put out the fire in the burning truck, squads fanned out through the area and cleared nearby buildings, following security rules for a convoy attack.

When the Marine who gave the account of the bombing was asked what went through his mind when he saw the aftermath of the bombing, he looked away, at a loss for words.

In the United States, the attack reignited the debate on the role of female soldiers, but here in Fallujah there is widespread American acceptance of the role played by female Marines. The women who were killed had been searching female Iraqis at crucial checkpoints; the truck had just made the rounds of all the Fallujah checkpoints and had picked up almost all the female searchers before it was bombed.

Within India Company, which fought to secure the bomb site, many dismissed distinctions between men and women in the military. Many of the young men here are on their third tour of duty in Iraq, belonging to the same unit that helped pull down Saddam Hussein's statue in Firdos Square. The 3/4, one of the most famous units of the Iraq war, also took the city of Tikrit and fought the first siege of Fallujah in April 2004.

Lance Cpl. Alex Pak of Bellbrook, Ohio, is a fire team leader who was at the scene of the bombing. "I totally commend women. There's a lot of opposition for them to join the military, and it takes a lot of balls for a woman to come out here. Guys have it easy -- they are expected to be in combat, fight for their country and die -- but women have opposition from the get-go. It takes a hard person to join an elite force like this one." Pak is only 20 years old, but he has experienced more combat than many members of the military have in two decades. Pak gives the impression of being at least 10 years older than he is. Like many other members of India Company, he is also on his third tour of duty in Iraq.

Cpl. Courtney Waddell of Angola, N.Y., was waiting to begin her shift as a female searcher at Entry Control Point 1 two days after the suicide bombing. Normally, she works as a combat engineer, fortifying positions and building bridges. "I think especially because of the nature of my job, the military needs to keep us in forward positions, especially for things like this, because otherwise we would have to use doctors or use their husbands to search the Iraqi women, and we can't trust their husbands. Females are essential in the city to perform these actions. The military is supposed to be a uniform unit. How can it be uniform if females aren't supposed to be doing what the males are doing? My job is the closest thing to infantry we can get. That's why I believe I should stay in a forward position." Like Pak, Waddell is 20 years old.

The attack underscored the difficult security situation of American forces as they try to assist the return of normal life in Fallujah. For months, the city had been quiet as U.S. and Iraqi forces patrolled the streets, but the latest suicide attack is part of a sharp spike in violence in the area. As more residents have returned to a place still largely in ruins, there are visible signs of a civic life returning to what had been a ghost town.

All residents of Fallujah are now retina-scanned and fingerprinted and must carry a special I.D. card that allows them entry to the city through one of the checkpoints, a kind of technological replacement for an old city wall. But it seems likely that insurgents, too, have managed to pass through the checkpoints, or found other routes into the city. Recently, the new Iraqi government has been issuing its own I.D. cards, which allow ministry officials to cross the checkpoints, and Marines have been finding dozens of forgeries.

Months earlier, a resident had to carry an I.D. issued by the first Marine division to enter the city. "Now they're coming through with teacher badges and Ministry of Oil badges, and all these [other] crazy badges. We've been here long enough to filter through them, but about half the badges we get are fake," said one Marine on condition of anonymity. "The last couple of months, these new badges have been showing up, and they've been letting the Iraqis use them."

In Fallujah, the Marines have won when insurgents came out into the open. A few days before the suicide attack, in a southern neighborhood of Fallujah, a small unit of U.S. forces called a combined antiarmor team arrived as dozens of insurgents were setting up an ambush. In the firefight that followed, the Marines battled their way through a carefully designed maze of roadside bombs, car bombs, rockets and machine-gun fire. The Marines in the small convoy managed to overtake the insurgents' positions and killed many of the attackers without taking a single casualty. There were no reporters present when the incident took place, but five members of the unit later described the progress of the battle, drew diagrams and established timelines for events. Marines in Lima Company were able to corroborate many of the events in the timeline.

The bomber struck the convoy June 13 inside the secured part of the city, on Route 10. Because vehicle traffic into the city is tightly controlled, there is a strong possibility that insurgents assembled the bomb inside Fallujah. Another striking aspect of the account is the description of the way the bomber waited for the first two armored Humvees to pass and then chose the crowded seven-ton truck as his target. U.S. Marines often travel in the seven-ton trucks, many of which have steel armor that will stop a bullet from an automatic rifle. But the thin steel plate turns into shrapnel when hit by more powerful weapons. Many of the Marine seven-ton transports are lightly armored, however, and because they can carry as many as 18 people they're a prime target of suicide attacks and large roadside bombs. It is also true that the bomber could not have easily approached the truck from the back of the convoy, since he likely would have been killed by turret gunners on the rearmost Humvees. It seemed that he had carefully picked his approach to coincide with the seven-ton.

U.S. commanders are trying to walk a delicate line between allowing Iraqi citizens back into the city and giving Iraqi officials more say in the city's affairs, but as the security situation gets worse, they are likely to err on the side of caution and limit Iraqis' autonomy in deciding who gets back in.