Getting real on Africa

If President Bush is serious about fighting African poverty, here are 10 things he should do. 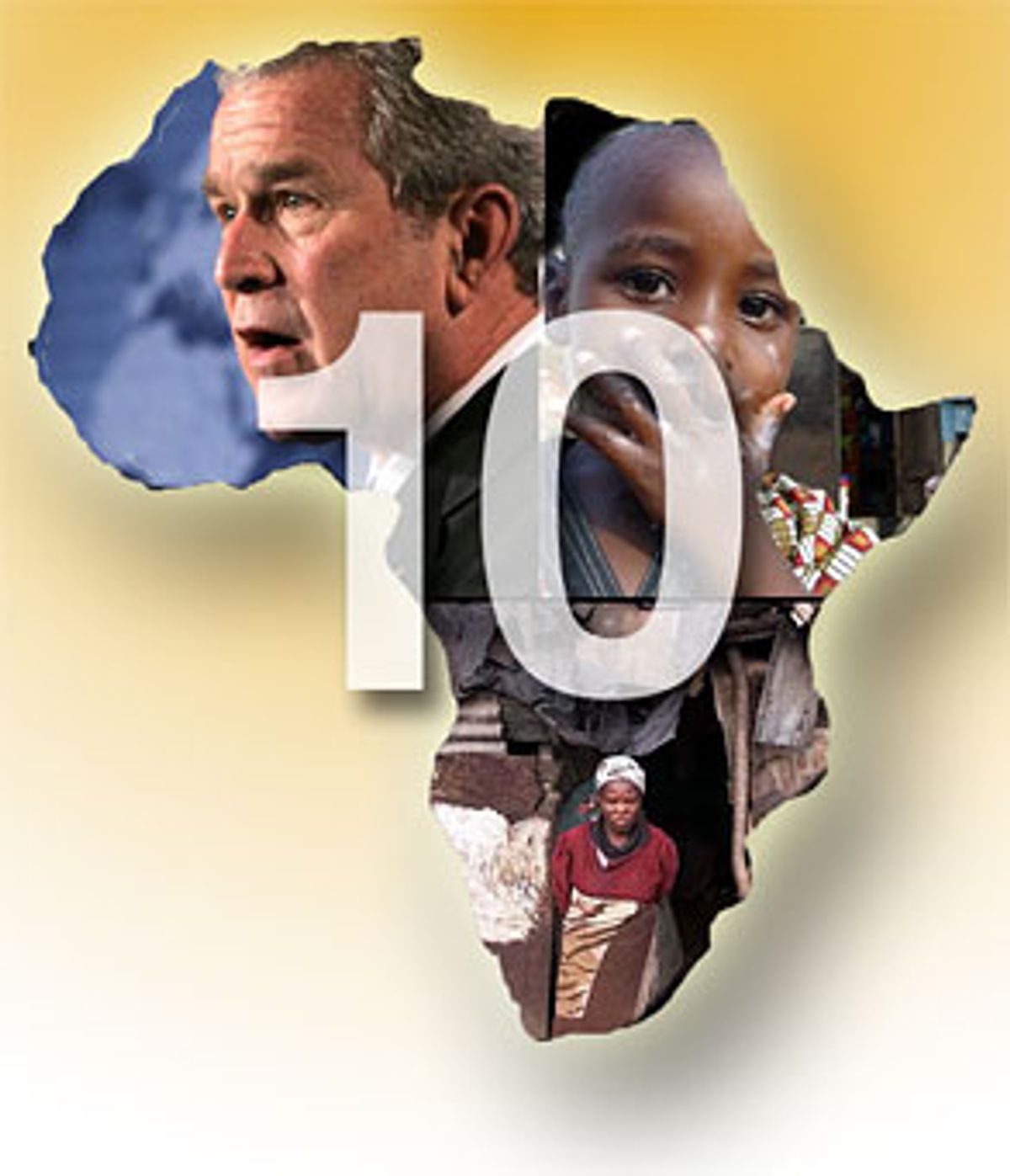 On the eve of the G8 summit in Gleneagles, Scotland, President Bush deserves some credit for his proposals to address the lot of Africa's roughly 850 million people. Bush's promises to double U.S. aid to Africa, to cancel the debts of Africa's 18 most heavily indebted nations, and to up funds for AIDS and malaria all tackle issues that matter in ways that will have an impact. But all told, these measures fall well short of amounting to a comprehensive strategy for Africa.

The administration promotes the impression that Bush is leading a drive to eradicate poverty and stem the African continent's many other woes. For now, these claims are overstated. Under heavy pressure from British Prime Minister Tony Blair and at a moment when the U.S. badly needs to improve its global image, Bush has chosen proposals that sidestep some of the biggest questions about Africa's future. Bush's critics have focused mostly on his failure to do enough for Africa. They complain that the U.S.' allotment for overseas development assistance falls far below the .7 percent of GDP target that the most generous European nations are hitting. Reaching .7 percent would require a fivefold increase in U.S. spending on development aid, something the administration has flat-out rejected.

But in addition to asking for more funds and pressing the administration to make good on its newest pledges -- the purported doubling of aid monies actually falls far short of that -- Africa's advocates should demand that important gaps be filled if Bush is to style himself as Africa's protector and benefactor. They should press the administration to go beyond discrete pledges and programs and adopt a more comprehensive approach to addressing the continent's many needs. Regardless of which motive is paramount, moral outrage over the suffering and underdevelopment on the continent or fear that Africa's plagues -- disease, terrorism, failed states and environmental degradation to name a few -- may ultimately hit our own shores, a more systematic approach to an Africa policy is the right one.

Here are 10 things President Bush could do to show he's really serious about Africa.

1. Make good on existing promises. Perhaps the biggest weakness in Bush's newest announcements on Africa is his track record of leaving similarly ambitious proposals underfunded and underfulfilled. Doubts about whether Bush will deliver have not surprisingly undercut positive reactions to these latest ideas. It has taken more than three years for Bush's Millennium Challenge Account (MCA) to begin disbursing funds. As of this spring just one country, Madagascar, had seen a cent and just 2 percent of the appropriated funds had been spent. Amounts pledged to fight AIDS in Africa have also been vulnerable to repeated lowballing in the administration's budget requests. To rebuild trust, Bush should make clear that these new promises will be accompanied by a push to satisfy the old ones.

2. Launch a major push on vaccine availability. One of the less noticed but potentially pathbreaking outcomes of pre-G8 summit finance minister meetings was an agreement to expedite efforts to pre-purchase massive quantities of newly developed vaccines for distribution in African countries. The administration historically has been loath to intervene in the pharmaceutical industry's practices for making treatments and vaccines cheaply available in poor countries. U.S. leadership will be critical to this plan, and Bush should provide it. (Check out this blog for more details on how the plan will motivate faster vaccine development.)

3. Stop lumping all of Africa together. A key first step toward understanding and addressing the African continent is to recognize racial, socioeconomic, environmental, cultural, military, religious and political diversity within it. Some nations -- South Africa and Nigeria, for example, are key U.S. military and economic allies; others, like Congo and Sierra Leone, are in disarray and virtually without hope. By refusing to lump all of Africa together either rhetorically or through policies, Bush can pave the way for approaches that better reflect a polyglot region.

4. Address each stage of development. Whereas the MCA is targeted at Africa's most capable governments, and the latest debt initiative aims to help the very weakest, most of Africa's nations fall somewhere in between and aren't getting much out of the new Bush programs. A comprehensive strategy to address poverty in Africa needs to address countries at every stage of development. Missing pieces include debt relief for more nations (Nigeria has already been singled out to get a break), aid to African entrepreneurs and small businesses, and infrastructure/job creation programs.

5. Create a governance aid program. The Bush administration has rightly pointed out that hundreds of millions of dollars in development aid for African countries have historically been plundered and wasted by corrupt and/or inept governments. This is why the MCA gives only to countries that meet strict governance criteria. Rather than simply citing the problem and rewarding those who have overcome it, the U.S. should lead a major push to strengthen governance structures in countries that have the will to improve. Working with multilateral and private organizations, we should be training African lawyers, judges, accountants and auditors and sending in pro bono professionals of our own (as we've done in Eastern Europe, Afghanistan and Iraq) to address the stranglehold of corruption on Africa's progress.

6. Channel more aid through NGOs. Where corruption and misuse of funds are a concern, rather than closing its purse the administration should channel substantial additional aid not through governments, but via private groups that have good track records of delivery. Particularly for the provision of basic food, medical and other services, non-governmental groups are often well-placed to get the job done. Where possible, local African groups should be empowered as conduits. Governments' incompetence and untrustworthiness should not be an excuse for ignoring the needs of people suffering under these hapless regimes.

7. Take action on Darfur. After the Rwandan mass killings in 1994, lofty pledges were made about how the West would never again fail Africa so completely. But more than a year after calling the situation in Darfur genocide, the Bush administration has done little to stop it. As for what can be done short of military intervention, there's plenty outlined here.

8. Help Zimbabwean opposition groups. The attitude of top leaders like South African President Thabo Mbeki to Zimbabwe's unfolding crisis illustrates just how contorted relationships with the West have become. Many African heads of state reject Western outrage over Mugabe's abuses on grounds that so many other, even more grave, catastrophes on the continent have been ignored -- and in some cases abetted -- by the West. But Mugabe's opponents include local human rights activists closely aligned with those that fought apartheid and brought Mbeki's African National Congress to power. It's hard to see how African leaders could reject support for these sorts of organizations.

9. Explore AFTA. Bush has fought for CAFTA, now how about AFTA -- an African free trade agreement that would do away with the nearly $4 billion a year cotton subsidies that have hobbled yeoman farmers in places like Burkina Faso. There is no powerful political or business constituency for an African trade accord, but it would be consistent with Bush's stance on trade and would benefit Africa to the tune of, according to Oxfam, some $150 billion per year. Crucially, those benefits would come not from handouts, but through the growth of entrepreneurship and private enterprise. Bush says he's waiting for the Europeans to follow suit before initiating such an accord. Rather than resting on that excuse, Bush should press ahead.

10. Develop aid partnerships. One of the concerns American aid officials like USAID chief Andrew Natsios cite in relation to aid for Africa is worry over perceived imperialism. After all, the history of Western involvement on the continent is not pretty. Rather than funneling aid directly, what about partnering with, say, the South African foreign ministry to pilot a program where aid would be administered by African countries with competent ministries and strong records of anti-corruption, but without a heavy Western hand?

Suzanne Nossel is a former senior advisor at the United States Mission to the United Nations and is currently a senior fellow at the Security and Peace Initiative, a joint project of the Center for American Progress and the Century Foundation. She is the founder of the Democracy Arsenal blog.