Donors who poured billions into Uganda have hyped its progress, but President Museveni has proven to be just another corrupt despot. Will Bush support democracy -- or stand by an ally? 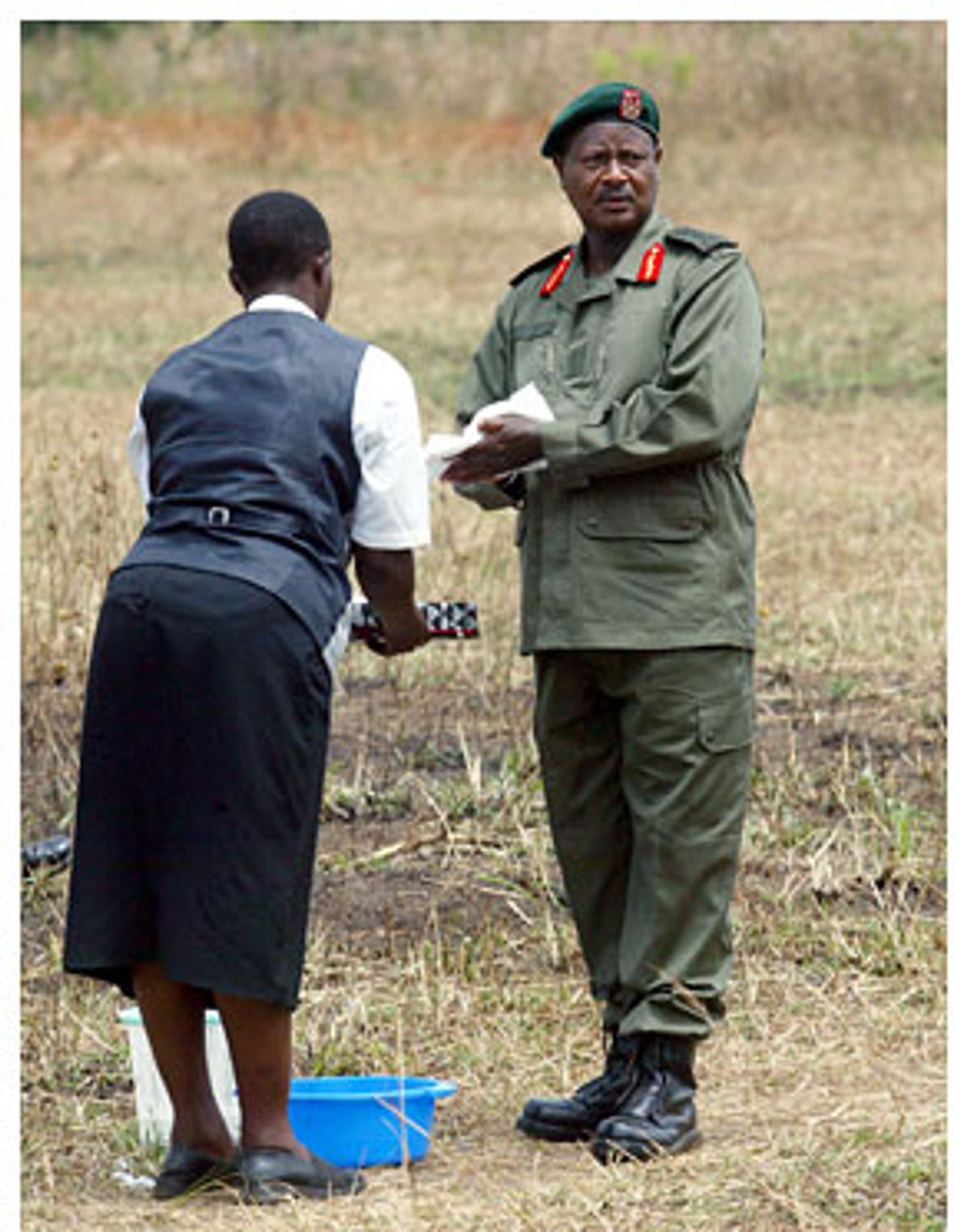 In front of Parliament, traces of tear gas lingered in the air, mildly stinging the eyes of opposition demonstrators and passersby. Riot police remained at the ready, should anyone attempt to launch another protest. Inside, members of Parliament, not a few of whom had been compensated in advance for their compliance -- roughly $2,800 apiece, a hefty sum -- voted overwhelmingly last Tuesday to lift the presidential term limits enshrined in the country's constitution.

The Ugandan constitution is only 10 years old, but it is already in the process of being amended. Pending another vote in Parliament later this month, it appears inevitable that President Yoweri Museveni, in power for two decades, will get yet another term. His critics say he wants to be president for life.

Museveni's most recent power grab may sound like something George W. Bush should condemn, given the U.S. president's push for democracy around the world. And coming only a week before the G8 summit, as Bush demands "good governance" in exchange for U.S. aid, you would think Museveni's actions and the Parliament's approval would merit a rebuke. But there's a catch: The Ugandan president happens to be a staunch U.S. ally on major issues like the war in Iraq and HIV/AIDS. Museveni represents a first major test for Bush's Africa policy and Bush's will to confront undemocratic regimes even when they're friendly to his administration.

Museveni, hailed as an "African renaissance" leader by Bill Clinton in 1998, now bears more than a passing resemblance to the nearly disappeared African strongmen of the past. While Museveni's legions of sycophants and cronies celebrated the results last Tuesday in Parliament, not a few Ugandans remained less sanguine about the future of their country. "It is the spirit of what they're doing," said Morris Ogenga Latigo, an opposition M.P., "that is changing what is put there as an insurance against bad governance."

Ugandans have certainly endured plenty of bad governance since the country's 1962 independence, despite high hopes for success. Uganda experienced 15 years of violent, chaotic misrule by Idi Amin and Milton Obote, which shattered the country and bankrupted its economy. Museveni, a Marxist guerrilla leader, seized the presidency by force in 1986 and promised to provide a positive alternative to the poor leadership plaguing the continent.

To his credit, Museveni rebuilt Uganda into a functioning state by restoring peace and security to many areas, while introducing a series of economic and, to a lesser degree, political reforms. Museveni also addressed the HIV/AIDS pandemic by speaking out publicly at a time when his presidential colleagues throughout Africa remained silent.

All of that impressed the donors -- the World Bank, the International Monetary Fund and Western countries, including the United States -- who have invested more than $11 billion in Uganda since 1986. In diplomatic and international aid circles, Uganda became widely known as an "African success" story on a continent where successes were few and far between.

Yet the success and the story are largely a creation of the donor community. Donor money has fueled economic growth and reduced poverty, built roads, put millions of children into primary school, helped the healthcare system, built democratizing institutions, and generally stabilized the country, according to economists. Despite that aid, the country is still struggling. More than two-thirds of Ugandans survive on hand-to-mouth agriculture, according to the country's Bureau of Statistics, while less than 10 percent of the country has access to electricity. Even the number of poor people is rising after years of decline.

Critics of international aid say donors have hyped Uganda as a success story to justify their efforts. "It was not so much what was happening in Uganda, but what the international aid community wanted to project to the world, wanted to project to their key constituencies in the Western world who contribute this money," said Andrew Mwenda, a Ugandan journalist and analyst who argues that foreign aid doesn't help the poor.

Meanwhile, a leaked consultancy report for the World Bank, obtained by Salon, indicates that corruption is endemic because Museveni's regime is committed to staying in power no matter the cost. "Several of those closest to the president are among those alleged to have benefited from a range of questionable business deals ... that would not have been possible were it not for their proximity to the head of state. The group is a mixture of family and friends," according to the report.

That group includes two Cabinet ministers now with senior portfolios who faced Parliamentary censure in 1999 for alleged conflicts of interest, and Salim Saleh, Museveni's half-brother, who was named by a U.N. Security Council panel of experts for illegally exploiting the Democratic Republic of Congo's resources.

Saleh's wife, Jovia Akandwanaho, was also named by the U.N. report for her interest in diamond exploitation; the U.S. Embassy in Uganda has declared her ineligible for a visa to the United States under a 2004 law reserved for people who have used an official position to accept bribes or enrich themselves illegally or who have offered bribes.

That's the short list: There are corruption allegations against other Cabinet ministers and former army commanders. What festers at the top extends throughout the rural areas in the form of cash and contracts to its supporters, according to the leaked consultancy report.

"The fact that corruption is a drag on Uganda's economy is unmistakable and probably rising," it says. "That it has not had a greater downside effect to date is no doubt a reflection of the fact that it is largely, though indirectly and unintentionally, financed by the donor community."

No one believes -- neither donors nor Ugandans --that the regime has the will to reverse the trend. Nor are donors, including the United States, warmly embracing the prospect of a third term for Museveni. They point out there has never been a peaceful transition of power in Uganda's history.

The leaked report warns that the prospects for political turmoil are high "barring the surprise of a graceful retirement by the president," which now seems unlikely. However, opposition parties have exited their "legal but not free" oblivion and can now campaign, a marked change from the years of a one-party state under the banner of Museveni's National Resistance Movement. A July 28 referendum will ask voters if they prefer a multiparty system or Museveni's Movement. However, a 2004 Human Rights Watch report details that opposition activists are routinely tortured in secret "safe houses" around the country. The government denies the allegations.

In U.S. circles, there's a growing feeling that the Bush administration should take a stand against Museveni. Johnnie Carson, now an official at the National Defense University and a former ambassador to Uganda, says the country is a success story turning sour. "Some argue that Museveni's unwillingness to move aside may also be motivated by a desire to protect those around him from charges of corruption," he said in a recent forum at the Woodrow Wilson Center for International Scholars in Washington, D.C.

Professor Joel Barkan of Iowa University, who was one of three authors of the leaked World Bank report, said at the same forum that the regime has probably seen its best days. "Having celebrated Uganda's success, the United States and the rest of the donor community should now acknowledge that the Museveni government is an increasingly corrupt and authoritarian regime that has probably overstayed its welcome," he said. "It should also be acknowledged that the current volume of aid, and budget support in particular, sustains this situation." Nevertheless, Uganda received more than $3 billion of debt relief from the G8, and foreign aid amounts to nearly half of its annual budget, which has been the case for several years.

Uganda presents the United States with the first African test of the Bush doctrine of promoting freedom and democracy, according to Barkan. "If the administration cannot pass the test here, where is the policy credible?" he said. "Uganda is not a 'hard case' like Egypt or Pakistan, where the United States might tread lightly on an authoritarian regime that is an ally in the war on terror or key player in the Middle East."

The Bush administration has taken a bit of action. Jimmy Kolker, the U.S. ambassador to Uganda, said that Uganda's endemic corruption prevented it from meeting the requirements of U.S. aid through the Millenium Challenge Corp. Only Madagascar has qualified for any money.

Barkan has urged the administration to put Uganda on its agenda so it can review where the country fits within the U.S. objectives in East Africa. He suggested the administration should yet again, as President Bush and former Secretary of State Colin Powell did in the first term, call on Museveni to honor term limits. He also encouraged donors that fund Uganda's budget to establish a common set of criteria regarding issues of corruption and the current political transition.

On the issue of HIV/AIDS, perhaps Uganda's greatest success story, Museveni may be bowing to U.S. demands in order to keep the aid flowing. The U.S. has poured millions of dollars into Uganda as part of the President's Emergency Plan for AIDS relief, making it conditional on abstinence education, according to Human Rights Watch.

That's a startling turnaround for a country known for the now-famous ABC formula: abstain, be faithful or use a condom. No one doubts that the formula succeeded in reducing HIV/AIDS infection in this country before the arrival of antiretroviral drugs, because there was little money and no other tool in its arsenal.

But Ugandan evangelicals, including Museveni's wife, Janet, publicly campaign against condoms with greater vigor than they did in the past. The head of one nongovernmental organization privately speculated to me that the embrace of abstinence is Museveni's attempt to placate the United States in his bid to remain in power.

Whether that's true is not clear, but American diplomats on the ground have delivered clear messages to Museveni about his country's future.

"Of course, constitutions and elections are acts of sovereignty. Ugandans are going to make the decision," Kolker said. "But the United States from President Bush and all of his administration have made the point that the constitution shouldn't be changed without giving very careful thought to the consequences."

Blake Lambert is a journalist based in Kampala, Uganda.