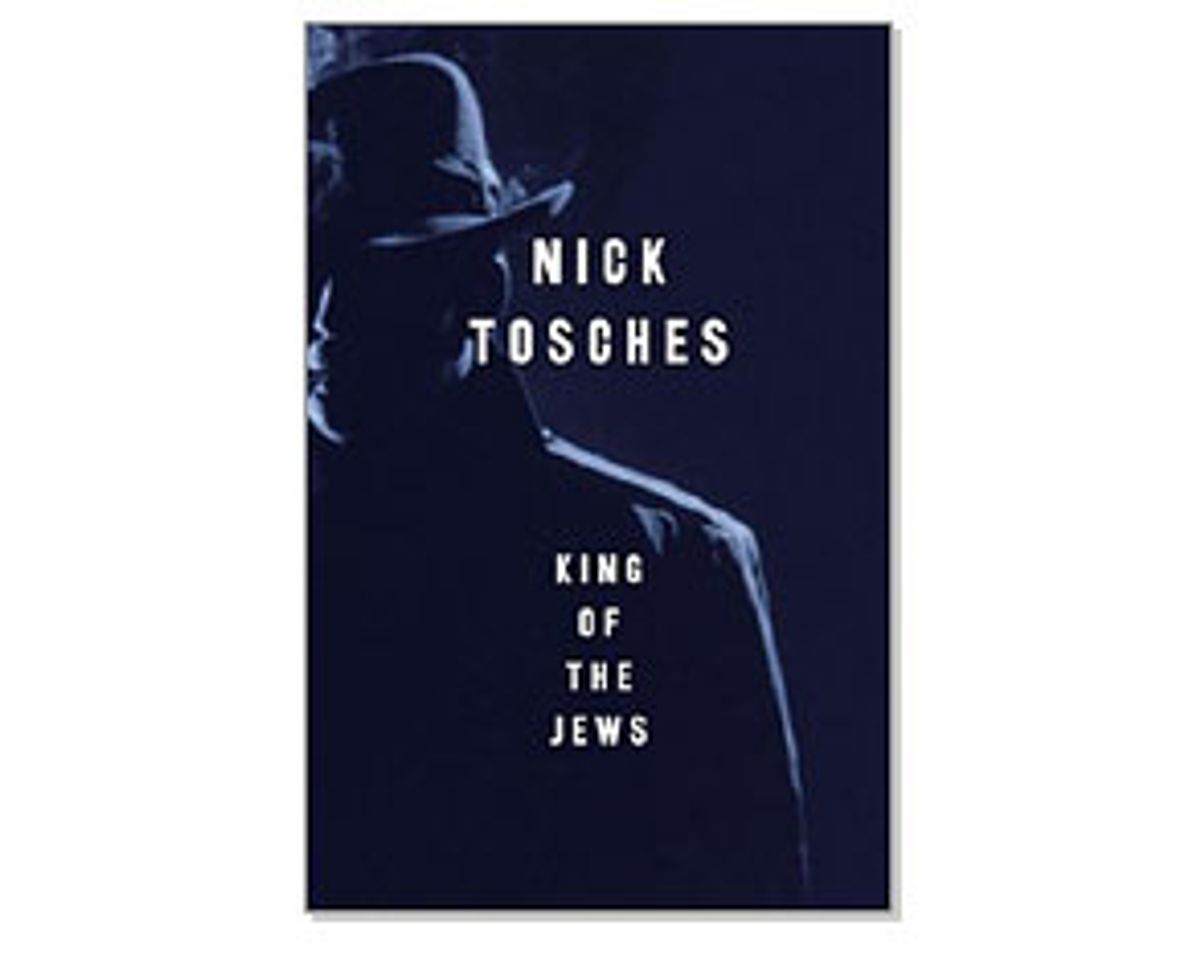 With the possible exception of Norman Mailer when he's on a roll, Nick Tosches might be the most distinguishable nonfiction prose writer in America today. Everything he writes is intensely personal and relentlessly idiosyncratic; all his books are driven by a ruthless insistence on not being like anything else that has come before them -- even another Nick Tosches book. So how do you tell a good Nick Tosches book from a bad one?

For starters, the good ones -- such as "Hellfire," his white-hot fan's notes on Jerry Lee Lewis, or "Dino," his plunge into the black hole of the life of Dean Martin, and even "Where Dead Voices Gather," his Holy Grail hunt to uncover the life and work of an obscure blackface performer, Emmett Miller -- draw you into Tosches' vision like a tractor beam in a sci-fi movie. His misfires, like "The Devil and Sonny Liston" and "King of the Jews," his new biography of the legendary gambler and seminal gangland figure Arnold Rothstein, don't let you in. They make you feel like an outsider in a strange land.

At his best, Tosches works through his obsessions until they crystallize into sentences that pop in your mind like mental flash bulbs. Let's mine a nugget from perhaps Tosches' most underated work, "Where Dead Voices Gather." Emmett Miller, he concludes, was at "the heart of 19th century show business, the first emanation of a pervasive and purely American mass culture." And "In the world as colored by Miller's voice, we are never far from Nightmare Alley ... for all his brilliance, he [Miller] belonged, at best, to the sideshow of the age, where all that does not conform, all that lies beyond the range of the lowest common denominator, brilliant and bad alike, is relegated to curiosity and in the end left on the church steps of posterity." By the end of that strange and passionate little book, a reader with true romance in his soul can't be satisfied until he has sought out Miller's music and tried to hear it through Tosches' ear.

As someone who shares his fascination for the dark frontiers of the American psyche, I'm always willing to go where Tosches wants to take me, knowing that the trail might lead to some fabulous treasure trove of forgotten or discarded artifacts that can change, if not the world, at least my manner of looking at it. But "King of The Jews" leads nowhere. It's like a jigsaw puzzle that, when all the pieces come together, don't form a picture but a perfect blank.

The real Arnold Rothstein was a financier, teacher and role model for hoodlums from diverse ethnic groups including Jews (Meyer Lansky), Italians (Charles "Lucky" Luciano), and Irish (Jack "Legs" Diamond). There is some truth to Tosches' hyperbole that "Arnold Rothstein was the first true and great equal opportunity employer." As a young man he cut such a dashing figure as to inspire Damon Runyon (who modeled the Nathan Detroit of "Guys and Dolls" after him), and by middle age, already a celebrity among the Broadway crowd and a crony of such celebrities as New York Giants manager John McGraw, he became openly notorious for his involvement in the 1919 "Black Sox" betting scandal. Jay Gatsby's friend Meyer Wolfsheim, the man who just "saw the opportunity" to fix the World Series in Fitzgerald's novel, was based on Rothstein. ("I've loved baseball," says Lee Strasberg's Meyer Lansky-modeled Hyman Roth in "The Godfather, Part II," "ever since Arnold Rothstein fixed the 1919 World Series.")

Tosches spends a great deal of unnecessary effort swiping at earlier depictions of Rothstein. Did we really need to be told that Runyon's caricature, Nathan Detroit, isn't historically accurate? He attacks Fitzgerald for being grossly anti-Semitic -- and his Meyer Wolfsheim probably is -- but Tosches seems to bring it up only for the purpose of taking a cheap shot that dismisses all of Fitzgerald's work. Leo Katcher's entertaining and highly colored 1959 biography of Rothstein, "The Big Bankroll," becomes a straw man set up for Tosches to knock over. Katcher's book, Tosches writes, "is generally considered to be the classic biography of Arnold Rothstein. I remember reading and enjoying it a good many years ago, when I was even more stupid than I am today." Tosches isn't stupid today, he's just mean-spirited. "The Big Bankroll" isn't considered by any serious student of organized crime to be a "classic biography," but a collection of colorful stories and tales that grew in the shadow of Rothstein's legend. The classic biography of Rothstein is David Pietrusza's "Rothstein," from Carroll and Graf, published more than two years ago but of which Tosches seems to be unaware.

"It is not the artful novelist," Tosches writes, "who has blurred the divide between fiction and fact: it is the professor of learning, the peddler of secondhand misknowing ... It is better to keep away from words, 'facts,' 'knowledge.' They are almost always the carriers of disease." Yet less than 50 pages later we are treated to several paragraphs of conversation between Rothstein and the young Lucky Luciano on the subject of grooming and wardrobe. From what artful novelist, one wonders, did these quotes magically appear? (No source is listed.) Did Tosches simply divine what Rothstein and Luciano would have talked about in moments of leisure? Who, exactly, is peddling this misknowing?

Clearly Arnold Rothstein has stirred something in Tosches, but he's not sure what that is, and the result is we don't know either. "When I set out to write this book," he tells us, "I was intrigued by the figure of Arnold Rothstein. I still am. But as I researched more deeply, I came to see that the picture of him that history gave us was wrong. Was I to offer a different picture? Was I to take a man's life and make of it an exercise in interpretation? Was I to claim to have arrived at the 'truth'? Was I to fabricate a 'riveting portrait' by hiding one aspect of him and presenting another, without ever knowing -- who could? -- which aspect of him held weight and meaning for him, in his life, as he lived it? This would be to compound the misknowing that already was." I wanted to scream in exasperation at this passage: Well, what's it to be, then, Nick? If all you're going to tell us is that other people before you had it wrong without taking the responsibility of telling us what you think is right, then why did you write the book in the first place -- particularly when nothing you offer us fundamentally alters the picture of Rothstein given us by earlier writers?

But then, less than a page later, Tosches tries to answer his own rhetorical questions. "Why Rothstein's life? ... Because Arnold Rothstein is a shadow figure beyond good and evil ... And if that shadow is ultimately unknowable, as it must be, I was resolved that it should not go ultimately misknown, or wrongly known, as it had been. Let others tell you the shade and length of Christ's hair without offering a single bare fact establishing his existence." Is Tosches attempting some kind of existential riddle with Rothstein as a hipster Jewish martyr set up to deny the existence of Christ?

I get the uneasy feeling here that Tosches is using Rothstein to muscle in on Christ's territory -- please excuse the gangland terminology, but somehow it seems oddly appropriate here -- as king of the Jews. The truth is, though, that I really don't know where Tosches is trying to go. How exactly is a man who fixed ball games and horse races and who financed dope dealers and killers "beyond evil"? If those things are beyond evil, then what is evil? Does he mean "beyond evil" in a Nietzschean sense? Or in a purely legal sense, because the law never caught up with Rothstein? (He was shot to death after a card game in 1928 following what appears to have been a rather trivial personal dispute. Tosches, to my knowledge, is the only writer who appears to find something mysterious about Rothstein's killing.)

And what does it mean that Arnold Rothstein is a "shadow figure" and that "that shadow is ultimately unknowable"? Perhaps he would be less shadowy and more knowable if Tosches hadn't spent nearly a third of his book meandering from the origins of Jewish names to the history of dice before getting to his subject. And is he saying that Rothstein is more unknowable than other denizens of the demimonde? Or is Arnold Rothstein's a special case of unknowableness? And if Rothstein is so unknowable, then what does it matter that his shadow is "ultimately misknown, or wrongly known"? If he's unknowable, then how does Tosches know that somebody else's Rothstein is wrongly known?

Is Tosches trying to tell us that everyone is, in the final analysis, "unknowable"? Great, that's sure what I want to fork over my $25.95 to hear. I'm reminded of the old Woody Allen routine: "What if there is no reality? What if existence is an illusion?" Answer: "In that case, I definitely overpaid for my carpet." If the author thinks the subject of his book is "ultimately unknowable," I want my money back. No, better still, I want him not to have written the book and taken up my time.

The minor league myth of Arnold Rothstein isn't big enough to hold all the metaphors, mysteries and metaphysical baggage that Tosches tries to cram into it. Rothstein isn't a big enough subject for Nick Tosches' talent. "King of the Jews" is a work of hero worship without a hero.