Me & the chocolate factory

I've seen the original "Willy Wonka" 27 times, but I'm going to skip the remake. How could Tim Burton possibly improve on one of the best movies ever? 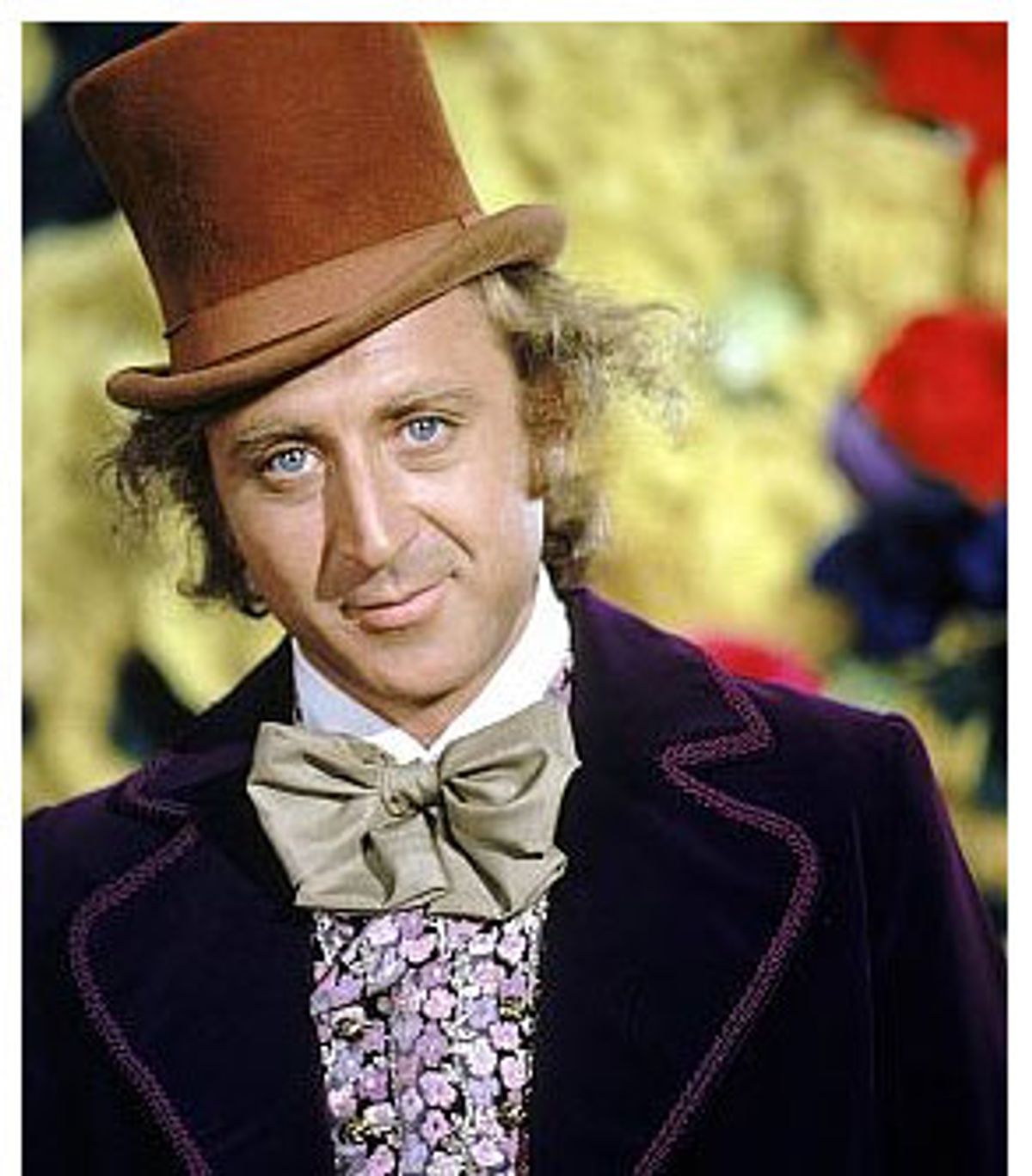 This is no knock on the director, Tim Burton. I enjoyed "Beetlejuice" and "Edward Scissorhands" and, well, I haven't seen any of his other films, but I'm sure they're fine too, in a goth-fairy tale sort of way. It's just that Burton is way out of his league with "Willy Wonka," because the original version, released in 1971, is one of the most important films in the history of cinema.

Answer: Because I have seen it 27 times (not including the three times I watched the film in preparing this piece, which was supposed to be just once, but hey, what can I tell you -- it's that good).

I should be forthright in noting that I had a special interest in "Willy Wonka," as a result of a lifelong and rather well-documented candy addiction. I was the kind of kid who thought about candy incessantly, who dreamed about it, who organized his Halloween booty according to a hierarchy that somewhat shames the Dewey Decimal System.

I was also 6 when "Willy Wonka" hit theaters. I don't remember much about that year. But I do remember sitting in the darkened theater, as lustrous images of liquid chocolate in mass production rippled over me. I was dumbstruck with gratitude.

I didn't even mind that the film had musical numbers in it (something I would not have otherwise tolerated) because they were all linked to candy. I remember humming the chorus to the song "The Candy Man" -- Talk about your childhood wishes/ you can even eat the dishes! -- for months after seeing the film.

The plot, based on Roald Dahl's excellent book "Charlie and the Chocolate Factory," runs like so: The reclusive chocolate maker Willy Wonka decides to hold a contest. Five lucky kids who find golden tickets inside his Wonka bars will receive a lifetime supply of chocolate, along with a personal tour of his super-secret factory.

The result of this contest, as we are breathlessly informed by news anchors, is Wonkamania. What follows is a biting, and remarkably prescient, satire of the modern media shark feed; there is simply no other story being told in the popular culture at that moment.

In one scene, a frail young man tells his psychoanalyst about a dream.

"To believe in one's dreams is a manifestation of insanity," the doctor informs him, in a heavy German accent.

"But I dreamed the arch angel came to me and revealed to me the precise location of a Wonka golden ticket."

The doctor looks stunned. "And what exactly did he say?"

"Well, what difference does that make?," the patient objects.

"Shut up," the doctor shrieks, "and tell me where the ticket is!"

It is at this point that, even at age 6, I intuited that the filmmakers were going for something a little more sophisticated than "The Apple Dumpling Gang."

This was the genius of "Willy Wonka" -- it dared to defy demographic mandates. The humor was broad enough to appeal to kids, but sophisticated enough to reward grown-ups.

I can happily affirm this, as I watched the film (for a third time in one week) with Anabel (age 7) and Jake (age 4), both of whom had also seen the film before, multiple times, and claimed to have better things to do, but nonetheless fell rapt under its spell. Such is the effect of Willy Wonka. It is crack cocaine to the candy freak. And as an adult, the film has become even more enjoyable for me to watch, because I now understand gags like the endless non-indemnity clause that the contest winners have to sign before entering the factory.

Another great thing about the movie is that the kids in it -- the contest winners -- are not your standard Disneyfied vessels of innocence. On the contrary, they are as corrupt as the adult world around them: the petulant, screaming Veruca Salt, the gluttonous Augustus Gloop, the shrill, gum-chomping Violet Beauregarde.

My favorite was Mike Teavee, who seemed to represent, at age 8, a protean American vulgarity. We first encounter him in the thrall of a TV western (he watches around the clock) shooting at the screen with his cap gun while reporters stick microphones in his face.

One of the reporters asks Mike if he likes guns.

"Not 'til you're twelve, son," his dad says fondly.

The one good kid in the film is Charlie Bucket, the blond mop top who (of course) finds the final ticket. Charlie is everything the other kids aren't: sweet, humble, hardworking and poor.

This last fact bears mentioning, as American film culture is famously reluctant to confront, in any way, the existence of poverty in the midst of our generalized profligacy. Movie poor people never look much like real poor people.

Charlie Bucket does, though, down to his ragged wool sweater. There is no dad in his family, just an overworked mom and four invalid grandparents who sleep in the same bed. They eat cabbage soup for supper. I remember being astonished when Charlie, in an effort to find his grandpa Joe's slippers, peeks under the bed. There are chamber pots, a concept my mother reluctantly explained to me.

"Willy Wonka" was made long before the era of special effects replaced character development as the top priority in Hollywood. And yet the factory itself, from the chocolate waterfall to the lickable wallpaper, still feels utterly convincing. I've spent years dreaming about the dainty teacup that Wonka sips from, then bites into.

Then there is Gene Wilder, who plays Wonka as a wild-haired eccentric. It would be impossible to convey the brilliance of Wilder's performance on paper. So much of it resides in body language, inflection, facial expressions. But I should mention that it did not occur to me, until I saw "Young Frankenstein" a few years later, that Gene Wilder was merely an actor playing the part of Willy Wonka; I thought Wonka was an actual person.

Wilder's charm derives from a curious blend of lunacy and insight. He mutters strange asides in foreign languages, quotes Shakespeare, and bursts into manic fits of rage. In what is no doubt the creepiest scene this side of "The Shining," Wonka takes his charges on his custom-designed paddleboat, the Wonkatania. Wonka steers into a dark tunnel. The score grows menacing. Soon, huge, disturbing images are flashing on the walls -- a worm crawling across a man's neck, a chicken decapitated with a cleaver. The children are terrified, which seems to be the whole point. Rather than comforting them, Wonka begins to recite Blakeian couplets, his voice building to an apoplectic screech, while colored lights scroll across his face.

There's no earthly way of knowing which direction we are going ... Not a speck of light is showing ... Is the grisly reaper mowing?

This scene scared me witless as a kid (it still does). But I found it strangely exhilarating also, a revelation of the anarchic danger of our fantasy life.

This is Wonka's whole thing: He honors the imaginative capacities of childhood without kowtowing to its solipsism. I am thinking of the moment when, confronted by a whinging Veruca Salt, he stares into her eyes and whispers reverently, "We are the music makers and we are the dreamers of dreams."

Wonka is fabulously unfazed when, one after another, the kids break the rules and suffer ignominious fates. Augustus Gloop, for instance, topples into the chocolate river and is sucked into a giant pneumatic tube and sent hurtling toward the fudge room. Wonka knows these kids are completely out of control -- doomed by their own indulgences. By the end, the only one left is Charlie Bucket, to whom he bestows the chocolate factory.

As a kid, I wanted desperately to be Charlie, to be that good, that pure of heart. I wanted to be the kid who resisted his own cruel and selfish impulses and lived happily ever after. I don't mind telling you that I still tear up at the end of the movie.

Most of all, I wanted to be the kid who won an entire chocolate factory. I was obsessed with this idea, and it dogged me into adulthood. I recently wrote a whole book about candy, expressly so I could get myself inside a few small factories.

The great unsung irony of the original "Willy Wonka" is that it was funded by the Quaker Oats Company, which hoped to put out a Wonka bar. The money people, in other words, saw the film as a promotional vehicle. But the candy bar never made it to market.

As for the new film, it has been accompanied by the expected cavalcade of product tie-ins, the most intriguing of which (to me, anyway) is the Wonka Donutz bar, a ring-shaped chocolate thing speckled with colored nonpareils. It takes some getting used to; it contains a ganache-like chocolate filling inside a milk chocolate shell, and these two elements, along with the crunchy nonpareils, created a kind of textural triple whammy.

But the Donutz bar should do just fine. So will the new film. Still, all of this poses a more basic question: Why remake a masterpiece? Does the world truly need Johnny Depp done up as Michael Jackson, defiling the memory of Gene Wilder? Does it need to tally the candy-coated thrills $50 million in CGI technology can buy?

"Everybody has had one and one is enough for anybody," Wonka tells the greedy children who demand a second Everlasting Gobstopper.