Yes, this movie contains real sex, not simulated. It's also a real love story about real characters and is really fascinating to watch. 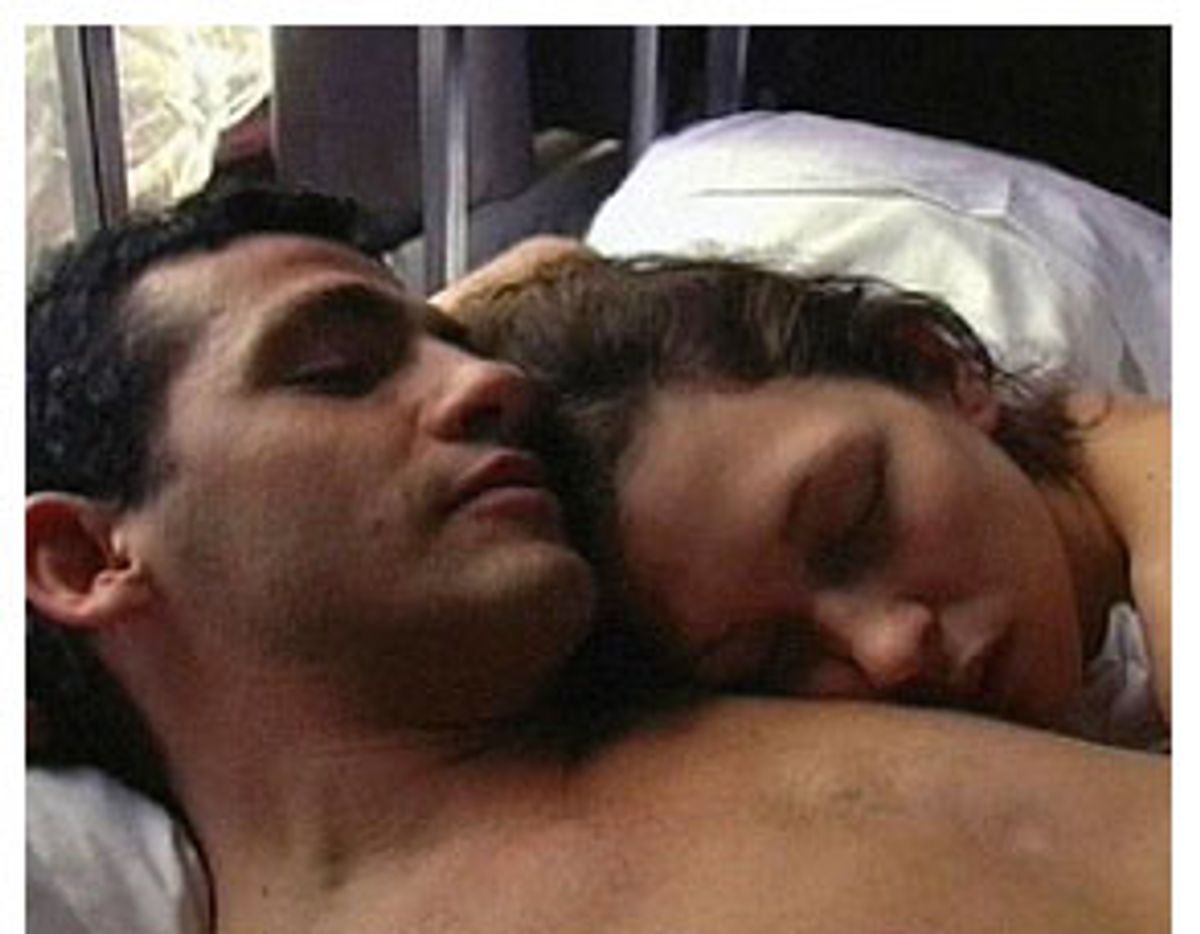 You could reduce Michael Winterbottom's "9 Songs" to its barest elements, sex and music, and leave it at that. Some critics and moviegoers undoubtedly will do so, although probably more out of boredom (genuine and affected) than prudery: "9 Songs" features real, not simulated, sex, and although that immediately makes it at least potentially controversial, the reality is that fewer people -- at least the people who go to see indie movies like this -- actually get hot and bothered about such things than we'd like to believe.

But while "9 Songs" is sexually explicit in the basic sense, its directness is what's most fascinating, and ultimately most moving, about it. The first time we see the actors, Kieran O'Brien and Margo Stilley, making love, we're jolted by the realization that what we're watching isn't a coy simulation carefully orchestrated for the camera. "9 Songs" is a direct challenge to any moviegoer who has ever complained (and I'm one of them) about the "bedsheet bandeau" so often used to shield an actress's breasts from the camera during a sex scene, or the clever contortions cameramen will go through to avoid an inadvertent flash of penis.

Winterbottom has said that such "fake" sex has often bothered him, too, which was one of the reasons he wanted to make this movie. But if "fake" sex makes us hoot or groan with derision, watching "real" sex presents a new set of responses altogether. They're surely different for every viewer, but my own feelings included curiosity about both of the actors' bodies, about their shadowy bumps and hollows and about the ways the performers responded to each other's touch; a small bit of shame over my own voyeuristic interest in the characters' private universe, even though, of course, it exists precisely so I will look at it; and a sliver of embarrassment for the actors, not because they have anything to be ashamed of, but because I recognize how they've opened themselves up to the world in a way that few performers do.

Winterbottom and his actors have far different goals. "9 Songs" isn't titillating, at least not in a bang-up way. But its mournful eroticism burrows deep, maybe because we recognize these are not just bodies we're watching -- they're characters, stand-ins for people. Their names are Matt and Lisa, and, particularly in Lisa's case, we don't know much about their daytime lives -- in "9 Songs," the lives Matt and Lisa lead in bed are their real lives; all the rest is just a vague accessory to the people they really are.

And because this love story is told in flashback from Matt's point of view, we have a sense at the beginning of where it's headed. We're watching a couple enjoying the ultimate kind of closeness, knowing they're already in the process of flying apart. Matt is a glaciologist and studies ice formations in the Antarctic. He describes the Antarctic as a place where one can feel "claustrophobia and agoraphobia in one place -- like two people in bed." The suggestion -- one we see played out in Matt and Lisa's sex life, as well as in Matt's reflective assessment of their relationship -- is that he ended up loving Lisa more than she loved him. The fun and pleasure of sex are relatively easy to put on film. But subtler shades of feeling and doubt, which sometimes change almost from night to night in the early stages of a relationship, are harder to capture, and that's what Winterbottom gets here.

Matt and Lisa meet at a rock concert at London's Brixton Academy -- the act is Black Rebel Motorcycle Club, and their performance of "Whatever Happened to Rock 'n' Roll" is the first of the movie's "nine songs" -- and tumble into bed with each other afterward. We see them rolling around, nibbling at each other, relishing the small things before moving onto the bigger things. (It makes me think of Sly Stone in "Family Affair": "Newlyweds a year ago, but still checkin' each other out.") And working off the same motif -- first a concert, then a night of sex and sometimes a morning after -- Winterbottom and his actors work to chart the sexual wilderness of Matt and Lisa's affair in 69 trim minutes. (Is the running time itself a not-so-subtle joke?)

Sometimes the sex is shot so that we can't really tell what it is we're looking at; other times, there's no doubt -- the camerawork is alternately discreet and feral. (The picture was shot on digital video by Marcel Zyskind; the shooting crew consisted solely of Winterbottom, Zyskind and sound man Stuart Wilson.) We see the couple kissing, starting to caress, before an open window on a bright morning; the sun pours in, making little stars in between the points at which their bodies touch -- it's not a twinkly, precious effect but a dreamily romantic one, a visual metaphor for how dazzling, and how potentially blinding, erotic desire can be.

Before long, we've gotten so used to Matt and Lisa's bodies that their nakedness barely registers: Lisa is tall and lean, a willowy stretch of a girl with dark hair; Matt is wiry too, but more compact -- their bodies fold around each other with supple grace, partly because of their similar build and partly, of course, because they're so young. The characters are somewhere in their mid- to late 20s. We know a bit about what Matt does for a living, but Lisa is something of a mystery. She's American (Matt is English), she's a student on a leave of absence, and she has a job somewhere, doing something, but it doesn't seem to matter much to her.

We also see, from Matt and Lisa's conversations (as well as small clues that we pick up from their lovemaking), that Lisa isn't as well grounded as Matt is -- or, at least, she doesn't have as much invested in this relationship as he does. She starts making annoyed (and annoying) pronouncements: "Sometimes when you kiss me, I just wanna bite you -- and not in a good way." And "You are so boring today," pronouncing it "BO-ring," as if she were desperately, self-consciously trying to make a pedestrian word more interesting. We see Matt plunging into a cold sea as a declaration -- half joking, half not -- of his love for her. We see the two of them padding around naked in Matt's kitchen, making coffee as they chat and flirt. Matt cooks for Lisa, in the buff no less, but his efforts don't seem to interest her much, particularly as their fragile union begins to disintegrate.

You're probably thinking, Who is this woman, and how are we supposed to care about her? I think we're supposed to acknowledge her as difficult, maybe even unbearable. But sexual allure often transcends good sense. Winterbottom isn't interested in conventional narratives, or conventional anything, which means his movies don't always work. It also means his failures are often more interesting than other people's successes. In the case of "9 Songs," the idea of structuring a love affair around nine live concert performances (from the likes of Super Furry Animals, Primal Scream and the Dandy Warhols) makes perfect sense. In the execution, it can be a little dull: The performance footage has a static, narcotic quality, and it doesn't help that we see the performances from a distance. But in an odd way, even that works in the movie's interest: Like the characters, we can't wait to get home from the club and get to bed.

O'Brien is a professional actor (he has worked with Winterbottom on two other projects, including "24 Hour Party People"); Stilley is a model and has never appeared in a movie before. I can see nothing exploitive in the way Winterbottom films his two actors. And even if you end up feeling nothing for the characters, "9 Songs" is fascinating as a piece of work, a glimpse into process that we don't usually get to see: It's a snapshot of trust between two actors and their director. At the end of filming, the relationship disintegrates, and everyone goes home. One of the saddest things in the world is going to bed with someone for what you know is the last time. In this case, "It's a wrap" also means the end of the affair.