Dove has a worthy new ad campaign that tells women to embrace their curves. Too bad they're hawking cellulite cream 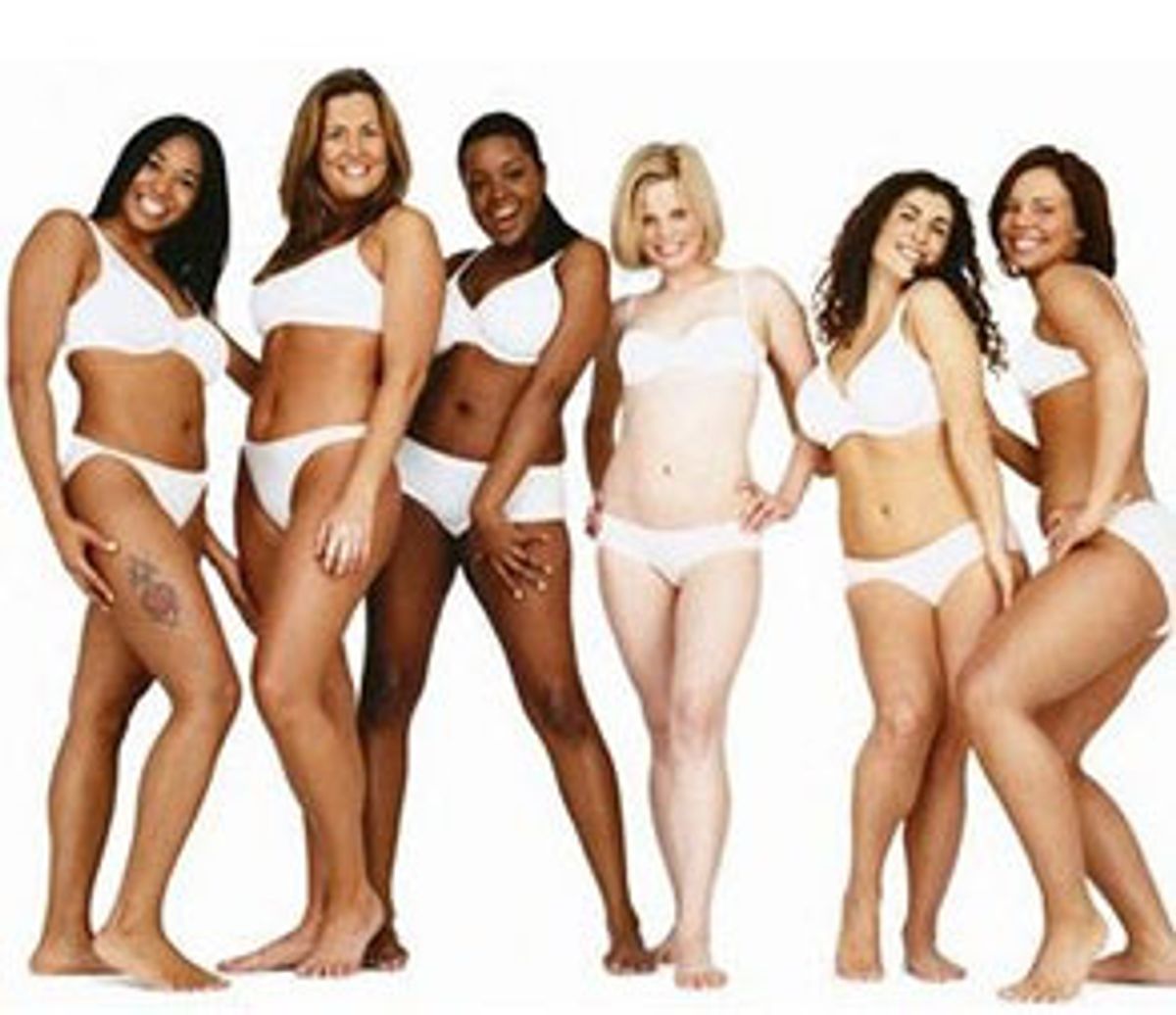 The words appear slowly, against the familiar powder-blue shape of the bird in flight -- the Dove soap symbol -- like soothing, watery poetry:

For too long
beauty has been defined by narrow, stifling sterotypes [sic].
You've told us it's time to change all that.
We agree.
Because we believe real beauty comes
In many shapes, sizes and ages.
It is why we started the Campaign for Real Beauty.
And why we hope you'll take part.

This is the lilting intro to the Web site that Dove has dedicated to its "Real Beauty" advertising campaign, for which it has picked six women who are not professional models -- each beautiful, but broader than Bundchen, heftier than an Olsen twin -- to model in bras and panties.

The campaign is massive; these six broads are currently featured in national television and magazine ads, as well as on billboards and the sides of buses in urban markets like Boston, Chicago, Washington, Dallas, Los Angeles, Miami, New York and San Francisco. And they've made quite an impact. Apparently, this public display of non-liposuctioned thighs is so jaw-droppingly revelatory that recent weeks have seen the Real Beauty models booked on everything from "The Today Show" to "The View" to CNN.

All the hoopla is precisely what Dove expected. According to a press release, Dove wants "to make women feel more beautiful every day by challenging today's stereotypical view of beauty and inspiring women to take great care of themselves." The use of "real women" (don't think too hard about the Kate Mosses of the world losing their status as biological females here) "of various ages, shapes and sizes" is designed "to provoke discussion and debate about today's typecast beauty images."

It's a great idea --- a worthy follow-up to Dove's 2004 campaign, which featured women with lined faces, silver hair and heavy freckles, and asked questions like, "Wrinkled? Or Wonderful?" and also got a lot of attention, including a shout-out on the "Ellen DeGeneres Show."

As Stacy Nadeau, one of the Real Beauty models and a full-time student from Ann Arbor, Mich., says on the campaign Web site, "I have always been a curvier girl and always will be. I am proud of my body and think all women should be proud of theirs too. This is my time to encourage and help women feel great about themselves, no matter what they weigh or look like. Women have surrendered to diets and insane eating habits to live up to social stereotypes for too long. It's time that all women felt beautiful in their own skin."

But let's hope that skin doesn't have any cellulite. Because no one wants to look at a cottage-cheesy ass.

That's right. The one little wrinkle -- so to speak -- in this you-go-grrl stick-it-to-the-media-man empowerment campaign is that the set of Dove products that these real women are shilling for is cellulite firming cream. Specifically, Dove's new "Intensive Firming Cream," described as "a highly effective blend of glycerin, plus seaweed extract and elastin peptides known for their skin-firming properties." It's supposed to "go to work on problem areas to help skin feel firmer and reduce the appearance of cellulite in two weeks." There are also the Intensive Firming Lotion and the Firming Moisturizing Body Wash, which do pretty much the same thing.

The ad copy on the posters -- in which the women stand alone, often looking over their rounded backsides -- is composed of sing-it-sister lines like "Let's face it, firming the thighs of a size 2 supermodel is no challenge" and "New Dove Firming. As tested on real curves."

Meanwhile, on its Web site, Dove encourages us to get behind something called "The Dove Self-Esteem Fund," which involves a partnership with the Girl Scouts (and a program called uniquely ME!). It is supposed to help "girls to overcome life damaging hang-ups by putting beauty into perspective." Yes, when I think of putting beauty in perspective for girls, mostly I think of suggesting that they shell out for three separately sold products that will temporarily make it appear that they have less cellulite.

It's not that I have anything against firming cream. By all means, sell firming cream! Go ahead! I'm even prepared to believe that it may be a useful tool for women who truly are plagued by their cellulite and are thankful to have a product that can help them combat it. I also understand that companies sell stuff. They advertise, they flog product; thus is life and business.

But as long as you're patting yourself on the back for hiring real-life models with imperfect bodies, thereby "challenging today's stereotypical view of beauty and inspiring women to take great care of themselves," why ask those models to flog a cream that has zero health value and is just an expensive and temporary Band-Aid for a "problem" that the media has told us we have with our bodies. Incidentally, cellulite isn't even a result of being overweight! It's the result of cellular changes in the skin. Skinny people have cellulite. Old people have cellulite. Young people have cellulite. Gwyneth Paltrow has cellulite. All God's children have cellulite.

Why not run an ad that proclaims, "Cellulite: Uniquely MINE!"

Or, more realistically, why aren't these women selling shampoo? Or soap? Or moisturizer?

Stacie Bright, a spokeswoman for Unilever, Dove's parent company, emphasized that this campaign "is for women of all shapes and sizes, and a lot of women want firming products. It's about feeling good about yourself. And that's about bringing products that matter to women." Pressed on the inconsistency of having women who feel good about themselves sell a product that makes a lot of us feel bad about ourselves, Bright replied, "Let's face it, if you had a firming product, and you had a size 2 woman selling it, that would really be the contradiction."

Clearly the idea behind the campaign is a smart, worthwhile and rational one. It does feel refreshingly non-self-loathing to log on to the Dove site and hear the models saying things like "I love these big ol' hips" and "I don't think about being slim." It's a little ray of sanity in this anorexic world.

But it's also a business proposition and an advertising campaign. And doing something radically different -- like presenting female consumers with models who actually resemble human beings they've met -- is getting these products a lot of coveted attention. In fact, Dove may have tapped a zeitgeist vein, since the sport of lashing out at manipulated images of female beauty seems to be enjoying a bit of a vogue right now.

This spring, Oscar-winning actress Cate Blanchett spoke in interviews about her horror at the Botox craze. "I look at people sort of entombing themselves and all you see is their little pinholes of terror," said the actress. "And you think, Just live your life -- death is not going to be any easier just because your face can't move." Blanchett also said that she thinks "that women and their vulnerabilities are played on in the cosmetic industry ... women are encouraged to be terrified of aging." In this month's Vogue, Kate Winslet says of her battle with the press over her normal weight, "I'm relatively slim, I eat healthily, I keep fit ... I couldn't be 105 pounds even if I tried, and I really don't want to be 105 pounds."

And in just over a week, Bath and Body Works in association with American Girl dolls, will launch a line of "Real Beauty Inside and Out" personal care products "designed to help girls ages 8 to 12 feel -- and be --their best." The line will include body lotions, splashes, soaps and lip balms, all dressed up in girl-friendly "hues of berry" and each arriving with an inspirational message like "Real beauty means no one's smile shines exactly like yours," "Real beauty is helping a friend," or "Real beauty is trusting in yourself."

It's a great gimmick -- one that few of us can take issue with. But just like Dove's "love your ass but not the fat on it" campaign, much of this stuff prompts grim questions about whether it's even possible to break the feel-bad cycle of the beauty industry. Blanchett, after all, recently signed on as spokeswoman for SK-II line of cosmetics. And while it's all well and good to tell 8-year-old girls that real beauty is about trust, it's sort of funny to think about doing it while selling them minty lip shine or fruit-scented "My Way Styling Gel" for eight bucks a pop.

Let them be. After all, they have decades ahead of them in which to worry about eradicating the cellulite from their really beautiful curves.