Ewan McGregor runs off with this completely baffling futuristic film, undoubtedly one of the strangest mainstream pictures of the year. 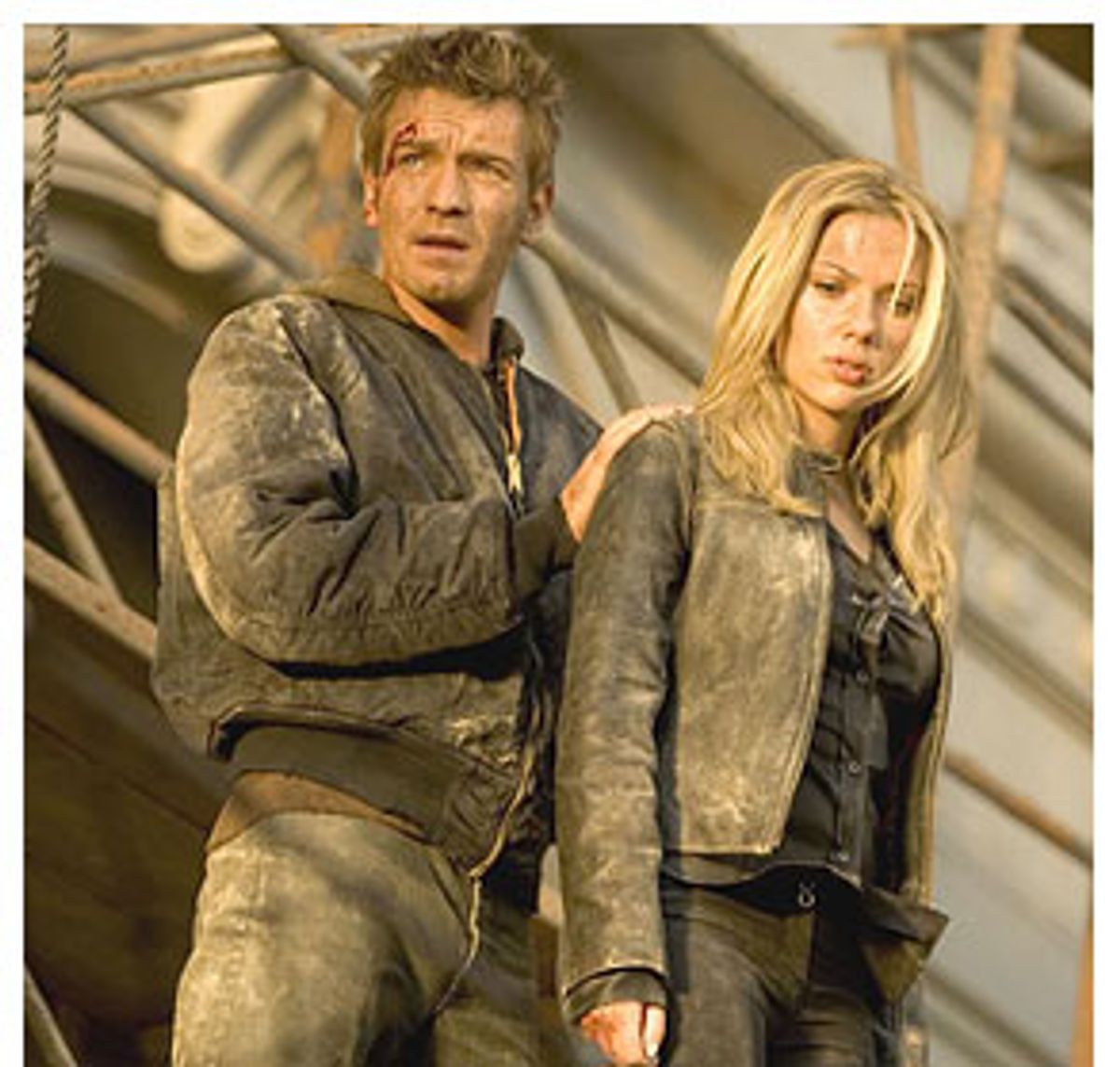 Early in the futuristic wangdoodle that goes by the name "The Island," an authority figure intones, "We have a product on the loose!" Unfortunately, so does Dreamworks. "The Island" is one of the strangest mainstream pictures of the year, although, sadly, not strange enough. It's a movie in which the actors all seem to be in on the joke every minute, but the director, Michael Bay, drifts in and out of it like an amnesia victim from a '40s melodrama. Is he making a social-issues parable, a "Candide"-like adventure about the corruption of innocents, a cautionary tale about the ethical limits of science, or an action vehicle in which his only real responsibility is to, as Billy Sol Hurok once said, blow stuff up real good? Bay can't remember what he's doing from one minute to the next, and when he loses the thread, he bulks up the movie with a pedestrian (if noisy) cat-and-mouse game that involves lots of crash-'em-ups and blammo fireworks, the realm he's most comfortable in.

Meanwhile, Ewan McGregor runs off with the movie on a very fast boat.

If you're confused, you've got nothing on me: I watched "The Island" with my jaw hanging like a squeaky "The Doctor Is IN" shingle. What the hell is this thing? It would be much easier to reckon with if it were wholly dismissible. But sometimes "The Island" works as high-toned sci-fi kitsch, and sometimes, even more inexplicably, it just works. In its silliest moments it has a sheen of preposterousness that's like a hard-candy coating. (You can't help but hoot when, early in the picture, two pregnant women clad in the white stretchy cycling outfits worn by all of these citizens of the future sidle up to one other, the better to stroke and admire each other's bumps. Has obstetric ominousness ever been writ so large?) "The Island" walks a weird, wobbly line between being stupid, falsely fattened-up entertainment and a picture that just might have possibly been made by a person with a brain -- a scrambled one, but a brain nonetheless.

So which is it? Damned if I know. The confusion begins as Ewan McGregor -- his character's name is Lincoln Six-Echo, which, much to your forehead-slapping chagrin, will make perfect sense to you by the end of the movie -- awakens in a gleaming white cube of a bedroom and has a pee. He has just had a nightmare involving a voluptuous blonde perched on the bow of speedboat that looks as if it were designed by Michael Graves: That would be Scarlett Johansson, and when she's not starring in Lincoln Six-Echo's nightmares, she's the magnificently groomed Jordan Two-Delta, another denizen of this nearly all-white futuristic Emerald City.

Lincoln Six-Echo and Jordan Two-Delta live in a completely enclosed facility that's like a cross between the inside of a toaster oven and an overlit Southern California mall. After arising from their bleachy-clean sleep chambers, they ride in gleaming glass elevators to the cafeteria, where a cranky worker bee slaps the appropriately nutritional breakfast grub into their compartmentalized trays. (Each dweller in this "contained facility" wears an electronic bracelet that determines whether he or she is entitled to bacon or slimy green goo at breakfast time.) By day, the inhabitants of this carefully controlled environment do menial jobs, like injecting nutrients into vast networks of multicolored plastic tubing. By night, they're entertained with virtual-reality amusements and drink fluorescent nonalcoholic cocktails in a spare nightclubby environment that bears a marked resemblance to a Damien Hirst installation. Those who live in this facility have been told, by a very smart doctor played by Sean Bean, that they're very lucky to be there. They've all been rescued from the outside world which, after some unnamed catastrophe, has become so contaminated that it's uninhabitable. But on the "inside," these foundlings receive very special care. And all have been told that eventually, they'll win the "lottery" and be transported to "the Island," the last spot on Earth free of pathogens.

You don't need to be Shirley Jackson to pick up on the creepy vibe in this joint. And you don't have to be a lab rat to smell one, but Lincoln Six-Echo does. In the first moment of "The Island" to tip us off that McGregor has the whole movie in his tight little pocket, he asks the smart doctor, with the earnestness of a 19th century English schoolboy, Why do we all wear these identical white outfits? Why is every Tuesday tofu night? Do people really like tofu? And just what is tofu, anyway?

You'll be asking these questions, and many more, if you leave the safety and comfort of your minimalist sleep chamber and go see "The Island." I can't tell you much more about it without giving all its secrets away, although you should know that there are worse movie punishments than watching McGregor and Johansson scamper around in clingy white Lycra, as they do for the first third of the movie. As in all her movies, Johansson comes off as refreshingly unaware of her own fresh-cream-and-earthenware beauty. (She has a remarkable moment here when she watches a version of herself in a Calvin Klein perfume commercial, and the look of wonder on her face -- "Who is that fantastic-looking creature who somewhat resembles me?" -- almost stops the movie cold.) And McGregor, at last free of that damn Obi Wan Kenobi cloak, can now return to roles that give free rein to his wicked sexiness and intelligence. When Lincoln Six-Echo and Jordan Two-Delta catch sight of a motorcycle whizzing by -- it's the first time they've ever seen one -- Jordan wonders aloud, "What was that?" Lincoln chases after it a bit, and then gazes after it wistfully as it drones into the distance: "I don't know -- but I want one!"

And yet whenever "The Island" starts to get really interesting, Bay thinks he needs to throw in a car crash or a round of gunfire to keep our attention. The script, by Caspian Tredwell-Owen and Alex Kurtzman and Roberto Orci, from a story by Tredwell-Owen, shows equal parts cleverness and patent absurdity, a potentially winning combination. And Djimon Hounsou, Steve Buscemi and Ethan Phillips (who plays one of Lincoln's pod-city pals, the touchingly quizzical Jones Three-Echo) all show up to give entertaining performances that keep the picture moving. (Hounsou's role seems incomprehensibly dumb at first, but this wonderful actor gets a bit more to do as the story plows forward.) Only Bay seems to be perpetually on the wrong page -- or, perhaps even more frustrating, sometimes he's on the right page, only to lose his way while his actors press on with remarkable surefootedness. Bay is too literal-minded, his idea of entertainment too "Crash! Bang! Boom!" to give himself over to the loopiness lurking beneath the surface of this movie. "The Island" is nothing so dull as a total failure. But it has enough surprises up its clingy white sleeve to make you wish it were better. The actors are having a blast while Bay is running around in the background, smashing stuff up and waving his arms, yelling, "Soylent Green is people!" Don't eat the tofu, whatever you do.