Even Diane Lane and John Cusack can't save this droopy romantic comedy about dating after divorce. 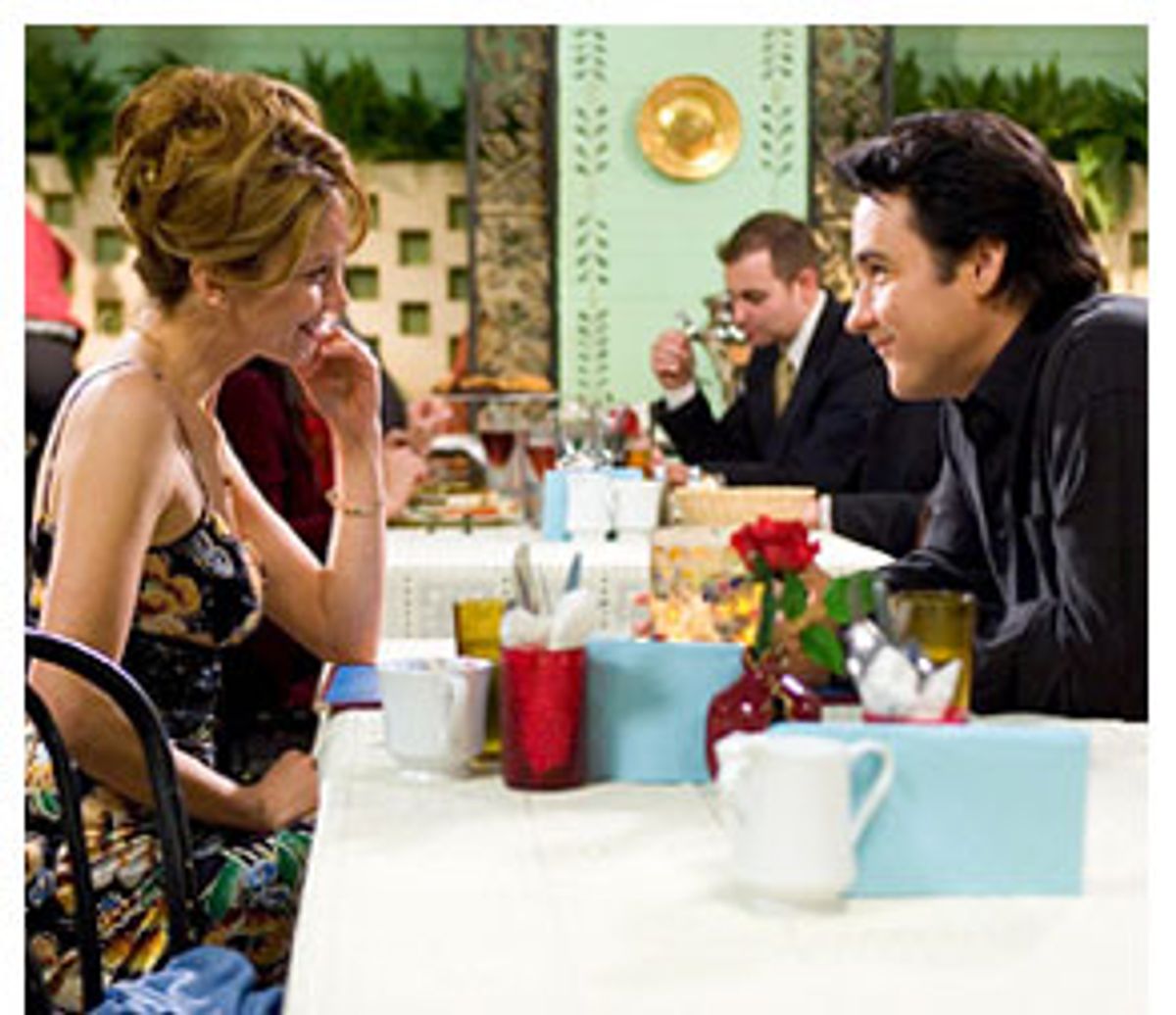 Nothing kills a romantic comedy faster than romanticism. When characters start making moony remarks about how each person can have only one true love in a lifetime, or launch into overheated speeches about how they long for "a love so real that even after you're dead, it hurts," it's time to head for the hills. That's not romance, it's pathology.

Maybe filmmakers think that moviegoers trolling for a fun date movie or an evening out with the girls are actually looking for this kind of poot. That's the only plausible explanation for why damp, droopy pictures like "Must Love Dogs" get made: This is a comedy about recently divorced people in their late 30s looking for love and companionship (a reasonable, realistic desire if there ever was one) that feels as if it was made by a teenage girl with a penchant for writing "Bobby Sherman 4-Ever" on her notebook covers. It's ostensibly about adults, but there's nothing remotely adult about it.

Diane Lane plays Sarah, a preschool teacher who has been divorced for eight whole months. Her large, nosy family -- which includes her happily married sisters, Elizabeth Perkins and Ali Hillis, and her widowed, ladies' man of a dad, Christopher Plummer -- can't bear to see her dying on the vine. (Eight months is 4-ever!) So, in a feat of product placement far more obvious even than the ubiquitous Coke can, these wily meddlers attempt to fix Sarah up with a suitable mate via Perfectmatch.com. (The characters say it just like that -- "Perfectmatch-dot-com!" -- as if they'd been expertly coached in radio-ad voice-over technique.)

In the movie's first 10 minutes, we're made to understand how badly Sarah needs a boyfriend: She has begun to spend way too much time at home in her comfy pajamas, and she snaps at her cheerful local butcher when he suggests she can get a whole chicken for just 75 cents more than the single breast she's requested. (In her newly single state, she's apparently forgotten how to use the freezer.) Cut to John Cusack's Jake, a builder of meticulously finished wooden sculls that nobody wants to buy -- and director Gary David Goldberg literally does cut to a shot of the sensitive, idealistic craftsman-artiste lovingly planing the surface of one of his boats. This is a guy with calluses on his hands and poetry in his soul, and he's recently been dumped by a wife he really loved. So he sits around watching "Dr. Zhivago" obsessively, boring his friends with his brooding, supposedly profound observations about the nature of true love.

Eventually, just as he's about to reach the pinnacle of unbearability, Jake answers an ad on Perfectmatch-dot-com, and it happens to be Sarah's. The two meet, but the bells go off for only one of them. There's a further complication in that Sarah has developed an interest in the father of one of her students (Dermot Mulroney), who has recently separated from his wife.

Of these two very different cuties, which will Sarah end up with? There's no question, but even so, the movie has to go out of its way to make Mulroney the bad guy. All of the actors here struggle valiantly to make the material feel fresh instead of canned. (The script was written by Goldberg, a TV veteran who worked as a writer on "The Bob Newhart Show" and was the producer of "Spin City"; he adapted it from Claire Cooke's novel.) Lane is almost always a vivid, glowing presence, but her performance here feels strained and tentative. Instead of riffing on the idea that conventionally beautiful women can be as lonely as anyone else, the movie turns Sarah into something of a sad sack, an insecure creature whose ambivalence about her love life is writ large in the sexy-mousy cardigans she wears. It's easy to see why Sarah would be nervous about re-entering the dating world, but Lane adopts a fluttery anxiety here that just doesn't suit her.

And while Cusack is a wonderful actor who usually knows just how to play intense, idealistic souls without overdoing them, his Jake is mostly a caricature. The movie doesn't take Jake's screwy romantic notions completely seriously, but it doesn't exactly play them up for laughs, either -- it wants us to find them cute and cuddly. And not even Cusack, with all his eyelash-fluttering charm, can pull that off. His timing is impeccable, which at least makes him entertaining to watch. But while both he and Lane do everything the movie asks of them, none of it seems to come from the gut. Even the movie's title ends up feeling misleading: A big, fluffy Newfie-looking canine does trot through the movie here and there, but she's really more of a prop than a presence.

At least "Must Love Dogs" gets an occasional jolt from its peripheral characters: Plummer has lovely moment in which he recites William Butler Yeats' "Brown Penny," and the movie momentarily opens up around him. And in a small, scene-stealing role, Jordana Spiro appears as Sherry, a perky 24-year-old with a champagne smile. Sherry's looking for nothing but fun, and Jake isn't looking for fun -- he's looking for serious. Still, he grudgingly goes out with this adorable cartoon cupcake, and even invites her out to see "Zhivago" on the big screen. She doesn't like the movie -- she wrinkles her nose and confides, in a giggly whisper, how boring she thinks it is. In the movie's universe, this is a terrible thing: This bimbo surely isn't good enough for smart, sensitive, boat-building Jake. But Sherry's got more life than anyone else in "Must Love Dogs," and more good sense, too: "Dr. Zhivago" is a snooze. And love that hurts even after death is overrated, too.