With Capitol Hill freshly vacated, Bush installed U.N.-hating John Bolton as ambassador to the U.N. If Democrats really were partisan hacks, they'd rejoice that the president chose this incompetent ideologue to sell his foreign policies. 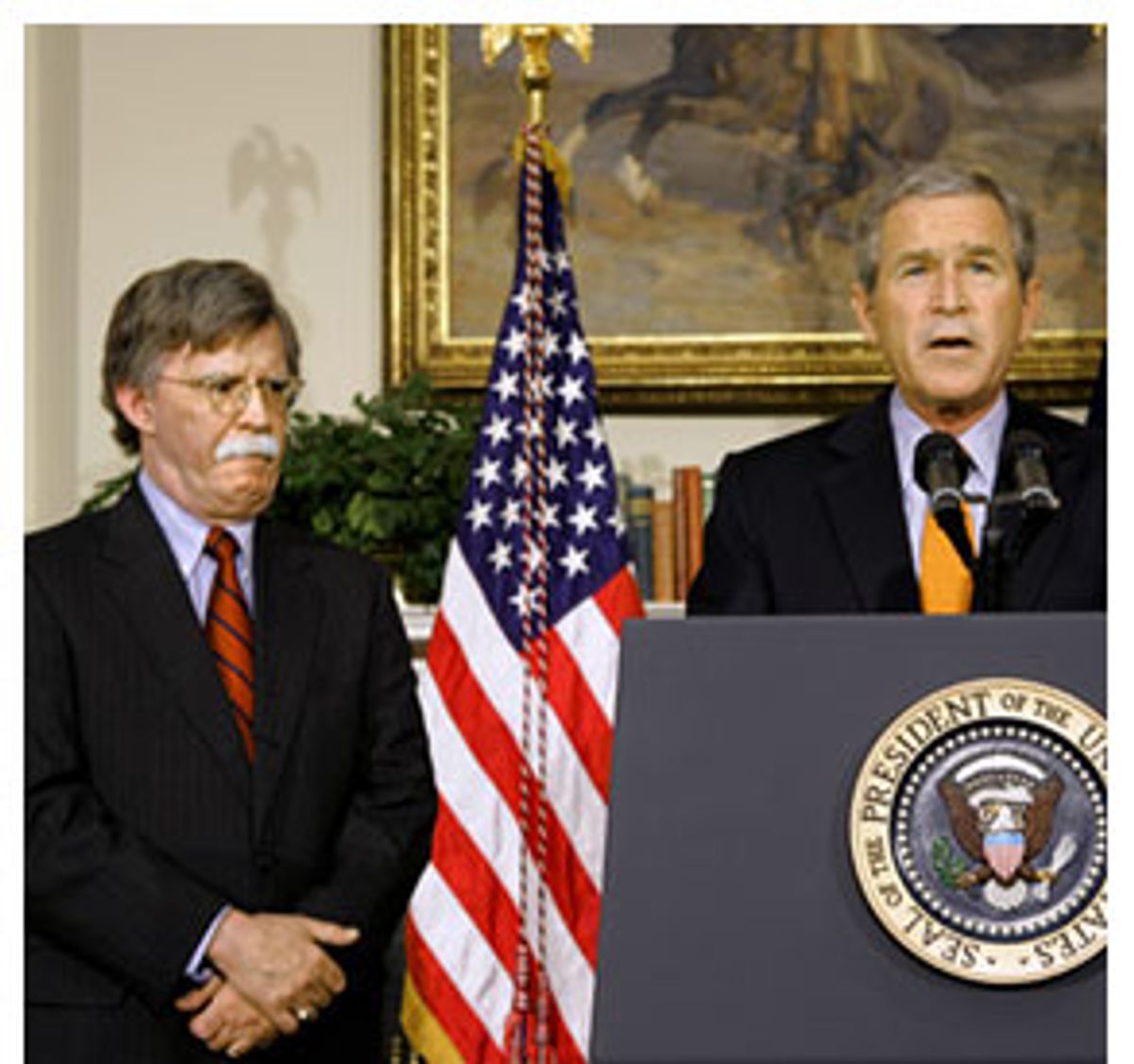 This week is the 60th anniversary of the Enola Gay dropping the bomb on Hiroshima, so perhaps it is entirely appropriate that George W. Bush has gone for the nuclear option and dropped John Bolton on the United Nations in New York. Bolton's diplomatic talents are such that he could start a shouting match in a Trappist monastery. He should make things at the U.N. go with a bang.

It almost counts as tact on the part of the White House that it waited until Monday to announce Bolton's recess appointment, instead of making the announcement on Friday as soon as the limos speeding senators to Ronald Reagan airport on their ways home had left the U.S. Capitol.

President Bush tried to justify the recess appointment by the urgent need to have a permanent representative in place at the United Nations for another 60th anniversary -- the summit to commemorate the founding of the international governing institution in 1945. U.N. Secretary-General Kofi Annan has tried to put forward a reform package that will guarantee a new lease on life for the organization. Bolton has repeatedly made it plain that he wants it pensioned off. His notorious pre-retirement package for the organization famously included knocking 10 floors off the U.N. headquarters building. His like-minded colleagues in Congress, like Henry Hyde and Norm Coleman, are already trying to bilk the U.N. of half the dues the United States owes. Out of loyalty to the White House, Bolton has not publicly supported the call, but he has hardly repudiated it either, since it is in line with his lifetime's prejudices. If there is an urgent need to reinvigorate the U.N., then the last person who is "needed" there is Bolton.

There has been loose talk about a Democratic filibuster of his appointment, but that is inaccurate. A filibuster in its strict sense is an attempt to hold off a decision procedurally. The Democrats in the Senate have been raising serious and substantial questions about Bolton's behavior and suitability for the job -- and it is in fact the administration that has been stalling, refusing to release information that, one can only assume, is damning for Bolton, for instance, about his rough ways with anyone who disagrees with his idiosyncratic views of the world.

There is credible evidence that he has commissioned intelligence reports on people in the State Department, and indeed he seems to have at least been in the vicinity of the Valerie Plame leak. In 2003, the State Department's inspector general questioned Bolton as part of an investigation into the Niger-uranium controversy that led to Plame's outing -- a fact that Bolton conveniently "forgot" when he came before the Senate Foreign Relations Committee earlier this year. If he treats "dissident" civil servants, and indeed his own party colleagues in the administration, as if they were foreign agents when they show insufficient enthusiasm for his obsessions, what does it say about how he will treat actual foreigners when they have the temerity to demur?

If the Democrats were really as partisan as Bush says, and put party affiliation above national interest, they should be overjoyed that as incompetent a diplomat as Bolton would be at the U.N., provoking even greater resistance to Bush's foreign policies by other nations.

For example, to work successfully on the U.N. Security Council, the U.S. envoy has to, at the very least, win over the other permanent members, let alone any new ones that may be added as a result of Annan's proposed reforms. Bolton is on record as thinking there should only be one permanent member with a veto: the United States. He has dismissed Europe -- which of course includes veto-holders Britain and France -- as having had a free lunch at Washington's expense. And China is unlikely to be impressed that his résumé includes a recent spell as a paid consultant for Taiwan. He may actually have been right about the issue -- there are good arguments for U.N. membership for the island nation -- but an American ambassador to the U.N. has to spend a lot of time persuading China not to veto resolutions. There may be people better qualified for the task, not least since Bolton, as he once said, does not "do carrots." Diplomacy is about horse-trading. All stick and no carrot leads to rapid stalemate.

Among Annan's core proposals, apart from the Security Council reform, are a new Human Rights Council with real teeth, an explicit definition of terrorism as violence against civilians and a definition of the "responsibility to protect," which would allow the Security Council to intervene in internal affairs to protect civilian populations. The latter should at least provide an occasion for harmony between Bolton and the Russians and Chinese. None of them is particularly enthusiastic about woolly liberal ideas like rescuing populations from genocide. Bolton disagreed with the neoconservatives and opposed U.S. intervention in the Balkans.

Although he is often lumped in with the neocons, he has none of their enthusiasm for spreading democracy or rescuing the victims of tyrants. He does share their commitment to the American right to take unilateral action, but is in fact a paleocon, an American exceptionalist. The only foreign country that he has shown serious signs of affection for, apart from Taiwan, is Israel, particularly in its robust militaristic and unilateral mode, with Likud in control.

Bolton's distaste for the U.N. has been ominously revealed by recent reports and allegations from insiders at the State Department. Under Democrats, U.N. ambassadors, such as Madeleine Albright, have been included in the Cabinet, while Republicans have traditionally downgraded the position. Even so, equipped as they were with large premises in New York, previous U.S. envoys to the U.N. have only had a small suite in the State Department. Bolton clearly has no intention of being downgraded and has been lobbying for much larger offices at State, since he intends to spend a lot more time in Washington than previous incumbents, away from all those foreigners, one presumes. The expanded State Department office, and the extra time Bolton spends in Washington, will not be spent representing the best interests of the United Nations to the administration.

To look on the bright side, Bolton may even drive a wedge between Bush and British Prime Minister Tony Blair, whose policy on issue after issue is diametrically opposed to Bolton's public pronouncements.

The appointment also does not bode well for Condoleezza Rice, whose fan club has been applauding her support for Bolton at the U.N. as a cunning move to get him out of the State Department, where he spent the last four years frustrating Colin Powell's efforts to keep the United States on speaking terms with the rest of the world. The U.N. ambassador is unique among American envoys in that he or she has a high profile domestically, appearing on television every time there is a world crisis. That has caused friction in the past between career diplomats and secretaries of state. On past form, Bolton's big mouth and small-mindedness are guaranteed to undermine any leanings Rice may have toward maintaining normal diplomatic relations with the rest of the world, including the recent attempt to repackage the "global war on terror" -- which so many other countries found indigestible because of its misapplication in the invasion of Iraq -- as the "struggle against violent extremism."

For that rebranding to have credibility, maybe the United States should offer a pact to outlaw chimerical weapons: the entirely spurious weapons threats that Bolton has specialized in reporting in any country that his alma maters, the conservative think tanks Heritage Foundation and American Enterprise Institute, dislike.

For most of the diplomatic corps and the world's ambassadors, Bush's message to the U.N. with the Bolton appointment is the same as the famous headline from President Ford to New York: "Drop dead." Despite their privately expressed shock, it is unlikely that many of the other U.N. ambassadors, let alone the senior U.N. staff, will have the temerity to speak out in public. But in private discussions, they may well relish challenging Bolton's credentials to speak on behalf of a nation whose legislature has failed to endorse him.