Caught up in the Current

Al Gore's TV network serves up compelling topics at a brisk pace -- there's just not enough to go around. 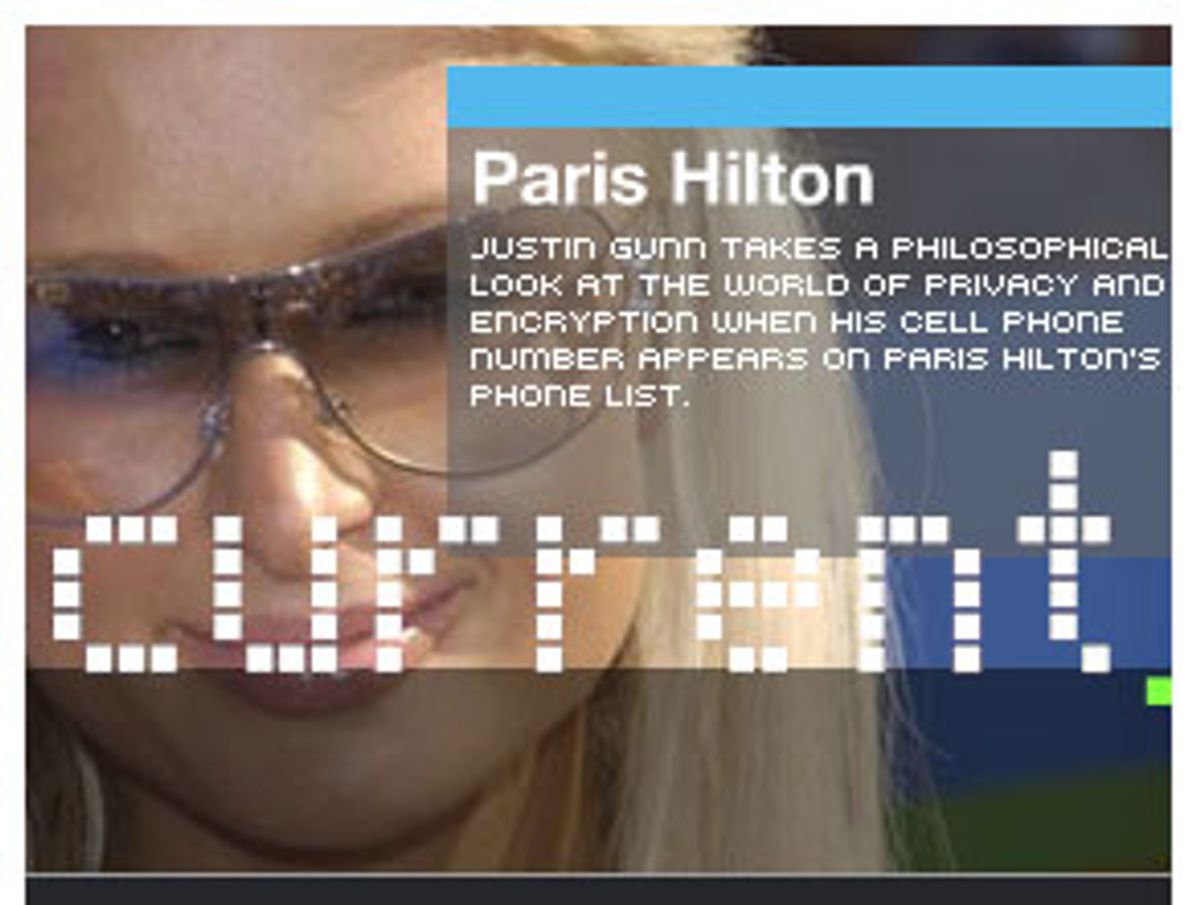 "I would say the best way to begin a spiritual journey is to sit quietly, close your eyes, do nothing for a while and then start asking yourself questions." Deepak Chopra is speaking directly to the camera, looking earnest yet somewhat detached. "And then, situations, circumstances, events, people, relationships will all somehow conspire to give you the answers ... but you have to ask the questions."

I'm five minutes into my first exposure to Current TV, the new channel founded by Al Gore, and I already want to turn it off -- not because the programming is bad but because this seems like the best time to begin my spiritual journey. How will I ever get the answers if I don't ask the questions? Plus, that part about sitting quietly and doing nothing sounds very appealing.

Before I can find the remote, though, Van Jones, an activist who works for the Ella Baker Center for Human Rights, is talking about youth prison reform in a very deep, hypnotic voice. "When I went to Yale for law school ... I saw drug abuse. I saw it on the campus and in the housing projects near the campus," Jones murmurs, as we're treated to a close-up shot of what looks like Bayer aspirin and some hand-rolled cigarettes. "The kids on campus got to go to rehab and the kids in the community went to prison. We know how to turn kids' lives around, and we do it for rich people's kids. Let's do it for poor people's kids."

Jones reminded me of the college kid I knew who got pulled over for doing 90 on the freeway with an eight ball of cocaine in his glove compartment, but only ended up with some probation and a little community service, thanks to his dad's high-priced lawyer. But there's no time to reminisce -- this "Current Caring" piece has given way to a "Current Core" segment about Shepard Fairey, the street artist responsible for those ubiquitous Andre the Giant posters that say "Obey" on them. Fairey says he no longer needs the exposure that pasting his graphics onto billboards provides, but the experience is important to his concept of thriving as an artist. Driving his car through the streets of Los Angeles, he tells us, "You can succeed without being completely absorbed and corrupted by the system."

Gore and his partners may be trying to prove just that with their new Current TV. The programming is broken down into short segments, or "pods," generally less than 10 minutes long, which focus on everything from style to newlywed experiences to money management to profiles of inspiring individuals. As each pod progresses, an indicator (like the one you see in QuickTime or iTunes) demonstrates how much time is left in the segment. If you've never seen your TV imitate your laptop before, that's just the beginning: The network hopes to receive a lot of its content from viewers, who are encouraged to shoot short pieces on video and upload them to the Current TV Web site. Viewers will vote on the best segments, and first-time contributors will make $250, while regular contributors will make around $1,000 per pod.

At the press conference for his new cable network, Gore explained in earnest yet detached terms just how revolutionary he intends his venture to be: "I personally believe that when this medium is connected to the grass-roots storytellers that are out there, it will have an impact on the kinds of things that are discussed and the way they are discussed."

As plenty of observers have pointed out in the run-up to Current TV's launch, Gore's vision is more than a little bit idealistic. The economics of running a cable network are absolutely merciless, a fact that goes pretty far in explaining why Gore and his cofounders may talk a big show about "democratizing television" and providing a voice for a wide range of participants but are reportedly less than enthusiastic about content that's overtly political or radical.

Given the countless limitations and pressures of the TV market, it's not hard to see why. In fact, forget politics or revolution; merely creating content that's inspiring is a risk. After all, if your programming points to a world of possibilities far from the small screen, it actually encourages viewers to turn off the TV and get a life. That's why most networks carefully sidestep more nutritious offerings in favor of empty, addictive fare -- elimination-based reality shows, dramas with a central mystery that unfolds over the course of the season, cop shows with soap opera twists and cliffhangers.

So the folks at Current TV are working within the system -- which, I guess, explains why everyone on the network is so damned good-looking. From the gratingly hip young hosts to the young female preacher in Texas in her bright-red lipstick and cowboy boots to the "Current Hottie" -- a pod that profiles a revolving lineup of supermodels -- every face we see on Current is beautiful. Even Jones, the human rights activist, has the face and body of a Polo model. After a few hours of this steady flow of pretty faces, it's easy to feel as if you're watching the extended version of that Coke commercial where young people drive around the country with their video cameras, proving that "kids today aren't just slackers, yo!" No, kids today make art and spin records and skateboard and play guitar, and best of all, they're all really adorable! Yes, we'd all like to teach the world to chill, if the world were this sexy.

Unfortunately, the Current hosts are too sexy for their cable network. And not only do they introduce each segment with inane, bubbly comments that make it sound far more fluffy and empty than it is, but they reappear after each segment to sum up their feelings about what happened. This is why we know that watching a pod about dating in Iran makes former Miss USA Shauntay Hinton realize "how lucky I am to be free to do what the hell I wanna do! Yeah!" and watching a segment on suicide in Japan "pretty much took the wind right out of my [host Johnny Bell's] sail." Bell adds, "Not much more to say, but it's tragic." As a result, tuning in to Current TV sometimes feels like going to see a moving documentary with a semiliterate preteen who insists on recasting the entire story in the shallowest of terms the second the credits start to roll.

Does all this fluffy packaging make sense? While it's certain that the network thought it was hiring an unusual, eclectic, diverse range of young people as hosts, this group is actually far less interesting than early MTV VJs. And if every pod features a bunch of pretty people, how does that encourage those grass-roots storytellers out there, many of whom don't have glowing skin and teeth as white as their kitchen sinks?

That said, compared with the same-old, same-old of most news shows, Current TV's content feels fresh, succinct and engrossing. Over the course of a few hours, I watched segments on home buying in Brooklyn, N.Y., jumpers (people who jump off cliffs and bridges with parachutes on their backs), modern kit houses, money trouble among newlyweds, college-age egg donors, the prevalence of suicide in Japan, the anxieties of expectant parents and the perils of dating in Iran, and my interest didn't wane. The segments were concise and dynamic, each one introduced me very directly to some new experience or perspective, and I could easily see how much time was left if I did get a little impatient with one particular pod.

In fact, I was pretty impressed by Current TV in spite of the jabber of the hosts ... and then, two hours into my viewing, the segments started to repeat themselves. In the course of four hours, I ran into the spot with Chopra twice, the egg donor spot twice and the Texas preacher spot three times. The next day (Tuesday), I turned on the TV to hear Chopra tell me, for the third time, that the universe is "actually a field of possibilities that is compelled to answer questions, that is compelled to make choices based on questions that you ask."

One hopes that when Al Gore asks how Current TV can retain viewers if it keeps repeating the same content over and over again, the universe will have an answer.