In "Where Mountains Are Nameless," fearless adventurer Jonathan Waterman makes a passionate, personal case for preserving the Arctic Wildlife Refuge -- and the polar bears and caribous that call it home. 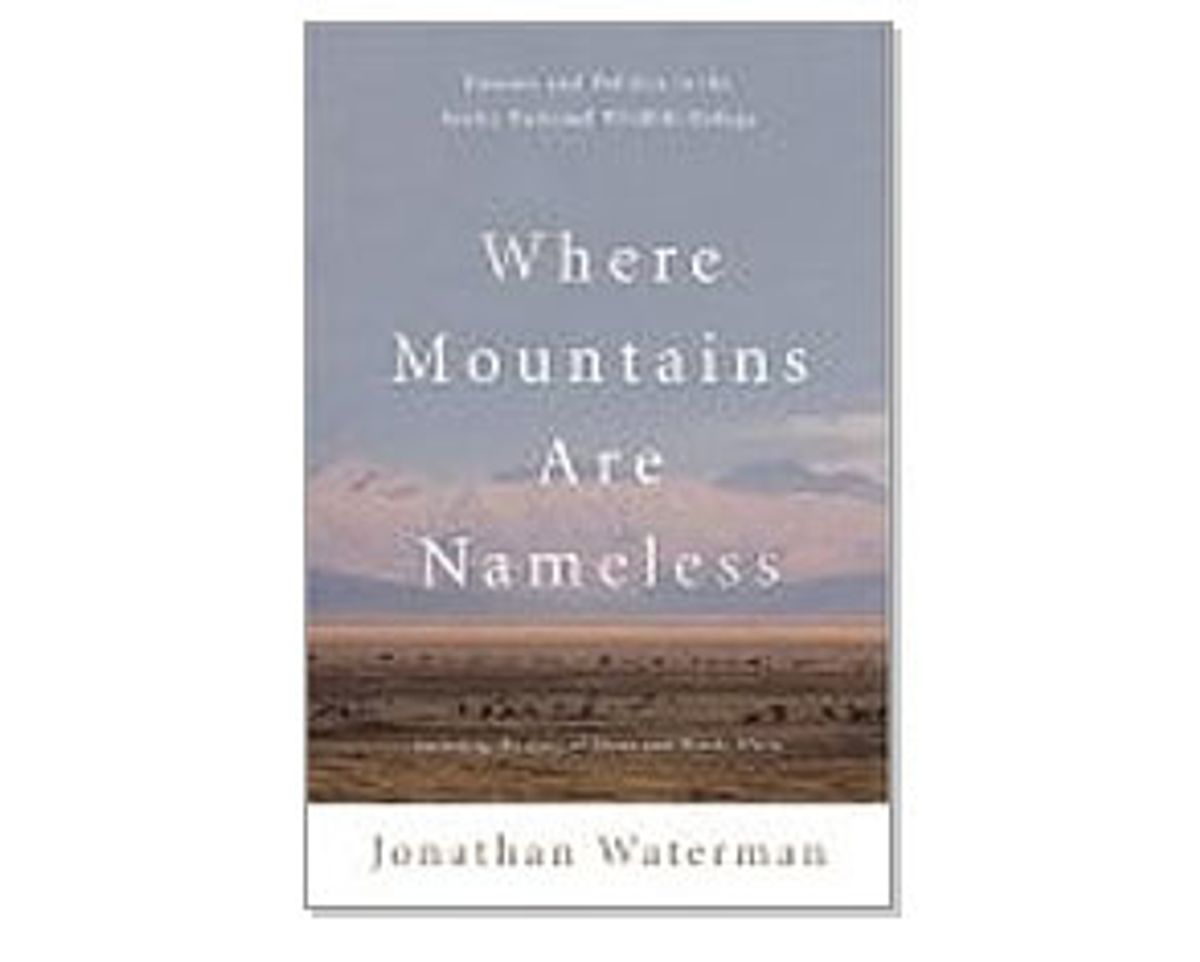 Jonathan Waterman has been stalked by a polar bear that was so hungry it ate his feces. He has swum in icy waters to catch his runaway kayak, only to later singe off most of his body hair warming up by a fire to try to avoid hypothermia. And he has stumbled upon the half-eaten carcass of a caribou stored by an engorged grizzly for future feasting, risking coming between the bear and its next meal.

But none of these is the scariest of Waterman's encounters in "Where Mountains Are Nameless," an impressionistic account of his 18 excursions to the Arctic over 20 years. That honor goes to his conversation with the enthusiastic driver of a Princess Tour bus whom he met while visiting the oil industry town of Deadhorse, Alaska: "Twenty-five years ago this was all a wasteland. Now look at it: It's a modern industrial complex!" the driver exclaimed enthusiastically.

One man's progress is another man's "industrial perdition," as Waterman dubs the area near the Arctic National Wildlife Refuge that has already been drilled. And that same perdition -- or progress -- may represent the refuge's future, since right now it's close to being opened to oil exploration. Waterman's latest book -- he has written eight other adventure tales -- is a bid to defend the Arctic refuge by weaving stories from his own travels there with those of the couple who protected it in the first place: Olaus and Mardy Murie.

It's clear from book's beginning that Waterman is firmly on the side of the caribous, musk oxen, polar bears and now-deceased Muries, not the guy driving the tour bus in Deadhorse. And despite what some bar graphs lurking in the book's appendix might lead you to think, this is not really an argument about how little recoverable oil is likely to be percolating under the tundra. Waterman makes his case for preservation by sharing his experiences of a remote and unforgiving landscape, and as such, it delivers.

Each time Waterman visits the far North, he sustains hundreds of mosquito bites before redeveloping a natural antibody to them and the bites finally stop itching. But to Waterman, this periodic bloodletting, and the other physical and emotional hardships of traveling in real wilderness, often alone, are more than a personal trial by fire; they mean that there are fewer other travelers and he'll be able to see more. The wildlife doesn't disappoint. He spies five mewing wolf pups -- "cinnamon-colored fur balls atop uncertain legs" -- outside their den; sees eight musk oxen, which "resembled loose, waist-high piles of hay," circling protectively around a grazing calf; and catches a fox in the act of rummaging through his kayak cockpit while he's trying to sleep nearby.

And that's not even to mention all his beguilingly close encounters with animals he's actually afraid could kill him. Apparently, one of the worst things about surviving a grizzly bear mauling is possible infection from the bear's bite. "The lack of grizzly hygiene, augmented by their taste for carrion and their frequent gorging on flesh wriggling with an assortment of pathogens, causes septic wounds in humans who have been bitten," Waterman explains. Far from any hospital, he carries antibiotics, hydrogen peroxide and morphine with him, just in case.

Then there are the Muries' Arctic adventures. It turns out that the land now encompassed by the Arctic National Wildlife Refuge was actually threatened by development much earlier in its history -- not for its oil but for its caribous. The U.S. Biological Survey in Washington -- since absorbed into the U.S. Fish and Wildlife Service -- had the bright idea of introducing domesticated reindeer into the herds of wild caribou in hopes of taming the lot of them. And Olaus Murie, a biologist originally from Minnesota who had studied Arctic birds, was charged with going there to figure out how to best get the job done. But his fieldwork took him in a different direction.

"In 1920, during his first fall studying the caribou, Murie ran behind the herd like a hungry wolf through the boreal forest," Waterman writes. Conditions were austere, to say the least. Olaus Murie would sleep between his sled "dogs to stay warm and to stop them from tearing each other apart with hunger." And once, he subsisted for a whole week on only a moose heart. In the process, he personally counted half a million caribous, and drew conclusions about their biology and behavior that still hold water today.

At that time, large predators were officially considered menaces that had to be eliminated so that they wouldn't threaten the game species that humans hunt, like elk, sheep and caribous. You can still hear echoes of this sentiment from some elk hunters in the lower 48 states who accuse the wolves reintroduced 10 years ago to Yellowstone of decimating local elk populations. But Olaus Murie discovered that predators such as wolves actually strengthened the caribou herd overall by culling the old and the sick and the weak.

What began as a mission to figure out how to best exploit a so-called natural resource ended up stopping government plans to domesticate the wild caribou herds. Olaus Murie "advocated that the herds be left alone with the wolves and bears, and that all species be given large and uninhabited tracts of habitat," Waterman writes. "Although these conclusions would become more widely accepted a half-century later, in 1926 Murie's science shocked and stunned government bureaucrats, who appreciated wildlife only for its potential economic value."

In the ensuing years, Murie and his wife, Mardy, became the biggest advocates for the protection of their beloved tundra. Olaus' experience in the backcountry gave him credentials enough to make the case to local Alaskans, and lent a scientific basis to his advocacy that even bureaucrats in Washington couldn't deny. Mardy's indefatigable letter writing, inspired by her trips to the Arctic with Olaus, including their honeymoon, helped to make the Arctic National Wildlife Refuge a reality in 1960, just three years before Olaus' death. Margaret "Mardy" Murie would live on for more than 40 years; in that time she became a kind of conservationist hero and grandmother to the movement to preserve wilderness.

The University of Alaska's first female graduate in 1924, Mardy grew up in Fairbanks, Alaska, and lived to be 101. Until the end of her life in 2003, Mardy didn't use a computer, TV, dishwasher or answering machine. And forget cellphones -- her telephone was a rotary-dial model. Late in life, she was sanctified by many admirers, who would make pilgrimages to her mountain home in Grand Teton National Park to seek guidance from the matriarch. But Mardy refused to just hand out pearls of wisdom like some avuncular seer. One instructor at the Teton Science School came to her asking how he could be a better teacher. She asked him a few questions, including if he spelled the word "pine marten" correctly, and concluded: "I think that you're doing your fair share -- you're doing great."

At a memorial celebration for Mardy Murie, a high-ranking government official remarked in conversation: "They'll never drill the Arctic refuge. It just won't happen." And that's the last line of Waterman's book. Will that sentiment prove to be overly optimistic to those who dread the creation of another industrial perdition? That's beyond the scope of "Where Mountains Are Nameless." But with the future of the refuge now hanging in the balance, Mardy's acolytes may soon be thankful that she didn't live to see 2005.