The man also known as Andre 3000 plays the brother of the former Marky Mark, and it's an action-packed family affair. 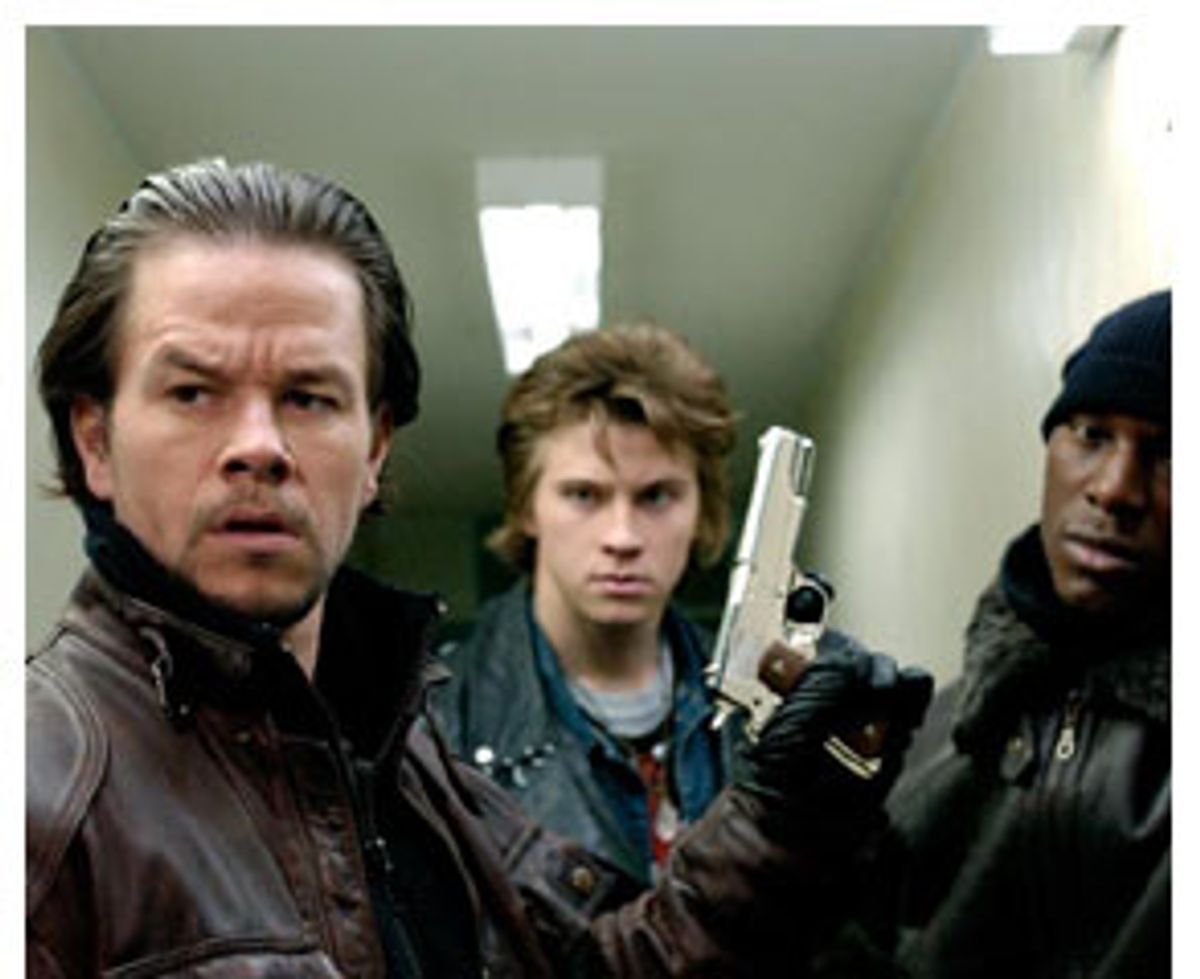 There are tighter, tonier pictures than John Singleton's "Four Brothers" around right now but few that are as gripping: Even when it wobbles off-track, it has some juice to it.

Mark Wahlberg, Tyrese Gibson, André Benjamin and Garrett Hedlund play Detroit brothers -- their names are Bobby, Angel, Jeremiah and Jack -- brought together from their disparate universes by the death of their adoptive mother, Evelyn Mercer (Fionnula Flanagan). Evelyn had been a foster-care worker who took the toughest cases -- the kids no one else would adopt -- into her own home. She raised these four boys as brothers, a fact that's so self-evident to them that they're almost shocked when outsiders remark that, because of their different skin tones, they can't possibly be related. Evelyn has been killed in a grocery-store shootout, and the brothers, at first frozen in their grief, begin to wonder who might have committed the crime. And from there, they become obsessed with avenging it.

Singleton tends to be as interested in characters as he is in action, but "Four Brothers" brings those inclinations into even sharper relief. The movie is at its dullest when the characters are busying themselves with the supposedly exciting stuff, like shooting at one another. But Singleton wants us to know something about these four guys, and to care for them, before the bullets start flying. Jack (Hedlund), the youngest, is the emotionally guarded rock 'n' roller, the one the others tease mercilessly, although they also feel desperately protective of him. Angel (Gibson) is a former hustler who joined the Marines, a tough guy with a secretly tender soul. (At one point in the movie, when he believes someone close to him has betrayed him, he wears the expression of a man who thinks he's seen everything, only to realize that there are an infinite number of ways for life to crush him.) Jeremiah (Benjamin) is the family man who's worked hard to make a good living for himself and his family. Bobby (Wahlberg) is the headstrong one, a loose cannon whose patter is a nonstop stream of amusingly crude figures of speech (at one point he accuses the local cops of being incapable of finding "tits in a strip joint") and not-so-amusing homophobic banter.

Although all the Mercer brothers are notorious among the local police force for being troublemakers -- their youthful reputations have died hard -- Bobby is the one with the worst criminal record, and the one who's likeliest to get into the deepest trouble. When Terrence Howard's Lt. Green -- a local kid who grew up with the boys and rose through the ranks of the police force -- asks him if he's keeping straight, he responds, nonchalantly, "Straight-ish."

Singleton and his screenwriters, David Elliot and Paul Lovett, take their time laying out the relationships between the brothers, gradually filling them in with pointillist dots instead of spelling them out for us with heavy planks of dialogue. The four spend a lot of time picking on one another, and while skin color is never a stumbling block for them, it's also fair game for jokes. (Jack, who hasn't seen Angel in years, takes in his dazzling smile and mischievously asks him if he's had his teeth whitened.) Singleton knows you can't erase color lines, but he's not interested in needlessly reinforcing them, either. The Mercer brothers' sport of choice is hockey, not basketball. And the music on the soundtrack isn't, for the most part, contemporary hip-hop, but '70s soul, all of it Motown -- although it's the tougher variety of Motown, like Marvin Gaye's "Trouble Man," the Temptations' "Papa Was a Rolling Stone" and the Undisputed Truth's "Smiling Faces Sometimes." This is music that, just like hip-hop, was marketed heavily to white kids, although not even the squarest of them could be blamed for falling hard for it. At one point the brothers sit idly in their mother's living room, missing her, spinning old singles on the turntable. (And flinging those old plastic 45 adapters at each other like ninja stars.) The suggestion is that pop music was a connecting point for them as they were growing up, not just because they were living in the home of Motown, but because music has the power to smudge (if not erase) boundaries like no other medium.

Singleton has good instincts for melodrama, and he's so deft at the quiet parts of "Four Brothers" that by the time the action kicks in, you almost wish it wouldn't. There's a stunning chase sequence through some not exactly scenic urban streets in the middle of an early snowstorm (the picture takes place right after Thanksgiving). The cars can only attempt to speed down those streets -- they swerve and fishtail on the ice as they try to get a purchase, which is part of what makes the chase so exciting. But the snow also gives these cars a soft-focus glow, making it look as if they're moving in slow motion. It's a chase scene that borders on the hypnotic.

Something happens at the end of that sequence that should jolt the rest of the movie into another emotional hemisphere, but Singleton doesn't run with the opportunity. In some ways, he doesn't seem to realize how vital a character-driven picture he's begun to make; and by its last third the movie, even within its enjoyable confines of conventionality, has become even more conventional than it needs to be. Still, it holds us, with the help of the performers. Wahlberg, a sensational actor who never seems to get his due, pushes this limiting role as far as he can: He makes us wish it were written more expansively, but even so, he manages to sneak in some shadowy, subtle tones. Howard and Taraji P. Henson (both most recently seen in Craig Brewer's remarkable "Hustle & Flow," which Singleton produced) and Chiwetel Eijofor have smaller roles than they deserve, but they work to make the best of them.

The real star of the picture is Benjamin. Benjamin -- who is also, of course, André 3000 of OutKast -- is a natural for the big screen, and not just because he's outrageously handsome. Benjamin is relatively new to acting, and although the performance shows a few seams here and there, you can almost see him learning the finer points of the craft minute by minute. The movie is smart enough to realize that his charisma is so powerful it practically amounts to leadership quality -- at one point a character makes a reference to Jeremiah's strong track record as a union leader, and you have no trouble believing it. Benjamin also happens to be the only man on the planet who can make overalls look debonair. Union activism is all well and good, but it's those coveralls that seal the deal. Now that's star quality.