Bush's inability to feel the pain of others -- highlighted by Cindy Sheehan's peace vigil -- is a stark contrast to the anguish LBJ felt over casualties in Vietnam. 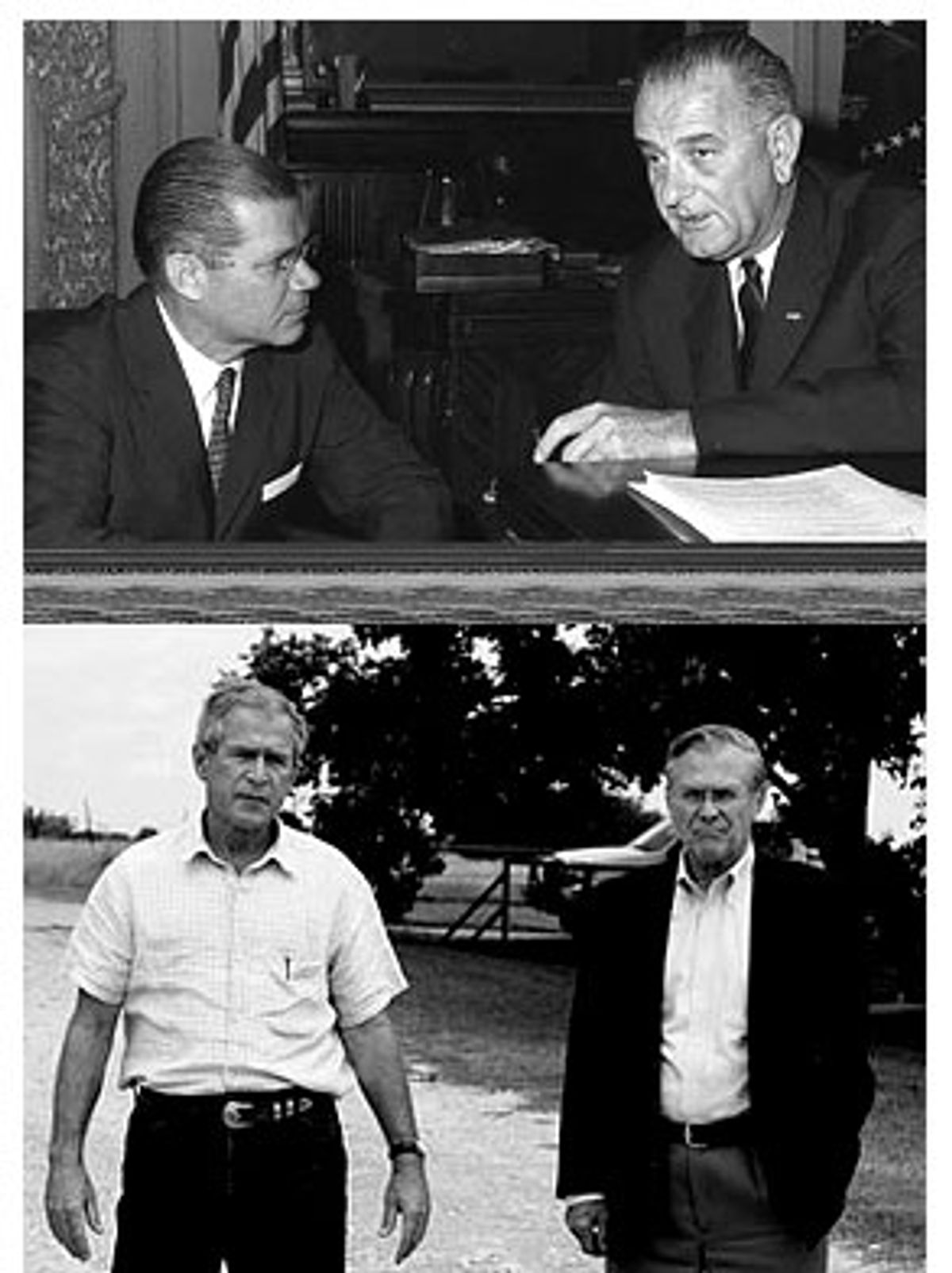 As the Iraq war becomes ever more futile, the similarities -- and more important, the differences -- between George W. Bush and Lyndon B. Johnson become more pronounced.

Both Texans will be tarred by history for having waged disastrous, unwinnable wars. Both holed up at their Texas ranches whenever they wanted out of Washington. Both were surrounded by a coterie of hawks who believed that America's techno-military machine could prevail over any enemy. Johnson had Robert McNamara as defense secretary. Bush has McNamara's body double: Donald Rumsfeld, a man whose demeanor, defiance and even eyeglasses are the spitting images of his Pentagon predecessor from 37 years ago.

There are other similarities between Bush and Johnson: their personal charm, their predilection for cowboy hats, their ability to dial up their "Texan-ness" whenever the moment required. They are even twins in the polls: A recent Newsweek poll shows that just 34 percent of Americans approve of Bush's handling of the Iraq war -- a number that is almost identical to the 32 percent who approved of LBJ's handling of Vietnam back in early 1968.

But these similarities are as nothing when comparing the two men on a more intangible quality: the ability to feel the pain of others. And it has taken a woman like Cindy Sheehan to reveal this stark difference. Sheehan is the antiwar mother of a soldier, Casey Sheehan, who was killed in Iraq last year. She has set up a camp outside Bush's ranch in Crawford, Texas, in the hope that Bush will meet with her to discuss the war. Bush has refused. On Saturday he told reporters that while "it's important for me to be thoughtful and sensitive" to people like Sheehan, it is also "important for me to go on with my life."

Bush is the detached CEO, a man who got his position thanks to a lifetime of privilege; Johnson was a hands-on CEO who got the job after having worked his way up from the very bottom of the political world. Bush doesn't do details; Johnson pored over the aerial maps of Vietnam, hoping that he could pick a bombing target that would turn the tide of the war.

Bush doesn't go to funerals for our dead soldiers. Until last week, his administration had refused to release photos of the flag-draped caskets coming back to the United States. (The Pentagon caved as a result of a Freedom of Information Act suit.) When it comes to the second Iraq war, Bush displays no doubt, no anguish. And therein lies the key: It is that quality that made Johnson, for all his faults and failings, a great president. It's the same quality that exposes Bush as the wrong president at the wrong time, fighting the wrong war in the wrong place.

Johnson felt the ruin that came with the deaths of American soldiers in Vietnam. And he was devastated by it. In early 1968, according to Nick Kotz's magnificent book, "Judgment Days: Lyndon Baines Johnson, Martin Luther King Jr., and the Laws That Changed America," the war in Vietnam was going from bad to worse. "Since the Tet offensive had begun the previous month, five hundred American soldiers were dying every week. Often, late at night, the president would go down to the White House Situation Room to check on casualty reports. At times, when Johnson sat with visitors in the Oval Office, he would weep openly as he read from the previous day's casualty lists."

Johnson felt the pain of others. And his courage and determination (along with the sharp prodding that came from Martin Luther King Jr.) to help the less fortunate forced Congress to pass the Voting Rights Act and Civil Rights Act. In doing so, Johnson achieved one of the great political -- and human rights -- victories of the last century.

W. doesn't do human rights. He doesn't do casualty lists. Nor, apparently, does he cry. And as noted by author James Moore, that's what makes Sheehan such a powerful figure. Sheehan has rendered the complexities and carnage of the war into a simple question: Are you on the side of a grieving mother of a dead soldier? Or are you on the side of a president who continues to insist that this war is, in some way, noble?

Just as American troops are losing the war in Iraq, so is the Bush administration losing the war of public opinion here at home. But even as he is losing both wars, Bush continues to insist in his anguish-free manner that we are doing the right thing in Mesopotamia. And that certitude comes, he believes, from on high. In July 2003, during a meeting with Palestinian Prime Minister Mahmoud Abbas, Bush told the newly elected leader of the Palestinians that "God told me to strike at al Qaeda and I struck them, and then he instructed me to strike at Saddam, which I did."

LBJ, and other presidents who served during the Cold War, had a hot line to the Kremlin. Bush apparently has a hot line to God -- a connection that allows him to deny the questions raised by impertinent interlopers like Sheehan.

Bush's religiosity is the key element here. He has a total belief in the rightness of his position. But there again comes a key difference with LBJ. Like the born-again Bush, Johnson was a man of faith. But he was a man of many faiths, often attending two churches -- one Roman Catholic and one Protestant -- on a given Sunday. Raised a Baptist, he became an elder at the Disciples of Christ Church near his home in Johnson City. Johnson's intellectual curiosity led him to see that one religion, one worldview, didn't hold all the answers. As Johnson's biographer, Ronnie Dugger, put it, LBJ was "an ecumenical movement all by himself."

Bush's blind faith in his own path -- religious and military -- leaves no room for ecumenism, or doubt. And that lack of doubt, that lack of anguish over the lives being lost in Iraq, is emerging as his fatal flaw. Cindy Sheehan has placed that flaw into the spotlight for all to see.