Reading "Lord of the Flies"

Almost 20 years ago, I wrote a paper on William Golding's survival tale -- without reading the book. This summer, I thought I'd see if it was truly as dreadful as I imagined. 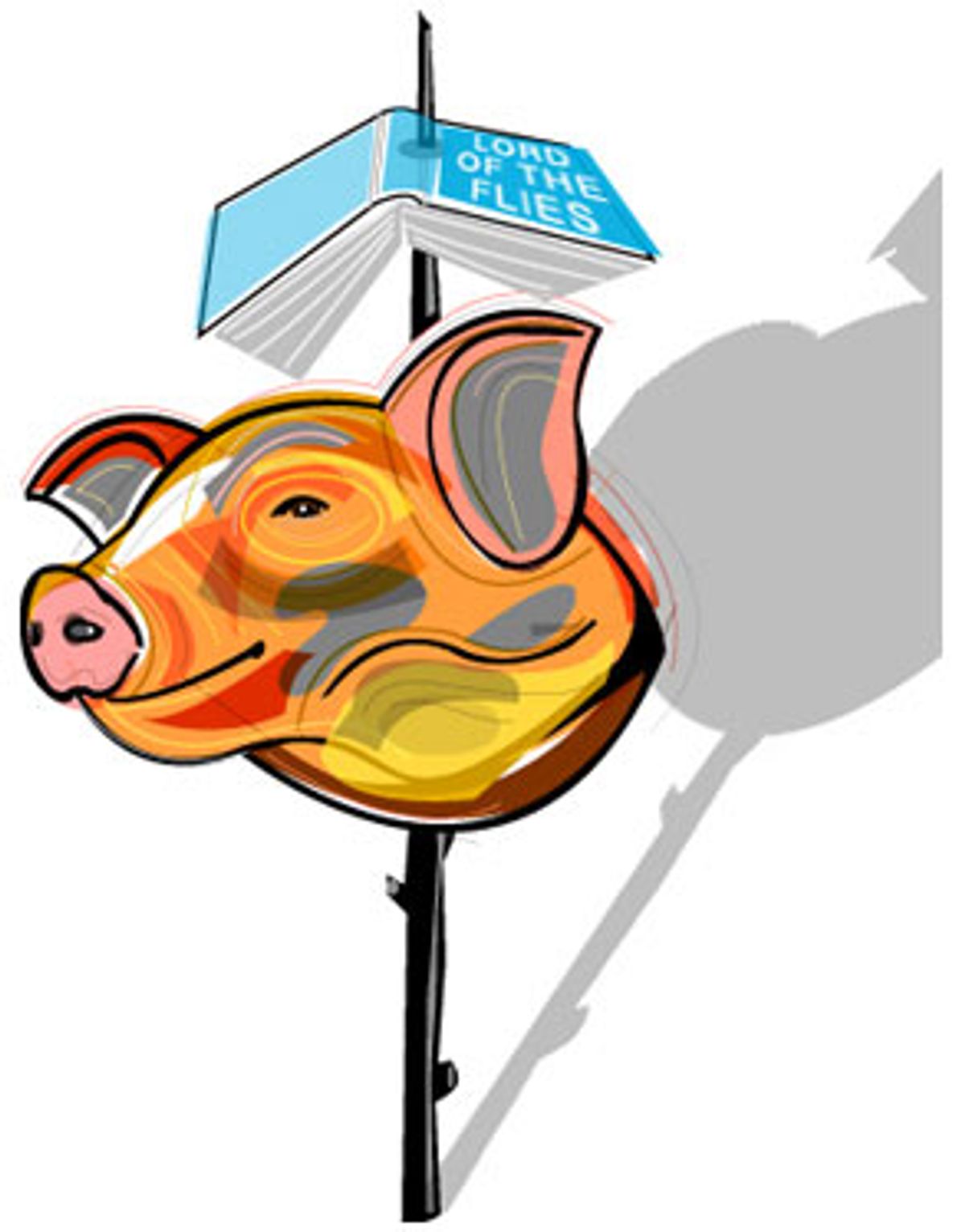 How did I get here, in Summer School, a knot of assignment angst tightening my stomach in the midst of my 31st year?

It begins with an undone piece of homework from 17 years ago. Back in 8th grade English, under the watchful eye of Laura Sharpless, I willfully failed to read William Golding's "Lord of the Flies." I did start it, with the best of intentions. But it lost me, soon after I realized there was a character named Piggy. According to the copy I have sitting in front of me, which happens to be the same edition that I chucked in a corner almost two decades ago, that's on Page 11.

Up until the "LOTF" incident (I think of it as "LOTF" because that's how Laura -- Quaker school, teachers went by first names -- used to write it on the board when assigning pages that I had no intention of reading) I had been a diligent student. But this was the (text-appropriate) moment at which I broke free of the dictates of academic structure and behaved badly, the instant when I realized that I could pass tests and even write papers without reading the book. It was an exercise that would be repeated occasionally in high school and college, but "LOTF" was my maiden backsliding voyage.

I was not without my reasons. See, even without having read the book, I managed to glean -- from the class discussion I tuned in for and thanks to the helpful cover illustration of a little boy all done up like a savage -- that Golding's novel was not one of the subtler texts in the Western canon. I got the point: Young men left to their own devices will go wild, massacring pigs and eventually each other; human nature, outside of controlled conditions, is a destructive and untamed force. Yawn.

I know how it sounds, especially with my being a female writer, one who often writes about women. It sounds like I don't like "boys books." But I do! Some of my favorite books are about boys; I love boys books more than most boys! I love Heinlein; I love Pullman; I love the freakin' Tripods!

"LOTF's" setup is just as I remembered: A gaggle of boys are on a plane that crashes onto a deserted island. The backdrop to the book, published in 1954, is a hazy wartime apocalyptic vision of the civilization the boys have left; perhaps the developed world has finally destroyed itself. Standing in contrast is the island on which they land; it's untouched by profane humanity, until now. And, in case you miss the imagery, Golding helpfully refers to the plane crash site as a "scar" about 100 times in the first few chapters.

I haven't even made it 20 pages before I remember why I stopped reading the last time. Piggy. Poor Piggy. One of the first characters we meet, Piggy is overweight, asthmatic and bespectacled, which puts him at a social disadvantage. His first island acquaintance, Ralph, is fair and lanky and fit. When Piggy confesses his nickname to Ralph as a gesture of intimacy, and begs him not to repeat it to anyone, it's pretty easy to guess that this is going nowhere good. When Piggy tells Ralph how to blow through a conch shell to make a sound, Ralph promptly appropriates the instrument.

The saddest thing about Piggy is that he understands his lowly standing on the power scale. "Piggy bore this with a sort of humble patience," is a Golding sentence that fairly sums up everything we imagine to be true about our doomed, and depressingly resigned, hero.

Sure enough, when the surviving boys gather to determine who'll be their leader, Ralph wins. "There was his size, and attractive appearance; and most obscurely, yet most powerfully, there was the conch," writes Golding of the circumstances surrounding Ralph's rise to power, an eerie reminder that the subtleties of our democratic process have not advanced much beyond a fictionalized vision of wilderness chaos.

The short version of what happens among these young men is both simple and brutal: They screw everything up. Ralph realizes that they need a fire to send smoke signals to potential rescuers, but in their enthusiasm they set half the island ablaze, destroying their dry timber and probably killing a number of the youngest children -- we're never sure. A birthmarked "littl'un" who first reports a sighting of a local "beastie" is never seen again. It is the first and most innocent of the tribe's blunders.

The chief fire tender, Jack, once a boys choir leader, is initially a pragmatic organizer. At first Jack demurs from spilling the blood of one of the piglets that roam the island. The boys, writes Golding, "knew very well why he hadn't: because of the enormity of the knife descending and cutting into living flesh." But it's not long before Jack gets over that minor hang-up, sheds his society-dictated ambivalence, and becomes consumed by the hunting of the local porky population. It's not that the boys are starving; there's fruit on the trees and crabs in the sea. It's just that this dude really, really wants to kill a pig.

Jack's obsession with the kill leads him to neglect the fire, which goes out just as a ship is passing; the boys' hopes of being found are dashed. But Jack cares nothing of rescue. Instead, when confronted about his whereabouts, Jack "tried to convey the compulsion to track down and kill that was swallowing him up."

Of course, he finally consummates his passion. In the book's most gruesome scene, Jack and his buddies set upon a mother sow and her piglets. As the hunters throw themselves at her, the sow "squealed and bucked and the air was full of sweat and noise and blood and terror. Roger ran round the heap, prodding with his spear whenever pigflesh appeared. Jack was on top of the sow, stabbing downward with his knife. Roger found a lodgement for his point and began to push till he was leaning with his whole weight. The spear moved forward inch by inch and the terrified squealing became a high-pitched scream. Then Jack found the throat and the hot blood spouted over his hands. The sow collapsed under them and they were heavy and fulfilled upon her."

Killing and raping the mother. Hmm. Wonder what that's all about ... Were we really assigned this in eighth grade?

There is more metaphor here than your average 8th grader can handle. Is the sow Mother England? Are the orphaned piglets mirrors of the boys we're reading about? Is sexual energy tied to murderous impulse? Even a 13-year-old should know this is Oedipal, but is fulfillment of the Oedipal desire key to the breakdown of society? How stupid are these kids that they off the reproducing female of the species?

The wretched little brutes place the sow's head on a stick, where it gathers flies, and where Simon -- a little Zen mystic who stays out of island politics -- observes it from a trance state. The sow's head becomes the Lord of the Flies, and tells a hallucinatory Simon that the beast on the island -- first identified by the birthmarked little boy -- actually resides inside the boys. "'Fancy thinking the Beast was something you could hunt and kill!' said the head."

From there, it's all downhill. Jack and his mean-boy friends set up a chanting, pork-product-consuming camp where they reenact their slaughters, once accidentally killing Simon, thinking he's a pig. Whoops! They kill Piggy, too. When it happens, "His head opened and stuff came out and turned red. Piggy's arms and legs twitched a bit, like a pig's after it has been killed." Get it? Piggy? Pig? Get it?

Ralph looks to be doomed as well, until a soldier shows up on the island. Of course, the military official is just a grown-up embodiment of the societal violence Golding thinks is inherent in all men, pubescent or adult, but hey, I was happy to see him. And I was happy to see through his eyes that these menacing creatures I'd been reading about were just little boys.

I'm torn in my feelings about "LOTF." On the one hand, I find it a nasty, sophomoric book, not any different from what I thought it was -- a smug treatise on the evil of unchecked human nature.

On the other, perhaps my instinct to steer clear of it back then was not mere laziness or accident. It's easier to sum up and summarily dismiss Golding's philosophy in theory than it is to actually read a novel about it, to allow yourself to become attached to these characters, no matter how much you realize that each of them is a little turd. Even Piggy is sympathetic only because he is vulnerable, not because he provides a moral beacon or even diverting company. Ralph barely manages to evolve from a real jerk into someone capable of acknowledging that there might be some humanity in the fat kid. Here is Ralph, "adjusting his values:" "Piggy, for all his ludicrous body, had brains. Ralph was a specialist in thought now, and could recognize thought in another." Well congratu-fucking-lations, Ralph, you're a real mensch.

But perhaps that's just it. I hate these kids, in part because I recognize in them something familiar, something repugnant. As an adult, I actually believe better of human beings than Golding does. Sure, we've got bad apples, but I don't think it all comes down to porcine rape and murder.

But I doubt I had a fully formed or even an embryonic consciousness about that in the eighth grade, when human nature -- especially in group form -- is not at its cheeriest. Just as "Hamlet" is a young man's play, perfect for frightened youngsters paralyzed by decision and responsibility, so "LOTF" might speak most clearly and most terrifyingly to young teenagers whose bodies are roiling with hormones and unnameable night fears and impulses about how to exert power over themselves and others. It is when we are most like a murderous mob; in our almost-adult social and sexual lives, we are most likely to lose control.

So while I might have done myself a literary disservice in not entering Golding's dismal universe when it would have felt most relevant, I'm guessing that I did myself an emotional favor. I'm not one to look too long or hard at ugliness, especially, perhaps, when I'm aware of being implicated in it. Maybe that's what kept me from reading "LOTF" at 13. The miserable dance of despair over human nature might have hit too close to home. I'm pretty glad I didn't join the frenzied circle back when I was first asked to.