The mother of all battles

Cindy Sheehan has almost single-handedly launched an American antiwar movement. And in the process, she's exposed a president's feet of clay. 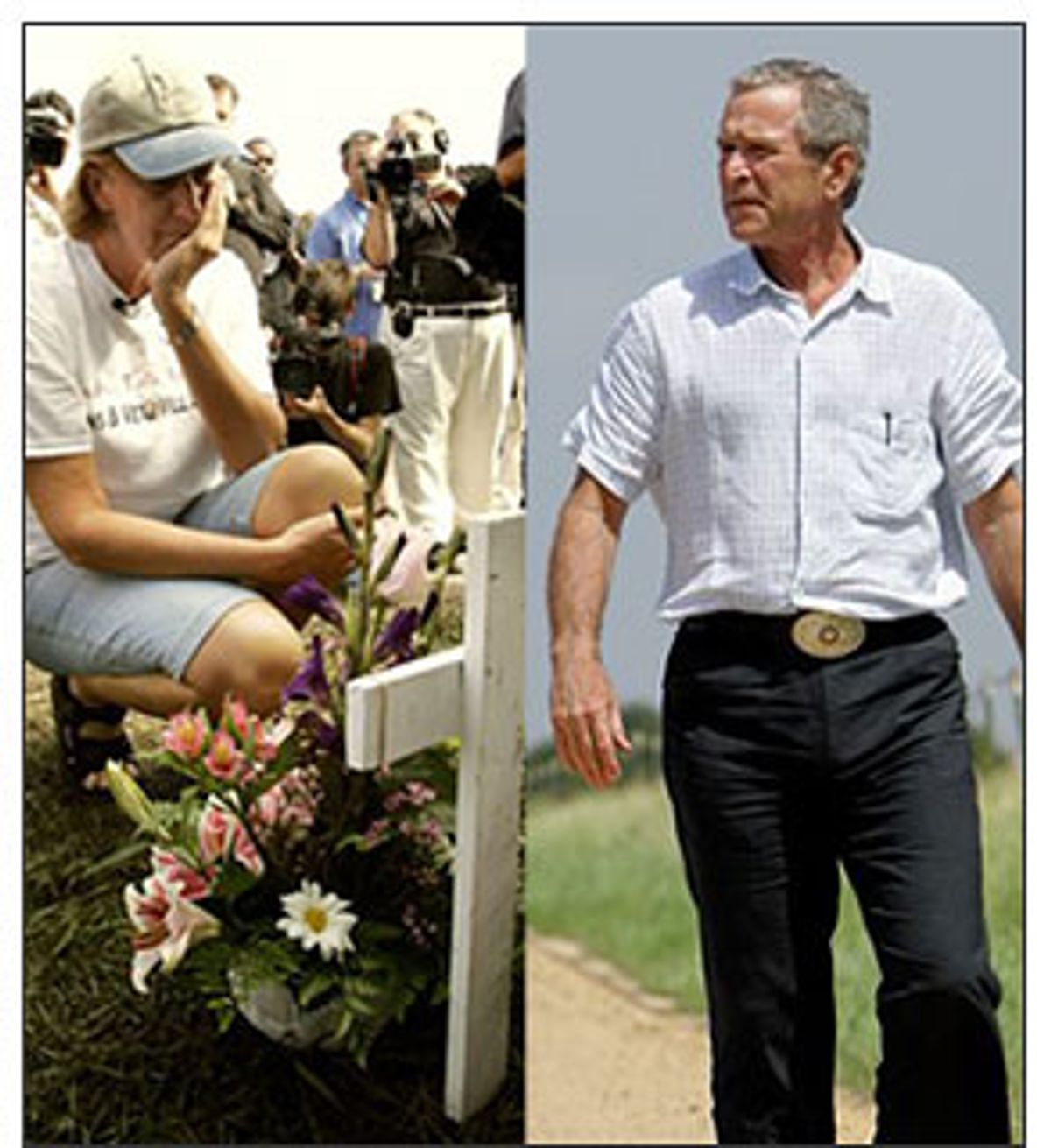 The smearing will continue, but it's already too late: Cindy Sheehan has launched an American antiwar movement. Maybe, as Matt Drudge blared over the weekend, she's said controversial things about Israel. Maybe the IRS will chase her for tax evasion, since she's reportedly announced that she won't pay taxes for 2004, the year her son Casey died in Iraq. Maybe her family has been shaken by her activism. Maybe the smears will even work, and cost Sheehan some of her mainstream political credibility. It doesn't matter: Someone else will take her place.

Sheehan's central demand -- that the president meet with her and explain why her son died -- has immense power in a country that's beginning to understand it was lied to about the reasons for the Iraq war, at a time when the carnage seems not only endless but futile. To build on that power, the antiwar movement being born at Camp Casey must understand and hold onto the source of Sheehan's moral authority: her authentic grief over her son's death and her fearless demand to talk honestly about it, even with supporters of the war.

Bush backers are clearly spooked by Sheehan, and they're shifting their stories as fast as they can get away with it. Early last week, you'll remember, she was a naive flip-flopper who supposedly changed her mind about the war and President Bush, because she'd had some mild words of praise for the president after they met last June. That line of attack didn't work, so this week she's a hardened left-wing agitator, plotting alongside the likes of Michael Moore, Medea Benjamin and Viggo Mortensen to help America's enemies. Need some proof? She's got Fenton Communications doing her media, for God's sake!

There's actually a tiny shard of truth in the latest right-wing attack on Sheehan, but it serves to underscore how dangerous she is to their cause. Sheehan has in fact been active in opposing the war since just after Casey died -- she starred in anti-Bush ads last year. (She was the lead in Michelle Goldberg's Salon feature on the ads last September.) Almost a year later, Sheehan has managed to break through to the American public, in a way that she obviously didn't in the Real Voices ads. But it's not because of the help of Code Pink and Fenton (which joined her after she was already in Crawford, by the way). It's because Americans are souring on the war and ready to hear what she has to say.

After more than two years of denial, the war is coming home to the American people. It's a journalistic clichi to talk about what you learned on summer vacation, but indulge me: With mostly network news and USA Today to provide my news-junkie fix, I learned this August that the war is finally a mainstream news story. I'm just old enough to remember grim footage from Vietnam on the nightly news, and it's starting to look familiar -- maps of the latest attacks, the dead and wounded soldiers, the grieving families and, now, Cindy Sheehan and antiwar protesters. If there's anybody still eating dinner watching the "CBS Evening News," now with Bob Schieffer and not Walter Cronkite, it's unsettling suppertime fare.

But the news is following public opinion, not leading it. The percentage of people who support the president's handling of the war has been sinking, as the number of casualties, and the apparent power of the insurgency, continue to rise. The other thing that's starting to break through is the president's cluelessness and callousness, his tin ear when it comes to the war and to Cindy Sheehan's appeal. Bush is such a polarizing force in American politics that it's hard to objectively describe either his personal political assets or his flaws. Most of his opponents can't even imagine his appeal to his supporters -- the regular Texan, the man's man, the guy you'd prefer to have a beer with over John Kerry -- and of course his admirers can't see what enrages his detractors, the smirking shiftless bully behind the regular-guy veneer.

Maybe it's just wishful thinking, but it felt to me as if with Bush's latest remarks about Sheehan over the weekend, the clownish lightweight his critics know and despise was beginning to shine through for all to see. If you haven't already, take a moment to ponder what he told Cox News about why he could find time for a bike ride on Saturday but not to meet with Sheehan:

"I think it's important for me to be thoughtful and sensitive to those who have got something to say. But I think it's also important for me to go on with my life, to keep a balanced life ... I think the people want the president to be in a position to make good, crisp decisions and to stay healthy. And part of my being is to be outside exercising. So I'm mindful of what goes on around me. On the other hand, I'm also mindful that I've got a life to live and will do so."

You don't have to be Cindy Sheehan to think that yammering on about "staying healthy" and living a "balanced life" while so many are suffering and dying in Iraq is unthinkably cruel, as well as unbelievably politically tone deaf. When I read Bush's quote -- I read it over and over -- I found myself wondering not just about his character but about his fundamental emotional health. It's as if he's confessing he couldn't stay "balanced" if he had to confront Sheehan's grief, and even worse, her questions about why her son died.

And yet, even as Sheehan's public relations victories give people reason to be optimistic about the administration's unraveling in Iraq, liberals and war opponents have to be careful not to snatch defeat from the jaws of victory. It's important to understand why Sheehan matters, and how she's gained traction on the war. Yes, it's the uptick in violence in Iraq, and the decided downturn in optimism, even among war supporters, who are continually defining success downward. Sunday's Washington Post had a great account of how the war architects are ready to declare victory -- not a Democratic Iraq but "some form of Islamic republic" -- and get out of Vietnam, I mean, Iraq. And yes, it's also true that August is a slow news month, giving Sheehan more room to tell her story. (I'd add that karma required that the president's stubborn monthlong vacation in Texas -- whether it's after he got a warning about terrorists using airplanes as weapons in 2001, on the eve of 9/11, or during one of the bloodiest months yet in Iraq -- would come back to bite him.)

But mainly it's the sincerity and humanity of Sheehan's core message. The anecdotes coming out of Camp Casey tell the story: Sheehan's quiet discussion with a soldier who opposes her views, which ended in a hug. Another Camp Casey activist had a respectful talk with a trucker who supports the war but stopped by to see if his dead son was listed among the casualties there. (He was, and the visit reportedly ended with him declaring his love for Sheehan.) Against the backdrop of an administration that refuses to acknowledge the dead, that prohibits photos of coffins and flies the wounded home under cover of darkness, that lets the president vacation and "stay healthy" instead of talking to the mother of a dead veteran, Sheehan and Camp Casey can get attention and win converts just by bearing witness to the violence and despair of a war whose goal nobody really understands anymore, in which victory seems less and less likely.

To build on her success it's important that organizers understand her appeal. Sheehan doesn't have all the answers -- she's smart enough to know she doesn't need to provide them. By simply asking why her son died, she's starting a dialogue about a war in which we've been lied to from the outset.

Moving forward and coming up with a broader message that can unify an antiwar movement will be tougher. Even war opponents aren't sure whether the message should be "Out now," or "Out soon," or "A lot of us out now and the rest asap." But if the goal is to build a big-tent antiwar movement, the messages must be simple, inclusive and from the heart.

The right will continue to use Sheehan's more controversial statements against her, of course. And it could, conceivably, hurt her appeal with the American people -- especially if antiwar allies choose to play up those positions. While I think there's plenty of room to blame the pro-Israel Project for a New American Century for helping lead us to war on false pretenses, as Sheehan does, let's remember that we won't end the war by requiring a litmus test on Israel and Palestine. Too often antiwar organizers have driven away supporters by leading with their most divisive views -- and by failing to communicate with those who hold different views.

Sheehan is outspoken -- and like all Americans, she has the right to be outspoken -- but she hasn't made that mistake. Camp Casey has become an outpost of grief and dialogue, and that's what gives it worldwide recruiting power. In Kentucky, the Republican grandmother of Marine Lance Cpl. Chase Johnson Comley, killed in Amiriyah, Iraq, earlier this month, told local media she wished she could join Sheehan in Crawford because she's "on a rampage" against Bush and the war. "When someone gets up and says, 'My son died for our freedom,' or I get a sympathy card that says that, I can hardly bear it," 80-year-old Geraldine Comley told the Lexington Herald-Leader. "And it irritates me no small amount that Dick Cheney, in the Vietnam War, said he had 'other priorities.' He didn't mind sending my grandson over there" to Iraq.

Michael Moore couldn't have put it any more harshly. Smart organizers will make sure the Geraldine Comleys of the world are always welcome at Camp Casey. Because, sadly, their ranks are growing by the day.