Why won't anyone ask Bush when he first learned of Valerie Plame's identity? That's one question he doesn't need to wait for the special prosecutor to answer. 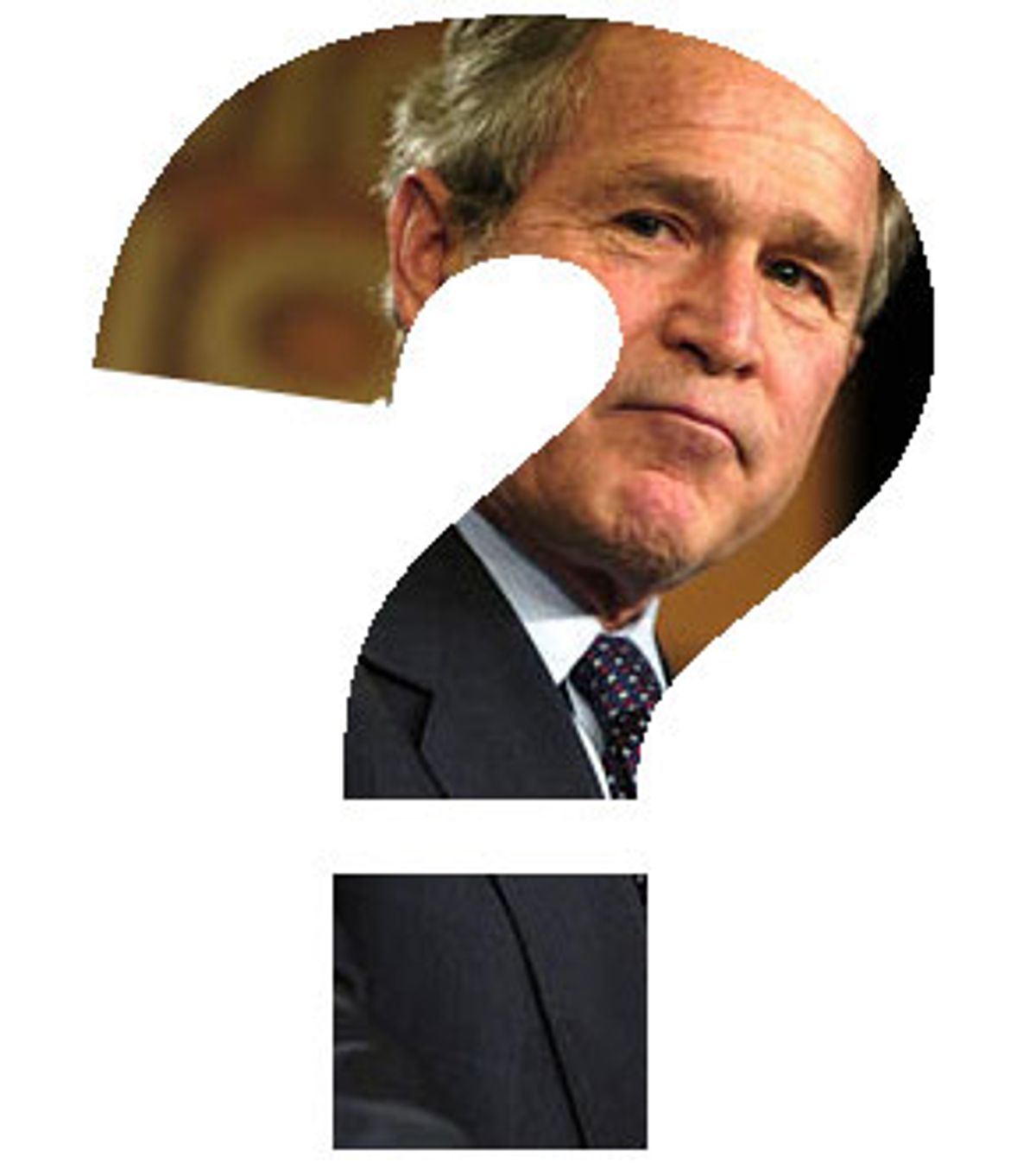 Ever since the outing of CIA operative Valerie Plame Wilson in 2003, the media has focused on whether President Bush would fire any people in his administration who were involved. Recent coverage has focused on the role, and fate, of deputy chief of staff Karl Rove. On July 31, Knight Ridder reporter Ron Hutcheson -- in an article that typifies the frame the media has imposed on the story -- speculated that "the president soon could face a painful choice between protecting his trusted aide or forcing his resignation to limit political damage."

Last week, Associated Press reporter Pete Yost wrote a relatively aggressive article about potential conversations between Rove and Bush about Valerie Wilson. But Yost's piece considers only the possibility that Rove lied about his involvement in the leak to Bush after the fact. Yost writes, "Whether Rove shaded the truth with Bush two years ago is a potential political problem."

Yet, strangely, even the most probing report has refused to raise the possibility that George W. Bush had any advance knowledge of or direct involvement in the leak. It's an irresponsible choice, considering Bush has more experience as a political operative than as president of the United States.

Most prominent is Bush's role as a powerful force in his father's presidential campaigns. His principal duty was enforcing strict loyalty to George H.W. Bush from everyone involved. Conservative strategist Mary Matalin, who held senior positions in the 1988 and 1992 campaigns, described Bush as "his father's trusted consigliere." George W., for his part, embraced the role and made it clear that anyone who crossed his father could expect retribution. In 1990, he told writer Ann Grimes, "I was the enforcer when I thought things were going wrong. I had the ability to go and lay down some behavioral modification."

Bush had started his career as a political operative nearly two decades earlier, when he left the Texas Air National Guard to work on the Alabama Senate campaign of Winton Blount. (Even at the young age of 26, the younger Bush was reportedly one of Blount's top four advisors.)

As one might expect, much of Bush's work for his father's presidential campaigns was done behind the scenes. Yet it's clear he was steeped in political minutiae and imposed few limits on what he was willing to do to get the job done. In 1986, veteran reporter Al Hunt predicted that Jack Kemp would receive the 1988 Republican presidential nomination instead of George H.W. Bush. When George W. saw Hunt dining with his wife and 4-year-old son at a Mexican restaurant in Dallas, he went up to their table and said, "You fucking son of bitch. I won't forget what you said and you're going to pay a fucking price for it." Bush didn't apologize until 13 years later, when the incident resurfaced in the context of his own presidential campaign.

In 1987, the George H.W. Bush campaign gave unusually close access to Newsweek reporter Margaret Warner. That resulted in a cover story titled "Fighting the Wimp Factor," in which Warner discussed "the potentially crippling handicap" that the senior Bush wasn't tough enough for the job. George W. was incensed. He called the magazine and "told reporters that his father's campaign would no longer talk to Newsweek." According to White House reporter Thomas DeFrank, George W. told him that Newsweek was "out of business." In his anger, however, Bush "went somewhat beyond the authorized message." The following day, a Bush campaign spokesman announced, "We're not cutting them [Newsweek] or anybody else off from their efforts to cover the campaign." George W., apparently, has never gotten over the incident. In his memoir, "A Charge to Keep," published more than a decade later, he wrote, "My blood pressure still goes up when I remember the cover."

After his father was elected president in 1988, Bush was placed in charge of a group called the Silent Committee (aka the "scrub group"), which was made up of "about fifteen blood-oath Bushies," according to the Texas Monthly. The purpose of the group was "to 'scrub' potential appointees for their loyalty and past service to Bush." The Washington Post noted at the time that George W. had a "somewhat more developed sense of political loyalty than even his father."

Although Bush left Washington after the campaign concluded, his role as loyalty enforcer remained largely unchanged. In November 1991, for example, then White House chief of staff John Sununu told a reporter the president had "ad-libbed" an ill-advised line during a speech about credit card interest rates. The younger Bush was infuriated that Sununu didn't defend his father. George W. told another White House staffer, "We have a saying in our family: If a grenade is rolling by the Man, you dive on it first. The guy violated the cardinal rule."

George W. was dispatched to Washington to deal with the Sununu situation. He met with Sununu and told him he should resign. On Dec. 3, 1991, Sununu -- also facing criticism for his misuse of government vehicles -- stepped down. Asked about the confrontation, George W. would only say, "The conversations between me and Mr. Sununu are going to be private. I talked to him, and then he and Dad reached an agreement."

The effort to discredit Joseph Wilson by exposing his wife as an undercover CIA agent is, for George W. Bush, entangled with the politics of Bush-family loyalty. Wilson, a trusted emissary of the elder Bush, served as deputy chief of mission at the U.S. Embassy in Baghdad, Iraq, from 1988 to 1991. During Desert Shield, Bush appointed Wilson to the post of acting ambassador. Wilson led negotiations that resulted in the release of several hundred American hostages, and as Wilson was quick to note, the president was pleased with his service. Bush sent Wilson a letter on Jan. 30, 1991, which read in part: "Dear Joe ... We appreciate your service to your country and your courageous leadership when you were in Baghdad ... Many thanks."

So how did the current President Bush react when he learned that Joe Wilson -- once a member of his father's administration -- was using what was learned on a CIA trip to undermine Bush's rationale for the second Iraq war?

It's a question the media has been unwilling to ask.

In response to all of these questions, Bush has deferred giving complete answers until the conclusion of special prosecutor Patrick Fitzgerald's criminal investigation.

But the media refuses to ask two questions that President Bush could not delay answering until he "finds out the facts": Mr. President, prior to July 14, 2003 (the day Robert Novak's column appeared), were you aware that Valerie Wilson was a CIA agent? And did you discuss her role with any other member of your administration?

The media is so far sticking with the idea that President Bush was an innocent bystander. Fitzgerald doesn't seem to share its perspective. Bush was interviewed by the special prosecutor for more than an hour. Floyd Abrams, an attorney who represented Time magazine in the case, said, "It's hard to believe the special prosecutor would be burdening the president with an interview unless they had testimony to the effect that the president had information."

No one outside the White House knows for certain the extent of President Bush's involvement. But one thing is clear: The press's assumption of ignorance is misguided, especially in light of George W.'s long history as a political operative. Allan Lichtman, a noted presidential historian, says the "presumption in presidential politics" should be "that the president always knows." It's not too late for responsible reporters to ask the right questions.