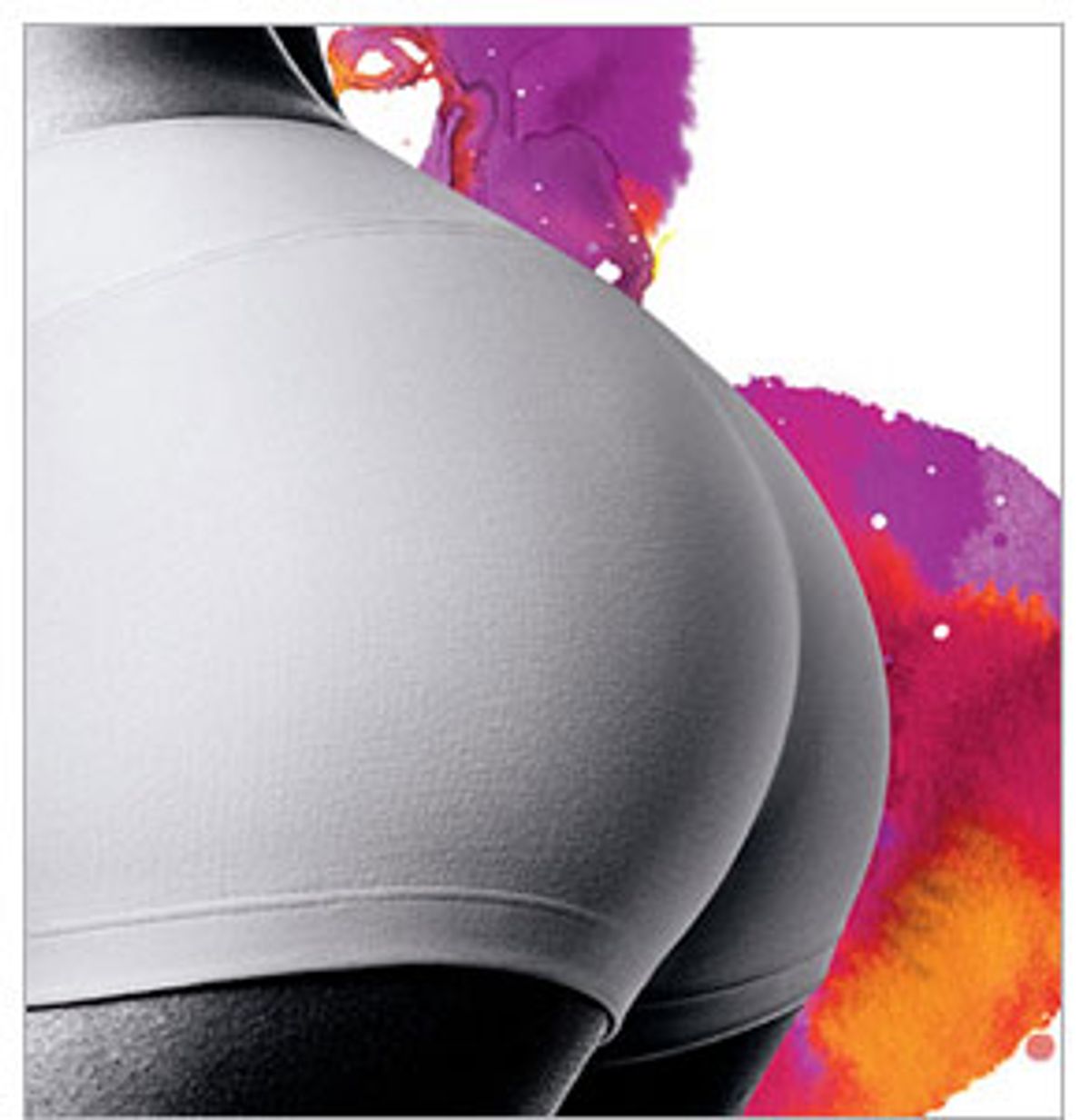 It was just a few weeks ago that the Dove "Campaign for Real Beauty" ads featuring recognizably curvy women got plastered on the walls of major metropolitan bus and subway stations. Only days ago, the unexpected media storm about the campaign reached a late crescendo with an Op-Ed in the New York Times. And now, seemingly out of nowhere, come the Nike Big Butts and Thunder Thighs, protruding from the pages of fashion magazines as part of the company's "Just Do It" campaign for fall.

One of the most provocatively placed posteriors shows itself a few pages into the September issue of Glamour, whose cover blares "800 Sexy Looks for Every Size!" Flip through a couple of images of actress Jennifer Connelly (who comes in one size: twig) and there it is: a big old can, clad in taut full-coverage underwear. Next to the image curve 19 lines of ad-copy verse:

My butt is big
And round like the letter C
And ten thousand lunges
Have made it rounder
But not smaller
And that's just fine.
It's a space heater
For my side of the bed
It's my ambassador
To those who walk behind me
It's a border collie
That herds skinny women
Away from the best deals
At clothing sales.
My butt is big
And that's just fine
And those who might scorn it
Are invited to kiss it.
Just do it.

It has to be said: The ad kicks ass. Sure, it's a little grrrrrrl-y, but that's a small bone to pick with two pages of advertising in a big fall-fashion issue of a major women's magazine, where we're traditionally treated to photographs of kohl-eyed consumptives peddling pencil skirts.

While the Dove "Real Beauty" campaign is riddled with contradictions (the "real" women celebrating their "real curves" are "really selling" cellulite cream, a balm for an imaginary flaw), the Nike ads are harder to fault. They seem to be selling Nike, the brand, rather than specific products. At the bottom of each ad is a link to Nikewomen.com, a Web site where viewers are asked the question "What story does your body tell?" and then shown the ads for each of the company's six anatomically specific celebrations of self. There are photos of knees, shoulders, hips, thighs, butts and legs, each with badass, and sometimes head-scratching, doggerel alongside. Web visitors can then view and purchase products -- shorts and sports bras and shoes -- made for that body part.

Nike spokeswoman Caren Bell said that the idea was conceived internally and by Nike's ad agency, Wieden & Kennedy. It launched this week in print ads in women's magazines, as well as in digital online publications such as Seventeen.com and Style.com. The body-part models, said Bell, are not professionals, but plucked from gyms around the country. "It's not about the ideal; it's about what's real," she said, adding, "We recognize that you can be fit and not be a model; you can be athletic and not be sample size."

Perhaps the Dove campaign and its attendant coverage have warmed us up for this vogue, which, according to Wednesday's New York Times, also includes a Chicken of the Sea tuna fish ad in which a svelte woman lets her gut hang out in an empty elevator. But it's still arresting to open up InStyle and see a pair of bulging, fleshy legs, flatteringly photographed in black-and-white against a paint-splotchy background, next to the words, "I have thunder thighs."

It's especially breathtaking to see it amid the typical fall fashion ads. Besides Glamour and InStyle, this month's Nike campaign is running in Lucky, Marie Claire, Self and, surprisingly, that paean to emaciation Vogue. In each of the magazines, the Nike ads look downright subversive, nestled as they are between images of women with visible rib cages and exposed breasts, modeling thousand-dollar jackets and go-go boots. Neighboring pages carry pictures of languid amazon Uma Thurman caressing Louis Vuitton bags, while gaggles of anonymous babes who haven't seen sunlight -- or hairbrushes -- for weeks populate Marc Jacobs' pages. A Gap "favorite fits" campaign spotlights jeans "designed uniquely for your body" in "original," "curvy" and "straight" shapes (all of which look "skinny" in the photographs) but somehow fails to showcase "bloated" and "pear-shaped" fits.

But the most memorable -- and funny -- thing about the Nike ads isn't even the images, but the voice of the campaign, those little ditties that veer all over the map and often end up in crazy-land, beginning with those butt-as-border-collie and space-heater metaphors. But that's nothing. Booty appreciation is old hat since the J.Lo-ification of the American rear. It's a whole other ballgame to show pictures of sleek stems next to copy that reads "My legs were once two hairy sticks," but now "They are revered./ Envied for their strength/ Honored for their beauty/ Hairless for the most part ..." This is the United States. Women don't grow hair on their legs. Especially in fashion magazines. Granted, the legs in the Nike ad look like they have never been inhabited by so much as a follicle. But the phrase "hairy sticks," even in reference to little-girl calves, is not one we imagine being bandied about on Madison Avenue as a savvy way to refer to gams.

And what about the shoulders, which "some say ... are like a man's"? The verse continues, "I say, leave men out of it." There's a hips page that orgasmically asserts, "My hips return to puberty/ When I'm in dance class ... And I don't understand them/ And sometimes they/ Don't understand themselves./ When the music stops/ They're still charged/ Don't touch me/ Sparks will fly." And the topper, the smoothly scarred knees, described in the ad as "tomboys." "My mother worries/ I will never marry/ With knees like that./ But I know there's someone out there/ Who will say to me:/ I love you/ And I love your knees./ I want the four of us/ To grow old together."

Huh. Banged-up knees and spinsterhood: the long-ignored connection. What's going on there? In part, the "leave men out of it, my well-used body does not inhibit my desirability" vibe makes a brawny statement about female empowerment. "It is about independence and being proud of who you are," said Bell.

Nike, a company named after the Greek goddess of victory, has a strong advertising history with women. Remember the 1995 campaign about athletic girls? "If you let me play sports/ I will like myself more/ I will have more self-confidence/ I'll be 50 percent less likely to get breast cancer/ I will suffer less depression/ I will be more likely to leave a man who beats me/ I'll be less likely to be pregnant before I want to/ I will learn to be strong." These ads tap the same vein -- perhaps even some of the same girls who 10 years ago were itching to get on the soccer team.

But there's something less earnest about the "What story does your body tell?" campaign, something intoxicatingly bizarre, like reality television, or that "Saturday Night Live" chestnut, "Deep Thoughts With Jack Handey." Like Handey's musings, they're hilarious in a way that feels casually haphazard, but which has clearly been meticulously planned by the brains over at Nike and its longtime "Just Do It" advertising agency, Wieden & Kennedy.

The free-associative giddiness continues on Nike's Web site, which, like the Dove "Real Beauty" site, runs videos of the models talking about their bodies. The big-shouldered woman talks about how swimming has made her broad, but that she likes her shoulders anyway: "Who knows," she says, "one day maybe I'll fall in love with a bad swimmer and he'll be flailing around in the deep end calling my name and I'll swim over and I'll save him and I'll fling his wet body over my shoulders and I'll carry him home to bed." She pauses. "I've said too much." Uh-huh. The leg model speaks derisively about a "size 2 ... maybe she was a size 4" woman at her gym whose "cat could have worn her workout bra as a collar." Oooh-kay.

There's something almost spooky about the frankness of the campaign, its willingness to attack the stereotypes -- and body types -- on which fashion and beauty merchandising is built. I'm enjoying these ads more than the Dove campaign, but both projects' outward denunciations of the perfection we've been programmed to strive for feel almost too healthy to be true. I've already written about the Dove contradictions, and I can't find a major problem with the Nike ads. Though I do have a vague fear that the media -- from Salon to "The View" to the Associated Press and the New York Times and everyone else who has showered this mini-movement with attention -- and all the women who are embracing these new advertising models are being laughed at.

Is this some sort of "Candid Camera" prank where advertisers trick consumers into believing that they really care about regular-size women? Will Allen Funt eventually emerge and cackle uproariously at how we fell for it, actually wrote about the possibility that this might herald a shift in the attitude toward what kinds of female shapes sell products? And will everyone then just go back to photographing underfed and over-coked Eastern European tweens?

Because if it's not a trick, then it feels like a sort of momentous, if carefully manipulated, moment: I'm watching a brief return to media health.

Not that it's perfect, far from it. For one thing, Nike's talking-model Web site makes clear what the print ads don't. That while these may be big, healthy women built like mighty brick houses, they all look to be under 25, if not under 22. It's a "real beauty" catch shared by the Dove campaign, in which the models, while cheerfully curvaceous, are also relative cubs compared to the free-spending mama tigers to whom they are pitching products. But Nike's sin in this regard is somehow less damaging. The company is, after all, selling athletic gear, not cellulite fixatives that women in their 20s would rarely need.

Then there's the fact that every woman celebrated in Nike's six ads sounds like one hell of an athlete. That's fine, and the company's prerogative as an athletic-wear manufacturer; it's certainly not damaging. But if, as Bell pointed out, the campaign is not about the ideal, but about what's real, it doesn't hurt to remember that for many American women, what's real is being out of shape. The idea of being physically fit, let alone being able to get beefy thighs from running a marathon, is a seemingly impossible ideal for many.

These butts and thunder thighs are mostly rock-hard muscle; there are no saddlebags. And while featuring them is surely a step in the right direction, real progress will be made when fashion plates share ad pages with women whose creases and folds and blemishes may be the product of triathlons ... or nightly bags of Doritos. (Salon's staff have already tried their hands at this, and hope that you will too.)

In the meantime, there's nothing to do but enjoy the end of this particular summer, when those who get their back-to-school fashion tips from glossy tomes may do so with a modicum of self-worth, a smidgen less self-loathing about their un-wraithlike physiques. This year, they'll get to feast their eyes on some very big butts, spiritual space heaters, warming them with the reminder that not everyone can collar her cat with her sports bra.