Recalling their meetings with the president, Cindy Sheehan says "he has no compassion" and Roxanne Kaylor calls him "a liar," but Sherry Orlando says he was "very sincere." 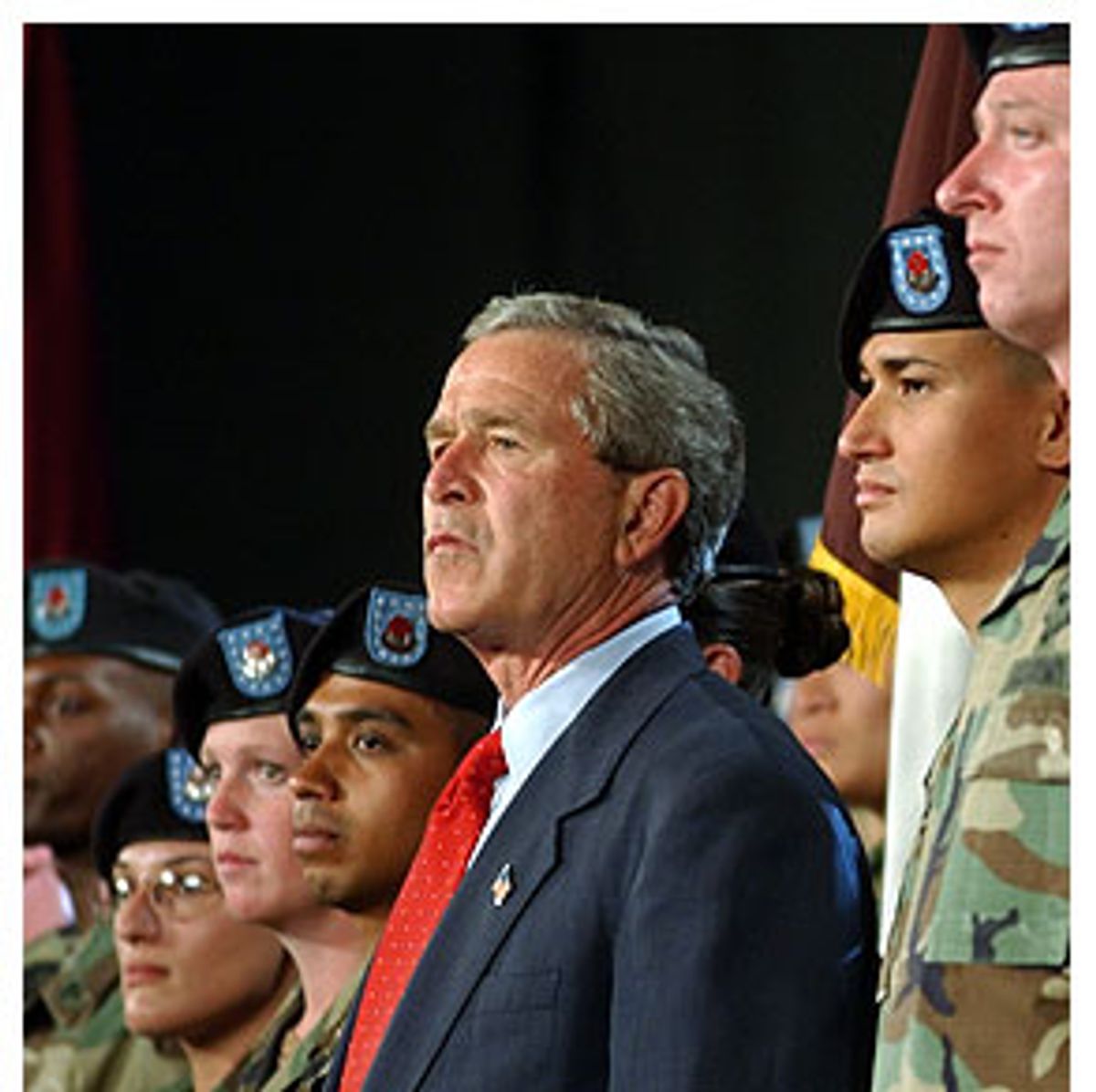 When antiwar catalyst Cindy Sheehan first met George W. Bush in June 2004, she said she wasn't a protester yet, but she still asked the president the $64,000 question.

"I said, 'Why did my son die?'" Sheehan told me in a telephone interview in June this year, weeks before she went to Texas to besiege the vacationing president. "And he said, 'I believe that everyone is born free and your son died for the freedom of the Iraqi people.'"

She said that when she met the president, she accused him of meeting with the families of fallen soldiers to generate good P.R. prior to the 2004 election. "He told me, 'This is not about politics,'" Sheehan said. "But I knew it was complete baloney."

When we talked in June, I hadn't heard of Sheehan. I was gathering string for an article about parents who met the president after their kids had been killed in Iraq. Bush had chosen a unique method of consolation: He was visiting military bases across the country, meeting privately with the families of fallen soldiers. No media. No photos. No recording devices. What was the president like behind closed doors? Some family members gave him glowing reviews. And some didn't.

Sheehan met Bush at Fort Lewis, Wash. Her son, Army Spc. Casey A. Sheehan, had been killed in Sadr City in early April 2004, just a few months earlier. She described Bush as insincere and ill-prepared. She said he kept referring to her as "Mom" because he did not remember her name. "He came in inappropriately jovial, like we should be honored that we should be there. He said, 'And who am I honoring today?'"

If the president tried to disarm an obviously prickly Sheehan, he failed. "He has no compassion," she said. "Being with him is like being with a shell. He does not have any compassion. He did not want to look at the pictures we brought of Casey." Sheehan said Bush kept changing the subject.

Arizona Republican Sen. John McCain was with the president that day. He also visited with Sheehan and her family. McCain supports the war. In comparison to Bush, Sheehan said McCain sparkled. "He wanted to hear about Casey and he wanted our story. I said, 'Is my son's death going to mean anything?' And he said, 'Not if we lose.'"

Like photos of American soldiers' caskets, Bush's mourning for the dead has been conspicuously absent in the Iraq war. But some presidents have mourned in public. President Clinton attended a service in the memory of the sailors killed in the attack on the USS Cole. In 1983, President Reagan went to a ceremony at Camp Lejeune, N.C., to honor those killed in the bombing of the Marine barracks in Beirut, Lebanon. President Lyndon Johnson attended the funerals of two soldiers killed in Vietnam.

Bush, though, has privately visited families at Fort Stewart, Ga.; Fort Carson, Colo.; Fort Polk, La.; Fort Campbell, Ky.; Fort Lewis and Camp Pendleton, Calif., among others. In most cases, families are placed in separate rooms in a building on a military base. The president shuttles from room to room, meeting privately with each family. That leaves only secondhand accounts of how the president acts when he has to look a grieving mother in the eye.

Former White House spokeswoman Claire Buchan has described the private meetings as an "appropriate" way to meet with the families of fallen soldiers, so the president can "express his appreciation both as commander in chief and on behalf of the American people."

Some families praised Bush. "He was very personable," Sherri Orlando said in a telephone conversation from Fort Campbell, Ky., where she works in the Fort Campbell public affairs office. Orlando's husband, Army Lt. Col. Kim S. Orlando, was killed when a group of Iraqis opened fire on him and fellow soldiers on a road near a mosque in Karbala, Iraq, in October 2003. "He was very sincere. He was very sympathetic. It was delightful meeting with him."

Bush met Orlando and others at a museum on base. "He expressed his condolences," she said. "To me, it happened so quickly. You are kind of at a loss for words. I told him that my husband believed in what he was doing and he supported the mission over there."

Roxanne Kaylor met the president at the White House on Memorial Day in 2003. Her son, Army 1st Lt. Jeffrey J. Kaylor, had been killed in a grenade attack in Iraq in April 2003. She described Bush as "gracious" but disengaged and unresponsive when pressed with uncomfortable questions. "He held my hand," she said. "I turned to him and I said, 'Jeff was a great person. It is too bad he had to die so early in life. I hope his death was not in vain.' He just stared at me. He said nothing. He just stared at me. He did not let go of my hand."

Kaylor has since become a rabid critic of the Iraq war and its shifting rationale. She said if she met Bush tomorrow, "I would tell him he is a liar and that he is no good for this country, and that he is killing great people. And for what reason? I don't know. Imagine if this happened to your own child. How would that make you feel?"

When Bush addressed soldiers at Fort Stewart, Ga., in June of this year, he wore a bracelet commemorating Staff Sgt. Michael G. Owen, 31, a psychological operations soldier killed by a roadside bomb in Karabilah, Iraq, in October 2004. The bracelet was given to Bush by Owen's wife, Crystal, in a private meeting at Fort Stewart just before Bush's speech.

"They put us in rooms and the president comes along and visits each one, kind of like a doctor's office," Owen said. "He came in and gave me a big hug. He said, 'Tell me about your husband, Mike.' He wanted to know everything about him. He was very genuine. He did get teary-eyed with me when I started crying. I told him about Mike and I and our life and how long we had been married. I pulled out a picture to show him who I was talking about."

Owen said she gave the president the bracelet and asked him to promise to wear it. "And he said, 'Do you trust me?' And I said, 'Yes, sir, you are my husband's commander in chief.'" Owen told the president she was worried that the troops might get pulled out of Iraq before the mission is complete. "I said, 'I'm very worried about the pressure you are getting. I don't think you can put a time on withdrawing troops. My biggest fear is that you would pull out too early and my husband's death would be in vain.'"

While Sheehan today wants to meet with the president again, some antiwar activists said they'd like just one meeting. Jane Bright's son, Army Sgt. Evan Ashcroft, was killed in July 2003 when his convoy came under attack north of Al Hawd, Iraq. He was part of the 101st Airborne Division, based in Fort Campbell, Ky. Bush visited Fort Campbell in March 2004 but Bright did not get a call to come to a private meeting.

Bright said thinking about meeting Bush gave her a feeling of "revulsion." But she would have gone. "When you lose a child, it is a journey. I would have gone just for the opportunity to ask him the questions I have been asking myself. Why did he create this conflict? Did he destroy Iraq just so Halliburton could rebuild it?"