"A Factory of Cunning" by Philippa Stockley

In this well-crafted comedy of manners, a wickedly charming woman with a secret past stirs up trouble in 18th century London. 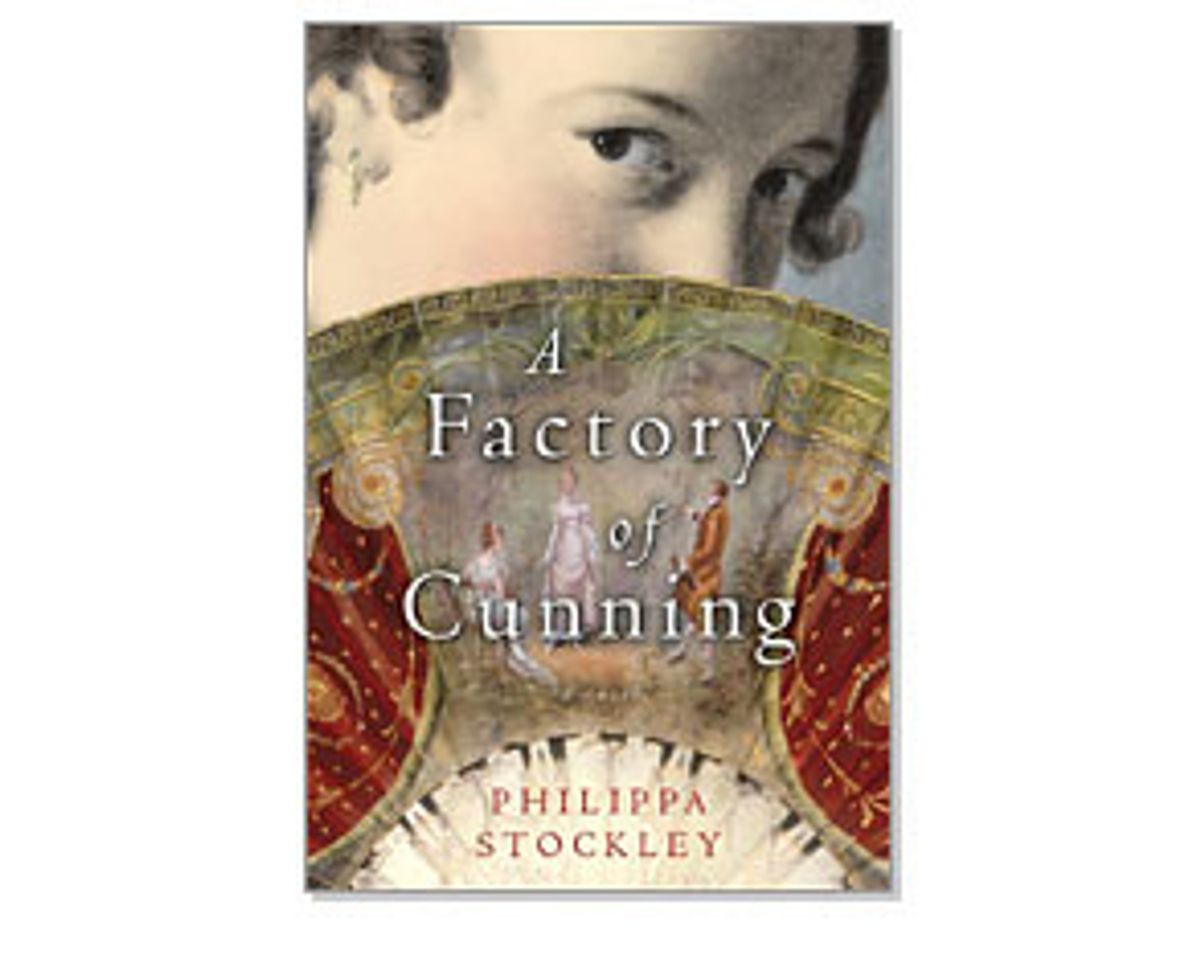 Mrs. Fox is not what she seems. The readers of Philippa Stockley's "A Factory of Cunning" know this from the very moment the lady's satin-clad foot steps onto the banks of the Thames in 1784. Freshly arrived in London from Amsterdam, she pretends to be a modest but well-connected widow; we know that she is really a French noblewoman fleeing a scandal that transpired several years earlier in her native land. It's only much later in Stockley's fizzy, twisty comedy of manners and morals that the astute reader will recognize "Mrs. Fox" as the veteran of a shocking affair described a long time ago in a book by somebody else.

Whoever she is, Mrs. Fox is a very wicked woman: manipulative, spiteful, selfish and misanthropic to a degree that nearly takes your breath away. She's also clever, beautiful, charming and a consummate liar. The people of London -- and especially anyone foolish enough to get on her bad side -- won't know what's hit them by the time Mrs. Fox is done amusing herself. In particular, she intends to do a favor for a gentleman back in Amsterdam, the only human being, it seems, for whom she has any fondness. His old enemy, the rich, coldblooded, middle-aged rake Earl Much, ought to be taken down a few notches. Mrs. Fox is happy to oblige.

"A Factory of Cunning" is a well-made entertainment for people who don't go soft at the prospect of corsets and powdered wigs. The 18th century milieu Stockley describes is so ruthless and exploitative that any shred of sentiment attached to the better-dressed past will be burnt to ashes on contact. Stockley's fidelity to the period and its language is nearly faultless; the novel even includes a glossary for those readers unfamiliar with terms like "macaroon" and "slop-shop" or puzzled by the characters' references to "that Shandy man" and Newgate. There are no missteps or anachronisms here to make you grind your teeth if that sort of thing irritates you, yet the pacing and ingenuity are contemporary.

The story is told mostly in letters and Mrs. Fox's diary entries, and her shriveling wit is one of the novel's chief pleasures. Her Parisian disdain for London society has her describing one arriviste patron of the arts as a man "to whose purse the finest of everything is as nothing and the finest of nothing everything. He has the judgment of an atom, a particle of sense, and an immense sensibility -- such a striking amalgam of wealth and witlessness that someone should sell it as Essence of Englishness." Admittedly, this lady isn't perfectly credible as a foreigner. Her command of the language is formidable. And when she sniffs at London for being the kind of place "where pattern-book gentility passes for intellect and the profile of a mule for superiority" -- a joke about the typical physiognomy of the British upper classes -- she sounds rather English herself.

For a main character as thoroughly malevolent as Mrs. Fox to carry a novel, she has to have great energy in addition to being smarter than everyone else. Stockley packs her book not only with schemes and intrigues, but also with metaphors of a near-freakish vigor: a red-velvet-line theater box that sets off the women inside it "like teeth," a coachman ducking his head down inside his collar until he resembles a "volcano," quips and digs and startling images come flying off the pages so rapidly you can barely register them all. The momentum sweeps the delighted reader along until the end, when, alas, we're confronted with just how ruthless our "heroine" really is, and some kind of moral equilibrium is restored. It's a tricky transition to execute, and Stockley doesn't quite pull it off. But if the arrival is bumpy, the ride up until that point is as plush as a spin in a coach-and-four.