In Terry Gilliam's lush fantasy, the enchanted forest is livelier than any of the human characters. 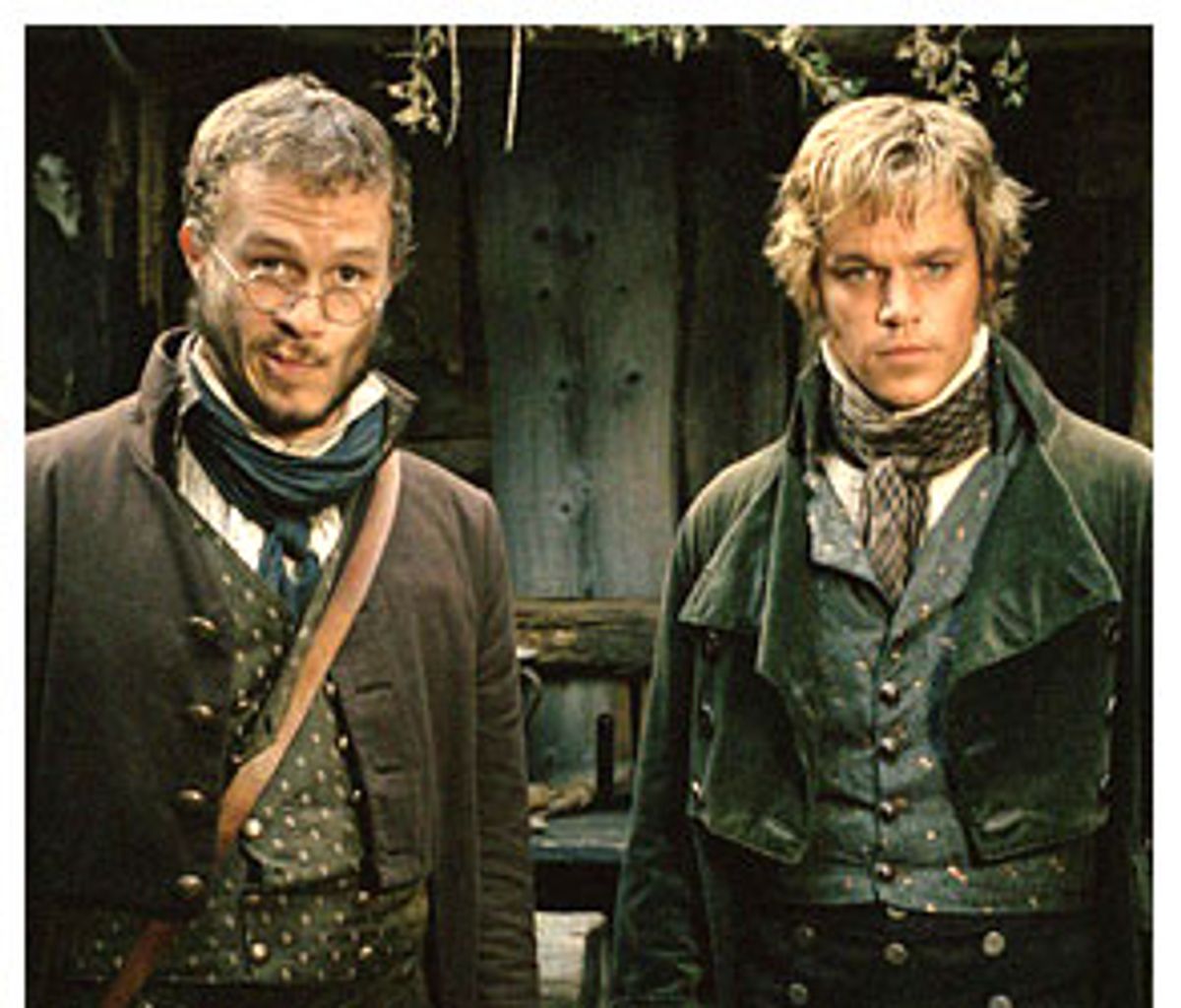 Directors, we always assume, like to keep as tight a rein as possible on the movies they're making. But it sometimes seems as if Terry Gilliam wants his movies to run off with him, to take control of him, rather than the other way around. That's not a bad thing if the results are as inspired as, say, "The Fisher King," a cracked, heartfelt masterpiece, or the melancholic sci-fi ballad "Twelve Monkeys." But Gilliam is also known for dreaming so big that sometimes his movies never see the light of day. (That story has been told, in good-humored but painful detail, in Keith Fulton and Louis Pepe's documentary "Lost in La Mancha: The Unmaking of Don Quixote," about Gilliam's doomed attempts to adapt Cervantes.)

Gilliam doesn't deserve those kinds of failures: When his ideas work, they're golden. But when they don't -- or maybe when he just can't find his way through them -- sitting through his movies can be exhausting. And his latest, "The Brothers Grimm," is a workout. Like the enchanted forest that figures so prominently in the story -- a place where little girls are whisked off by unseen evil, where wolves change into men and back again, where a beautiful, self-centered queen lives only for (and in) her mirror -- "The Brothers Grimm" is a sprawling expanse of vegetation, dazzlingly alive in some places and overgrown and unruly in others. Gilliam himself seems lost in it, without the benefit of compass or bread crumbs.

Heath Ledger and Matt Damon play, respectively, brothers Jake and Will Grimm, extremely faux versions of the real Brothers Grimm, who collected a bunch of folk tales in the early 19th century that continue to scare the living daylights out of children (and grown-ups) today. Jake and Will make a living roaming the French-occupied German countryside, using bogus tricks to "rid" villages of their assorted witches and demons. Will is the practical one, the one who makes the cheap, shiny armor that's part of the brothers' uniform, and the one who has little trouble getting girls. Jake is the dreamer, the one who almost believes, for real, in the supernatural forces the brothers are allegedly fighting. He's also tortured by the fact that, as a kid, he sold the family cow for a handful of magic beans -- he was supposed to get money to buy medicine for his gravely ill little sister, and you can just guess what happened.

The brothers land in hot water -- though, luckily, not hot oil -- when the French authorities (Jonathan Pryce is their spoiled, wormy leader; his buffoon of a henchman is played by a tiresome Peter Stormare) collar them for their fraudulent activities. They have one last chance to prove they really know what they're doing: The girl children of the village of Marbaden are disappearing, one by one, seemingly being swallowed by the forest that borders their burg.

So Jake and Will set out to save the girls, and their own skin, but the gravity of their mission only intensifies their inability to get along. (There's also a love interest, a fierce, wise huntress played by Lena Headey, to further complicate things.) Will and Jake squabble and cuss like 19th century versions of Oasis' Noel and Liam Gallagher, ferociously jabbing at one another in the way brothers do when they can't stand each other but are, damn it all, bound by love. Will won't let Jake forget those magic beans, and the tragedy of Jake's life is that he couldn't forget them if he tried. Gilliam, working from a script by Ehren Kruger, sets the brothers up not just as flesh-and-blood opposites, but as a metaphor for the conflicted feelings that fairy tales (and movies, too) evoke in us: We know we're supposed to rely solely on fact and reason as we try to understand the world around us, but we can't let go of our dreams and fantasies, either -- nor would we want to.

That's a delicate, interesting idea, the sort of thing Gilliam should be able to pull off, if anyone can. But although "The Brothers Grimm" is partly an inventive fantasy, it's also a cluttered, jangly action picture, and there's too much noise and commotion for Gilliam's subtler ideas to really resonate. He amps those ideas up so they won't get lost (including, for instance, a scene in which Will confesses that he's frustrated because he can't always protect his brother), which turns them into neon-lit Freudian themes instead of intriguing subtexts. The actors don't always seem to be completely comfortable in their roles, either: Damon and Ledger have worked up a decent sparring chemistry, but their characters are flat and awkwardly cartoonish, more like constructs than flesh-and-blood people we can feel something for.

But then, the enchanted forest has more life than any single human character in "The Brothers Grimm." In that forest, Gilliam's imagination is truly free. (Cinematographer Newton Thomas Sigel and production designer Guy Hendrix Dyas are the magic workhorses pulling his crazy, wayward chariot.) He takes the subterranean threads of fear and wonder that fairy tales instill in us and tweaks them gently -- and, occasionally, yanks them violently. We see a little girl in a red hooded cloak treading through the forest, with some form of invisible wickedness padding behind her. The trees in this forest seem to breathe: Their mindless limbs reach out to embrace and grab anyone who comes close. A magic toad looks no more distinguished than the garden-variety sort -- Gilliam perhaps realizes that toads are so marvelous just as they are, with their delicate, dry, nubbly skin, that they don't need any camera magic to make them special. Some of Gilliam's touches are so imaginative -- and so unnerving -- that they just may make an appearance in your nightmares (and parents of very young children, or children prone to bad dreams, are hereby forewarned): A little girl who has been splashed with what seems like ordinary mud tries to wipe that mud off her face -- and as she wipes, her features smear into a smooth, creamy blur.

The genius of "The Brothers Grimm" -- and there is genius here -- lies in those shimmering, evocative details. At its best, "The Brothers Grimm" is like some strange, hoary picture book come to life, the sort of thing your parents might have hidden away in a cupboard because they knew it would scare you. Gilliam is like a kid who, having found the book, can't stay away from it. He's under its spell, as he wants to be, but his reverie has kept him from thinking as clearly as he should. Sometimes we need dreamers to be filmmakers too.