Why the Bill and Melinda Gates Foundation gave more than $10 million to the Discovery Institute, champions of "intelligent design." 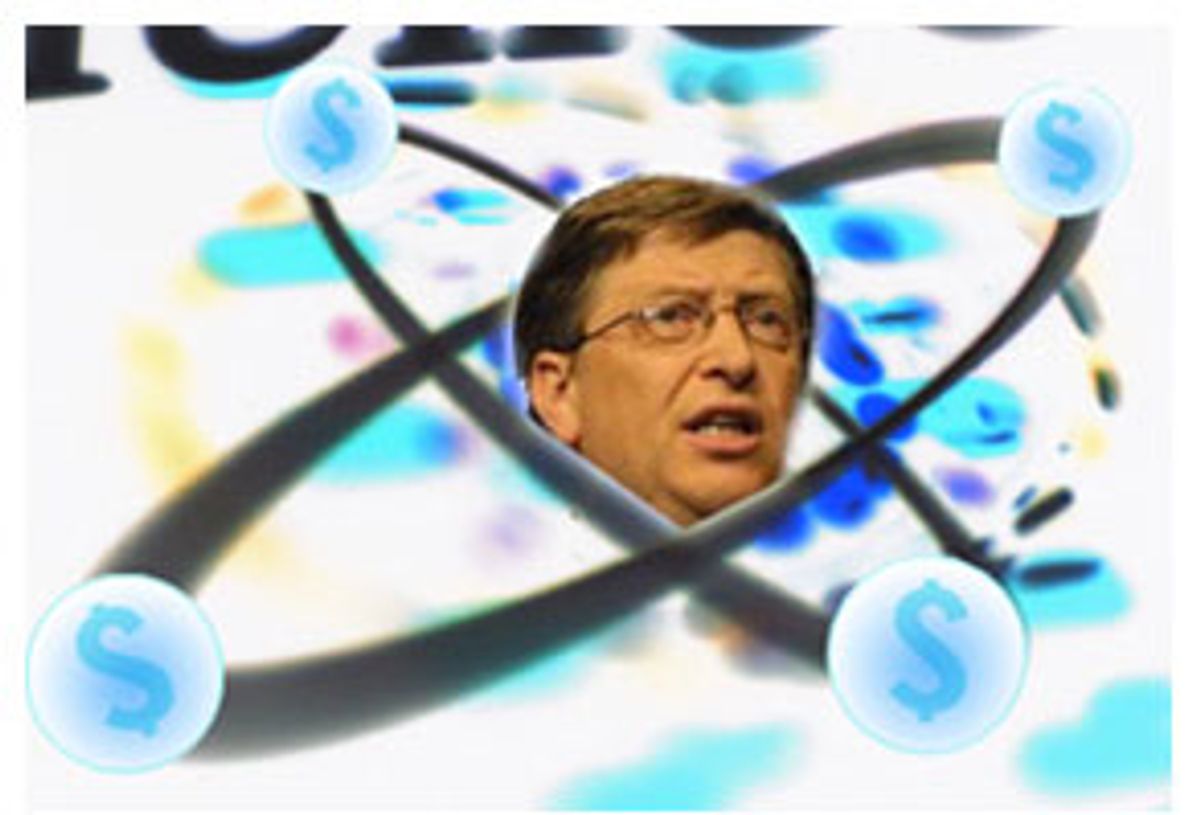 No one could deny that the Bill and Melinda Gates Foundation cares deeply about science. The foundation, by far the nation's largest philanthropic organization, donates hundreds of millions of dollars every year to promising medical research, including vaccines and treatments for malaria, AIDS and tuberculosis. The foundation also cares about education. In 2004, it donated $720 million to improve American schools. Both Bill and Melinda Gates themselves frequently argue for schools to ramp up their science and math programs to create a competitive American workforce for the future.

It comes as no small surprise, then, to learn that during the past five years the Gates Foundation has pledged more than $10 million to the Discovery Institute, the Seattle think tank that is leading the charge to bring "intelligent design" to the masses. Advocates of I.D. say Darwin's theory of evolution is flawed and that certain complex biological features -- such as, for instance, the human eye -- point to the presence of a "designer" at the source of creation. The scientific establishment roundly rejects I.D. They say it represents a back door through which religious views are being snuck into public education. Due to the Discovery Institute, I.D. is popping up in school districts all over the country, fueling a renewed controversy over evolution that has even made its way into national politics. George W. Bush recently espoused Discovery's views by urging teachers to make sure "both sides" -- that is, I.D. as well as evolution -- are "properly taught."

The Gates Foundation responds that it hasn't abandoned science to back intelligent design. Greg Shaw, Pacific Northwest director, explains that the grant to Discovery underwrites the institute's "Cascadia Project," which strictly focuses on transportation in the Northwest. The Discovery Web site lists several program goals, including financing of high-speed passenger rail systems and reduction of automobile congestion in the Cascadia region, which encompasses Oregon, Washington and British Columbia. (The Gates Foundation, which is based in Seattle, gives a small slice of its money -- about $40 million in 2004 -- to groups that aim to improve life in the Pacific Northwest.) Poor transportation is a key problem for low-income families, Shaw says, and "when Cascadia came to the Foundation, there was a sense that there had not been a regional approach to studying transportation. Cascadia's plan to solve the transportation problem "was very much a bipartisan state, local and regional approach with a variety of states and counties and mayors." He didn't know if people at the foundation were aware of Discovery's I.D. work at the time they decided to fund Cascadia. "It is absolutely true that we care about sound science as it pertains to saving lives," he says. "The question of intelligent design is not something that we have ever considered. It's not something that we fund."

The Gates Foundation first gave money to Discovery in 2000 -- $1 million for the Cascadia initiative. In 2003, the foundation promised $9.35 million, with $1.1 million distributed annually for the first three years, and the rest dispersed according to Cascadia's progress. Only since Discovery stepped up its promotion of intelligent design has public scrutiny of the conservative think tank increased. Time magazine recently noted the Gates affiliation with Discovery, as did Jodi Wilgoren in her profile of Discovery in Sunday's New York Times. Wilgoren pointed out that an annual $50,000 of the grant goes to the salary of Bruce Chapman, the founder and president of Discovery. Chapman oversees the entire institute -- including both the Gates-funded Cascadia work and the center's promotion of intelligent design. But Shaw says the foundation money for Chapman "is for the time he's putting in on the transportation project," not for the work he's doing on I.D.

Several biologists and representatives at organizations that promote evolution education say they have no problem with the Gates grants to Cascadia. "I've been getting so many e-mails from people who are frothing at the mouth at this," says Eugenie Scott, the executive director of the National Center for Science Education, whose tag line is "Defending the Teaching of Evolution in Public Schools." "There is confusion about, 'What is Bill Gates doing supporting intelligent design?'" As far as Scott is concerned, the Microsoft chairman is not funding intelligent design.

Even if the Gates money doesn't directly fund Discovery's I.D. work, the grant has created an image problem for the foundation. "Its support of the Discovery Institute is not commendable because of the murky situation created," wrote Francisco Ayala, a biologist at the University of California at Irvine, in an e-mail. "Many people will not notice that Gates' support is restricted to one particular project ... I am reminded of the saying, 'The wife of Caesar not only should be chaste, but also appear to be so.'" Ayala raises an intriguing question: As the Discovery Institute becomes increasingly associated with intelligent design, does the Gates foundation worry that its own good name might get tied up in the political storm? "It's a good question," Shaw says. "When a grantee's work is so much associated with something not related to the work you are funding, how does that affect your grant? I don't know the answer to that. It's something we are going to have to look at."

Other foundations that have given money to Discovery also seem unsure whether the donations may tarnish their image. Still, all insist the money they gave to Discovery does not go to fund Discovery's intelligent design work. Alberto Canal, a spokesman for the Verizon Foundation, says the five-year, $74,000 grant the foundation made to Discovery in 2001 was earmarked for a lecture series focusing on technology. "We weren't looking at what some of the other centers [at Discovery] were doing," Canal says. Discovery's lecture series focused on "technology and how it fits into public policy," areas that are in line with Verizon's goals. The David and Lucile Packard Foundation gave $200,000 to Discovery's Cascadia center in 2002. Chris DeCardy, a spokesman, says that "we now know they focus on intelligent design, and with the investments we make in science, it's not an area we would support." A spokesman for the the Weyerhaeuser Company Foundation -- affiliated with the Weyerhaeuser forest-products company -- says that the foundation's several donations (many more than $20,000) over the past five years also went to fund Cascadia work, not intelligent design.

The Gates Foundation's grants to Discovery are not the only connection Microsoft has to the institute. Mark Ryland, who heads the institute's Washington office, is a former Microsoft executive, and a Microsoft employee named Michael Martin is a current member of Discovery's board. A spokeswoman for Microsoft says that Martin served on the board in his personal capacity, not as a representative of the company. In an e-mail, Keith Pennock, the program administrator of Discovery's Center for Science and Culture (which runs its intelligent design work), concurs. "Mr. Martin is a member of the Discovery Board in his individual capacity and does not represent the Microsoft Corporation. Does Microsoft support Discovery's work on intelligent design? No."

Pennock ends his e-mail to Salon with criticism over the inquiry into the groups that finance Discovery's work. "Finally, I have been asked to advise you that it is unseemly for people who dislike one program at a think tank (or a university -- or an on-line magazine, for that matter) to try to pressure funders of other programs there," he writes. "It is illiberal and contrary to the spirit of free speech."