I was disgusted last week as I watched some of the Gaza settlers using their children as pawns. Then I realized that I fill my kids' heads with dogma too. 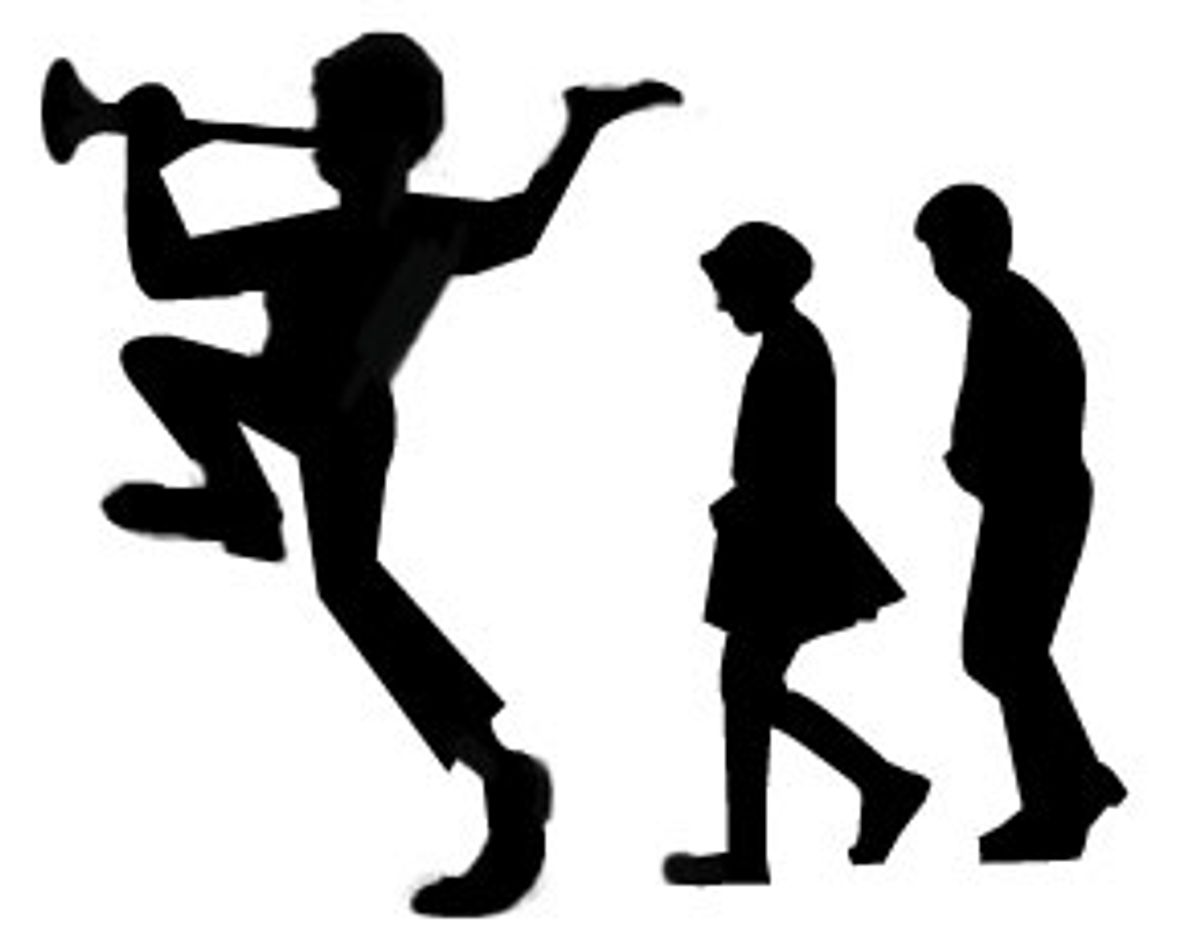 When one settler family was forcibly removed from their home in Kerem Atzmona in the Gaza Strip last week, the patriarch put a sign on the door: Judenrein. His wife instructed their children to walk with their hands raised above their heads. She had sewn orange stars on their lapels. Their dramatic and scripted exit was clearly meant to evoke the famous 1943 photograph of the little boy surrendering to the Nazis in the Warsaw Ghetto. Some of the members of the Israeli army who were supervising their removal wept. Had I been there, in uniform, I'm not sure I would have been able to refrain from hauling the parents of those children out of the house by their hair, and giving them a klop on the ass for good measure.

The treatment the settlers received from those Jewish soldiers was so thoughtful, so judicious, so tender. The officers in command of the evacuation spent hours negotiating with the settlers, listening to their ravings, before gently escorting them away. And yet, over and over again we heard the settlers analogizing their suffering to the massacre of millions during the Holocaust. Dikla Cohen of the settlement Neve Dekalim said, "I feel that today was a pogrom."

Are these people so blinded by their fanaticism that they believe that the trauma of relocation can be compared to the horrors of Auschwitz and Babi Yar? Are they so benighted that they believe that being given a quarter of a million dollars in compensation for your house is akin to watching a Nazi soldier spear your newborn child on the tip of his bayonet?

I watched the Gaza settlers with rage in my heart, but I watched the soldiers managing their evacuation with only admiration. This was the Israeli army of my childhood, the one for whom my oldest brother nearly lost his life in the Yom Kippur War. I had long since considered that army a myth, one born of my father's romantic storytelling. When I was a girl I'd listen to him recount battle stories from the War of Independence in 1948, when he and his compatriots fought with insufficient weapons and ragged uniforms, but with more than enough will to forge a country. But the myth of that army had faded for me, lost in the gloom of the Lebanon War and the bitter misery of the intifada.

I was born in Israel, to Canadian parents. My father immigrated in 1948, part of a wave of young men and women who came as pioneers, to fight for a Jewish homeland. Their motive was in large part a reaction to the Holocaust, and their slogan was "Never Again." We moved back to North America in 1967, when I was 2 years old, but my father was never happy here. He pined for Israel, and he instilled in me both a sense of longing for a place I barely remembered, and the conviction that no Jew could call anywhere else home.

When I was younger I was a good soldier in my father's army of memory. I retained my Israeli accent, took up Israeli folk dancing, marched in the Israeli Independence Day parade in New York wearing blue and white. I was a member of a Zionist Socialist youth group, and spent my summers at its camp, wearing ugly leather sandals and singing songs about the scent of eucalyptus along the banks of the Galilee.

The person I was back then would surely have had a less extreme reaction to the evacuation of the Gaza settlements. I never supported the settlements; my own family of former kibbutzniks was far too well ensconced in Israel's left wing to think of the West Bank and Gaza as anything other than occupied territories. Still, I probably would have felt pity for the settlers, and some part of me might even have understood their fanaticism as a starker version of my own Zionism. When I was still under the sway of my father's opinion, I believed passionately in the necessity and inevitability of a Jewish state. Now, however, my sense of tragedy outweighs my hopefulness, and while I still tell my children stories of riding horses through the Jordan River, I can't help fearing that the Zionist enterprise will one day be seen to have done the Jewish people more harm than good. Our tenacious hold on this strip of homeland has become the scapegoat for the world's terrorism and this wouldn't be the case if we remained a people of the diaspora. My father is sure that Israel keeps the Holocaust from happening again. I worry that it might hasten its recurrence.

Last Tuesday, when the pullout from Gaza was more or less complete, I was in the Salt Lake City airport, musing about that couple in Kerem Atzmona and their manipulation of their children's images. Gaza was full of protesting kids, young Jews from the West Bank who had smuggled themselves in to make a stand against their oppressors. And who were those oppressors? Other young Jews, in khaki instead of the modest hippie mufti preferred by the protesters.

I was thinking about the way the settlers indoctrinated their children in this permanent political firestorm, and how it wasn't so different from the way my own father had indoctrinated me into Zionism. Just as these thoughts were going through my mind, I found out that because of President Bush's impromptu visit to the Veterans of Foreign Wars Convention, the Salt Lake City airport would be shut down for four hours. The resulting delays meant that my husband, my kids and I were stuck overnight in an Airport Inn. I cursed Bush and his cowardice, raving that if he'd just met with Cindy Sheehan for 15 goddamn minutes he wouldn't have had to schlep all the way to Salt Lake City to prove that he cares about the thousands of American soldiers who have died in Iraq, and we and the rest of vacationing America could have made it home without incident.

In the middle of my selfish, only half-serious tirade, I glanced over at my kids. They were nodding along, their faces twisted in rage. They hate George Bush, loathe him with a passion that would make Michael Moore proud. When my then 3-year-old was learning about Purim last year she very seriously announced, "There are two bad men in the world, Haman and George Bush." (The next month she added King Pharaoh and Donald Rumsfeld to her panoply of evil.) Looking at my children, all of whom spent last fall decked out like miniature John Kerry advance men, I realized that there is a fine line between education and indoctrination. And just like the Gaza and West Bank settlers, just like my father, I have long since leapt across that line.

It is, obviously, a matter of degree. The Gaza family's indoctrination is much more intense than the casual Bush-bashing that goes on in my house. But then, right now the sanctity of my home isn't directly at stake. As angry as I am at those settlers, as disgusted by their use of their children as pawns, listening to my own kids parrot back their disgust for all things Republican, I realized that we are not so different after all. The settlers enlisted their children in the battle for Gaza because they are certain they are right. They feel their children deserve to learn the truth. My children have learned as many adamant truths at my knee. They have learned to blame George Bush and the Republican Party for everything from the war in Iraq to global warming to the vilification of their favorite television shows.

I have no idea what causes a child to rebel, to reject her parents' beliefs as I've come to reject my father's. I don't know why some become, like the teenagers who barricaded themselves behind concertina wire in the West Bank town of Homesh, even more fanatical soldiers in their parents' self-same army of ideology. Perhaps my children will one day pledge their loyalty to the Republican Party. Or perhaps they'll dismiss my liberalism as mild pap, and become anarchists. Either way may well be a reaction to my manipulation, my values. We are all the product of the indoctrination we received at the hands of our parents, even when we are repudiating that ideology. What is certain, however, is that like the Gaza settlers, like my father, like me, my children will do their best to indoctrinate the next generation with their particular dogma. And so it goes.