Some Iraq warriors insist women's rights can wait until later, but democracy and development flourish when women are treated as equals. 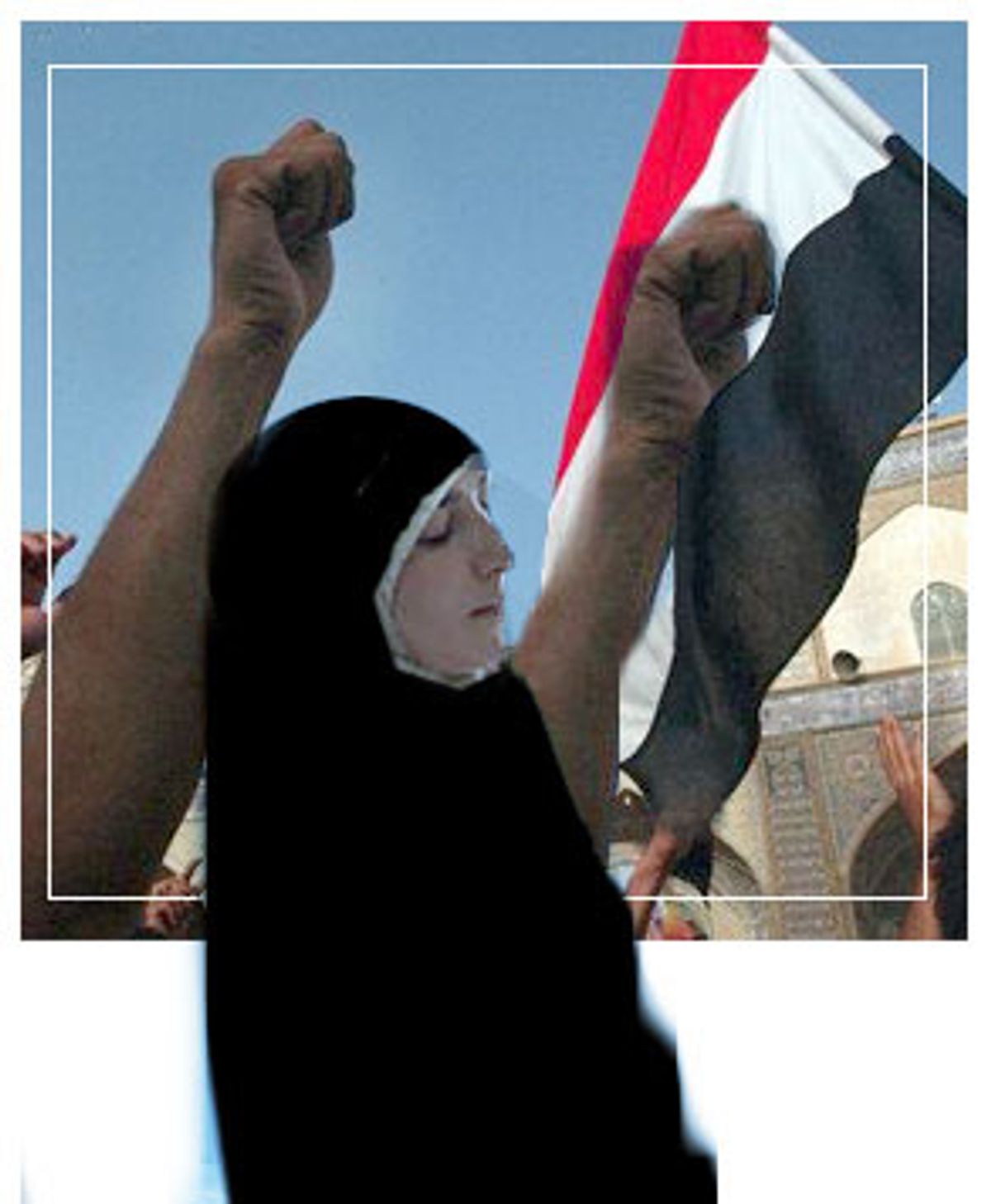 Commenting last week on Iraq's drafting of its constitution, President Bush hailed it as "an amazing process" that "honor's women's rights, the rights of minorities." But whether Iraqi women will achieve full participation in Iraqi society in the ultimate version of their country's contentious draft constitution remains very much in question.

That Iraqi women's rights matter should not be in question. Yet on "Meet the Press" recently, Reuel Marc Gerecht, a former CIA official, said that while he hoped the Iraqi constitution would protect women as much as possible, "women's social rights are not critical to the evolution of democracy." He added that 100 years ago, the United States was a democracy but women did not have the right to vote, and said, "If Iraqis could develop a democracy that resembled America in the 1900s, I think we'd all be thrilled."

The comment was in particularly bad taste, coming just before Women's Equality Day on Aug. 26, which celebrated the 85th anniversary of women's securing the right to vote in America. Lowering the bar for success in Iraq to America in the 1900s, when women and minorities suffered great inequality and discrimination, was an insult not only to the brave men and women who fought for social progress over the past century but also to the brave U.S. soldiers fighting today for a better Iraq, not to mention the women of Iraq.

Why "Meet the Press" thought Gerecht's views worthy of a prestigious national platform (now director of the Middle East Initiative at the Project for the New American Century, he left the mid-ranks of the CIA in 1994) can charitably be attributed to the difficulty of booking knowledgeable individuals in August in Washington. However, we can be thankful that President Bush and his administration so far have not dismissed the need to protect women's rights in Iraq.

Women's rights are in fact key to the evolution of democracy, as well as to long-term peace and stability. Although a direct correlation between increased rights for women and decreased conflict is hard to establish because so many other factors are involved, the trend is clear. United Nations Security Council Resolution 1325 (passed in October 2000) recognizes the important role women play in preventing conflict, encouraging reconciliation and helping to rebuild conflict-ridden societies. Countries that early on gave women the right to vote -- such as New Zealand (1893), Finland (1906) and Norway (1913) -- have been among the most stable democracies. What's more, the U.N. Development Program's groundbreaking Arab Human Development Report found that "society as a whole suffers when a huge proportion of its productive potential is stifled."

A democracy consists not only of the checks and balances against tyranny instituted by our Founding Fathers (but not Founding Mothers) but of the right of all citizens to decide the rules by which they intend to live. But women's equal rights alone do not ensure a democracy. For instance, in many former Soviet bloc countries, women had equal rights, but the population as a whole was denied access to decision-making processes. And while in most Arab countries (except Kuwait, Saudi Arabia and United Arab Emirates) women have the right to vote, in none of them do women enjoy equal rights or opportunities with men. As the UNDP report noted, the "utilization of Arab women's capabilities through political and economic participation remains the lowest in the world in quantitative terms, as evidenced by the very low share of women in parliaments, cabinets, and the work force, and in the trend toward the feminization of the unemployed." Thus, for democracy to succeed in Iraq, there must be both strong democratic institutions and full protection of the rights of women. In Iraq, both are now at risk.

For more than 40 years, Iraqi women have enjoyed a largely equal status with men, although both sexes were denied basic rights under the repressive regime of Saddam Hussein. The new draft constitution recognizes that equality. For instance, it states that all citizens, "male and female, have the right to participate in public matters and enjoy political rights, including the right to vote and run as candidates." Tribal customs that run contrary to human rights, such as honor killings, are forbidden. The document gives women new rights as well, including the right to pass on their citizenship to their children and a set-aside of 25 percent of parliamentary seats for women.

However, other provisions of the draft potentially provide opportunities for curtailing the rights of women. For instance, freedom of expression, freedom of the media and freedom of association and peaceful protest are only guaranteed by the state if they do not "violate public order and morality." A parliament dominated by religious extremists could use this loophole to restrict actions, particularly those of women they deem immoral.

Another provision allows Iraqis to choose whether they will follow secular law or sharia law in family matters, such as marriage, divorce and inheritance. What is not clear, however, is whether men will have the right to make that decision even if their wives and daughters disagree. The power of clerics on the courts is also unclear, especially with regard to their ability to push the adoption of Islamic law and negate the constitution's protections of religious freedom and the rights of women.

Bush's cheerful rhetoric about the progress toward democracy in Iraq notwithstanding, the country is in crisis, and the American people are increasingly questioning whether the cost to the U.S. -- almost 2,000 U.S. soldiers killed and $200 billion spent so far, with an estimated $300 billion by year's end -- of staying there is worth it. Indeed, President Bush's approval rating is at an all-time low of 36 percent. What's more, Iraq (which has lost an estimated 25,000 civilians) has become a new terrorist magnet and recruiting tool, and significant terrorist attacks worldwide have more than tripled.

In its drive to define a workable exit strategy, the Bush administration pushed hard for the tight timetable of developing a constitution by mid-August. But whether Sunnis will support the Oct. 15 referendum to ratify the constitution is very much in question, as is whether a new government will be elected as scheduled on Dec. 15. And the failure to garner the support of the minority Sunni population could well serve as a further catalyst for the insurgency. Estimated at 15,000 to 20,000 strong, with attacks averaging 70 a day, the insurgency shows no sign of abating.

A successful exit strategy depends on some form of respectable democracy and the establishment of a new Iraqi force capable of taking over security from U.S. forces. Yet, the goal of 270,000 trained security personnel is years away. As of June, fewer than 3,000 Iraqi troops had achieved the top readiness standard.

As the war in Iraq has demonstrated, America can certainly change the world, but it cannot bend it to its will. The world imagined by the Bush administration -- in which not only America's military power, but also its absolute authority over other countries' political and economic issues, shapes the world in America's interest -- has proved to be a dangerous myth. Rather, the only way America will succeed in defending its interests is through a more complex -- and often more frustrating -- balance of force and diplomacy that persuades allies to follow the United States.

Unfortunately, it is too late for the administration to undo the mistakes of the war in Iraq. Increasingly, the hard choices of what kind of postwar society Iraq will be have become -- and rightly so -- the prerogative of Iraqis. Only time will tell if their choices ultimately reflect America's values, including the full participation of women in society. But it remains the job of the United States to continue to strive for that goal, both for Iraqis and for Americans who are sacrificing blood and treasure for that very hope.

Nancy Soderberg, a senior official in the Clinton administration, is the author of "The Superpower Myth: The Use and Misuse of American Might."