This shiny sequel is cheap, nonsensical and obscenely enjoyable. 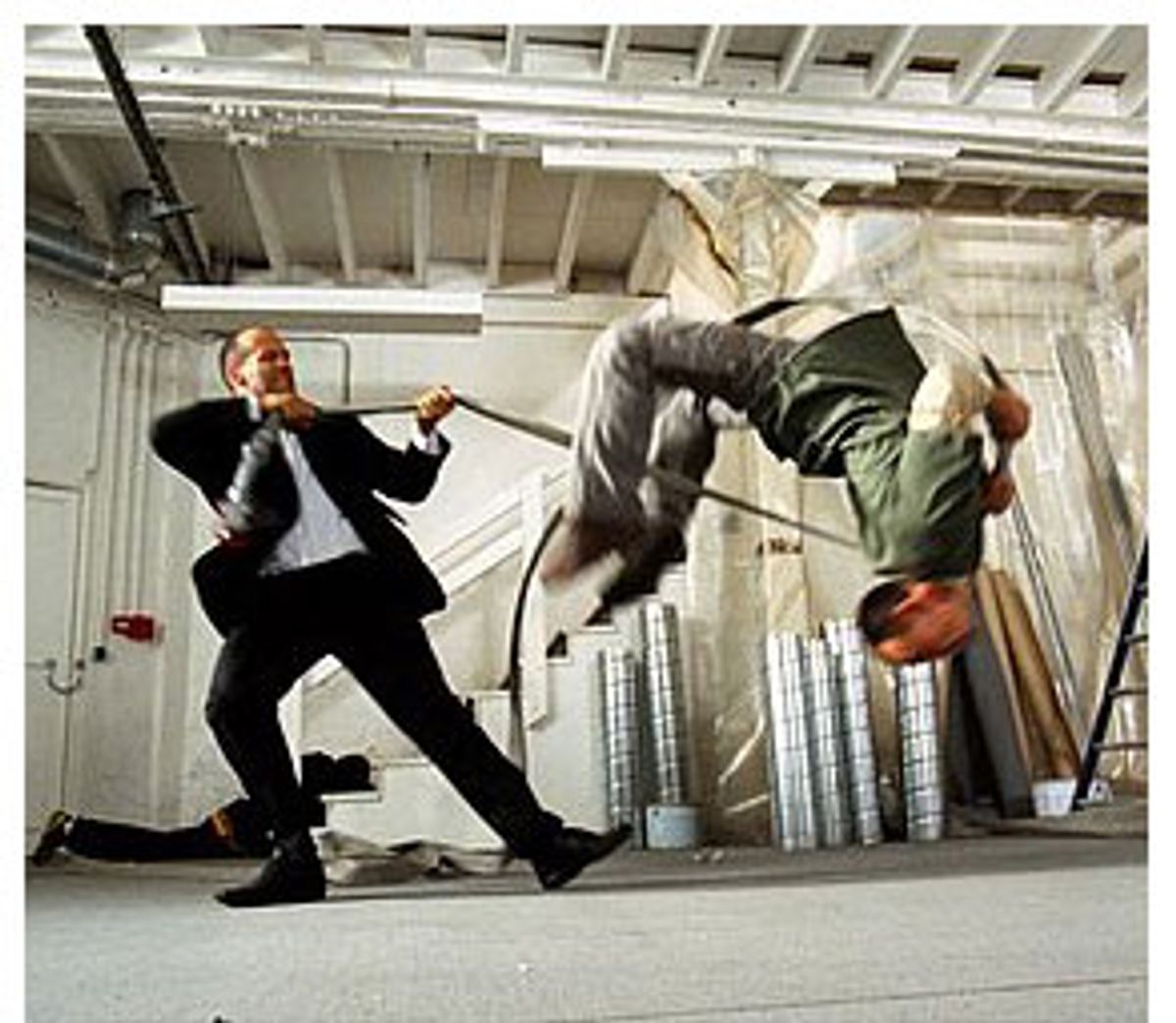 Louis Leterrier's "Transporter 2" is cheap, shiny, indefensible junk, a Hot Wheels hot rod encased in a glossy plastic blister pack. But come on -- you know you want it. This is the sequel to the ludicrously entertaining, equally junky 2002 "The Transporter," in which English diving champ and hunk of manhood Jason Statham played driver-for-hire Frank Martin, a guy who, for the right price, will shuffle anything or anyone from point A to point B in his beloved BMW, no questions asked. Statham is back in "Transporter 2," and he's as scruffily elegant and appealing as he was in the first picture. He has a profile that wouldn't be out of place in a Venetian palazzo, but he's also the sort of guy you'd meet down at the pub -- there's something comfortingly regular about him. Statham doesn't overdo the soulful rebel routine, but even so, his demeanor glows with integrity: Just by the way he squints, you know he's got principles.

In "The Transporter," Frank had the honor of squiring the lovely Shu Qi around the French Mediterranean -- OK, part of the time she was locked in his trunk inside a duffel bag, but in the end, he did right by her. In "Transporter 2," he's relocated to Miami and, as a favor to a friend, has taken the absurdly tame job of shuttling 6-year-old rich kid Jack Billings (Hunter Clary) to and from school. Jack's parents are always fighting -- they're played by cranky, stern-lipped Matthew Modine and a capable-yet-vulnerable Amber Valletta, a model-turned-actress who, in her few movie roles, always comes off as a real person -- and sensitive Frank tries to shield Jack as best he can from the domestic unrest. He's fond of the kid and, without socking us with an air-freshener blast of sentimentality, promises he'll never let anyone hurt him.

But wait -- did someone say "kidnappers"? It turns out a couple of baddies (Alessandro Gassman, son of Vittorio, with a set of jigsaw teeth that look like they've never seen the pointy end of a dentist's scaler, and 10-foot-tall -- make that 20 -- newcomer Katie Nauta, who looks like a Valkyrie reimagined by Patrick Nagel) are scheming to snatch the kid. To get him back, Frank has to do lots of kickboxing, whacking of thugs with assorted pipes and other large, heavy objects, and, most thrilling of all, really fast driving.

Frank was born to drive (even Statham's bullet-shaped head seems aerodynamically designed for maximum speed) and "Transporter 2" gives us lots of roadway craziness. Frank's vehicle is a sleek, bulletproof carapace on wheels, zipping down highways and quiet streets alike, always with chaos immediately behind, usually in the form of some cretin with an enormous automatic weapon. More than once, the Frankmobile takes flight, soaring over roofs and past palm trees -- kind of like "Chitty Chitty Bang Bang" for the action crowd. When Frank isn't driving, he's facing off against multiple thugs at once (usually no fewer than four), using whatever's handy to trip them up (at one point, he grabs a fire hose and slings it around like a lasso). "Transporter 2" has all the usual bone-cracking and head-butting, but the violence is also fleeting and indirect -- instead of fixating on the brutality, Leterrier does his best to keep it breezy and cartoonish. The martial-arts sequences here were choreographed by Corey Yuen (the director of "The Transporter"; Leterrier was credited as "artistic director" on that film), and they have a suitable degree of style and snap.

Action pictures need visual dazzle, and this one doesn't always look as pretty as it should: The colors have a grainy, washed-out look in some places, and you want a slick fantasy like this one to at least aspire to look classy. Still, we do get some interesting tight close-ups of Valletta and Statham: On the big screen, Valletta's freckles resemble golden dimes, and every bristle on Statham's chin looks as if it has been lit individually. (The cinematography is by Mitchell Amundsen.)

There are other problems with "Transporter 2": The wonderful French actor François Berléand reprises the role of the small-town French detective he played in the first movie, but he doesn't have nearly enough screen time here. (He's the only actor I can think of who can almost carry off the sandals-with-socks look; then again, he is French.) Oh, and one more thing: The plot of "Transporter 2" makes almost no sense, and wraps up rather stupidly by ripping off "Goldfinger." But if you've come to "Transporter 2" looking for logic, you've come to the wrong place. That a movie can run on empty and still be so obscenely enjoyable is a pretty slick stunt in itself.