The author of "Jimmy Corrigan" explores a fallen world in this new installment of breathtakingly intricate comic strips. 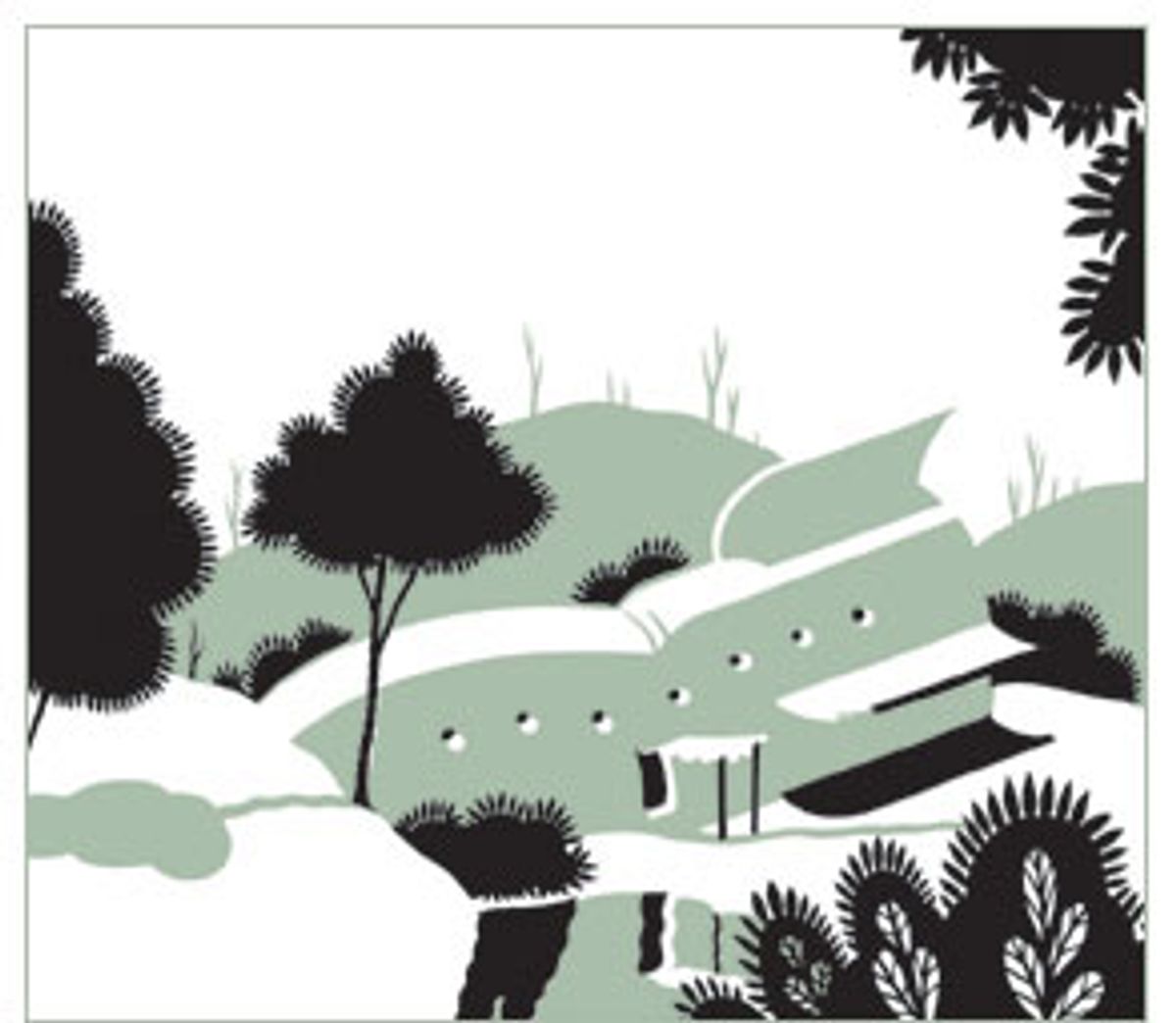 F.C. Ware draws as if he would instantly die if anyone accused him of cutting corners. His first graphic novel, 2000's "Jimmy Corrigan, the Smartest Kid on Earth" -- published under the name Chris Ware, which he still uses for his weekly strip in the Chicago Reader -- was a brilliant and exhausting book: a history of a family's pathetic fantasies and painful realities, rendered in a style whose maniacally precise, composed, geometrical frostiness counterbalanced the story's emotional brutality. He followed it up with "Quimby the Mouse," a collection of earlier strips, and "The Acme Novelty Datebook," a hefty selection from his remarkable sketchbook. In the meantime, he's been serializing two extended narratives, "Rusty Brown" and "Building Stories," over the past few years.

Ware's new book, which bears the unwieldy title "The Acme Novelty Library Final Report to Shareholders and Rainy Day Saturday Afternoon Fun Book," isn't quite his long-awaited second graphic novel either. Instead, as Ware explains in an "Apology and Souvenir Comic 'Strip'" on the inside of the paper band wrapped around the "Final Report's" cover, it's mostly a set of one-page "gag strips" he's done as a diversion from his longer stories. "When I drew these strips," he writes, "I was still so deeply dubious of my ability to do 'emotionally resonant' comics that I had to occasionally return to a 'joke' format just so I was able to find the confidence to keep going in a more 'serious' direction."

The apology's a little disingenuous, given the gobsmacking level of craft on display here. Start with the cover: a gilt-embossed design that features "the world's smallest comic strip," 110 tiny panels about love, death and heartbreak, printed not on the front or back cover -- or even the spine -- but the edge of the hard cover itself. Turn the first few pages -- past a series of ingeniously vicious parodies of old comic books' ads for Grit and Charles Atlas -- and you'll hit a spectacular two-page map of the heavens and the traditional constellations, à la Ware. View it in the dark, and it becomes an entirely different celestial map -- the constellations this time are Ware's characters, printed in glow-in-the-dark ink. That's followed by a brief history of visual art (presented as a series of tiny newspaper-style comic strips), then another grand two-page scheme described as "Our Blueprint of the Universe, as Seen through its Four Physical Types, Principles, and the Opposing Forces of Nature."

It's staggering -- the sort of work that would singlehandedly establish another artist's career -- and Ware's only started showing off. The centerpiece of "The Acme Novelty Library" is a long, wordless story about the pudgy, masked, omnipotent character that Ware sometimes calls "God" or "Superman" in his comics. (He's not named here, and the story isn't mentioned in the otherwise detailed table of contents.) It occupies 12 pages in the middle of the book, and fragments of other pages. Near the story's end, the character is in a prison cell, scraping little drawings onto the cinder blocks with a nail. Then Ware pulls back, so we can see hundreds of stick figures on the wall. If you're willing to stare at the panel hard and long enough to risk eye damage, you'll see that he's drawn a microscopic stick-figure version of the entire story up to that point. We are not worthy.

The recurring one-page comic strips that fill most of the rest of the book are more or less in the manner of Sunday color newspaper comics, back in the days when each strip occupied an entire tabloid page. Most of them have a simple, cruel premise. "Big Tex" is a dimwitted comedy cowboy character whose father despises and tortures him; in "Tales of Tomorrow," a pudgy man of the future, wearing a '50s-style space outfit, spends his life alone in front of a TV set that keeps trying to sell him things, as he sucks food from a tube in the wall.

The nastiest of Ware's gibes are reserved for his "Rusty Brown and Chalky White" strips -- possibly outtakes from the forthcoming graphic novel. Rusty and Chalky are childhood friends, social outcasts who bond over collectibles and action figures (a world with which Ware seems painfully familiar). As they grow older, Rusty makes collecting his life, to the exclusion of human contact and hygiene; Chalky gets married, has a daughter who grows to despise him, drifts into simple-minded Christianity, and mostly puts aside the childish things that his old friend still fanatically covets. In a typical sequence, Rusty, at a flea market, buys the "Colonial Warrior in VG or VG+ condition with cloth vest" that Chalky's been looking for, briefly fantasizes about the woman who sells it to him, hears her say that her boyfriend "found it in a dumpster last week," and goes outside and stomps on it: "FUCK YOU! You can't have it! I won't let you have it! Fuck YOU Chalky White!"

This is a "'joke' format"? What's most obviously missing from Ware's "gag strips" are gags -- they have all the bitterness of pitch-black comedy without the actual comedy, and the playful visual style of his favorite old newspaper strips without their sense of fun. They're always impressively constructed, but Ware always plays his form against his content in precisely the same way: Hey, kids! Torment!

"It's just punchlines," Ware draws himself explaining in his "Apology." "I don't trust them ... They don't exist in the real world, so why should I accommodate them in ART?" That's a specious argument: perfectly geometrical forms don't exist in nature either, but that doesn't stop Ware from constructing most of his "finished" work from them. In fact, one reason why Ware's comics often seem so frigid is that the vulnerability and liveliness of the sketchbook drawings seen in "The Acme Novelty Datebook" are ruthlessly boiled out of them until they conform to the clean-lined symmetry he considers iconic. It works for his purposes -- he can convey a mountain of information with two or three lines -- but his version of "iconic" often suggests the sneering remoteness of "ironic."

Ware's a formalist and a historian: not a single element of his book's design has been taken for granted or left untweaked (even its Library of Congress information is the occasion for an extended riff in tiny type). Every line he draws carries behind it the weight of his ideas about comics and their history. In a tiny "Ripley's Believe It Or Not!"-style box, he explains that "cartooning is not really DRAWING at all, but a complicated pictographic language intended to be READ, not really SEEN! ALSO, its strongest roots are NOT in the Academic tradition, but in an arcane system of 19th century PHYSIOGNOMY and RACIAL CARICATURE!" He goes on to present a history of cartooning (in the form of 25 minuscule strips on a single page), beginning with a caveman having his head bashed in as he makes a tiny dirty drawing on a cave wall, and touching on significant early figures like proto-cartoonist Rodolphe Töpffer and publisher William Randolph Hearst, and also taking a few red-clawed swipes at modern "Cheerleaders for the Cause": "I think they're wonderful, because they get people interested in REAL reading!"

Ware's also an incorrigible nostalgic -- one of his favorite topics is the decline of the sort of personal craft he pours into everything his pen touches. A tiny strip called "The Letterer in 'Final Insult'" shows a retired widower who was once a hand-letterer buying a bag of chips marked "New Look -- Same Great Taste!" and realizing that the last vestige of his work has been "usurped by digital vector graphics, bitmap brickwork, and insolent little computer hobbyists who don't know a goddamned thing about ascenders and descenders." Then he goes home and stuffs himself with chips, sitting in front of the TV. The title panel, naturally, shows him as a young man at his easel, tipping his visor and grinning.

Ware's world is a fallen world, and his contribution to the struggle against the void is aestheticism and decoration. In one strip, a father has a screaming fight with his wife, drags their son outside for a babbling lecture about fall colors and "the glory of NATURE in all its wondrous BOUNTY," then breaks down coughing and sobbing. We see the scene from overhead, through branches and delicately hued leaves that really are as gorgeous as the father's describing.

Still, Ware can't get away from the idea of the artificial pleasures of childhood for even a few pages at a time. The "Rainy Day Saturday Afternoon Fun Book" in the new volume's title isn't entirely sarcastic -- there are cut-out-and-assemble booklets (along with a little cabinet to put them on), a "picture scroll," and a "magic moving picture theatre" to put together. (This last is listed on a "Project Page" along with "Birth Control Fashioned from the Leavings of the Weekly Slaughter" and "A Profitable Office Building.")

Ware clearly despises Rusty Brown for lusting after a collectible "Looney Lemon" figurine to complete his set of Pillsbury premiums, but he draws the vintage toys with the genuine tenderness of someone who's bought more than a few himself. And in the title panels of the "Rusty" strips, he often draws Rusty himself as a cheerful-looking toy character. It's hard to think of any other artist, in any medium, who's both so obsessed with whimsy and entertainment and so teeth-grittingly resistant to pleasure in his own work. Ware's mastery of his form and style just makes his hammering at a single note of despair as frustrating as it is compelling.