The rules of attraction

The women in Candace Bushnell's new novel are rich, smart, hardworking lovelies. So why do they need men to dominate them? 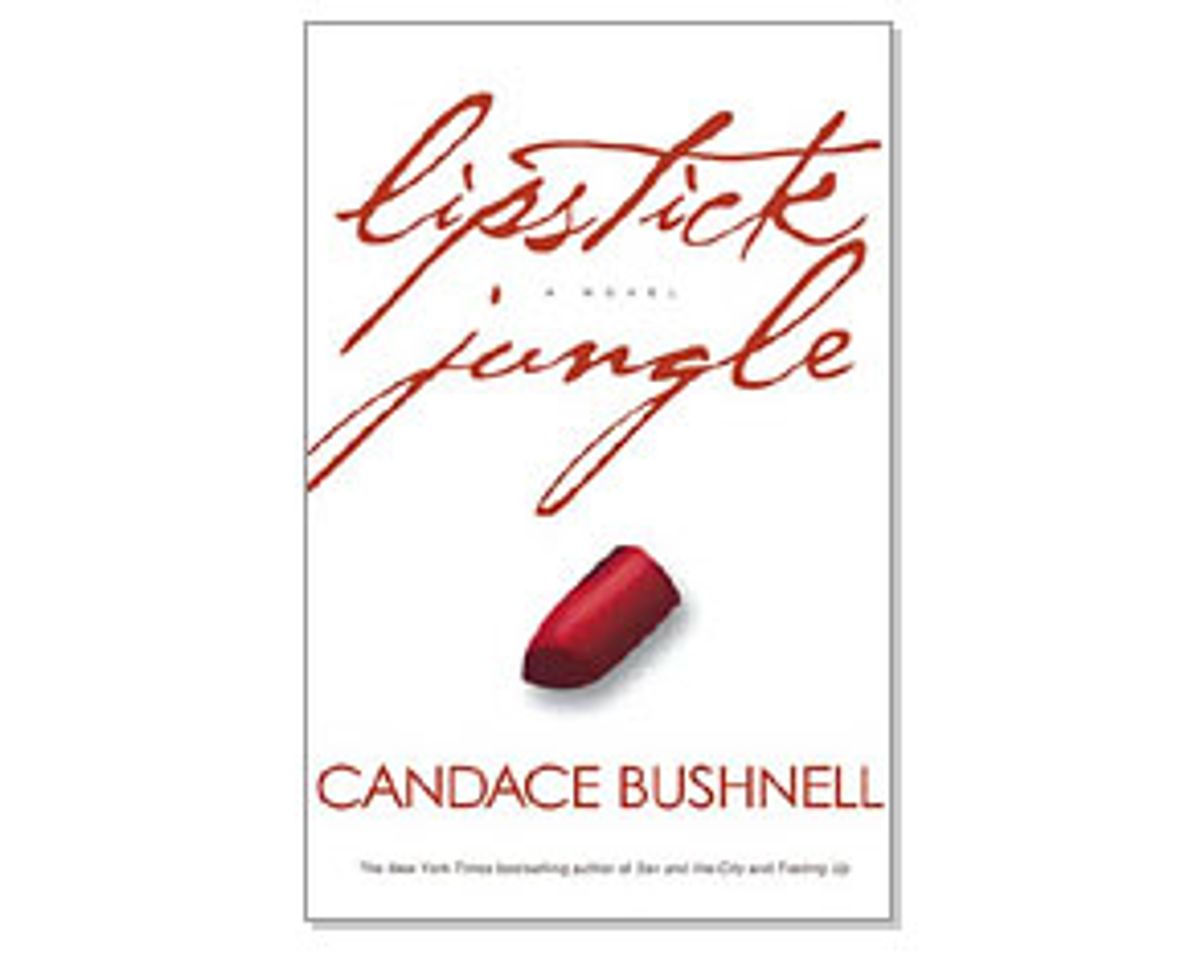 "What is it with S/M? Since I got divorced, every woman I've dated has wanted me to tie her up or spank her. Is it something about me or is this what women want these days?" My friend Bill is a cultivated, mild-mannered blazer and khaki pants kind of guy in his late 40s, and his girlfriends tend to be 30-ish bankers or lawyers as buttoned-down and Upper East Side-looking as he is. I understood Bill's confusion, but I tried to explain.

Almost any woman Bill would date in New York would be up for some highly stylized submission. These women are tired of androgyny, sick of men who treat them like pals. And they want to feel the boot occasionally. The wish to be dominated doesn't extend to important stuff, however, like choosing restaurants and movies. As my friend John says, American women want to be "forced" to do the things they already want to do. It's sexy to be tied up and kissed, but boring to be dragged along for an afternoon of auto parts shopping.

Candace Bushnell's new novel, "Lipstick Jungle," is set in this landscape of female progress and disillusionment, where the question of the moment is how a woman can feel sexy even if she far out-earns her husband. After all, in a culture where masculine sex appeal is equated with high earnings, a woman who is more successful than almost all men is desexed. For Victory, the one single character, this pretzels into a question of ego when she dates a man whose wealth dwarfs hers: "How can I be a successful woman when I'm with an even more successful man?" And so, because Bushnell's three fortysomething heroines are the sort of Manhattanites who haven't been in the subway in years, buy private jet shares, and lunch at Michaels, they're also the sort who want to be dominated in bed. "All she could think about was Kirby and that glorious feeling of being overcome," Nico O'Reilly muses in the opening scene of "Lipstick Jungle." Nico (supposedly modeled on Anna Wintour) has an even-keeled, practical partnership with her banker-turned-househusband Seymour. She loves him and their daughter and prizes their smooth life together, but at 42 she hasn't had sex with Seymour for three years.

For Seymour -- as for the stereotypical corporate wife he's modeled on, down to his expertise on early American antiques and interest in showing purebred dogs -- sex is far down on the list of enjoyable activities. So Nico falls into the arms of pantyhose-cutting Kirby Atwood, a verbally challenged underwear model with nothing to do all day but make love. (If I wore pantyhose, maybe I'd think a guy named Kirby sounded hot, but to a downtown gal like me, "Kirby" is a nice name for a cat.)

Nico's pal Wendy Healy, 44, is a high-earning film producer who has supported her shiftless, vain wannabe director husband Shane for all of their marriage. Eventually Shane asks for a divorce and tries to milk Wendy for all she's worth -- and get custody of the kids. Not that they're any prize; rarely has fiction shown us such authentically charmless upper-caste Manhattan children. I like to imagine that Bushnell, who is childless, took some pleasure in crafting the scene where Wendy's 6-year-old son punches her in the face. And in this novel of role reversals, of course Wendy wouldn't dream of spanking him.

Eventually Wendy finds happiness in the arms of her erstwhile competitor Selden Rose, who appeared in Bushnell's last novel,"Trading Up," as the exploited husband of Bushnell's main character Janey (herself first introduced in Bushnell's "Four Blondes") and is a lonely divorced guy in "Lipstick Jungle." (Since I reviewed "Four Blondes" and came to the conclusion that Candace Bushnell is not Jane Austen, I didn't feel obligated to read "Trading Up," so I cribbed that detail from Amazon.) The details of Selden and Wendy's sex life is left to the imagination, but perhaps their clothes enact a drama of submission and dominance, for we're told that Selden's "tailored navy suit, worn with an open, white dress shirt, screamed casual power."

The third relationship option Bushnell portrays is the one we're meant to root for. Plucky, outspoken and refreshingly reckless fashion designer Victory Ford ends up with a strapping, hypercompetitive, just this side of manic billionaire named Lyne Bennett. He's the only manly man in the book, despite his epicene name. (And what about "Selden Rose"? What's up with Bushnell's penchant for naming her male characters like law firms? Law firms without any Jews, too. Then again, Lyne's surname might be a gender-bending allusion to "Pride and Prejudice's" heroine Elizabeth Bennett.)

Bushnell is also discreet about Lyne's sexual prowess; when she discusses men with big jobs like Bennett and Rose, she's bashful, almost as though she were forgetting that they're all fictional characters and aren't going to use their influence to get back at her! But Lyne has the potential for domination, as Victory realizes: "Even in her heels, he was at least six inches taller than she was, so she couldn't exactly protest physically." Lyne is only pulling Victory into the Whitney Biennial opening, but you get the idea.

If I had a daughter (the kind who wouldn't punch me in the face) I wouldn't want her taking Candace Bushnell characters as role models. The women of "Lipstick Jungle" are much smarter and more appealing than the women of "Four Blondes" -- they love their work and not only the rewards of it -- but they are still too one-dimensional. They're the kind of girls who don't have interests, only goals.

But better them than the hapless, passive heroines of more skilled writers like Ann Beattie, Tama Janowitz and Melissa Bank, characters who depend on men not only for their emotional well-being but for their jobs and their rent. "It's so easy to solve your problems when you're a successful woman and you have your own money," Wendy tells Nico near the end of the book, and she's right, at least about many of the problems female characters face in chick lit. And I was ready to forgive Bushnell her tin ear when she has Victory Ford pick up the $1,000 check for her first date with Lyne at Cipriani, just to show him that she's not interested in him for his money. It might be the first time I've read such a scene in a novel: I only wish it would happen more in real life. And I liked it even better when Lyne responds to Victory's accusation that "the person who has the most money in the relationship has the control," with, "That may be, but if they're a decent person, they never let the other person know."

A few pages later maturity rears its head again: Wendy and Selden -- whose workplace rivalry has been gradually softening into friendship, at Selden's initiative -- run into each other at the Mercer Hotel at 9 a.m. on a Sunday. She admits that she's had to move out of her loft due to her divorce, and he makes a startling admission. His second marriage, to a supermodel (Janey from "Four Blondes"), failed because "I let my ego overrule my common sense." Wendy wonders if Selden is "really that decent." There's that word "decent" again -- could Bushnell be mellowing in her middle age? (And would any man ever admit that his ego had overruled his common sense?)

[Note: If you don't want to know how things turn out for the characters in "Lipstick Jungle," stop reading now.]

By the end of "Lipstick Jungle," decency and maturity are epidemic. (A lucky thing too, because after almost 400 pages the reader will have tired of Bushnell's leaden, clumsy prose and malapropisms. "Four Blondes" had a certain brisk facility, but the editing here is much worse.) Nico has decided that the fact that "she and Seymour really, really liked each other and always had" is "a lot more important than lust." She lets Kirby down gently, with a $5,000 check that breaks a bigger taboo than Victory's picking up the tab at Cipriani. Wendy goes through an amicable divorce and Selden is about to move in with her. She resolves to treat Shane well, after hearing him explode that "when a woman gives up her career to take care of her kids, she's a hero, and when a man does it, all you women think there's something wrong with him." "She was so much more powerful than he was ... She must be benign." And Victory is finally able to be vulnerable after the biggest, and self-administered, setback of her business career. She and Lyne Bennett go off shopping into the sunset together.

At the novel's close, Bushnell's clever but diagrammatic gender role reversals have finally brought her and her characters to a plane of real feeling and humanity never glimpsed in her earlier writing, a place beyond the power dynamics of S/M and gold digging alike. Somehow her three women have moved past the dilemma posed by Wendy early in the book, when she contemplates the myth she purveys in her romantic films:

"The rules were rigid: a high-status man falls in love with a lower-status, but worthy and deserving, woman. Fifty years of feminism and education and success had done little to eradicate the power of this myth, and there were times when the fact that she was selling this bullshit to women made Wendy feel uneasy. But what choice did she have? ... How many women would eagerly sign up for the opposite: high status woman ... falls in love with lower-status male ... and ends up taking care of him?"

Bushnell is an intuitive rather than an analytical writer, and it isn't clear how she thinks the issue can be resolved, how powerful women can find beta males sexy. The mood of the ending is better than the circumstances might suggest: Nico gives up on eroticism for companionship, and Wendy finds a nicer and less superficial version of Shane in Selden. In the closing scenes, Wendy has announced that she's pregnant with Selden's baby, and Nico hopes that Selden will continue working even after the child is born, "at least for a little while. Imagine having to support two men and four children!" The only duo where the sex seems hot is the most conventional partnership, tall, rich Lyne and madcap Victory.

But you don't pick up a Candace Bushnell novel for the logic. What Bushnell does so well is to get just the slightest bit ahead of the curve. Just as her "Sex and the City" girls are more common now than they were in the days of her New York Observer columns, so the coarse, energetic woman tycoons of "Lipstick Jungle" might be signposts for the years ahead. I'd welcome the change. And men who date ambitious women might have to resign themselves to a more strenuous sex life -- or at least to clothes that "scream casual power."