Barbara Ehrenreich set out to write a "Nickel and Dimed" for the white-collar worker -- but everything fell apart when she couldn't nab a corporate job. 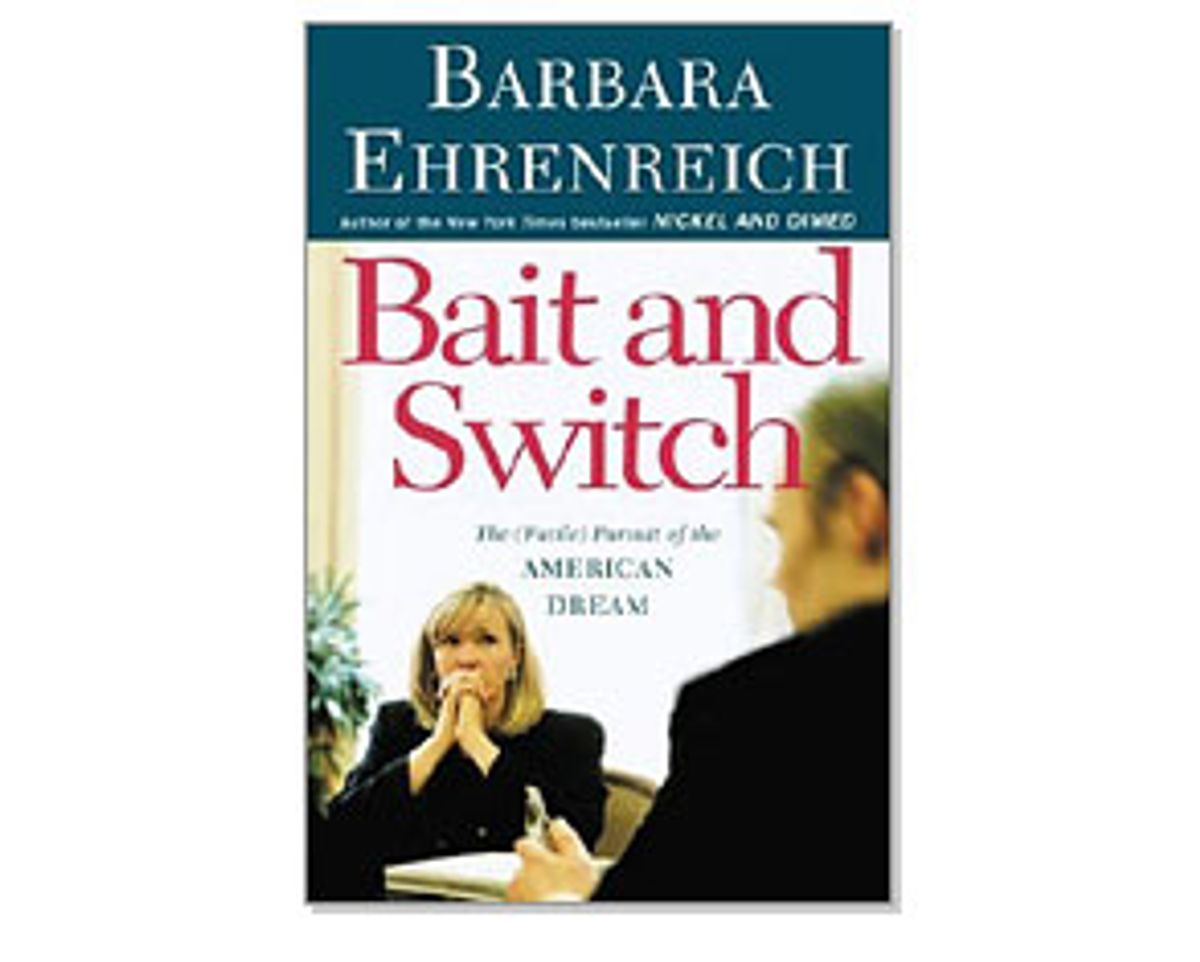 Four years ago, with the widely acclaimed "Nickel and Dimed," Barbara Ehrenreich demonstrated that while working for minimum wage is no way to make a decent living in America, writing about it can be. Between the hardcover and paperback editions, her account of stints working at a breakfast diner, a Wal-Mart and a housecleaning service spent more than 100 weeks on the New York Times bestseller list. Now Ehrenreich has produced a sequel: "Bait and Switch: The (Futile) Pursuit of the American Dream."

This time, instead of bottom-of-the-barrel service work, Ehrenreich has volunteered for a stretch of white-collar unemployment. Her catalogue of labor-market misery, as she explains in the introduction, seemed incomplete without a section devoted to the people who have followed all the rules and still lost -- people, such as one letter writer she cites, "who didn't have babies in high school, who made good grades, who work hard and don't kiss a lot of ass and instead of getting promoted or paid fairly must regress to working for $7/hr." So after setting some ground rules -- she can't use her reputation and connections, and she must go anywhere and take any job no matter how dull or morally dubious -- Ehrenreich reverts to her maiden name, Alexander, cooks up a résumé full of legitimate skills and phony experience, and goes hunting for a public relations job.

In what passes for the book's action, Barbara Alexander conducts fruitless Web searches and endures perky and unhinged career coaches -- one of whom uses a plastic Elvis doll to illustrate his points. She attends an "executive boot camp" where a middle-aged man instructs the campers to blame themselves for everything, she gets a style makeover from the obligatory gay consultant, and she encounters evangelical testimonials where she had expected to find networking sessions. Although she originally planned to spend half a year searching and another half working wherever she landed, Ehrenreich never finds a job.

The self-as-case-study method worked well enough for "Nickel and Dimed" -- yielding a visceral account of the humiliations and deprivations of low-wage work that no amount of secondhand reporting might have matched -- but in "Bait and Switch" it feels like a stunt. In "Nickel and Dimed," Ehrenreich's experiences in retail work could easily be viewed as representative; here her plight is almost entirely contingent on the artificiality of her situation. Slipping into corporate America after spending more than a decade as one if its foremost critics is not the same straightforward project as landing a job at a Denny's, a fact that Ehrenreich fails to acknowledge in anything but a cursory way. (Not to mention that she breaks her own rule and, "in a rare moment of moral lucidity," decides not to follow up on a promising contact at a military contractor because of its alleged involvement with the torture of prisoners at Abu Ghraib.)

But why try to put herself in the story at all? Most of her best material comes from encounters with other jobseekers and from the considerable literature on the subject. It's a fair guess that if Ehrenreich had known she wouldn't find a job, she wouldn't have written the book this way, but as it is, the reader is left to wonder who is driving the ship: Ehrenreich the reporter or Alexander the applicant. This question is particularly pressing when, for instance, Ehrenreich decides to go back to the executive boot camp counselor and convince him that he needs her P.R. services, that his marketing video and public speaking need her refining. After he makes a few lame excuses for himself, Ehrenreich makes a confession:

"I want to save him. I also -- where is this coming from? -- want to push him down deeper into the enveloping muck. 'Listen to yourself,' I say, leaning forward, 'how your voice falls when you say that. What I'm picking up on here is depression.'"

Is Ehrenreich thinking that this will help her land a job, or that it will make a good scene in her book? A couple of pages later, when the pitiable man turns her down and, rather perceptively, tells her that she seems angry, Ehrenreich is somehow surprised:

"I am taken aback. I don't feel any anger toward Patrick -- pity, of course, and a certain contempt for his entire profession. If I'm guilty of anything here, it is an excess of that vaunted corporate quality -- focus."

It was her laser focus, no doubt, that made her want to drown the guy in the "enveloping muck." On the next page, Ehrenreich further confuses the matter by admitting that she knew before entering his office that there was no job to be had. By this point, it's anybody's guess why we, and Patrick, are being dragged through this.

Still, it's a shame that the premise of "Bait and Switch" is rickety and the action dull when the analysis is mostly on target. The simple explanation for Ehrenreich's failure to find work is that her corporate persona is a poor candidate for a mid-level P.R. position, but her claim that the political influence of big business and an increasingly cutthroat corporate culture have eroded the stability and comfort of the middle class is no less valid for that.

Nor, for that matter, is the thorough demolition of the pseudoscientific logic behind self-help literature she performs along the way. Here is her treatment of Bruce Doyle's "Before You Think Another Thought":

"How do you make your dreams come true? Simply by beaming them out from your mind. 'Scientifically,' Doyle asserts -- and it hard to think of a setting in which that adverb has been more flagrantly abused -- 'one might say that focusing your attention on the energy field of consciousness, which contains the waves of all possibilities, creates the particles (events and materializations) that you experience as your reality.'"

While it's an obvious point that the particles of Doyle's reality materialized out of his ass, Ehrenreich shows why this type of effluent is particularly noxious:

"It's not the world that needs changing, is the message, it's you. No need, then, to band together to work for a saner economy or a more human-friendly corporate environment or to band together at all."

The meat of her argument, however (as Ehrenreich demonstrated recently in the New York Times), could have been packed into a short essay without losing much. The entire book for that matter -- trimmed of its considerable fat -- would fit nicely into the pages of a magazine.

Ehrenreich concludes "Bait and Switch" -- almost exactly as she did "Nickel and Dimed" -- with an exhortation to the kind of collective action that self-help books tend to undermine. America's 8 million unemployed, she suggests, represent a vast, untapped political resource. Since they have extra time on their hands, they could organize into a powerful lobby for universal healthcare, expanded unemployment benefits and secure retirement plans. (Customers who buy this heartwarming tale might also enjoy "Stone Soup" and another Howard Dean presidential run.) Eight million is a formidable number to be sure, and Ehrenreich wants the right things, but her gauge on her audience is seriously damaged.

For a reporter intent on experiencing what it means to be down and out, Ehrenreich has a curious knack for rhetoric sure to alienate working stiffs. She suffers a bad case of NPR syndrome -- a disease characterized by a tin ear for humor and by glib, sanctimonious posturing. In a passage symptomatic of the illness, Ehrenreich relates how, when an "older African-American woman and a light-skinned young man" invite her to sit with them on a couch in the hall outside a stagnant job fair, she ventures a wisecrack and everyone breaks out laughing: "I laugh too, and for some reason we can't stop laughing, pressed thigh-to-thigh there on the invisible outer border of corporate America." Wherever those two jobseekers are now, it's hard to imagine they are indulging in fond memories of being pressed thigh-to-thigh with that nice white lady.

As a confirmed atheist, Ehrenreich tends to be at her snooty worst in the presence of piety. "Bait and Switch" includes a chapter filled with cheap shots and armchair theological commentary on her experiences at evangelical job-search ministries. A gathering she attends at a church in Washington, D.C., she notes, begins with a prayer of gratitude to God "for being a great provider." "An odd reason for gratitude," Ehrenreich quips, "given the circumstances." Later, when a taxi driver in Atlanta divulges that he hopes to become a Pentecostal preacher, she professes her unbelief:

"'It's too hard to be a Christian,' I explain. 'Jesus said that as soon as you get any money, you have to sell all you have and give it to the poor.' 'Where does it say that?' he asks, genuinely curious."

These gratuitous swipes at believers are a cliché every bit as unhelpful as "the power of positive thinking." Here again the shame is that, buried as it is in disdain and aggression, her point is fair: Too often the influence between corporate and Christian culture flows in the wrong direction.

"But then what to make of the growing Christianization of business?" she asks. "Will it lead to a kinder, gentler, more reflective business culture? Or is it religion that will have to change, becoming more like the grimly utilitarian McLean Bible Church -- a realm drained of all transcendence and beauty?"

Couched as an alarm from a concerned believer or as a notice from a dispassionate observer, this question might stir thought among those in a place to do something about it. But coming as a taunt from a self-righteous disbeliever, it, like the rest of "Bait and Switch," will serve mainly to reassure Ehrenreich's fellow travelers.

If you count yourself among them, "Bait and Switch" will feel like a warm bath. If, however, it comes as news to you that "career coach" is not a real job; that self-help books tend to benefit their authors more than anyone else; that the only "networking" deserving of the word is done by fishermen; that corporate culture in general is diseased; and that the free market is not, in fact, an infallible force of justice, then "Bait and Switch" will strike you as so outrageous you'll probably just skip it. As for the rest of us, we might have expected more substance from Ehrenreich.