Ideologically opposed to a strong federal role in disaster relief and obsessed with terrorism, the Bush administration let a once-admired agency fall apart. 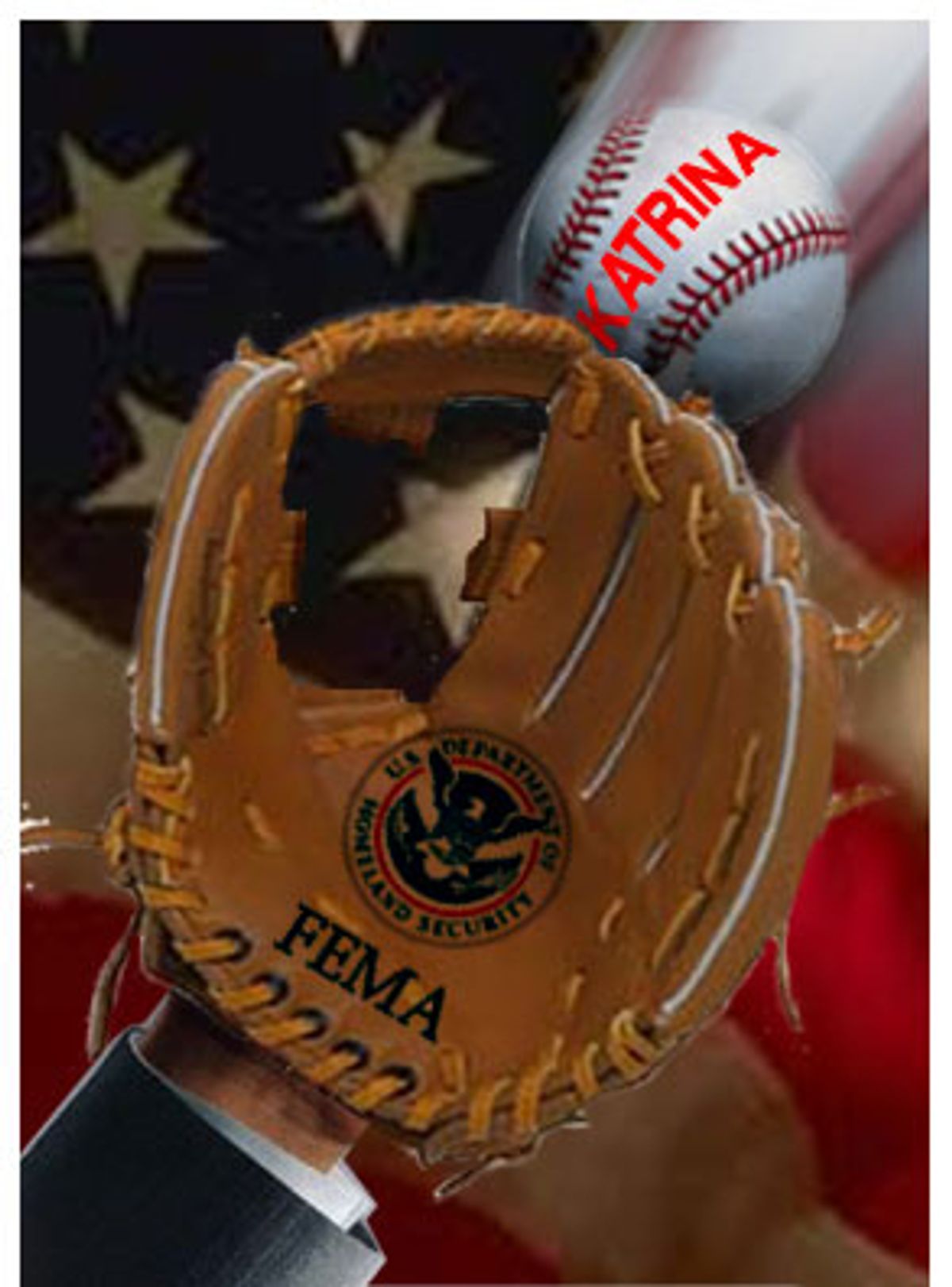 Days before Hurricane Katrina struck the Gulf Coast, the city of Chicago drew up a list of resources it was willing to make available for relief efforts in areas that might be hit by the storm. Chicago told the Federal Emergency Management Agency that in the event of disaster, it could spare more than 100 Chicago police officers, 36 Fire Department personnel, eight emergency medical experts, more than 130 staff from Chicago's Department of Public Health, 140 staff from the Department of Streets & Sanitation, dozens of trucks and two boats. These teams, Chicago Mayor Richard Daley told federal officials, could work in affected areas independently, bringing their own food, water and other supplies with them. But FEMA apparently wasn't interested. Despite the host of resources Chicago offered, and despite the televised lack of resources in New Orleans, as of late last week, FEMA had requested only one thing from Chicago -- a single tanker truck. "I was shocked," Daley said at a news conference on Friday. "We are ready to provide considerably more help than they have requested. We are just waiting for a call."

Daley wasn't the only generous donor to be rebuffed. Throughout last week, various local and state governments, corporations and nonprofit organizations across the nation attempted to help in the relief effort, only to be snubbed by federal officials -- officials who were themselves providing precious little aid to those in need. Citing security concerns, the Department of Homeland Security barred the American Red Cross from entering New Orleans with food. Five hundred Floridian airboaters were ready to rescue people stranded in inundated homes, but FEMA turned them down. Twenty sheriff's deputies from Loudoun County, Va., suffered a similar fate. And Aaron Broussard, the president of Jefferson Parish, La., said on "Meet the Press" on Sunday that FEMA declined to let him accept three tanker trucks of water donated by Wal-Mart, as well as 1,000 gallons of diesel fuel stored in a Coast Guard vessel docked in his district.

During the 1990s, FEMA was routinely praised as one of the best-functioning federal agencies. Its response to the Midwestern floods of 1993, the Northridge earthquake of 1994, and 1995's Oklahoma City terrorist attack are considered models of emergency response. By contrast, its performance during Katrina is almost universally acknowledged to have been abysmally poor. At first, FEMA's post-Katrina failure appears baffling: What happened to the once-great FEMA? But George Haddow, who served as the deputy chief of staff at FEMA under James Lee Witt, Bill Clinton's FEMA director, thinks that FEMA's current flaws are all too understandable -- and are a direct consequence of the Bush administration's decision to pull the federal government out of the natural disaster-relief business and turn over more power to state and local officials.

Indeed, the White House's new response to the political disaster prompted by Katrina -- one in which officials are attempting to blame authorities in Louisiana, rather than in Washington, for the slow aid -- underscores the Bush philosophy. According to Haddow, instead of working with local officials to try to minimize the impacts of an impending storm, the White House has decided its best strategy is to keep its distance from people on the ground. That way if anything goes wrong, the White House can "attack, attack, attack."

We began to see some of these attacks over the weekend. Sunday's Washington Post cited an anonymous Bush administration official who explained that one reason that the federal government didn't intervene more quickly in Louisiana was because Kathleen Blanco, the state's Democratic governor, failed to declare a state of emergency there, a necessary step for federal help to flow. An article in Newsweek repeats the same claim.

But there's a problem with the White House's excuse: It's patently false. As Josh Marshall points out, Blanco declared a state of emergency on Aug. 26 -- a day before Bush declared a federal emergency in Louisiana. (You can see Blanco's official declaration in PDF format here; the Washington Post has corrected its article.) On Aug. 28 -- the day before Katrina made landfall -- Blanco followed her declaration with an official letter (PDF) to Bush that requested all manner of emergency supplies her state would need for the aftermath.

Haddow says that these requests should have been enough -- more than enough -- to prompt a full-scale federal response. Under the Clinton administration's FEMA, with Witt as the head, a storm of Katrina's magnitude would have prompted federal and state officials to actually meet in order to coordinate their response. "You were all working together to anticipate needs," Haddow says. "You're all sitting in the same room when the things happened -- the Midwest flood, the Northridge quake, the Oklahoma City bombing and all the disasters we responded to. We were in the same room together and nobody had to point fingers."

Close coordination with state officials was key to the Clinton administration's capacity to act quickly in the heat of a disaster, Haddow says. "We had a really solid partnership, so we received solid, timely information from the ground. Then we managed that information and turned it into a mission assignment." In other words, when people on the ground needed something, they knew who in the federal government to ask, and when the federal government had extra resources at the ready -- cops from Chicago, say, or water from Wal-Mart -- it would know where to send them. Contrast that situation to what happened after Katrina, when both Michael Chertoff, the secretary of Homeland Security, and Michael Brown, the FEMA director, admitted to several reporters that they had no idea that people were starving at the New Orleans Convention Center, even though the grim scene there had been played and replayed on television all day.

The Bush administration's distance from local disaster-relief officials is by design. From the moment Bush stepped into office, he's been determined to move away from the coordinated state/local/federal disaster-relief approach used by Clinton. Instead, as Joe Allbaugh, Bush's first FEMA dirctor, told a congressional panel in 2001, Bush wanted to pull the federal government out of the disaster-relief business and aimed to "restore the predominant role of state and local response to most disasters." The federal government became even less involved in natural disaster relief after the 9/11 terrorist attacks, when FEMA's mission was shifted toward responding to terrorist attacks. In 2002, Congress created the Department of Homeland Security, and FEMA -- which Clinton had elevated to a Cabinet-level agency -- was made one department in the massive bureaucracy. As a result, although George W. Bush has a nickname for FEMA director Brown ("Brownie"), Brown enjoys far less clout under Bush than Witt enjoyed under Clinton, which Haddow says is an "incalculable loss of influence" for FEMA.

State and local disaster-relief officials have been complaining about the lack of federal involvement in emergency response for some time. Trina Sheets, the executive director of the National Emergency Management Association, which represents local emergency personnel, told Salon that "since the Department of Homeland Security was established there has been a steady degradation of the capabilities." Local officials protested earlier this year, when the Department of Homeland Security proposed an internal reorganization that would officially absolve FEMA of its disaster-preparedness functions and instead hand disaster relief to a new agency. Sheets says that her group has expressed its "concern" about the move in a meeting with Chertoff. Other local disaster-relief directors have been more critical. The day after Katrina struck New Orleans, Eric Holdeman, director of the King County, Wash., Office of Emergency Management, wrote an Op-Ed in the Washington Post denouncing the reorganization plan as a "a death blow to an agency that was already on life support." He added: "Those of us in the business of dealing with emergencies find ourselves with no national leadership and no mentors."

Of particular concern to local officials is the administration's increasing focus on terrorism to the exclusion of natural disasters. A recent report by the Government Accountability Office showed that "almost 3 of every 4 grant dollars appropriated to the [Department of Homeland Security] for first responders in fiscal year 2005 were for 3 primary programs that had an explicit focus on terrorism." More than $2 billion in grant money is available to local governments looking to improve the way they respond to terrorist attacks, but only $180 million is available under the main grant program for natural disaster funding, Homeland Security's Emergency Management Performance Grant program. The administration had proposed cutting that amount to $170 million, even though NEMA had identified a $264 million national shortfall in natural-disaster funding.

"We have testified before Congress countless times, we have sent letters to DHS, we have met with Secretary Chertoff as recently as three weeks ago, pleading for a balanced approach between terrorism and natural disasters," Sheets said.

And balance, Haddow agrees, is what's needed. "You gotta do both," he says. "You've got to fight terrorism." But you've got to respond to hurricanes and earthquakes, too. And when Bush declared a state of emergency in Louisiana on the Saturday before Katrina struck the Gulf, he made a promise to residents that he would respond, Haddow says. "People died because they couldn't get it right," he says. "People died because they didn't deliver on their promise."