Dennis Cooper's new book leaves behind the sex, violence and gore that made his reputation. Has the cult writer lost his edge? 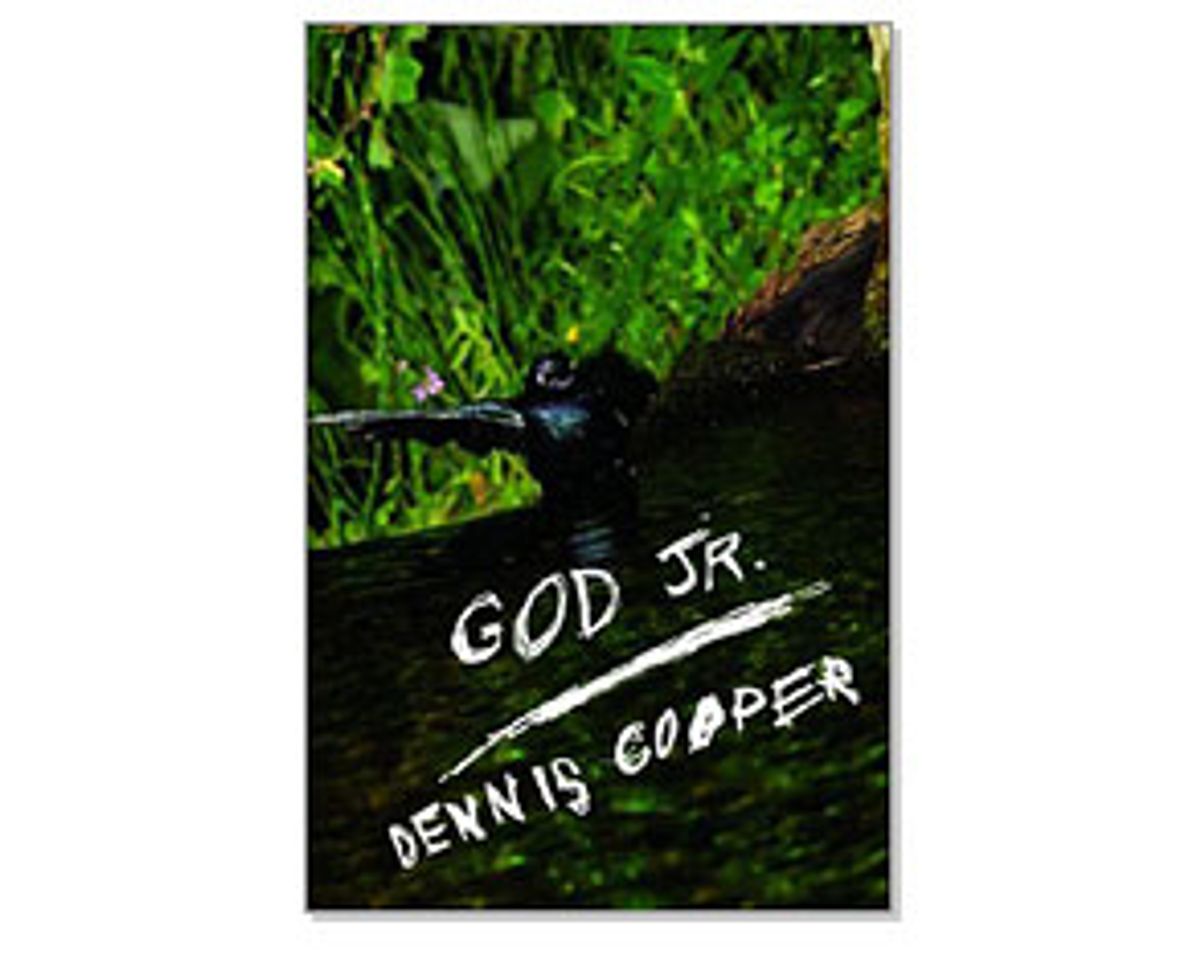 Dennis Cooper, possibly America's most subversive writer, is known for his fixation with violent gay sex, pedophilia and the dismemberment of lanky young boys by older men. This year marks a creative turning point for the literary renegade: While "The Sluts," published this past spring, showed us Cooper at his most graphic yet, his latest novel, "God Jr.," ushers in a PG-rated era for the writer. But can a cult hero put aside his sensational subject matter and find mainstream success?

Cooper's classics are 1991's "Frisk" and 1997's "Guide," both installments of the five-part George Miles Cycle, completed in 2000. Cooper has described the structure of the ambitious Cycle, inspired by and named for his mentally unstable high school love (Miles killed himself), as "a novel being gradually dismembered to nothing," with each book more abstract and episodic than the one before. The Cycle made Cooper's reputation as an incendiary writer, drawing comparisons to Burroughs, de Sade and Bataille -- and attracting a frightening number of lean, very young male followers who sit at Cooper's readings holding hands and occasionally mail him nude photos of themselves. Both "Frisk" and "Guide" feature painfully explicit scenes of sexual torture and murder: In "Frisk," a young hustler is beaten, raped, hung from attic rafters and cut wide open; in "Guide," a dwarf porn actor eviscerates and sodomizes a 14-year-old. Cooper's hipster status and droll deadpan humor aside -- set mainly in Los Angeles, his books take digs at trendy indie rock bands, stoners and artists -- his writing packs a shock that a number of "edgy" university symposiums devoted to the author has yet to dull.

At their best, Cooper's novels transcend the gore to become surprising, moving works of literature. This is because Cooper's art resides not only in the extremes but, incongruously, in a kind of hopeless romanticism -- as if the ghost of Miles, his frail and ultimately unknowable love, were hovering over him still. At the heart of both "Frisk" and "Guide" is a message that's twofold, and tragic: We have to live with the fact that some of our most deeply rooted fantasies can never be fulfilled in reality, and that those fantasies may represent the worst part of us. Cooper's scenes of brutalization -- sometimes carried out by dark characters, but more often with smoke and mirrors, the vivid rendering of the protagonist's inner life -- are ultimately about the desire to know another human being, to own him so completely that you can hold his insides in your hands, and hunt for meaning in that person's most private parts.

The bleeding of fiction and fact is signature Cooper, a master of metafiction. In "Frisk," for instance, the narrator "D." recounts, in vivid letters to a former boyfriend, his sex-fueled murders of a number of local prostitutes -- only for the reader to learn that the whole alarming exchange was a put-on. In "Guide," the narrator is a writer with a cult following who harbors dreams of mutilating young boys -- and, incidentally, his name is Dennis. Cooper has said, both as the protagonist Dennis and in interviews, that he blurs the line between his life and his fiction for impact, and he recognizes these distressing fantasies as deriving from his childhood fascination with a group of boys who were found raped and murdered in the woods near his home in the San Fernando Valley. This merging of Cooper and his characters has created a warped mythology around not only the work, but also the author himself. The man has a reputation. This author knows a handful of hip, urban-sophisticate types -- writers, editors, painters -- who, in spite of their respect for Cooper's work, steer clear of him for fear of being drugged and lured into a scene out of "Caligula."

Considering his fierce brand of underground celebrity, it was fairly monumental when Cooper announced this past spring that "The Sluts" would be his final foray into sex and gore -- a sort of last, black hurrah. The book, headed to paperback this October, would make fans of "The 120 Days of Sodom" blush.

Written as a long string of review postings on an L.A. male-escort Web site, "The Sluts" maps out a new genre of fiction: the preteen hustler mystery novel. The postings from the johns, known only by their Web I.D.s, paint a portrait of "Brad," an elusive and deeply troubled 14-year-old (of course) prostitute who becomes the toast of the Web as "the hottest, sweetest little ass," an "A+++++." As older men begin to compete for time with the disturbingly submissive Brad, it becomes increasingly unclear who this boy is -- and how dangerous he may be. But while this structure lends a terrific suspense to the first third of the book, it devolves into self-indulgent slasher porn in the pages that follow. When Brad's self-styled guardian Brian announces online that Brad has decided to allow clients to indulge in radical torture sessions, set to culminate in his death at the hands of the most hardcore client, things get really, really ugly. Ugly enough to make "American Psycho" read like E.M. Forster. For instance: At one point, a john describes, with relish, the process of castrating Brad and force-feeding him his own testicles.

Just months after "The Sluts" comes "God Jr.," in which Cooper, as promised, abandons what he calls the "sex and violence axis." It's a PG-rated affair, with zero sex and lots of straight suburbanites. No more screwing and slicing up of waifish preteens -- in fact, there are few kids present at all. In "God Jr.," a middle-aged suburban couple, Jim and Bette, deal with the sudden death of their teenage son Tommy by smoking pot, avoiding physical contact, and playing lots of Nintendo. Jim devotes himself to building a monument to their son in the yard: a re-creation of a strange tower Tommy drew repeatedly in his notebook. As Jim learns, Tommy actually copied the building from a Nintendo video game, and he begins to play obsessively, trying to learn something about his son beyond his love of pro skater Tony Hawk and getting high.

The premise of the book feels forced -- Jim's predicament in particular: Out of guilt from having been the driver in the car accident that killed Tommy, Jim has unnecessarily committed himself to a wheelchair and works at a custom tailoring shop that only employs the physically and mentally disabled. This subplot featuring Jim's co-workers' high jinks is strained, with an absurdist humor that rings false: The shop is called, with ironic cuteness, Little Evening Out, and was founded by a one-legged Vietnam War veteran. Days at the shop are punctuated by learning-disabled Marianne's calls to the local radio station to request songs by the Eagles. This self-conscious cleverness pops up throughout "God Jr.": Nintendo sends a representative to determine whether Jim's monument is an act of artistic appropriation (and therefore legal) or a form of copyright infringement; Dateline NBC wants to run a segment on the Tommy tower, after a local-color piece in the Times describes it as "a giant piece of inedible candy." Like the lawn monument, these moments are patched together, and not entirely original.

The absent Tommy fulfills Cooper's central role of the unknowable teen, a kind of stoned stand-in for the mysteries of youth, a boy whose interior life is inaccessible to adults. But this device succeeds when we're given a protagonist whom we do get to know -- as with "Guide's" Dennis, defined both through the company he keeps and his vivid, shocking fantasy life. Unfortunately, in this already too-slim book (163 pages of large typeface), we learn very little about Tommy's parents. What did Jim do with himself before he became "disabled"? What was Jim's relationship with his wife before their son's death left them estranged and perpetually exhausted? Jim describes the daily routine: "Bette pushes my errant wheelchair to the couch. She holds me by the belt loops, then slides my ass from the cushions into its more unstable seat. It's hard for her because I used to be a horny, jogging, gym-addicted jock." It's a harsh, efficient description of their grim domestic scene. But the world of "God Jr." has a void where all that sex and violence used to be: That high-stakes tension is gone, and the clock-punching and gaming of a middle-aged Everyman are no substitute.

Yet, there is innovation in "God Jr." Take the fragmented, stoner-logic passage in which Jim imagines himself transformed into a pixelated bear within the world of Tommy's video game. Suddenly, as the bear player, he can speak to the animated ferrets and magical talking plants and discover secret levels and treasures buried deep within the game. While much of the novel lacks the slur and pop of his typically teenage cast, Cooper finds in the game's innermost dimensions a surreal, quasi-mystical new voice -- as when one of the animals first speaks to Jim: "'You're Jim,' says the ferret. 'Father of Tommy. Uncertain bear. Liar. You want to know what I recall about you when you were your son. And maybe something else.'" Cooper finds a lyricism in the bizzarro video landscape: "We land squarely on a corrugated terrace. It's smeared with buttery moss and some tiny stained-glass lamps that the bear recognizes as flowers. Two stylized paw prints, evidence of some larger bear or passing Yeti, face a gargantuan tropical plant that someone or something dressed in thrift-store castoffs like a scarecrow."

Jim interrogates the animals about his son, eager to find significance in Tommy's fixation with the game -- he wasn't just another high school burnout with a Nintendo habit, was he? The plant says that Tommy used to leave the game on "pause" for long stretches of time, more interested in staring at the screen than playing, and this induced in the fantastical creatures a sort of crisis:

"First, you need to understand something," says the plant. "The bear is the bear. Your eyes are one degree livelier than the pattern on a teacup. You walk, you trot. You kill, you solve puzzles. There's just not a lot to you ... That said, I'll tell you this. Tommy spent weeks and weeks right down there doing nothing ... We began to speculate. Why is the bear still here? He had no answers to give us, so we thought about ourselves. Why are we still here? Theories abounded ... [T]he questions got mystical ... [T]he consensus here is that Tommy bear was God."

Much like Jim's bleak hope for a message hidden within his son's average-teen behavior, the virtual animals see "God" in Tommy's bored gaming breaks. Here "God Jr." becomes recognizable as Cooper: An existential puzzle, the book is ultimately about surfaces, and the futile search for something meaningful underneath.

If this novel is not Cooper at his best, it's an unavoidable step toward breaking out of the sensational corner he's painted himself into. After all, how many great novels can someone write about raping and dismembering boys? As the cold and two-dimensional "The Sluts" proves, Cooper can find little more to mine from this terrain -- he's run that obsession into the ground. "God Jr.," while slight, should be recognized as a bold move: One of our most fearless authors is struggling to see what's left of his voice once the flash and gore have been peeled away. Unfortunately, he still has a long way to go.